Sensational Salah! Liverpool frontman star of the show again as he bags brace to help Reds maintain 100 per cent start to the season

David Luiz spun on his heels and immediately began to jab his finger in the direction of the assistant referee in front of the Sir Kenny Dalglish stand.

It was 61 minutes into a significant day for Arsenal and Luiz wanted to know why a flag had not been raised quickly enough to halt a Liverpool attack. All very good, you may think. Luiz had signed from Chelsea to provide leadership and direction to Arsenal’s habitually porous back four.

If Luiz was hoping to cover his tracks with overt gestures, he failed miserably. This pantomime kidded nobody in the stadium. There was a reason the scoreboard in the far corner of the stadium read ‘Liverpool 3 Arsenal 0’ at that point and Luiz could not hide his culpability. 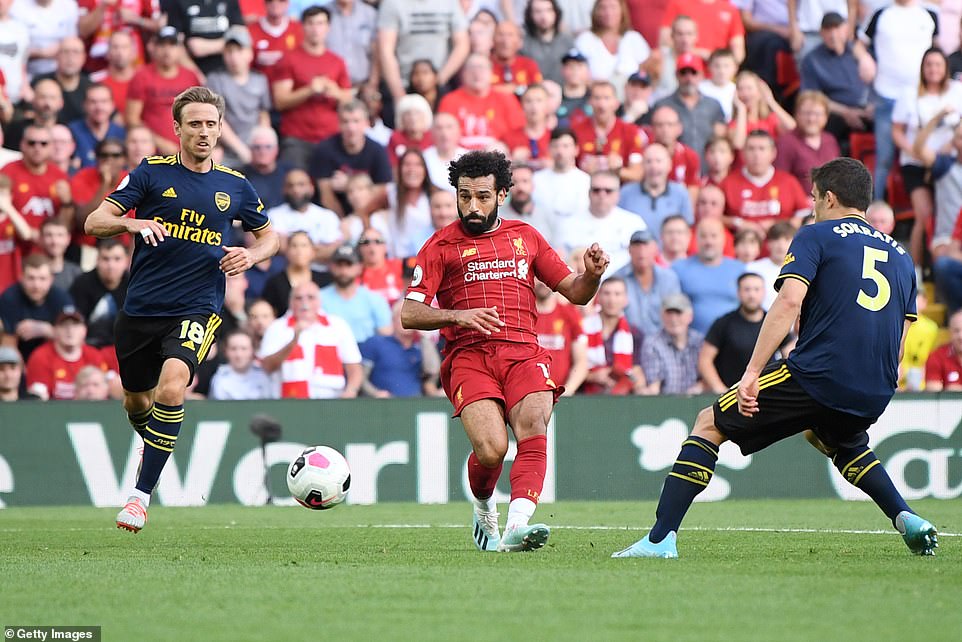 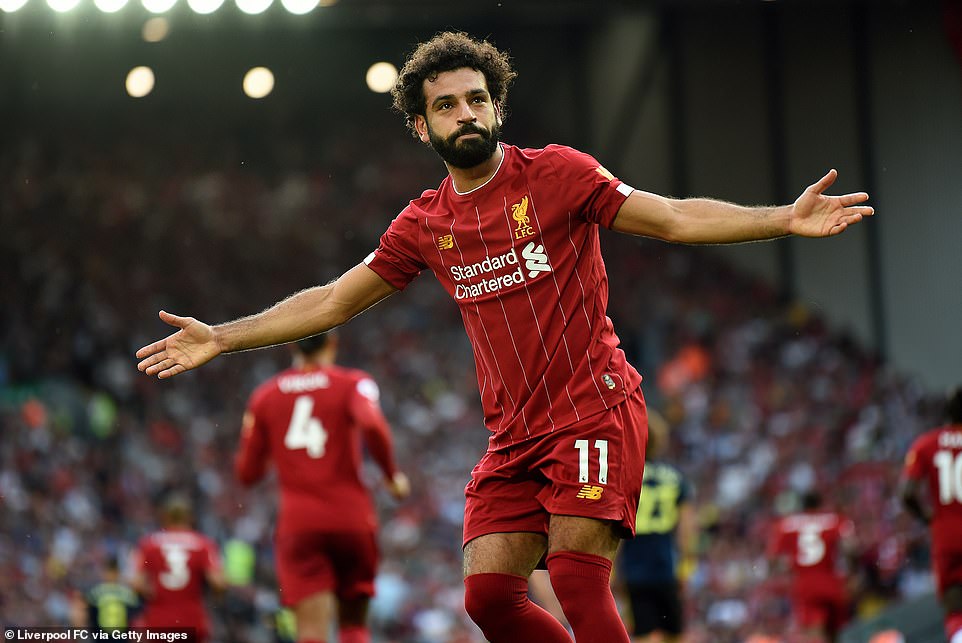 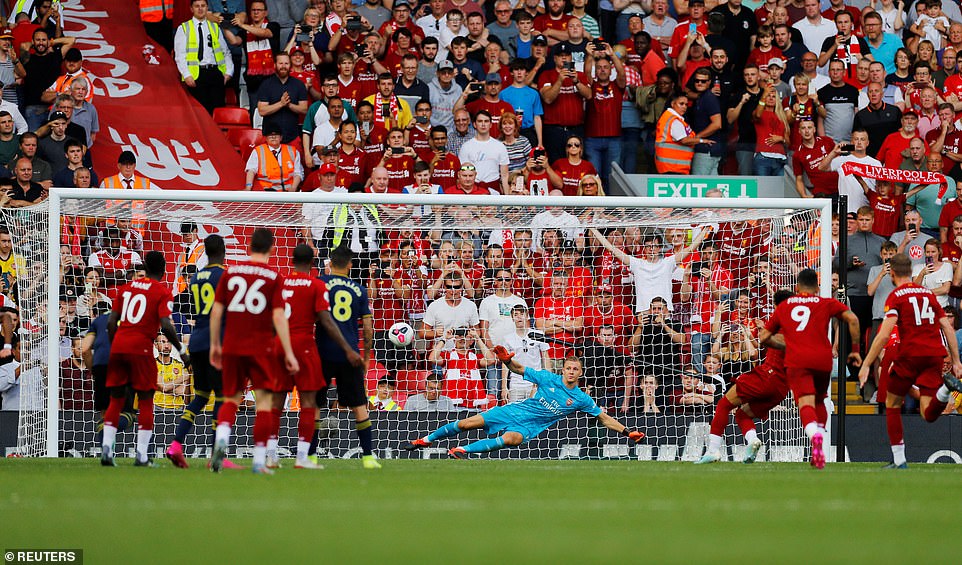 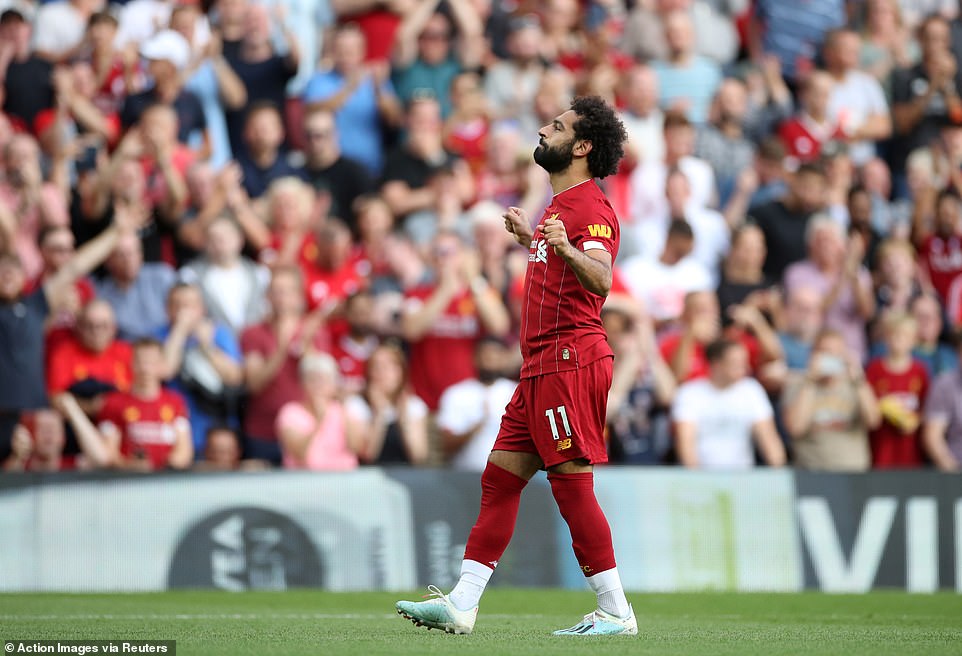 We will look in greater detail, in due course, at Liverpool’s vibrant attacking and a performance that preserved their perfect start to the campaign but it cannot be overlooked how Arsenal – and Luiz – played a major role in their own downfall.

Luiz was supposed to bring steel to Arsenal’s backline when he swapped Stamford Bridge for the Emirates Stadium but he took leave of his sense on Merseyside, conceding a penalty that changed the course of the game before a fatal moment’s hesitation allowed Mohamed Salah to ransack him.

Liverpool have made a habit of demolishing Arsenal at this stadium but this latest instalment was actually closer for a spell than the score would lead you to believe; indeed, had Nicolas Pepe possessed the killer instinct of a man with a £72million price tag things could have been different.

As it was, Unai Emery found himself in the familiar position of losing a big Premier League game. Any hopes that Arsenal supporters may have started to harbour after opening up with two wins must be tempered. Liverpool, ruthless and powerful, exposed their shortcomings.

You can tell when Liverpool are reaching their best by how they start matches and the tempo they set from the first whistle was clearly to Klopp’s approval. The passing was sharp, the pressing was intense and the only thing missing from their early domination was a goal.

It wasn’t for the want of trying. There were only 80 seconds on the clock when Liverpool’s first opening arrived but Roberto Firmino, scorer of a hat-trick in this fixture last December, failed by a fraction to get his toe to Andrew Robertson’s fizzing cross.

Klopp was not the only who liked what he saw. In the fifth minute, The Kop was roaring as Liverpool’s attack hemmed Arsenal’s defenders onto the byline and Sadio Mane hurtled into dispossess Ainsley Maitland-Niles, who looked taken aback by the Senegalese’s intensity. 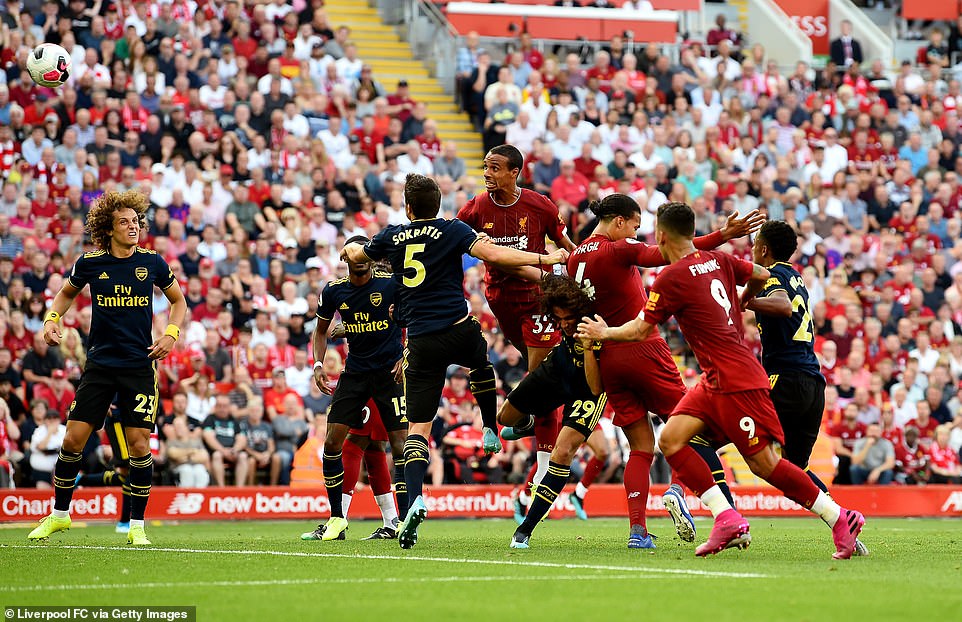 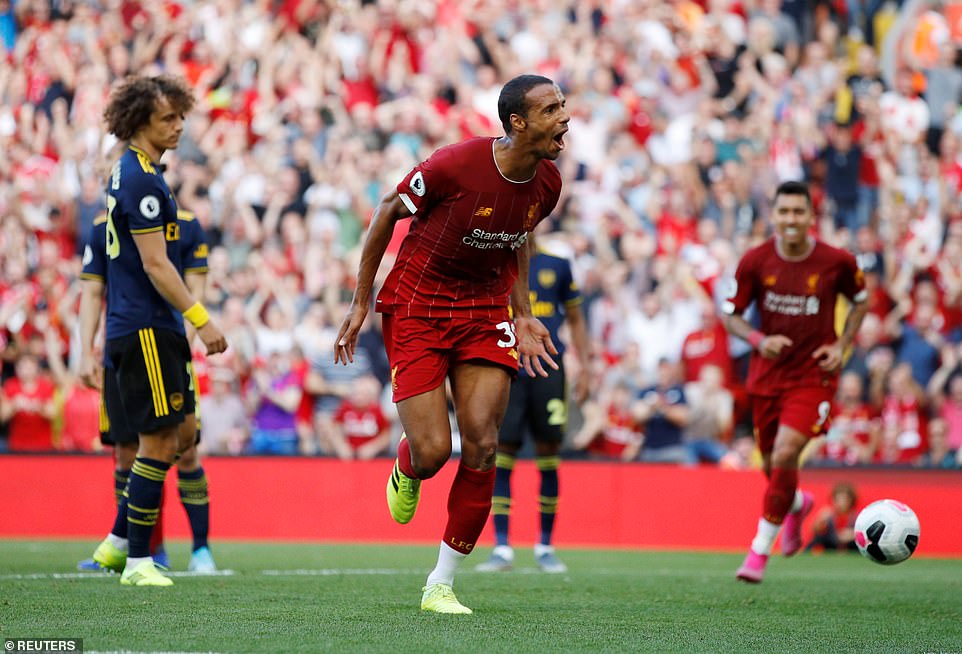 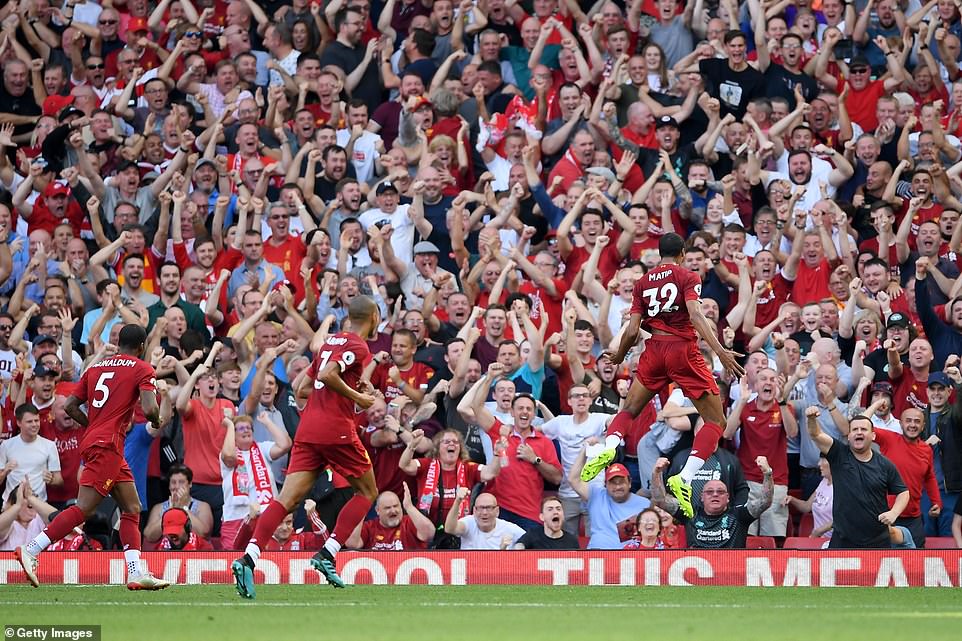 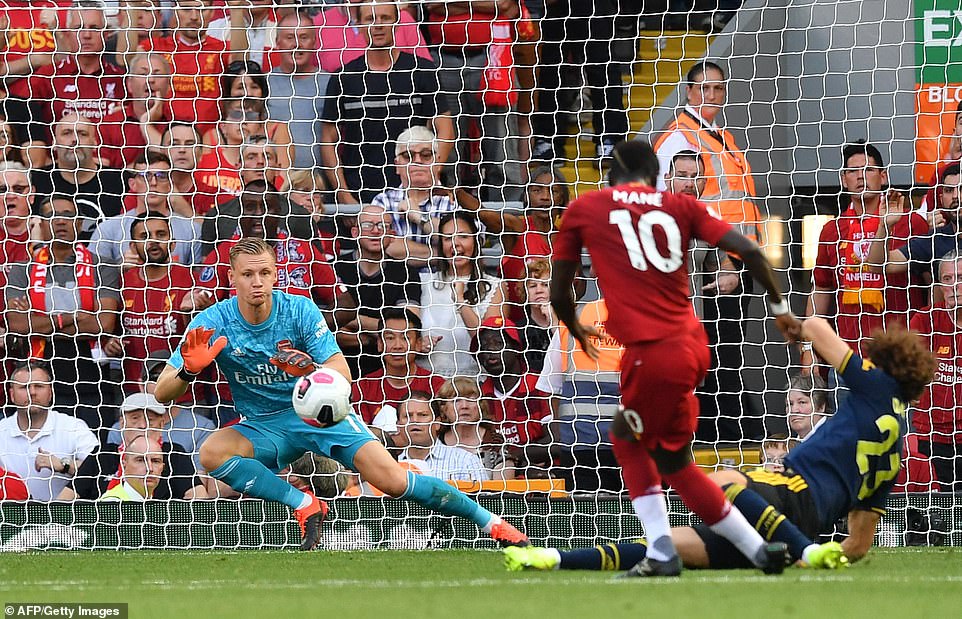 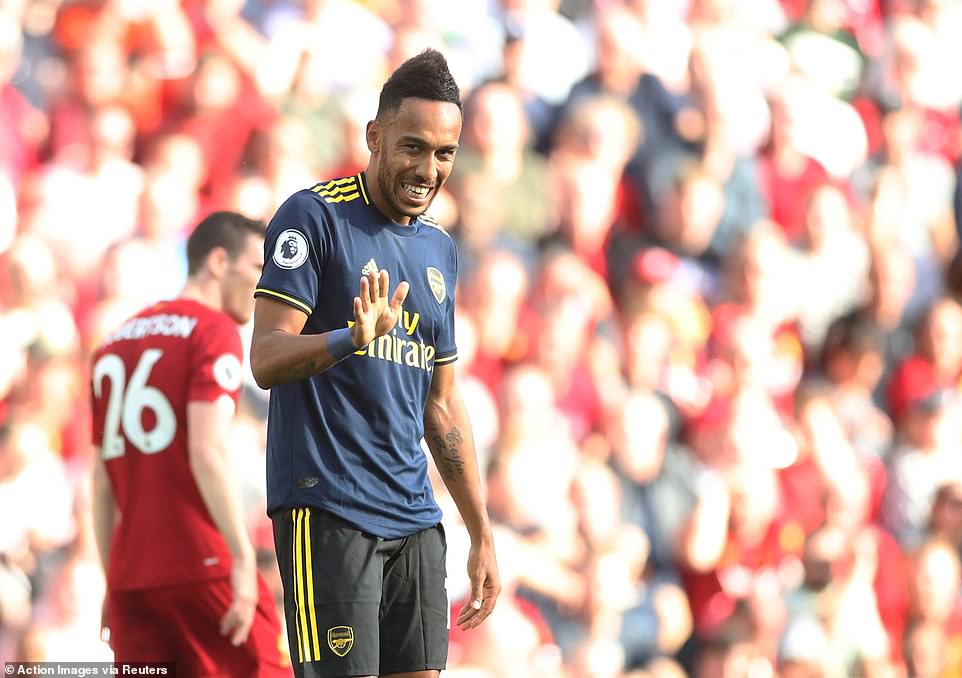 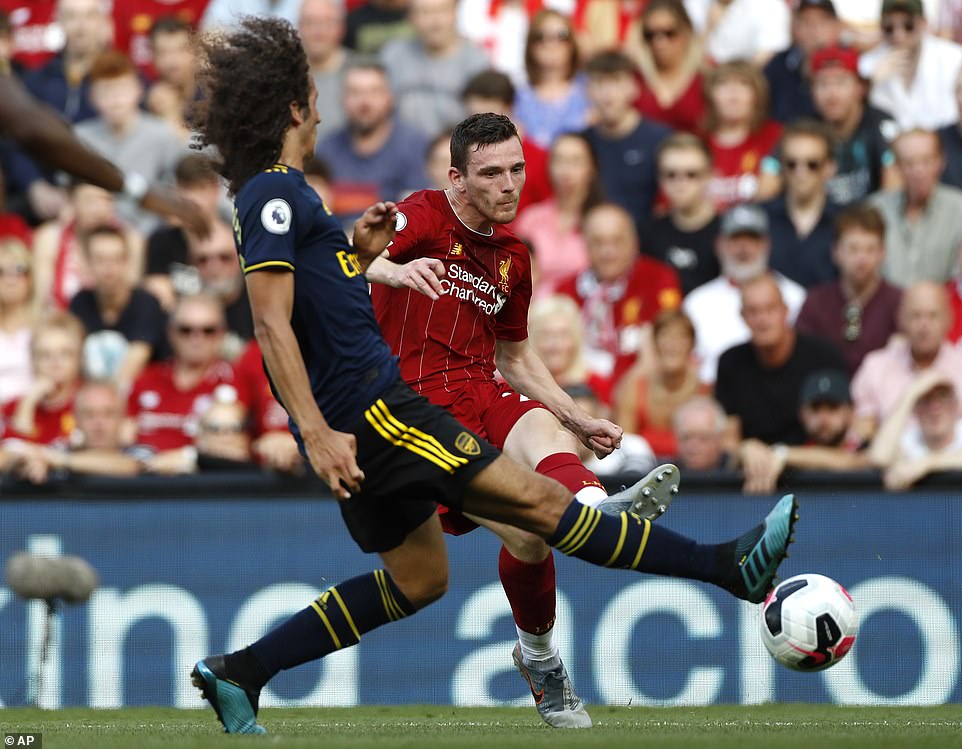 32 minutes: VAR makes its first appearance. Referee Anthony Taylor has a check for an off-the-ball incident involving David Luiz and Mohamed Sala. After two minutes came the verdict – nothing untoward. Play continues with a corner to Liverpool. If Luiz had been found guilty by video, it would have been a red card.

48 minutes: VAR had to be used after Mohamed Sala was pulled back by Luiz. Penalty. No video needed by referee Taylor for the decision, just the formality of confirmation from VAR required after every goal.

59 minutes: again a customary check after a goal as Salah left Luiz gasping and helpless on the touchline as he accelerated through for Liverpool’s third. Arsenal manager Unai Emery might ask for a copy to show his players how not to defend against pace.

87 minutes: Taylor calls on VAR for a handball check in the Liverpool penalty area. Liverpool given the all-clear.

Had Liverpool landed a telling blow in those opening exchanges, they may have done significant damage to Arsenal but, to their credit, Emery’s players knuckled down. This, without question, was a significant improvement on the flimsy way they capitulated on their last visit.

They had their moments, too. In the 11th minute, a misjudgement and poor clearance from Adrian ended up at the feet of Pierre-Emerick Aubameyang but his instinctive lob lacked the direction to exacerbate the Spaniard’s error.

That opportunity was the trigger for Arsenal’s best spell of the game and the two players who stood out most were Joe Willock, the England youth international and Nicolas Pepe, whose scintillating pace had Liverpool’s defence on edge.

Willock, who looks certain to be elevated into the first England Under-21 squad of the season, was particularly vibrant and one scurrying run from deep took Liverpool by such surprise that it required Firmino to surge back and make a significant intervention.

A better opening followed in the 34th minute and this had lasting ramifications. When Jordan Henderson failed to control a ball inside Arsenal’s half, Pepe pounced and charged forward on his own, mugging Robertson with a glorious piece of trickery.

Faced with the opportunity of beating Adrian, however, Pepe’s touch was suddenly not so sure and as Henderson ran back to apply pressure, the Ivorian shot weakly and Adrian saved; Henderson tidied up the mess, much to Klopp’s obvious delight. Such mistakes do not go unpunished. 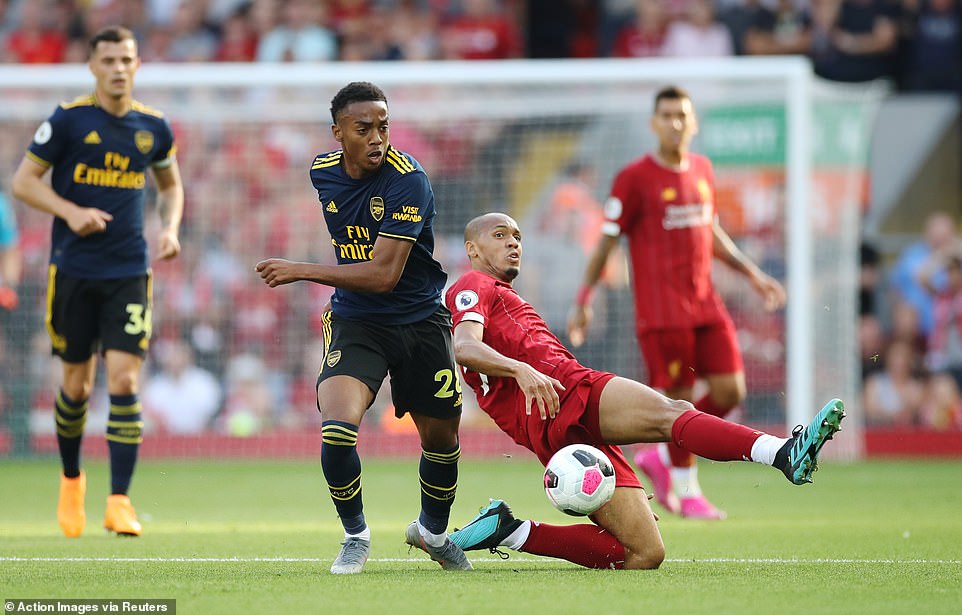 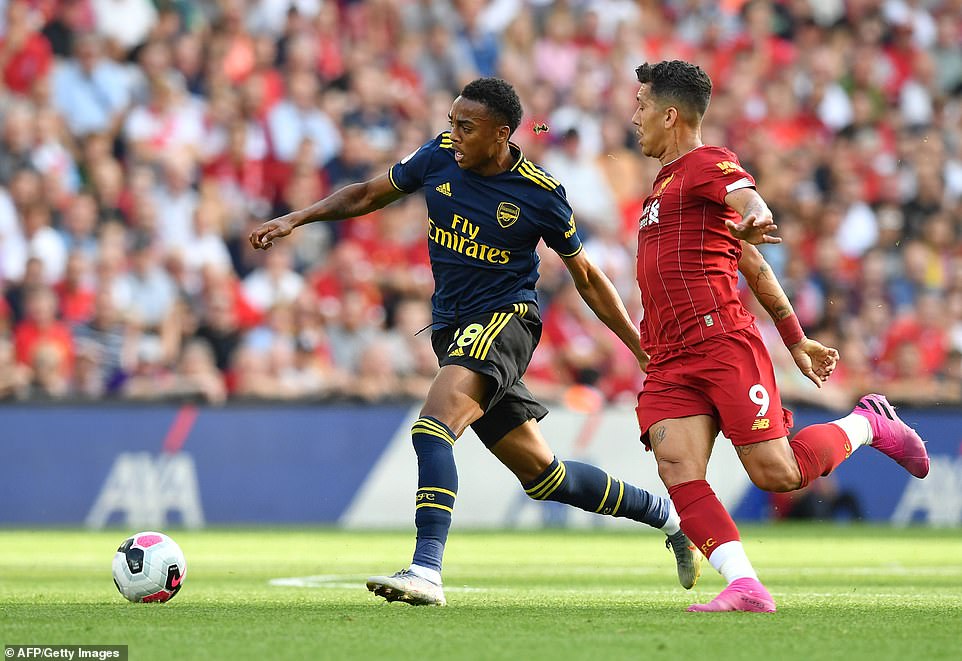 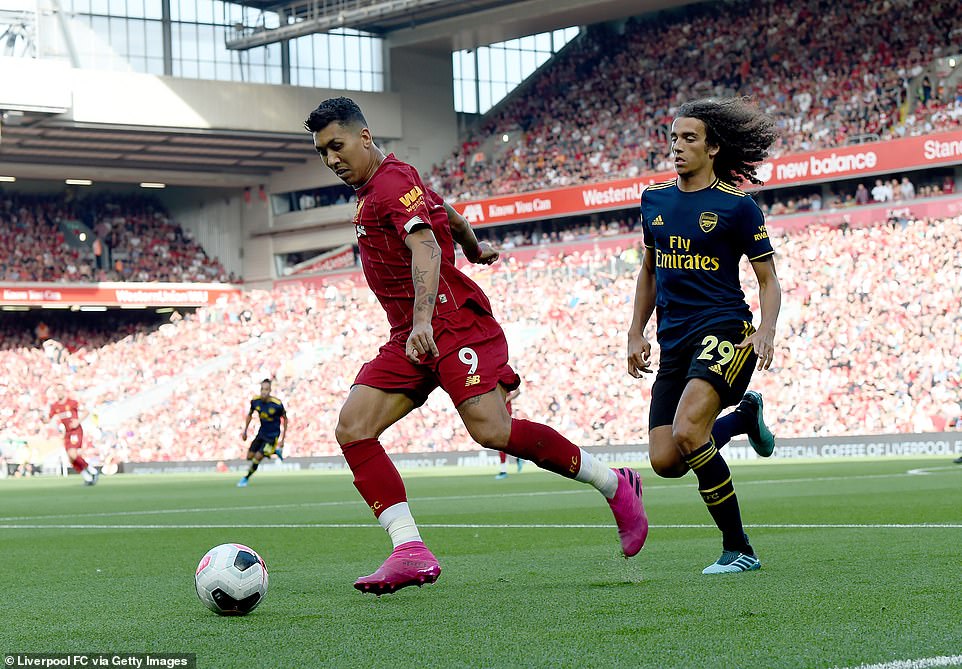 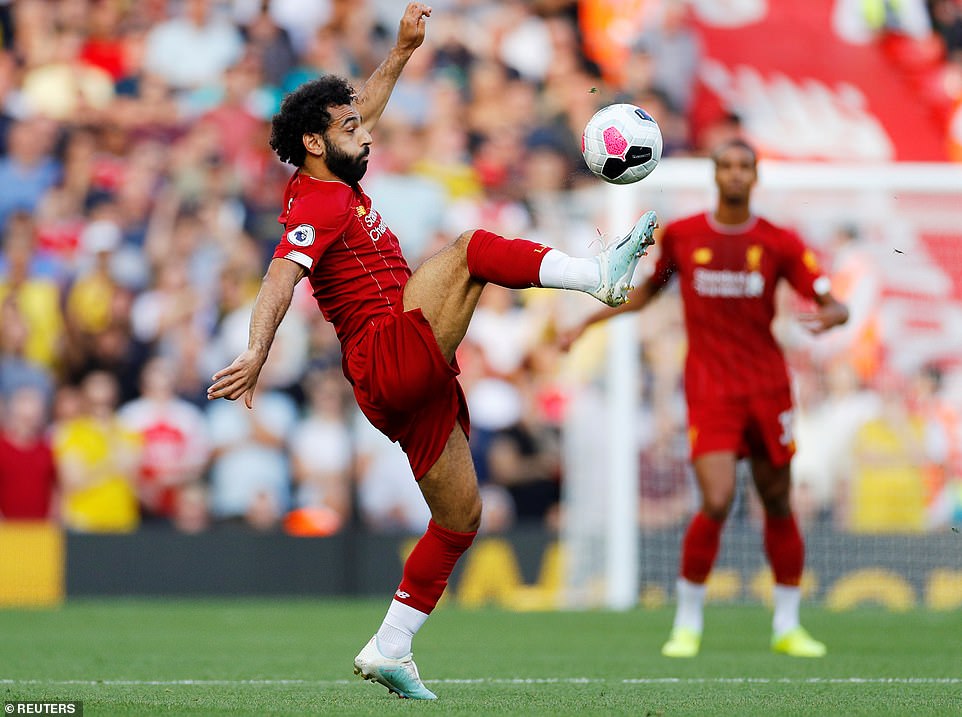 Liverpool forward Mohamed Salah, who had a relatively quiet first half for his standards, attempts to control the ball 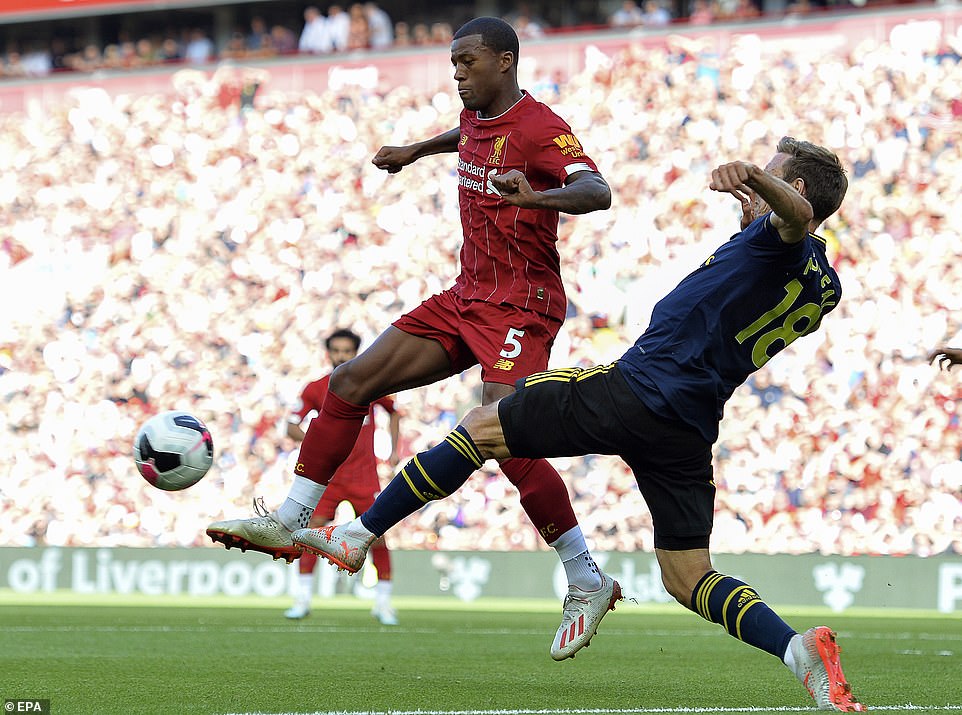 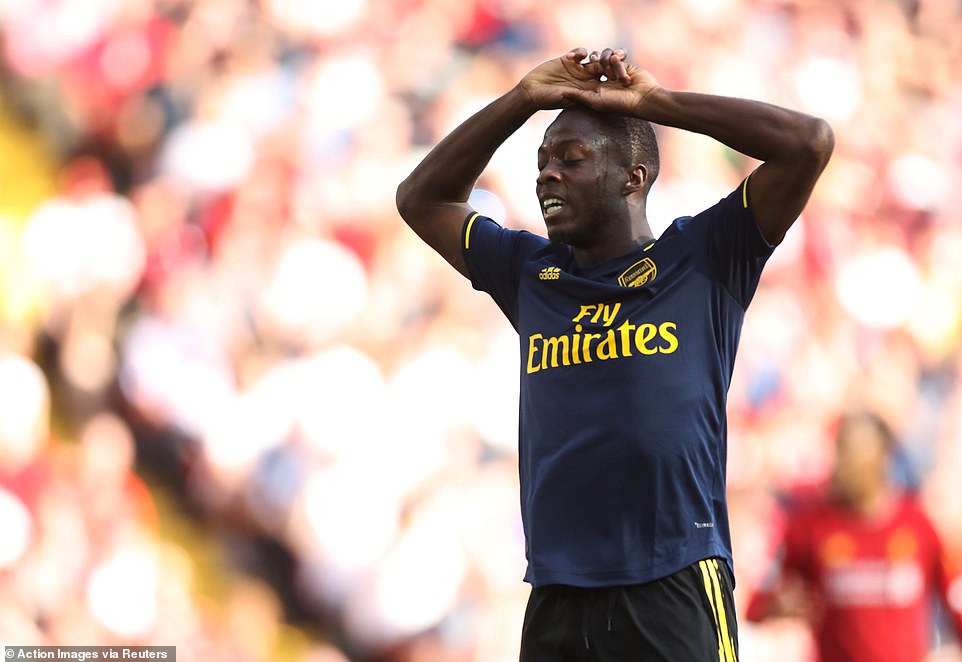 Just before half-time, Liverpool took the lead. A superb outswinging corner from Alexander-Arnold picked out Joel Matip and the Cameroon defender planted a header into the roof of The Kop net. It was an advantage they never looked like relinquishing.

In the opening 15 minutes of the second half, they were outstanding; quick and strong, all parts of the team moving in perfect synchronicity, they started to look like the champions of Europe. They had far too much class.

Luiz, of course, helped them get their second goal. His shirt pull on Salah, which led to Liverpool’s penalty, was absolutely ridiculous and the Egyptian gleefully took his opportunity, swishing his spot kick high in Bernd Leno’s top corner.

There was better to come. Fabinho, such an unsung but crucial member of Liverpool’s team, played a ball to Salah on the halfway line in the 58th minute and with one deft touch, he danced away from Luiz and sprinted into the area before applying a glorious finish with his left foot.

The only blemish on Klopp’s day was the needless consolation they allowed Arsenal to pilfer in the 86th minute, when substitute Lucas Torreira fired in through a crowded penalty area. Really, though, it was a day to leave Klopp purring. For Luiz and Arsenal, on the other hand, old clumsy habits die hard. 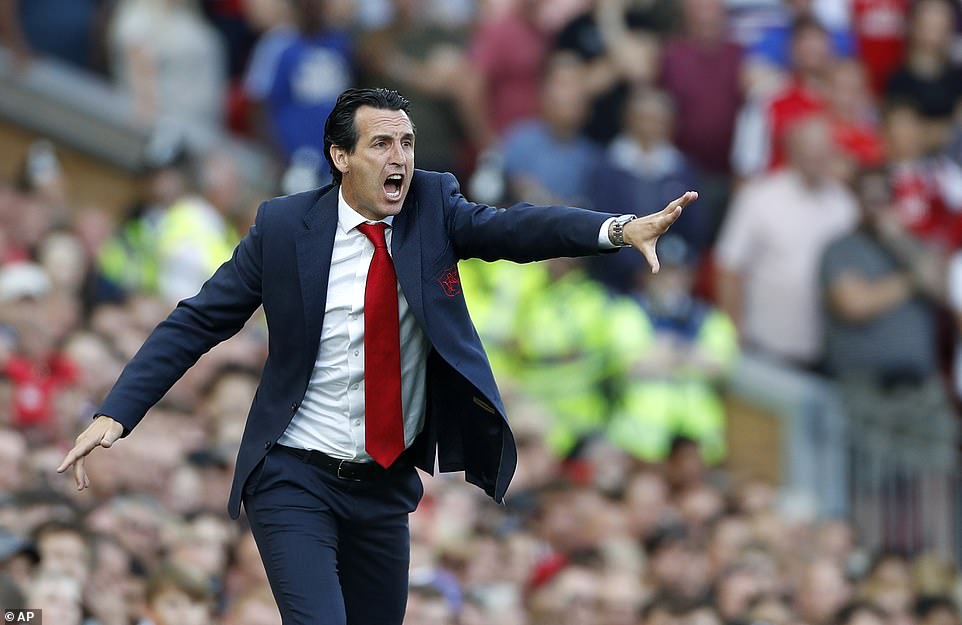 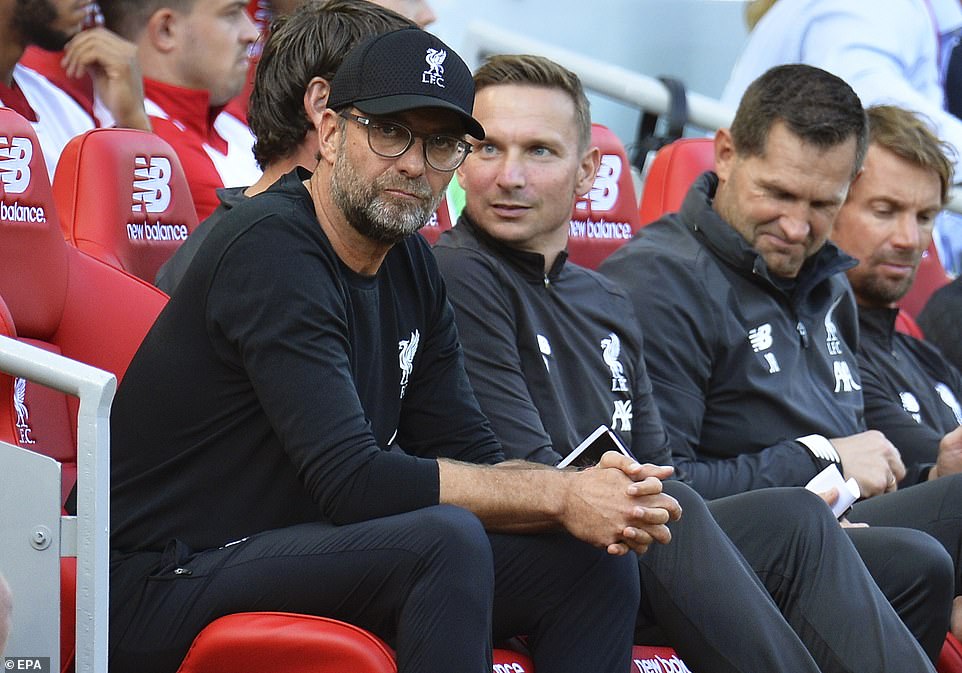