For much of the first half at St Mary’s this was a day for the Manchester United old boys. There were songs for idols of yesteryear – Eric Cantona, Matt Busby, even Robin van Persie. Then, after 10 minutes, the travelling jukebox repeated their new take on on an old classic.

If Ryan Giggs used to tear you apart, United fans want you to know that Daniel James is the heir to his throne. They are big shoes to fill. But the 21-year-old is making quite a fist of it already. Here his third goal in four games – a fine strike from just inside the box – put United on course for a much needed three points.

Yet for all the promise in Ole Gunnar Solskjaer’s new breed going forward, old frailties continue to haunt them 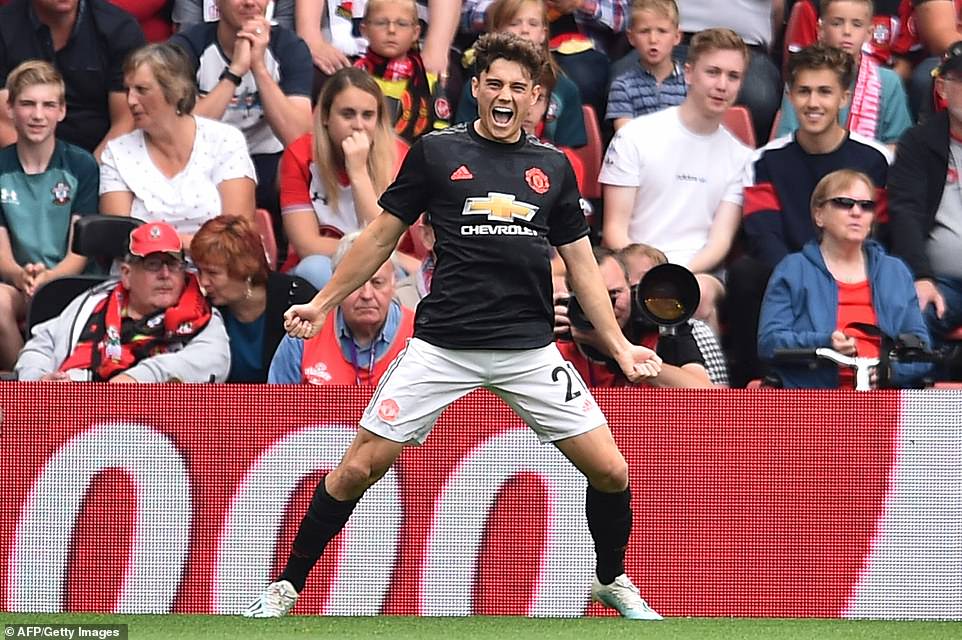 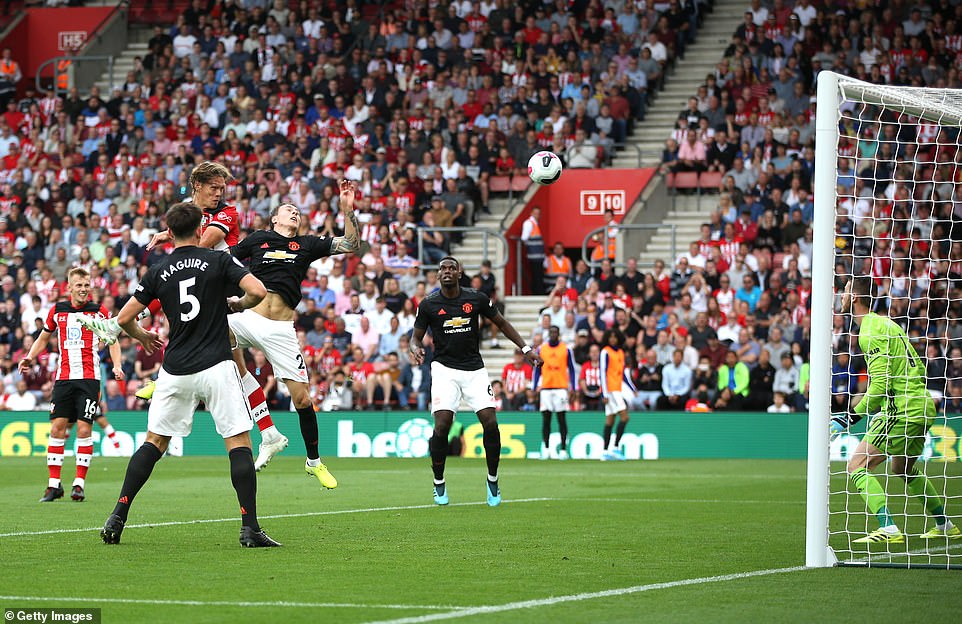 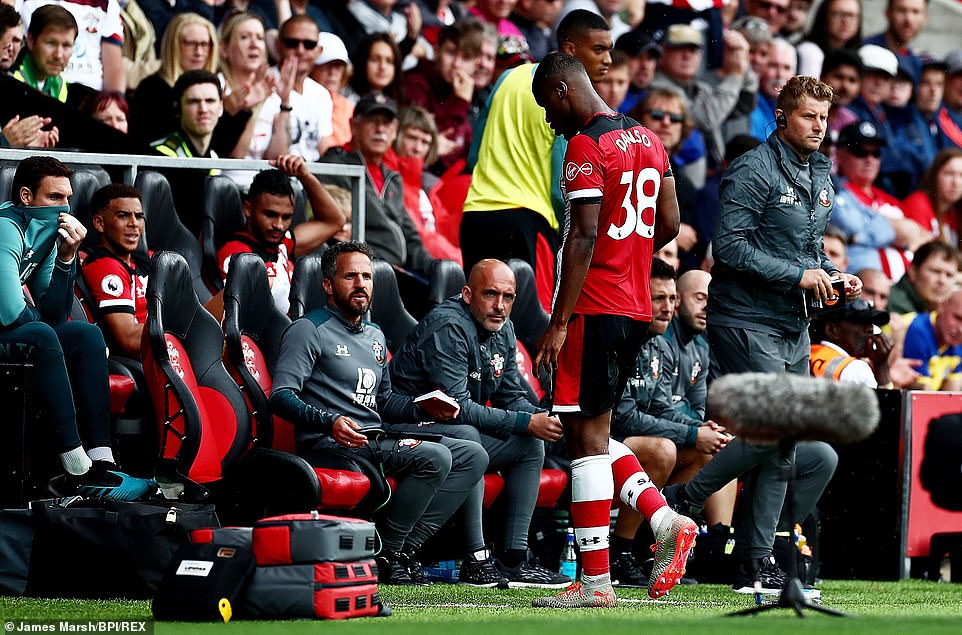 Harry Maguire was signed for £80million to shore up United’s back four. There was nothing he could do, though, to prevent the 6ft 5in Jannik Vestergaard rising above Victor Lindelof to score his first goal in English football and earn a share of the spoils.

Even after Kevin Danso was sent off with 18 minutes to play, United failed to turn the screw.

James’ shot was beaten away by Angus Gunn before the keeper dived to keep out Mason Greenwood’s curling effort. He could only watch Ashley Young’s looping shot whistle past his post.

So no win in eight away games now for United and just one clean sheet in their last 15 Premier League away days.

Had there been no summer break in the middle of this run, the alarm bells would be ringing even louder than they are. 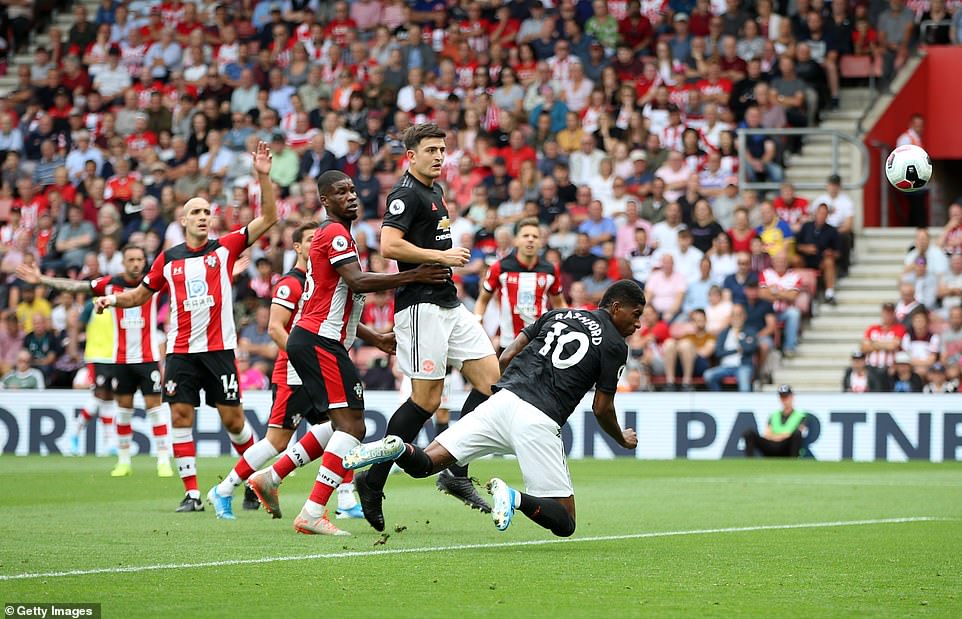 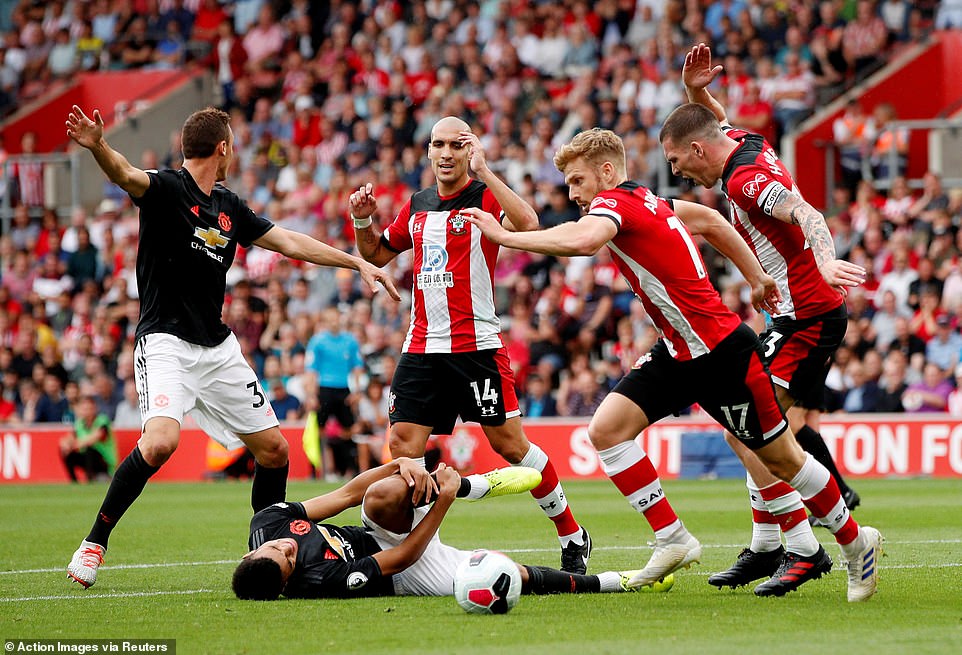 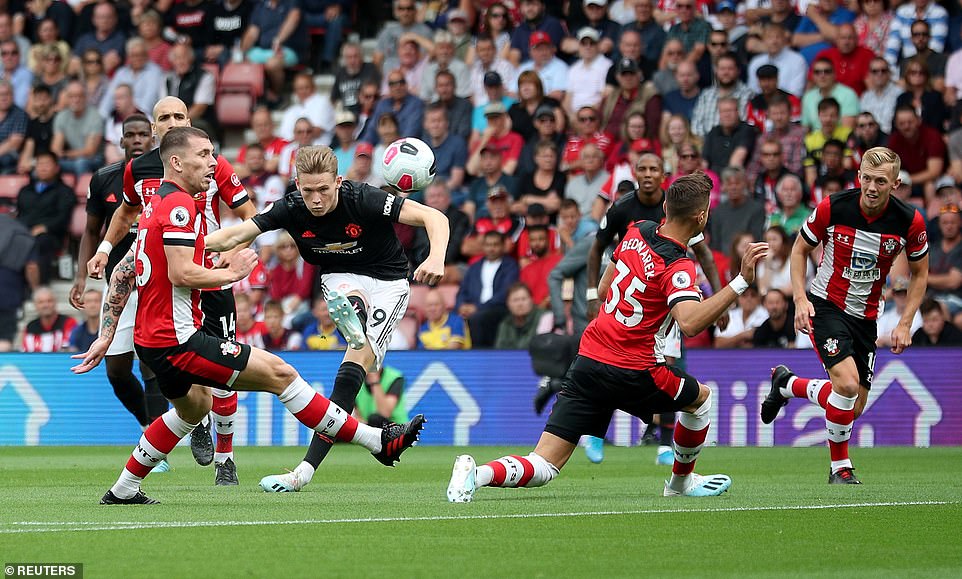 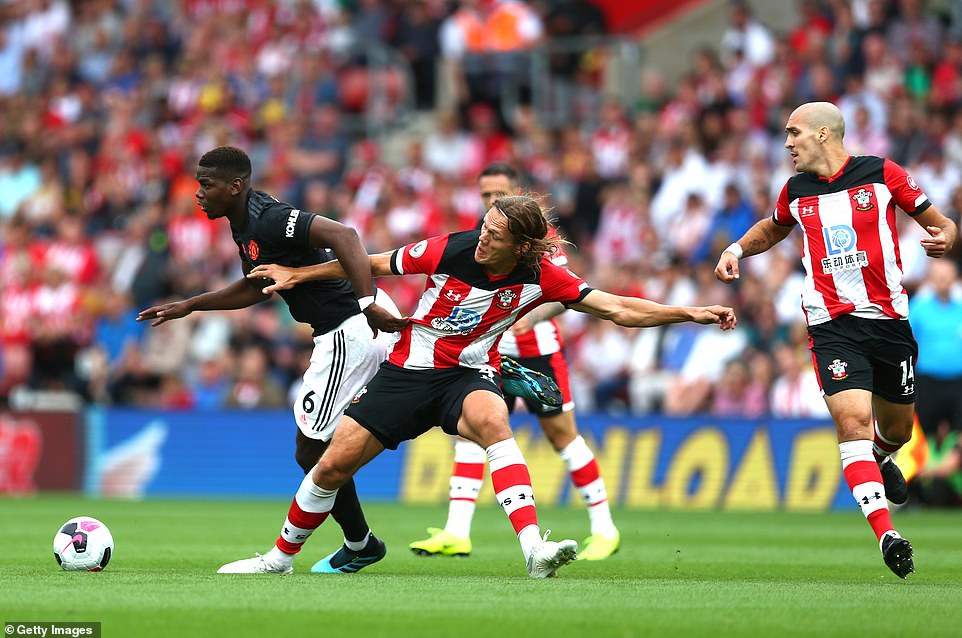 Since victory over Paris Saint-Germain in March, they have won just three of 16 games in all competitions and none away from home.

In the meantime, there has been a certain masochism surrounding the Old Trafford club. Solskjaer has been lauded by some supporters for ridding the squad of so much dead wood. But these are strange times if self-harm is cause for celebration. Even the United manager has admitted his squad is now a striker short following the departures of Romelu Lukaku and Alexis Sanchez.

They may not be missed by many for now, but before kick-off United fans toasted Van Persie.

It was a sign of a gratitude for his fine spell at Old Trafford, but also a timely remember of happier times.

Four years after his departure, a glance to the United bench – and the attacking options of Jesse Lingard, Greenwood (17) and Tahith Chong (19) – told its own story.

Of course, all that would be white noise if they had held on to their first-half lead. 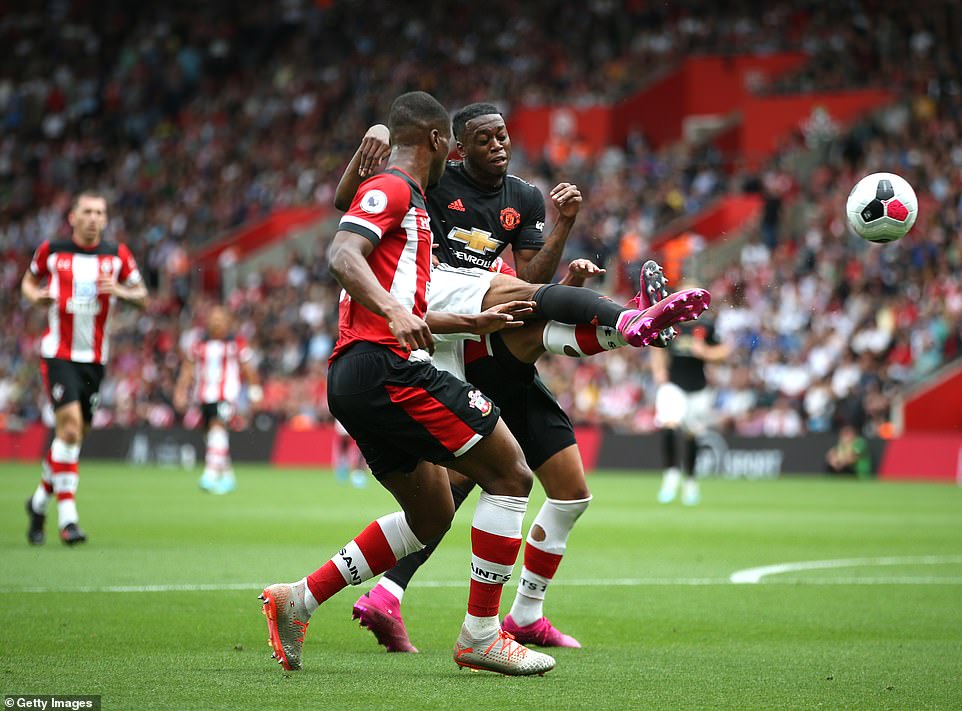 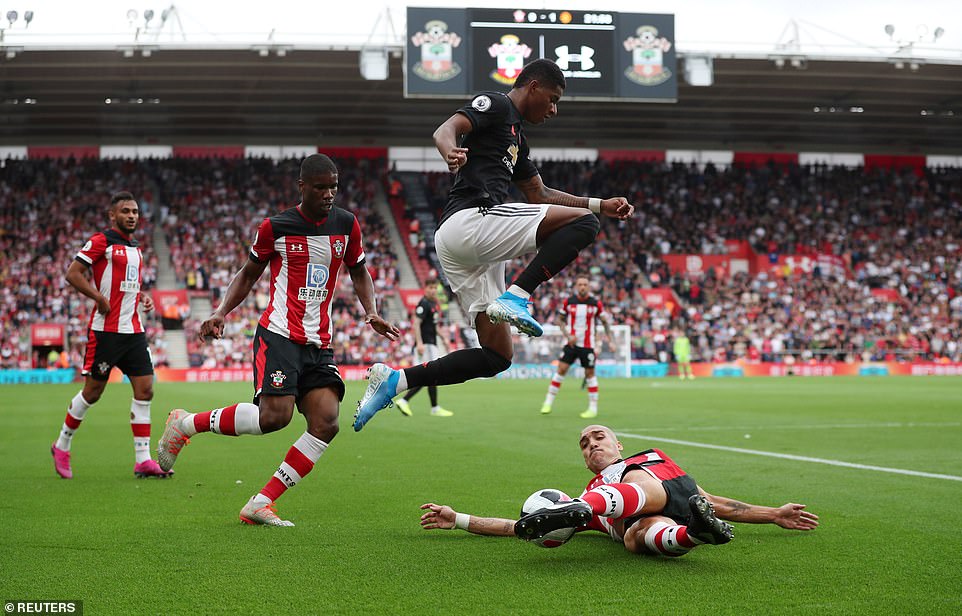 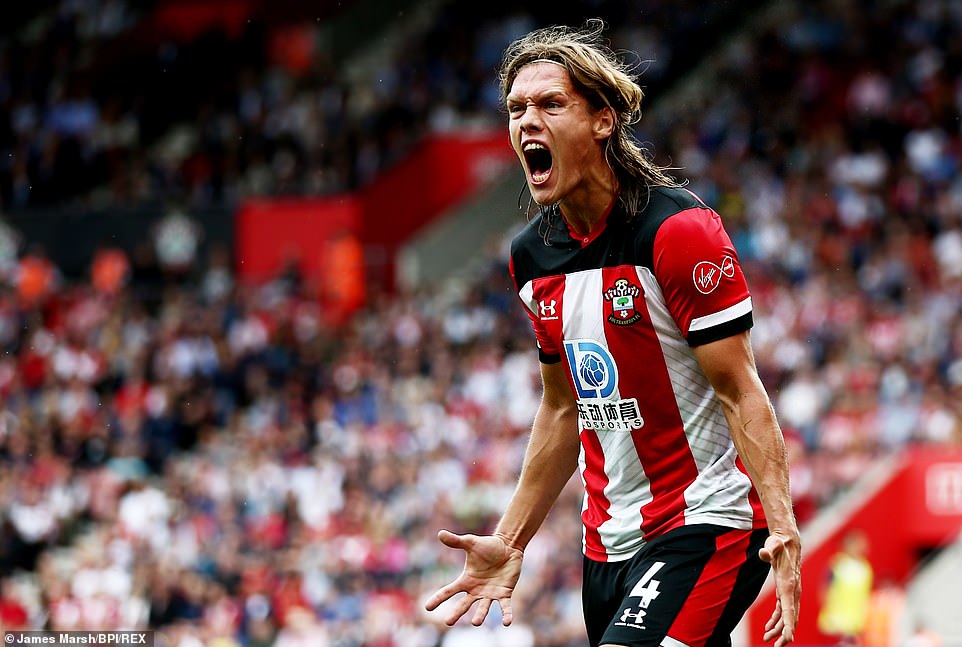 United had started sloppily until James picked up the ball on the left hand side. The 21-year-old was allowed to drive into the box where Juan Mata’s intelligent run drew the attention of Cedric and gave him the chance to cut on to his right foot. James took the invitation and fired the ball into the far corner.

At the other end, meanwhile, David de Gea was given very little to do in the opening period.

Sofiane Boufal fired just wide from outside the area but during the first 45 minutes, De Gea’s concerns came mostly when United had the ball.

The home side pressed high and United were happy to play with fire. It meant they were often hemmed in their own territory, not helped by Paul Pogba’s inability to keep the ball.

But Saints rarely threatened. Aaron Wan Bissaka was particularly impressive – the 21-year-old kept Boufal quiet for long periods and almost doubled United’s lead with a volley that flew just over the bar.

Referee Mike Dean, ever the sideshow, was the target of boos at the half-time whistle, but he could do little to help Saints string some passes together in the final third. 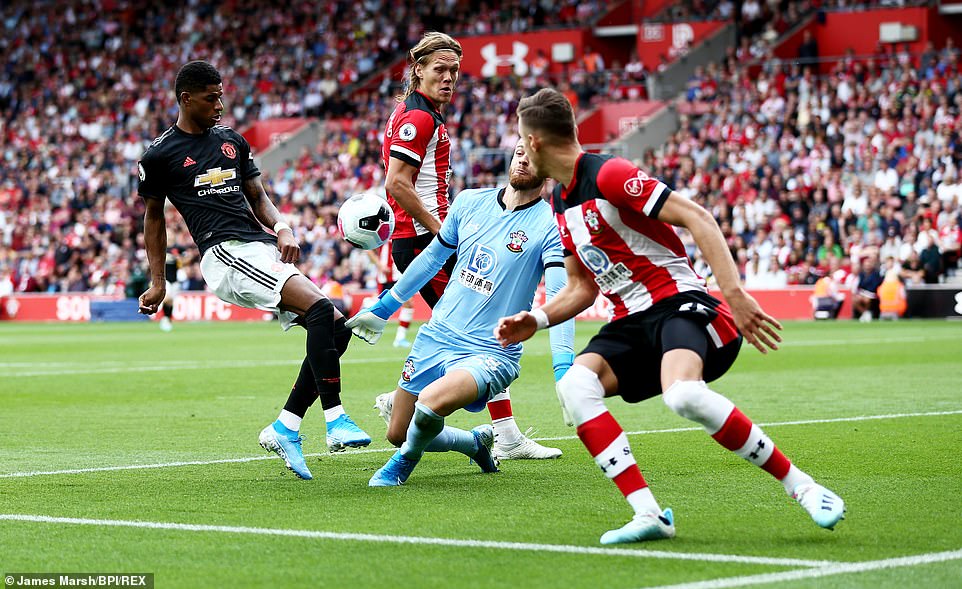 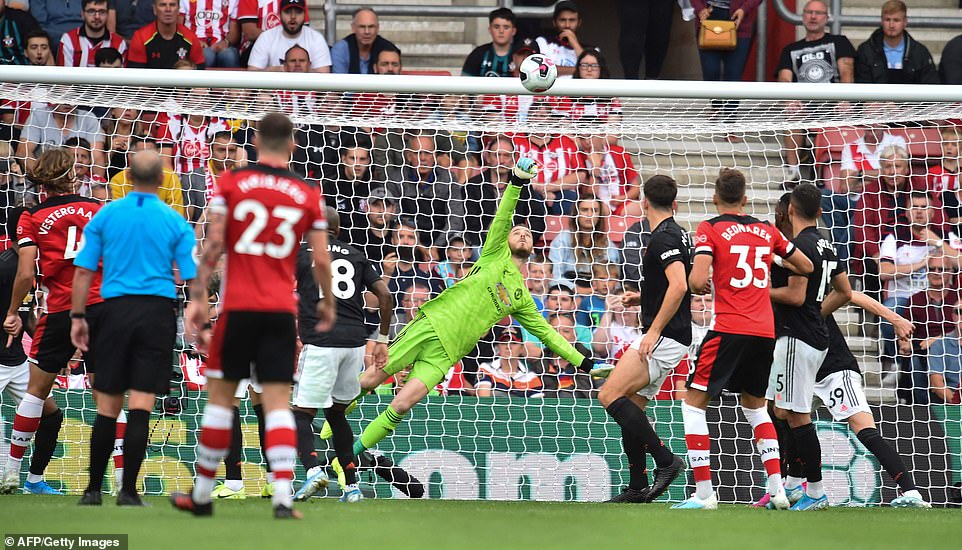 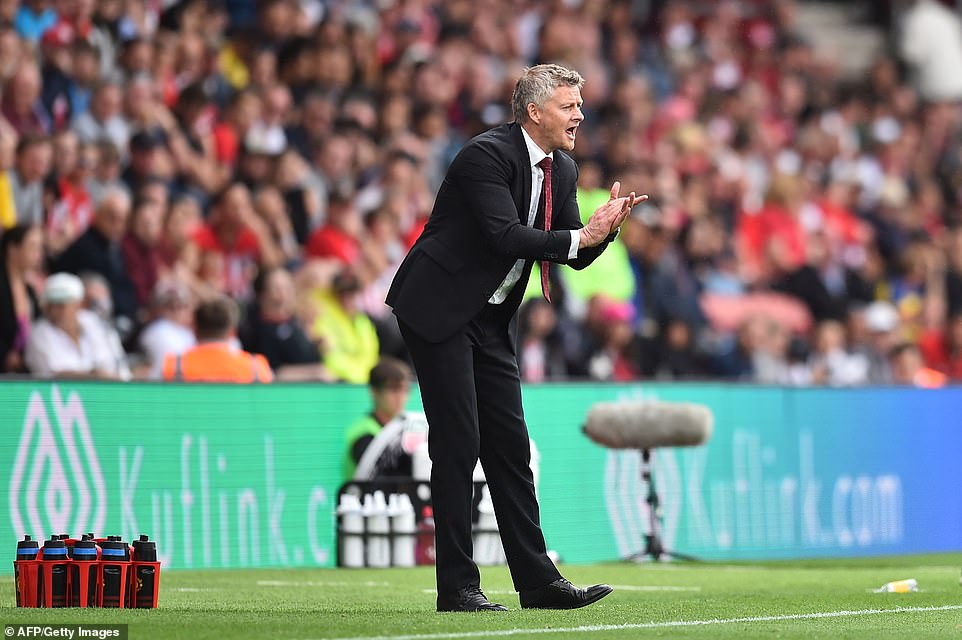 Ten minutes into the second period, though, their chance did come. After a neat reverse pass by James Ward-Prowse, the ball dropped to Che Adams.

But where James took his chance, Saints’ young new signing fluffed his lines. The striker fired wide from seven yards. It wasn’t a miss they rued for long.

From a corner three minutes later, Ings’ near post header was beaten away by De Gea. Danso collected the ball and crossed for Vestagaard to equalise.

That prompted Hasenhuttl to run on to the pitch, and Solskjaer to turn to two of his more experienced heads.

Lingard and Nemanja Matic were intorduced as Saints smelled blood. But their hopes of turning one point to three were extinguished when Danso – already on a yellow card – hacked down Scott McTominay.

Instead it was United who pushed for the winner. Rashford forced another sharp save from Gunn before Greenwood came on as a final roll of the dice.

The young striker went down in the box late on but neither Dean nor the VAR were convinced.

Come the final whistle there was more frustration for Solskjaer. After all, he can only play with the hands he has dealt himself.