Angel Di Maria is not in the ‘don’t celebrate against your old team’ club and twice he got to wheel away in delight as his brace buried Real Madrid in Paris.

He never much cared for the way he was forced out of Madrid in 2014 and sent to join Manchester United.

With great relish he punished sloppy Madrid as Zinedane Zidane – the man who has never coached a Champions League campaign and not won it – returned to the competition with a deserved defeat. 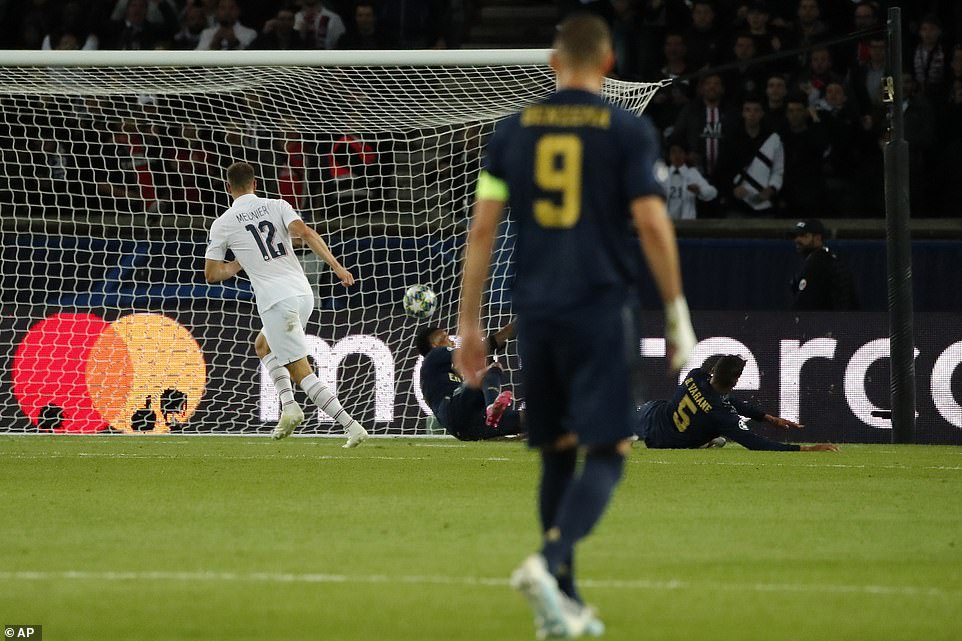 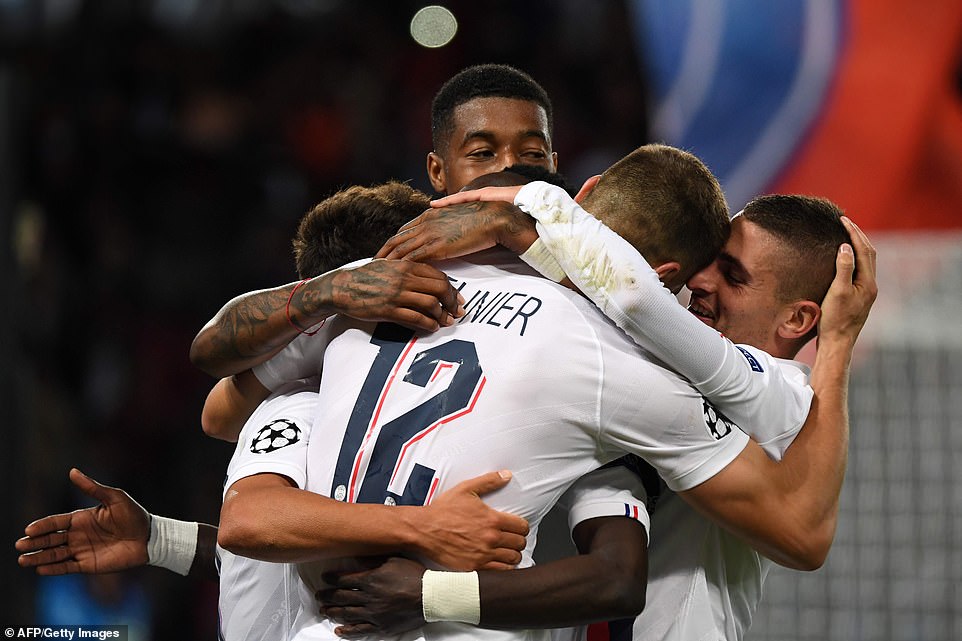 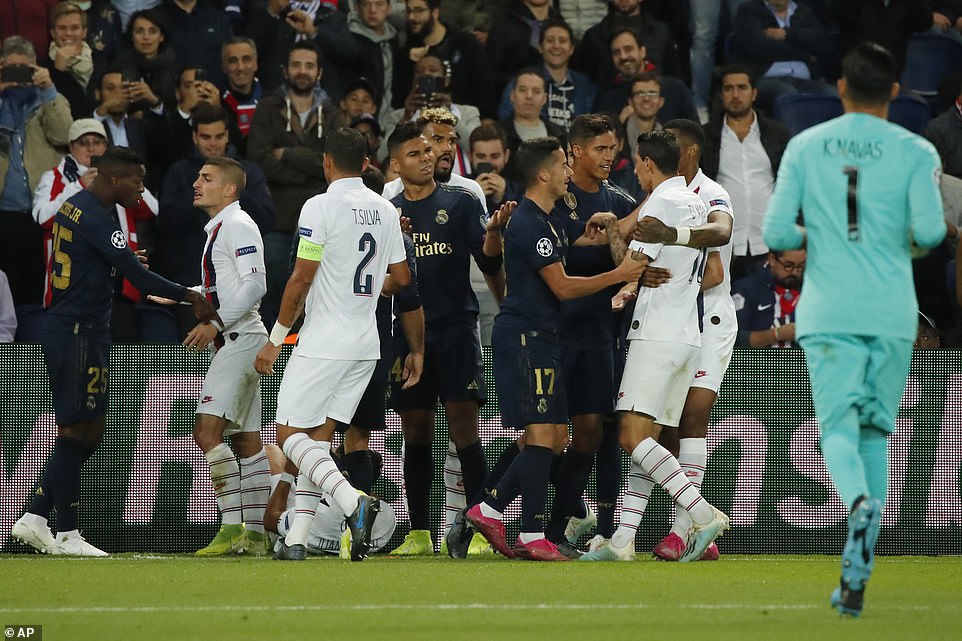 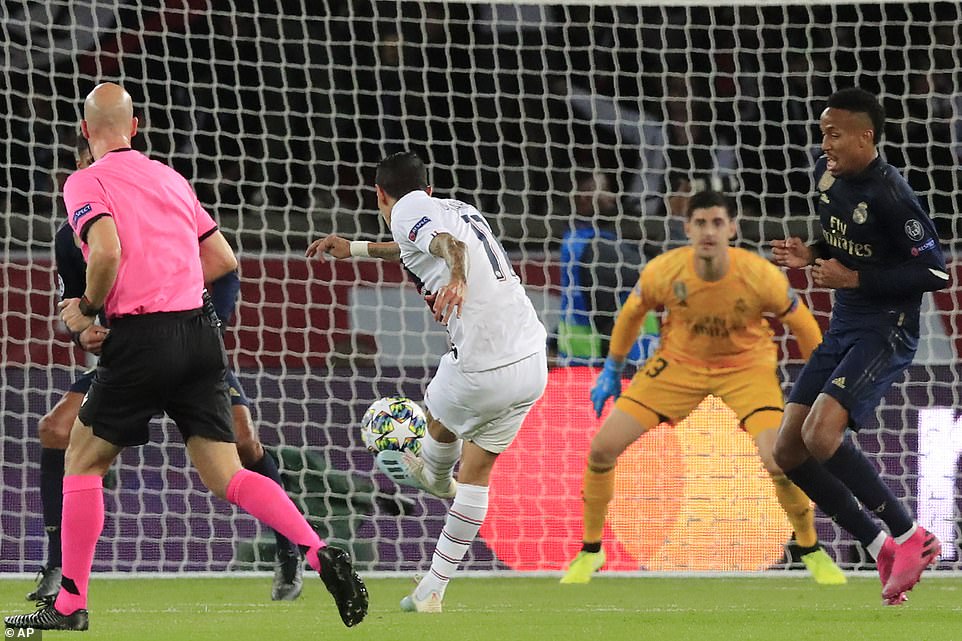 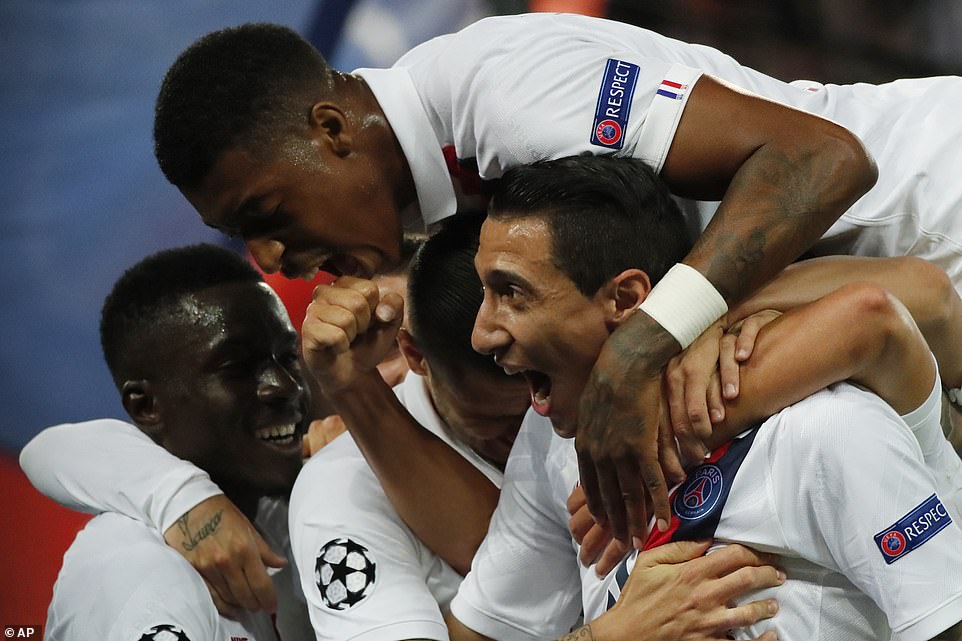 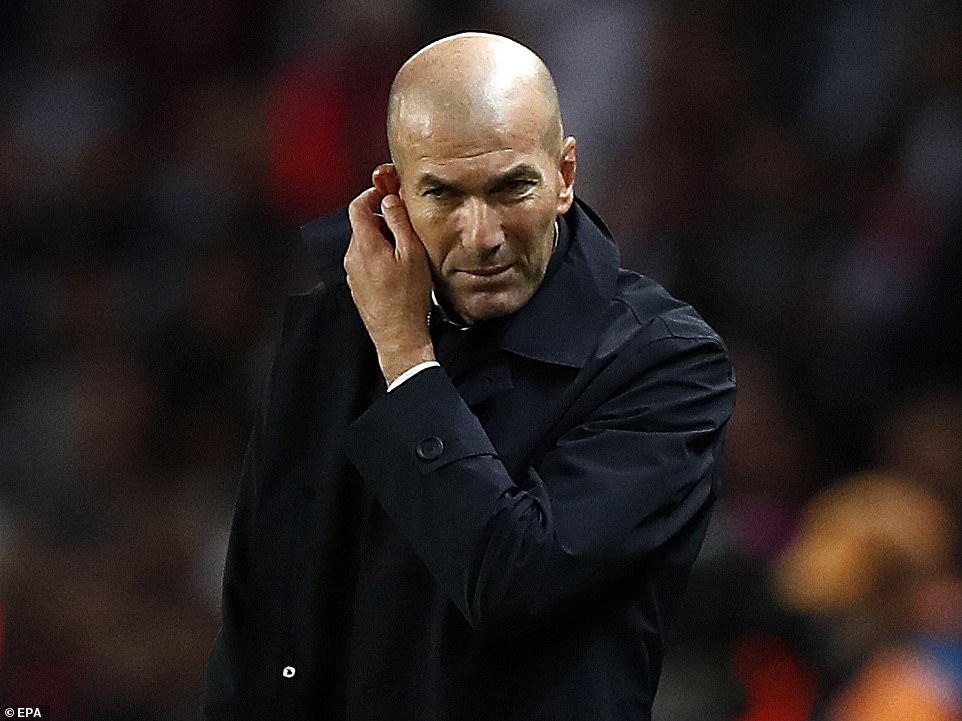 Everyone forgot about Di Maria in the build-up. This was to be Eden Hazard’s debut.

And it was also to be the night when Madrid would get their chance to beat PSG while they had Kylian Mbappe and Neymar out suspended and injured.

But with those two sat high in the stand like royalty the workers down below ran and ran until they had run Madrid into the ground.

No-one covered more ground than Idrissa Gueye who in front of a watching Claude Makelele gave a performance he would have been proud of – the former Aston Villa and Everton midfielder might even have shaded Di Maria for best player on the pitch.

PSG took the lead on 14 minutes when Juan Bernat crossed and Di Maria swept the ball past Thibaut Courtois.

Militao had been to slow to close down Di Maria and Courtois had left a gap at his near post which Di Maria found with deadly precision.

It was 2-0 on 33 minutes when PSG took a throw on the right touchline and after a few pinball passes Di Maria found himself with space on the edge of the Real Madrid area. 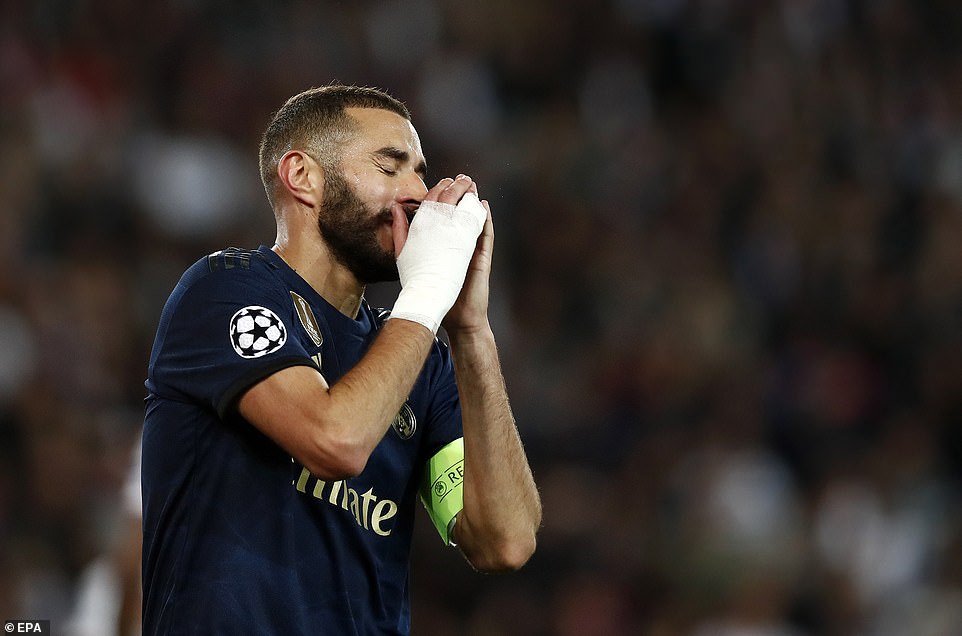 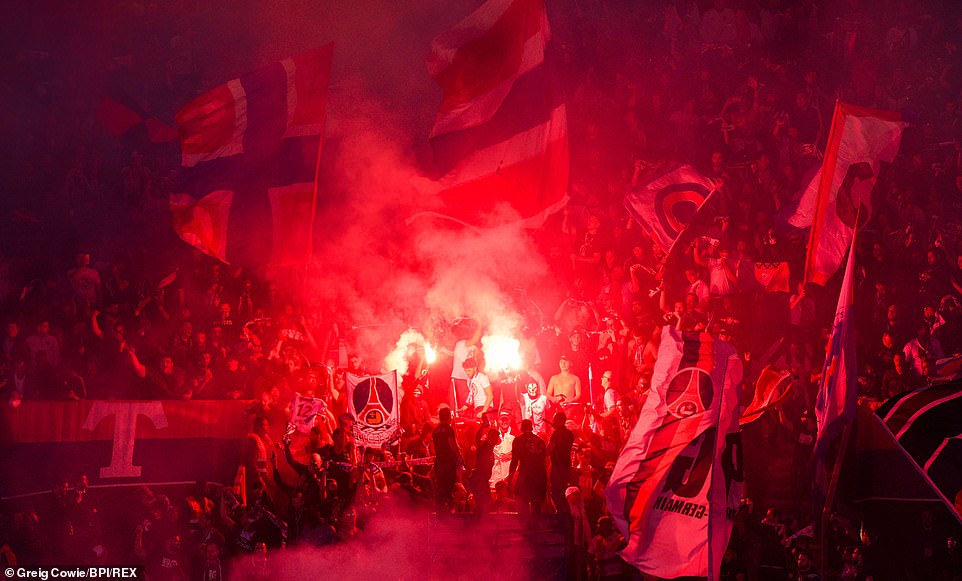 The stands exploded in excitement, with the PSG fans breaking out flares and turning the stadium into a mass of colour 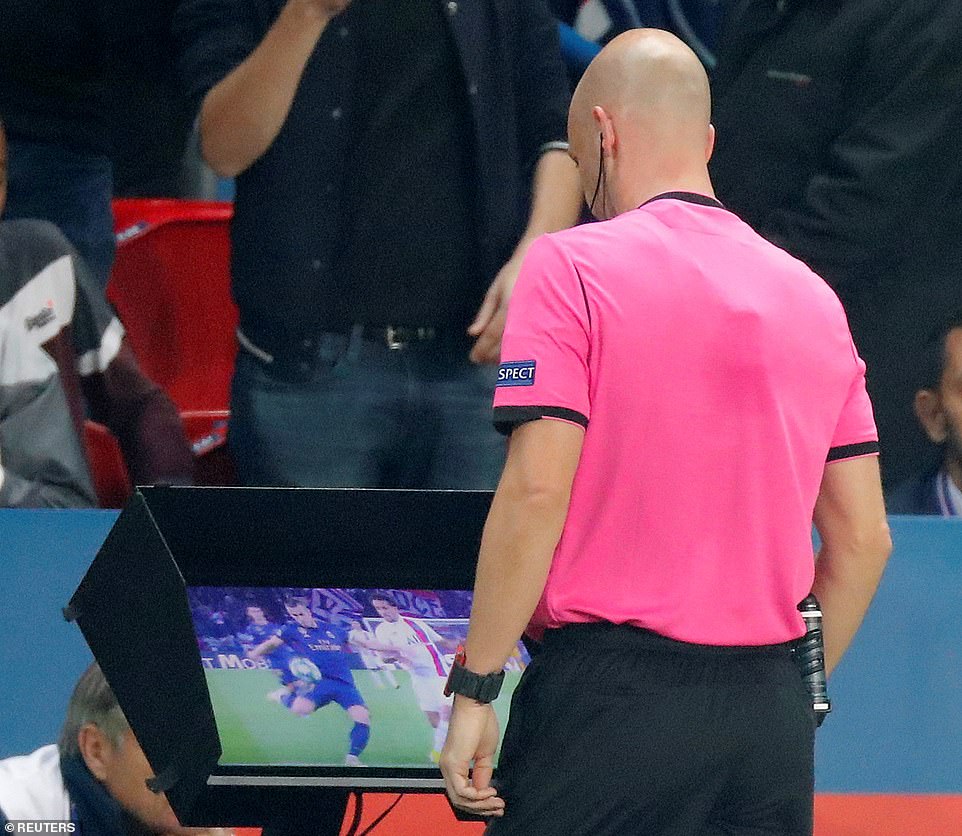 Referee Anthony Taylor refers to VAR before disallowing a goal scored by Real Madrid’s Gareth Bale, because of handball 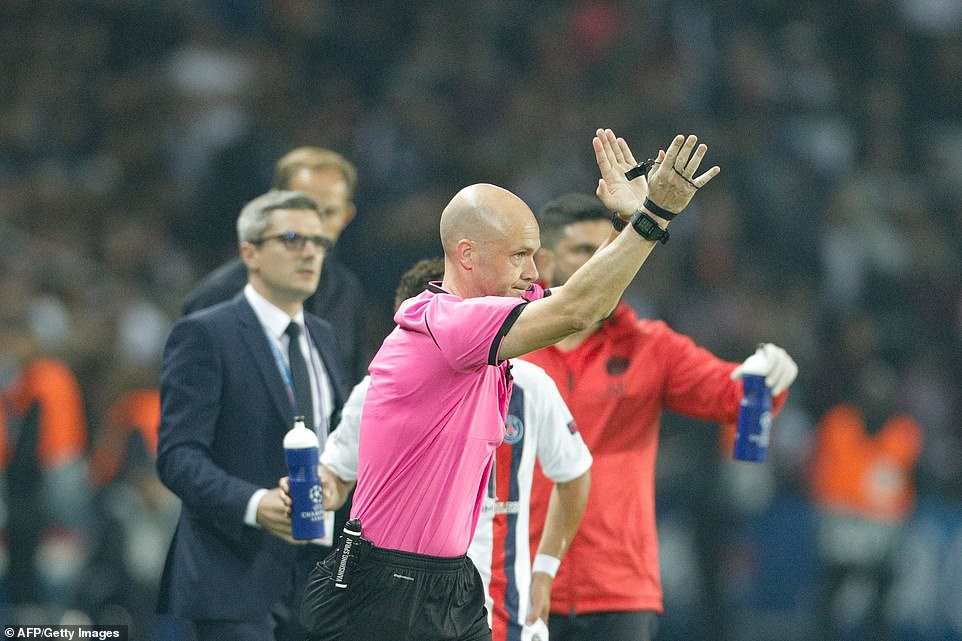 There were four Real Madrid players in his vicinity but each one was at a polite distance allowing him to swing that left foot and beat Courtois again.

Real Madrid were being over-run in midfield where what had been lost in the absence of Neymar, Mbappe and Edinson Cavani had been gained in endeavor and intensity.

Bale was the only threat to PSG’s goal and 10 minutes from half time he had the ball in the net with a glorious lob over Keylor Navas stunned to be beaten despite being only a couple of strides off his line.

Bale didn’t celebrate like a man who had just scored as goal just as good as his Champions League final goal in Kiev, more like a player sensing VAR was bound to have spotted the little nudge he gave the ball with the top of his hand as he juggled into position to shoot. And so it was. Anthony Taylor ran to the monitor pitchside and ruled out the strike.

Twice at the restart Courtois had to save Madrid from going further behind as PSG kept up the first-half pace with Di Maria sliding into tackles and Gueye covering every part of the pitch – that included him tracking back to leave Hazard in a heap by the byline as, having worked himself into a good position, he ran out of steam. 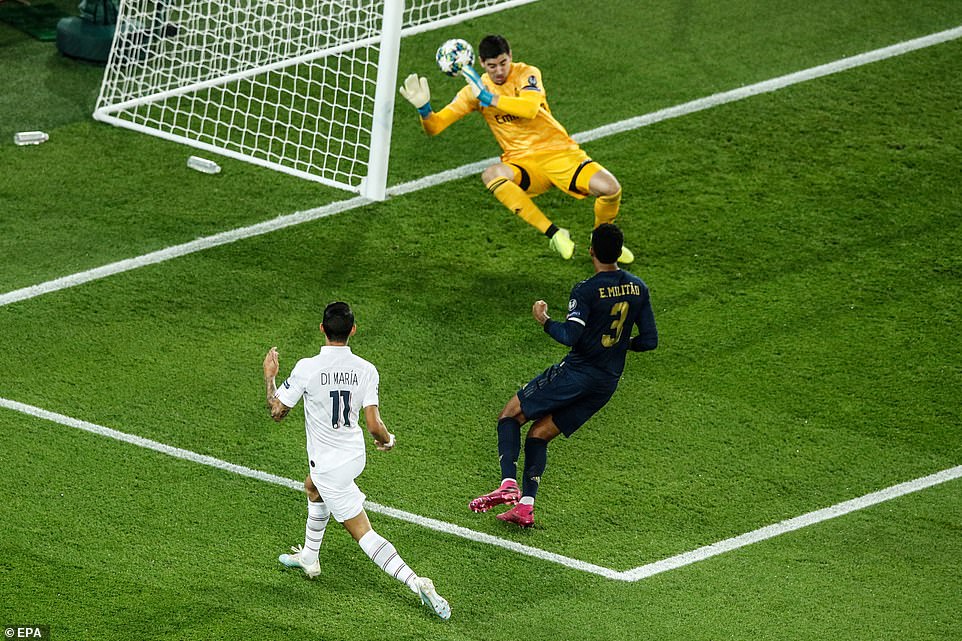 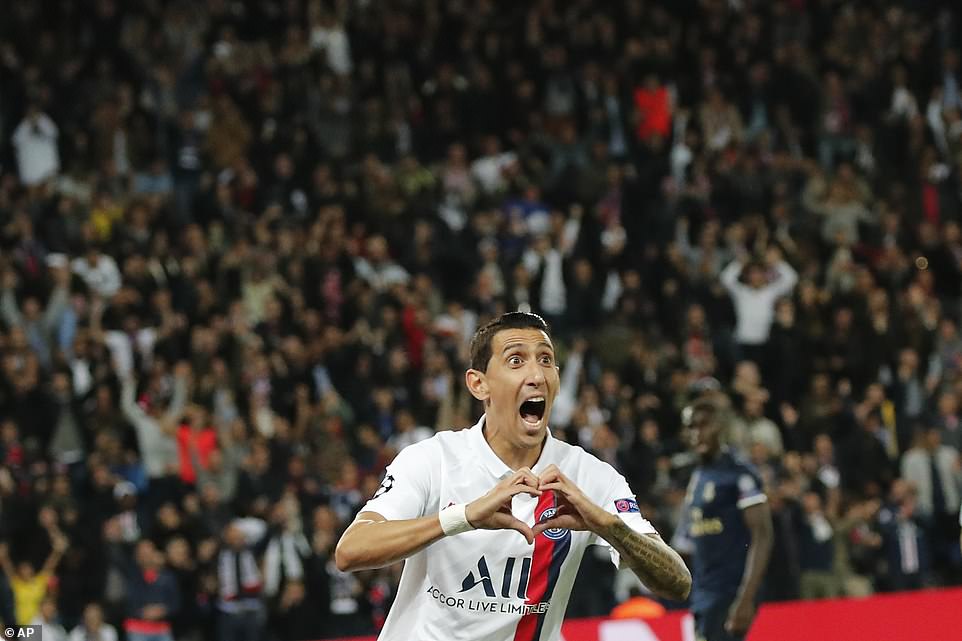 Joy was immediately plastered over the face of the forward, who peeled away performing his trademark loveheart celebration 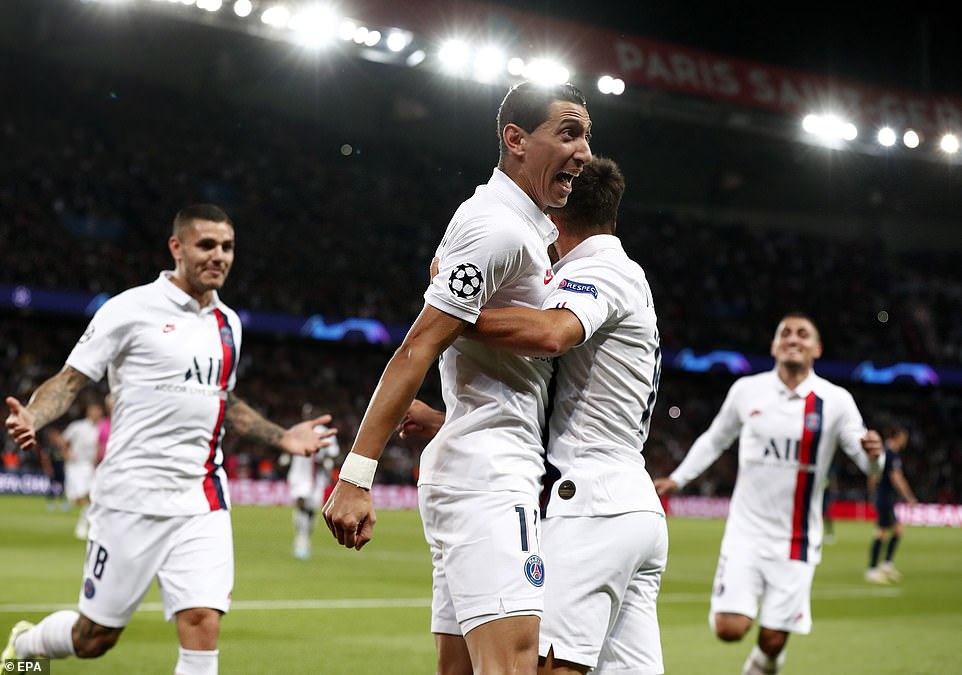 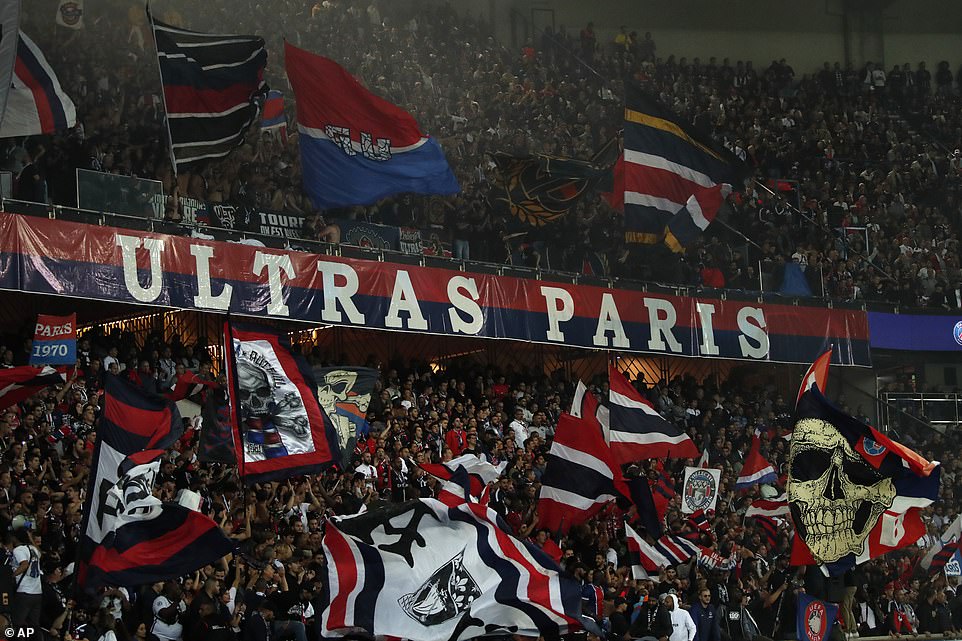 He was taken off on the 70-minute mark to be replaced by Lucas Vazquez. James went with him with Luka Jovic coming on to partner Benzema in an attack that continued to be starved of service.

From one half chance he slammed the ball past Navas and into the back of the net but Lucas had strayed off side and the flag was raised.

Madrid were missing the suspended Sergio Ramos whose personality always allows them to defend higher and play they ball out from the back. They also had a hole in the middle of the pitch – a Paul Pogba shaped hole, Zidane would argue.

PSG got the third when full-backs Thomas Meunier and Bernat combined with the former finishing to complete a miserable night for Real Madrid. They were blown away by a PSG side who had their most valuable assets grinning down from the seats in the stand.