in Local Sport
Reading Time: 12 mins read
A A
0

Pep Guardiola’s men, shorn of Aymeric Laporte, John Stones and Leroy Sane with significant injuries and Bernardo Silva awaiting to see if he has to face an FA charge over a social media post, had to show their gutsy side after Everton’s Dominic Calvert-Lewin had cancelled out Gabriel Jesus’s opener before half-time.

In a match as colourful as City’s fizzy yellow and Georgia peach kit, Mahrez then curled a wonderful free-kick around the Everton wall after 71 minutes with Raheem Sterling adding a late third. 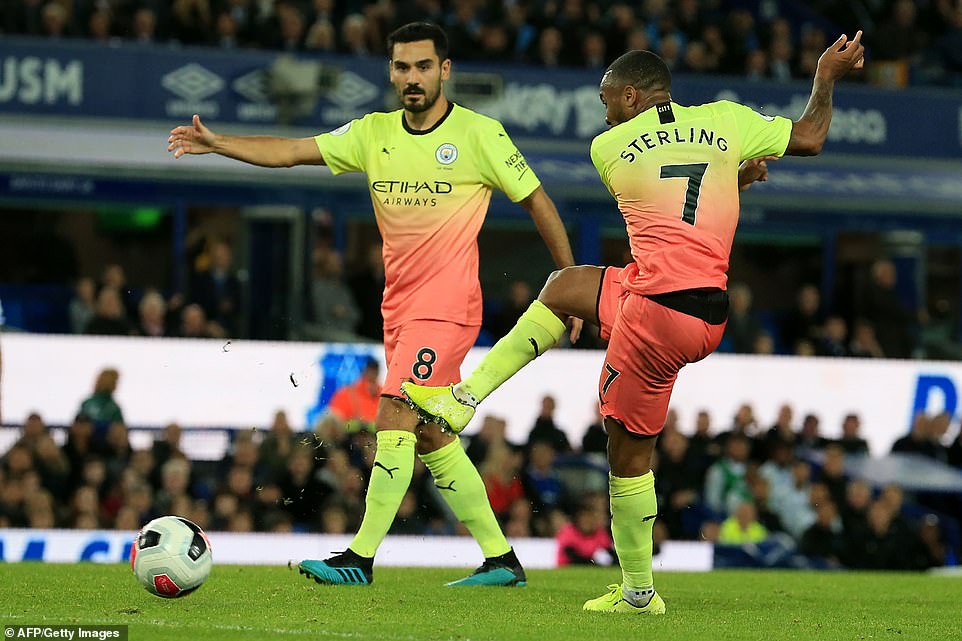 Everton were a distinct improvement on the side booed off against Sheffield United last weekend but there was concern over Theo Walcott who was carried off in a daze after being struck on the head by a Sterling cross and taken to hospital for a precautionary assessment.

On an evening when Everton fans unfurled an anti-racism banner in support of striker Moise Kean who suffered abuse whilst playing for former club Juventus, Guardiola put both Bernardo and Benjamin Mendy on the City bench after Bernardo’s post comparing a black caricature with his team-mate was being looked at by the authorities.

Surprisingly, record goalscorer Sergio Aguero was also among the City substitutes with Jesus given the centre-forward berth.

But the action was delayed after four minutes when Theo Walcott took a cross by Sterling on the side of the head and collapsed in a heap. 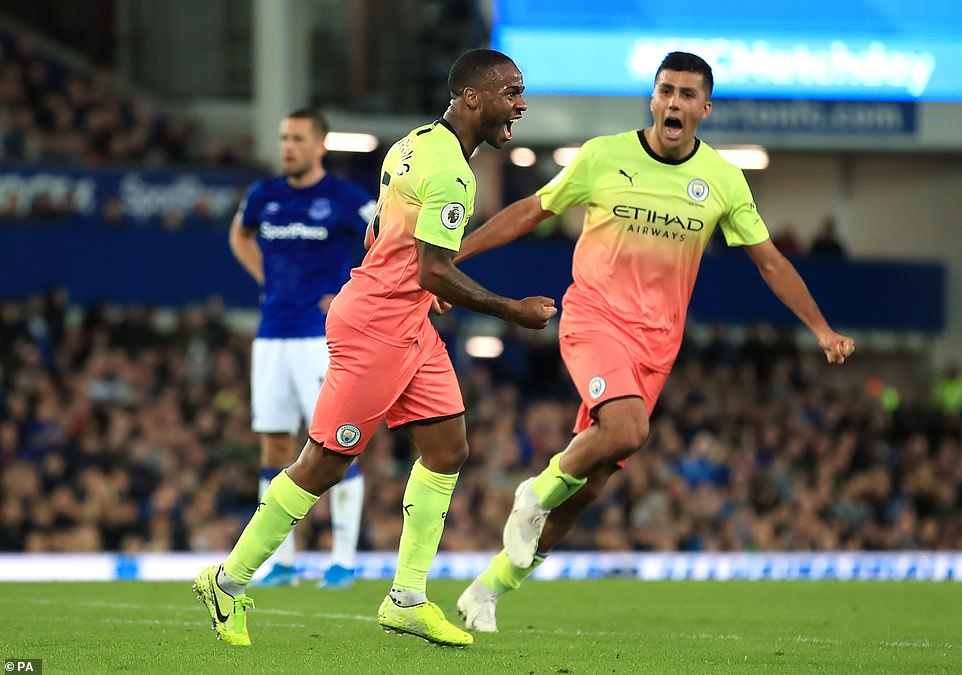 There were concerning scenes as medics rushed on to the pitch as the poleaxed Everton winger was inspected at length.

Walcott was carried off on a stretcher and then sent to hospital for further tests with Alex Iwobi sent on his place.

Once City got into their rhythm, Ilkay Gundogan managed to conjure up the miss of the season after 12 minutes.

Mahrez’s low centre from the right bypassed Jordan Pickford leaving the German midfielder unmarked in front of goal when he somehow managed to crack the ball against the crossbar from four yards.

Building up a head of steam, Raheem Sterling then dribbled into the Everton penalty area unflustered and his finish was heading into the bottom corner until Yerry Mina hacked clear. 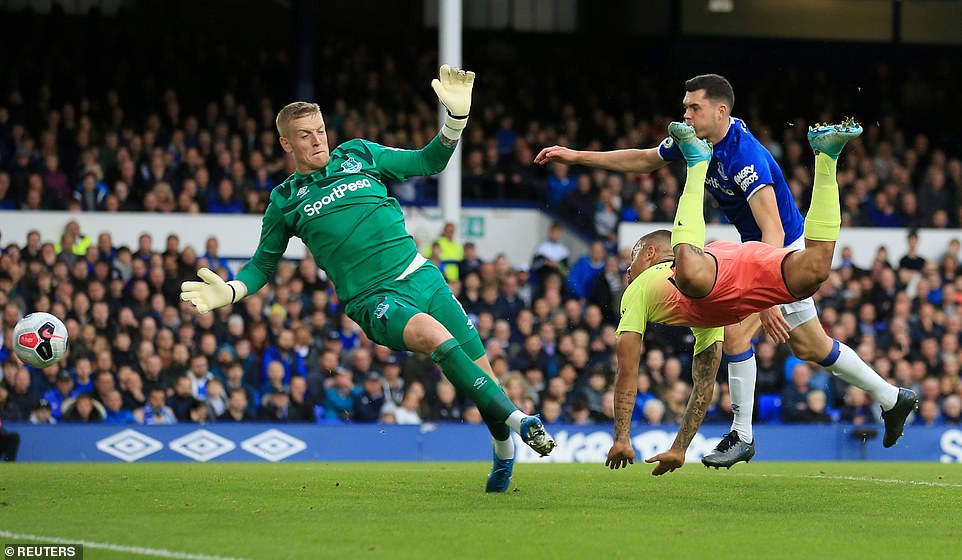 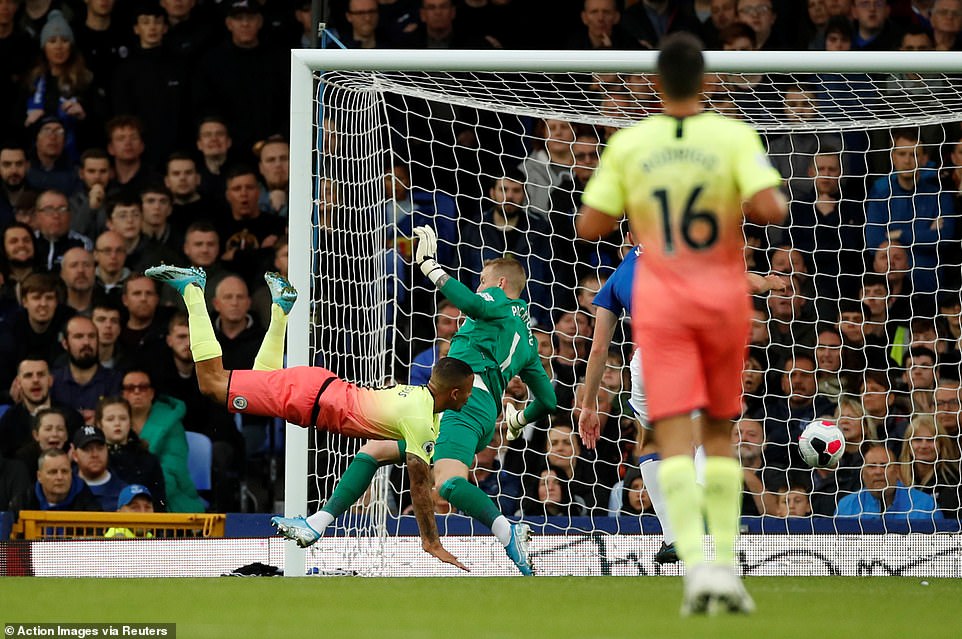 Though Guardiola’s men were wearing a garish third kit advertised as fizzy yellow and Georgia peach, rather than their traditional sky blue, they still knocked the ball around like champions.

At least Everton, booed off last weekend following a home defeat against Sheffield United, stuck at it and reached the first quarter with the game still goalless.

Their best moments came from a Lucas Digne free-kick that curled over and a blocked shot from Gylfi Sigurdsson after a rare foray into the City penalty area.

The away side’s domination drew rewards after 24 minutes with the perfect Guardiola goal. Mahrez got on his skates down the right flank and when he pulled the ball back to Kevin de Bruyne, his first-time cross arced onto the head of Jesus who beat Pickford from close range.

It was the 22-year-old Brazilian’s third goal in a row and underlined his reputation as an away-day specialist – his last seven goals have all been outside The Etihad including two in last season’s FA Cup Final. 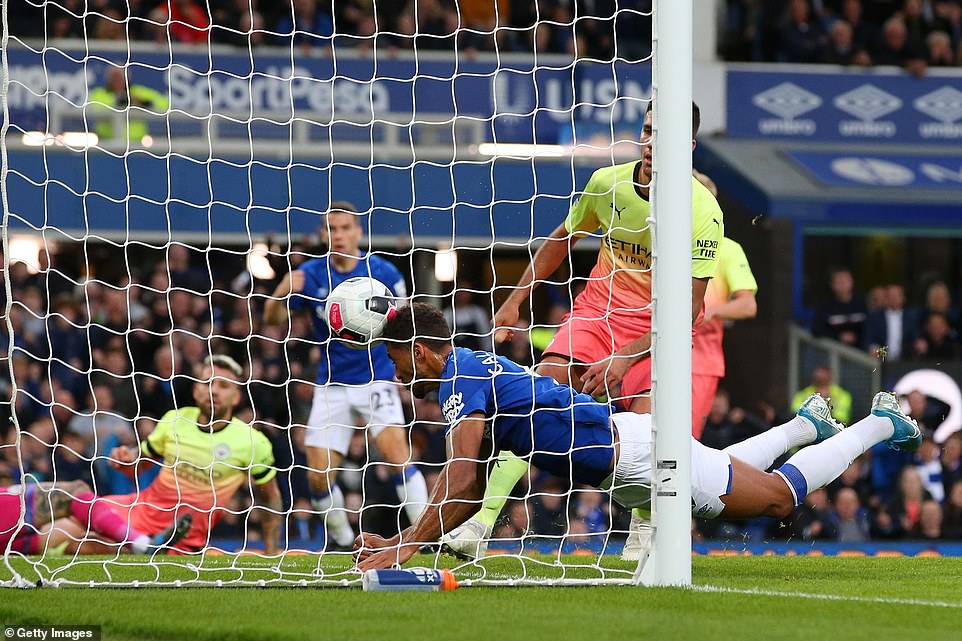 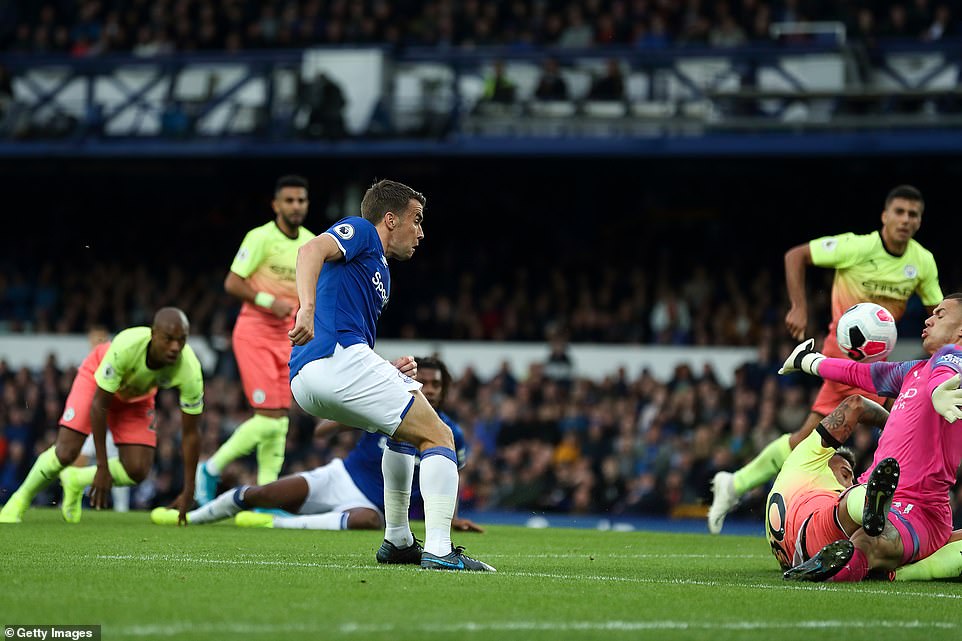 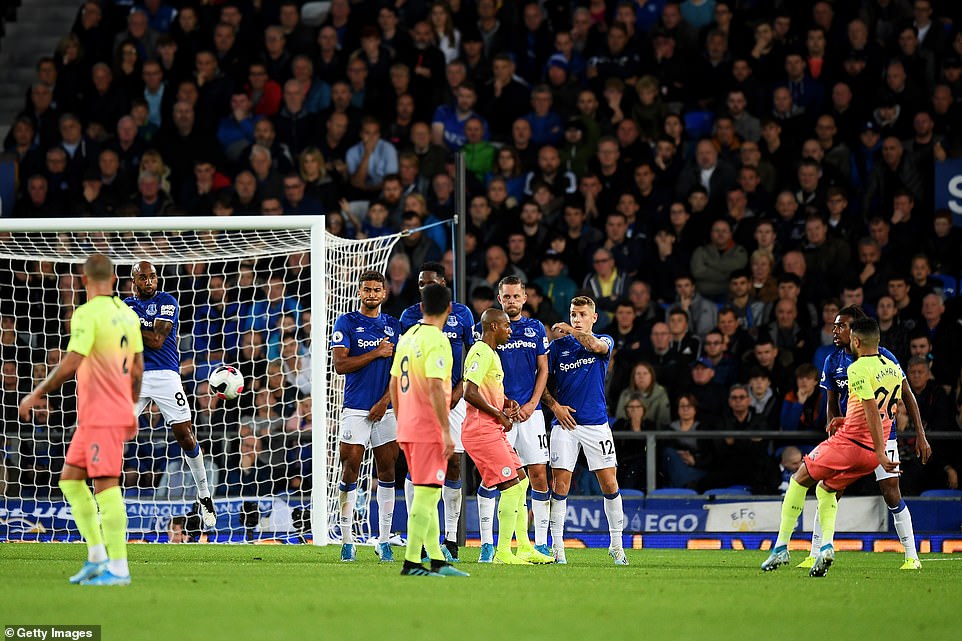 The big surprise was that the opening goal inspired Everton and stifled City rather than the other way round.

Under-pressure Marco Silva would have been thrilled by his side’s reaction. Ederson was forced to make good saves from Sigurdsson and Richarlison and after 33 minutes, the home side forced an equaliser.

With the home side committing bodies forward to test City’s makeshift central defensive partnership of Nicolas Otamendi and Fernandinho, Guardiola’s side crumbled.

Fernandinho, so good when he plays in the centre of midfield, was culpable twice. His pass to Rodri inside his own penalty area was risky and intercepted by Iwobi. And when the Nigerian powered back towards goal, Fernandinho’s half-hearted tackle was unable to stop the ball reaching Seamus Coleman. 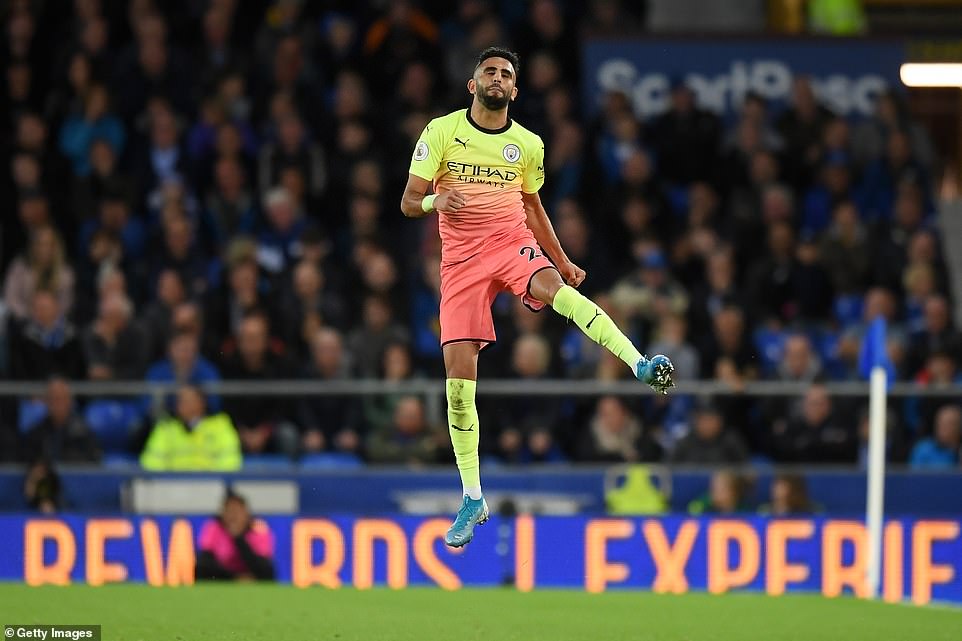 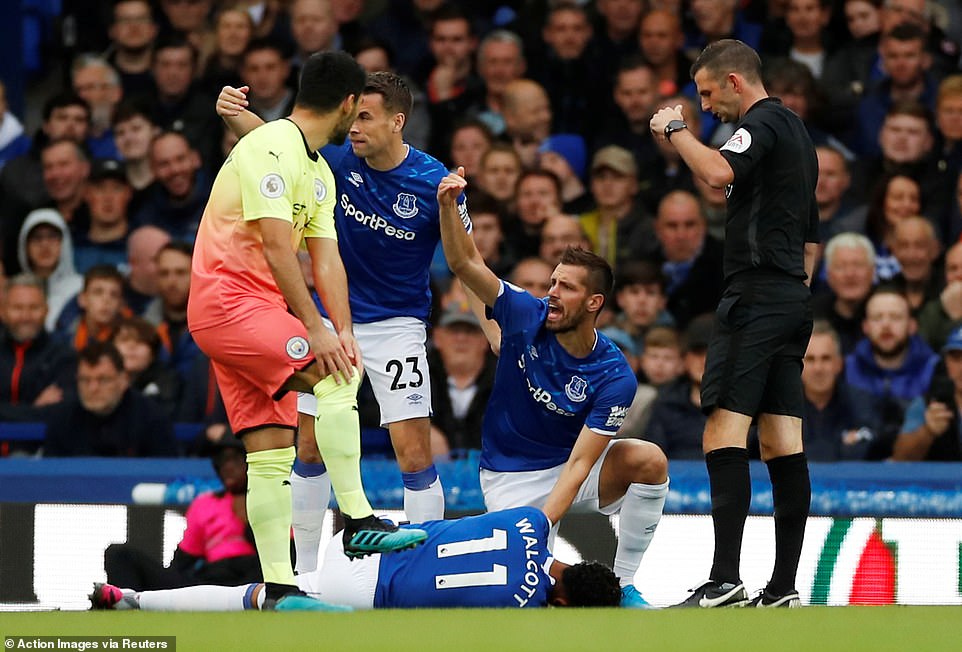 The right-back chipped the oncoming Ederson like a proven marksman and the ball was heading I anyway before Dominic Calvert-Lewin applied a finishing header on the line to claim his fourth goal in four games.

City came out for the second half as if they’d had a talking-to from Guardiola. They moved the ball quicker, put Everton under pressure and one crossfield pass from De Bruyne to Sterling to set up a chance for Mahrez was exquisite.

But this was the Everton their fans wanted to see and with the floodlights turned on responded with a brilliant downward header from Mina that Ederson showed amazing reflexes to tip over.

A pulsating encounter even included a little bit of needle with Morgan Schneiderlin, formerly of Manchester United, squaring up to City’s De Bruyne. 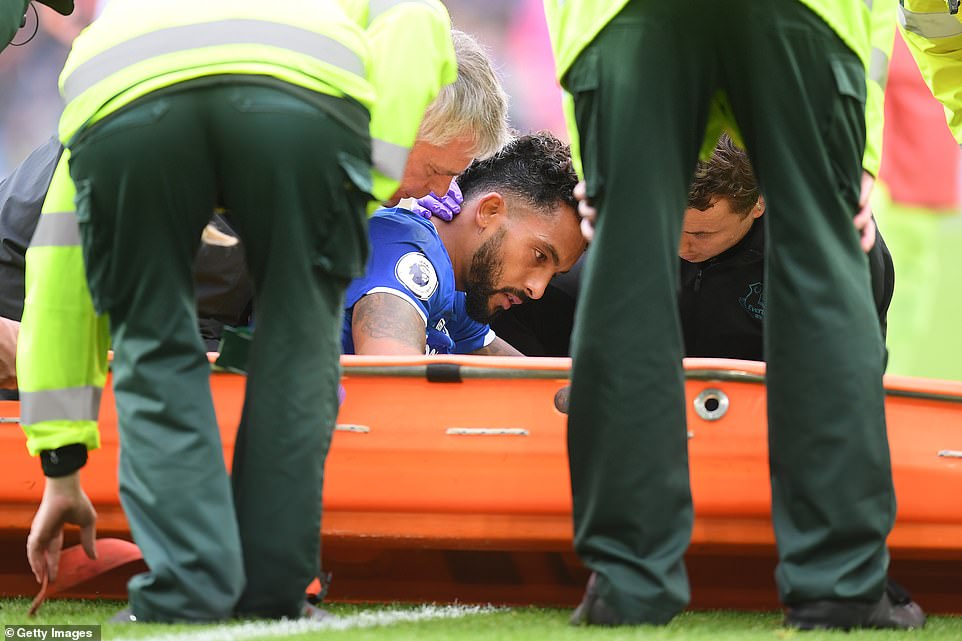 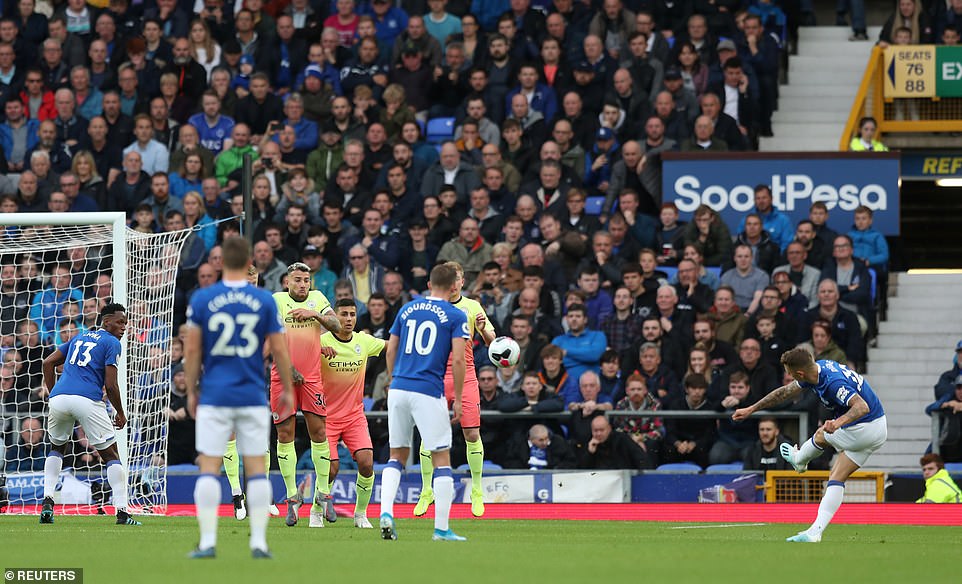 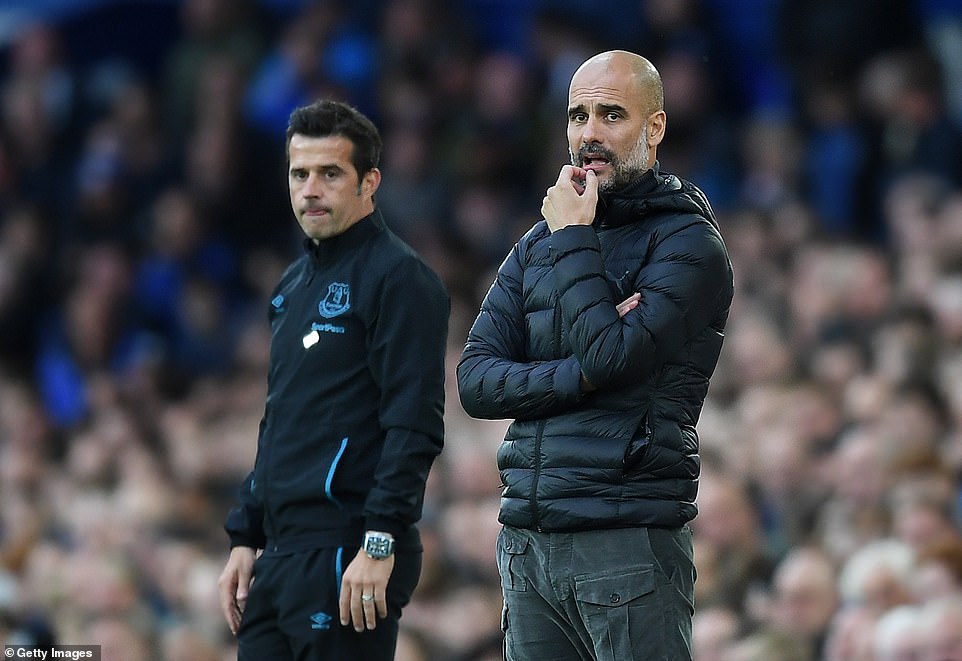 Fernandinho caught Richarlison with a high kick and was probably relieved it wasn’t spotted by referee Michael Oliver or checked by VAR.

The change did inspire City to regain the lead six minutes later but it was man-of-the-match Mahrez rather than the Argentine superstar who made the difference. 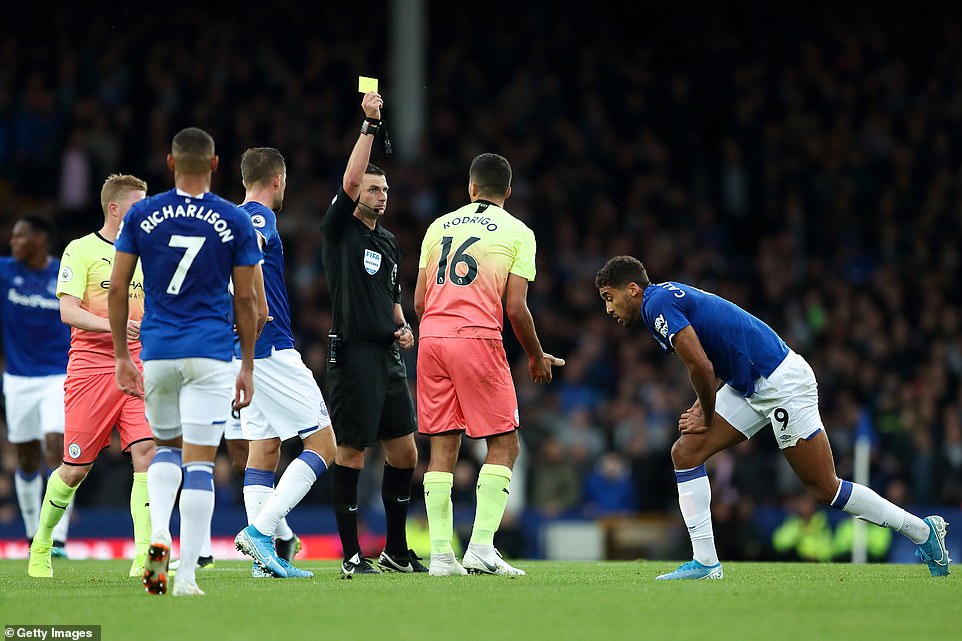 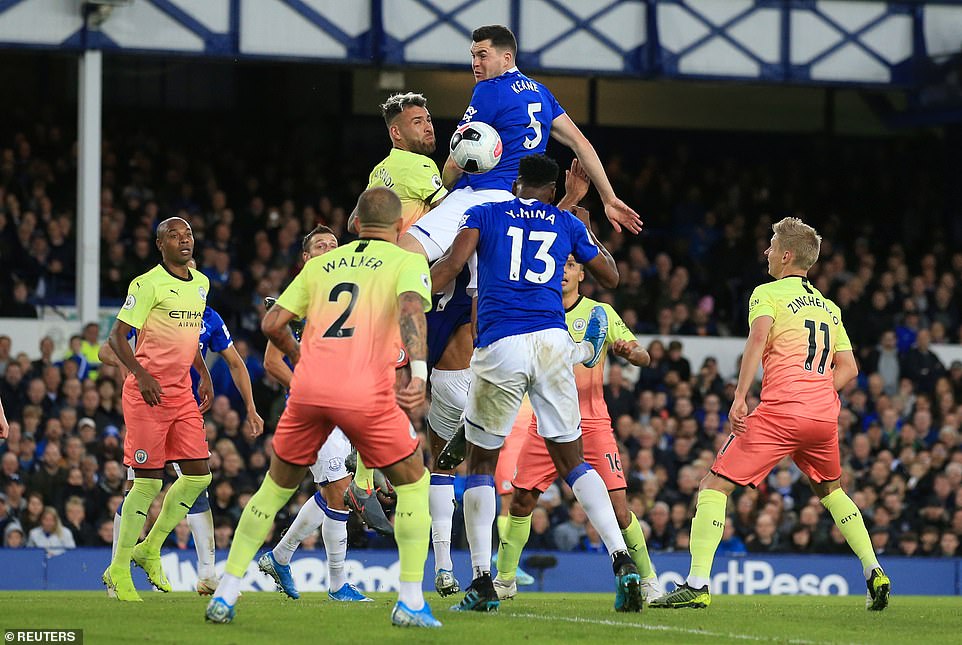 After Mina had fouled De Bruyne a few yards outside the Everton penalty area, Mahrez took responsibility with a brilliant low strike that curled around the wall and nestled in Pickford’s bottom right-hand corner.

Again, Everton nearly caught City cold again after falling behind. Sigurdsson threaded a lovely pass into Calvert-Lewin but the forward was foiled by Ederson’s legs when through on goal.

City wrapped up the points after 85 minutes when Aguero’s cross deflected off Pickford’s boot into the path of Sterling who crashed in his finish via the underside of the crossbar.

The next 12 to 24 hours are critical for Damar Hamlin’s recovery, doctor says

Japan is offering $7,500 per child for families who moves out of Tokyo

2023 will be difficult year for most countries- IMF

GH¢575.7bn debt could be much higher than announced – Jackson