Boris Johnson is to hand voters a windfall by ending the benefits freeze as part of a multi-billion pound package of Election spending promises which has caused mounting alarm in the Treasury.

And a new Mail on Sunday poll has placed the Prime Minister 12 points clear of Jeremy Corbyn, with the Tories on 40 per cent and Labour on 28.

Under plans being announced today, around ten million people will benefit from a rise of 1.7 per cent in welfare payments – the first hike since April 2015 – as Mr Johnson moves to blunt Jeremy Corbyn’s main line of attack in the Election against the so-called ‘callous’ Tories making cuts.

And a new Mail on Sunday poll has placed the Prime Minister 12 points clear of Jeremy Corbyn, with the Tories on 40 per cent and Labour on 28.

Pensioners will also see their income rise by nearly four per cent in the biggest boost they have received for eight years.

The ballooning welfare bill comes as Chancellor Sajid Javid has privately expressed concern that the Tory manifesto is set to contain the most expensive set of policies in history, drastically reducing his room for manoeuvre to deliver tax cuts for traditional Tory voters.

The slow start to the Tory Election campaign has caused disquiet in the Cabinet, The Mail on Sunday can reveal.

Labour leader Jeremy Corbyn held rallies yesterday in Swindon and Bristol, but Boris Johnson was not seen in public – beyond a photograph of him watching England’s Rugby World Cup final defeat.

While Mr Corbyn has already given one major speech, Mr Johnson has stuck to pre-recorded broadcast interviews.

One Minister lamented: ‘We’ve handed them the weekend – where is Boris?

Why isn’t he out there – he needs to be unleashed.’ Mr Johnson is expected to kickstart his campaign after Parliament is dissolved on Wednesday with a tour of the Midlands.

The move is understood to be driven by Mr Johnson’s most influential adviser, Dominic Cummings. He believes the Tories’ only path to a majority lies in persuading Brexit-supporting Labour voters in Northern and working-class communities to switch sides – by ditching the last remnants of the austerity drive launched by David Cameron’s government.

The £5 billion-a-year cost of the benefits and pensions rise comes on top of the extra £34 billion a year which has been promised to the NHS by 2024; £13.4 billion for 20,000 extra police officers and reversing cuts to school budgets; and billions more to extend free childcare for three and four-year-olds and to continue the freeze on fuel duty.

Mr Johnson has also promised to raise the threshold at which people start paying national insurance and raise the level at which the 40p rate of income tax kicks in from £50,000 to £80,000. Cuts to stamp duty are also being considered.

However, Mr Javid has argued in meetings with MPs that he does not want the hard work of the last ten years to be ‘thrown away on his watch’. He told colleagues that it was essential for the Tories to produce a responsible manifesto which ‘firmly outlined and won the argument for fiscally credibility’.

The state pension rise of 3.9 per cent, which will benefit the population demographic most likely to vote, will take effect in April as the result of the Government’s triple lock system, under which pensioners receive a minimum of a 2.5 per cent rise and a maximum of whatever is higher out of the average rise in earnings or prices.

The inflation-linked rise in benefits will affect everyone who is in receipt of Universal Credit, Jobseekers’ Allowance, Income Support, Child Benefit and tax credits. 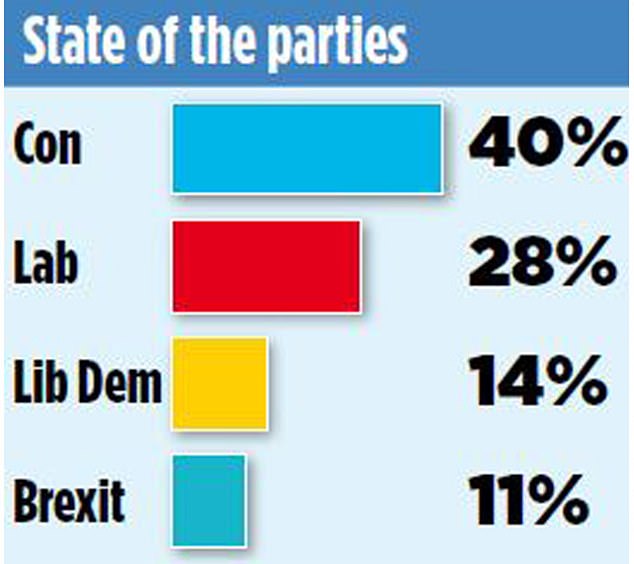 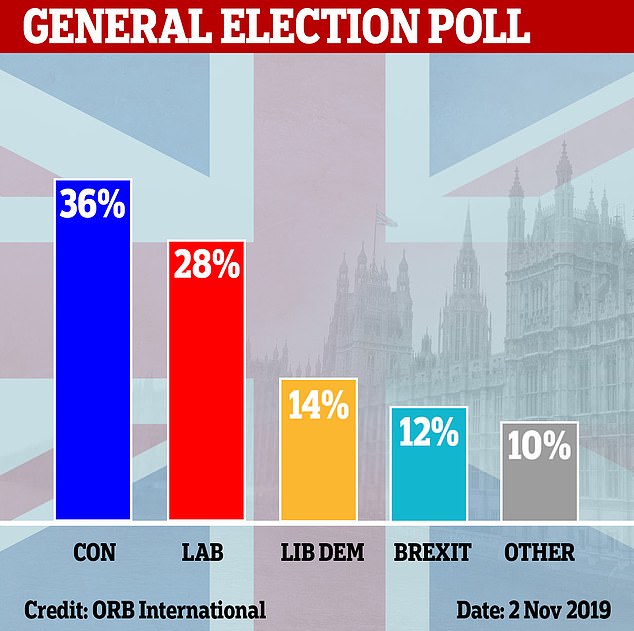 Yesterday, the Treasury also approved an additional £70 million in funding for counter-terrorism for the next financial year in a move that is expected to be announced by Home Secretary Priti Patel next week as part of a major law and order policy blitz. Tory strategists are acutely aware that voters in the lower income social brackets are twice as likely to support Nigel Farage’s Brexit Party, and are keen for them not to fall into Labour’s hands.

Mr Cummings used his last meeting with Government advisers before they hit the campaign trail last week to warn them that ‘people out there are hurting’ and ‘they haven’t had a pay rise in ten years’.

He said: ‘Don’t look at it through the eyes of London commentators and people like us and our friends who are reasonably comfortable. People out there are still suffering from the financial crash.’

However, other advisers on the campaign fear that by promising to ‘turn on the spending taps’, the party is prevented from being able to highlight the fiscal profligacy of a Corbyn government, setting up a debt burden for future generations. Last night, one Cabinet Minister told The Mail on Sunday: ‘We must trumpet our handling of the economy over the last ten years without rubbing people’s faces in it.

‘At the same time, if we are spending all this money, get Boris out there saying it and taking credit for it. The worst thing would be seeming to be ashamed of our own giveaways.’

This newspaper has learned Ministers were buoyed by a polling briefing presented by Conservative HQ and led by Australian strategist Isaac Levido last month.

Mr Levido, who was at Sir Lynton Crosby’s side for David Cameron’s successful 2015 campaign, has worked on Republican Senate campaigns in America and earlier this year headed up the Australian Liberal Party’s election effort.

Despite the party having been behind in the polls in Australia for three years, his aggressive campaign –playing on voters’ fears of Labor’s economic competence – was successful.

Mr Johnson has also promised to raise the threshold at which people start paying national insurance and raise the level at which the 40p rate of income tax kicks in from £50,000 to £80,000

His presentation showed that the British Labour Party has lost as much as 40 per cent of its 2017 support in some parts of the Brexit- supporting North and North East.

While the Tories’ sky-high 2017 vote share failed to materialise into a majority, the strategists said currently there was only limited signs of loss of support to the Brexit Party and Liberal Democrats in some key marginals.

One Minister present said: ‘In some places if we can stand still or cauterise 2017 losses, the catastrophic Labour drop will get us over the line.

‘The scale of their collapse is phenomenal.’

I don’t like Shatta Wale’s music, nobody can force me – Blakk Rasta