Jared Kushner gave Saudi Prince PERMISSION to arrest Jamal Khashoggi before he was killed – but Turkey intercepted the call and used it to force Trump to pull out of Syria, report claims

Jared Kushner gave permission to Saudi ruler Mohammad bin Salman to arrest Jamal Khashoggi before he was killed and dismembered, a whistleblower claims.

However, Turkish intelligence intercepted the call and President Recep Erdogan then used the information to force President Trump to remove his troops from northern Syria, according to the Spectator.

The report claims that investigators on the Democratic-led House Intelligence Committee are aware of these allegations and are planning to dig further into them while pursuing the impeachment inquiry over Trump’s dealings with Ukraine.

It also claims that the number of intelligence whistleblowers who are willing to give evidence to the impeachment committee is seven.

The Khashoggi whistleblower takes that tally up to four, meaning there are three others waiting in the wings.

Khashoggi was a Washington Post columnist who at one point was considered close to the ruling Saudi royal family but later became disillusioned by its powerful young prince. 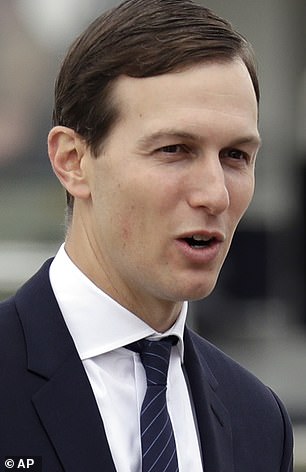 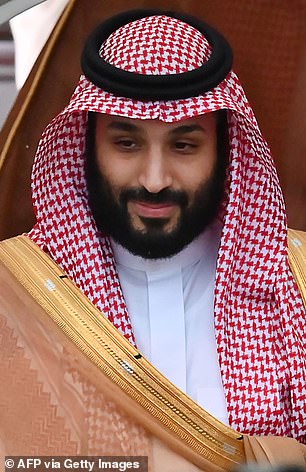 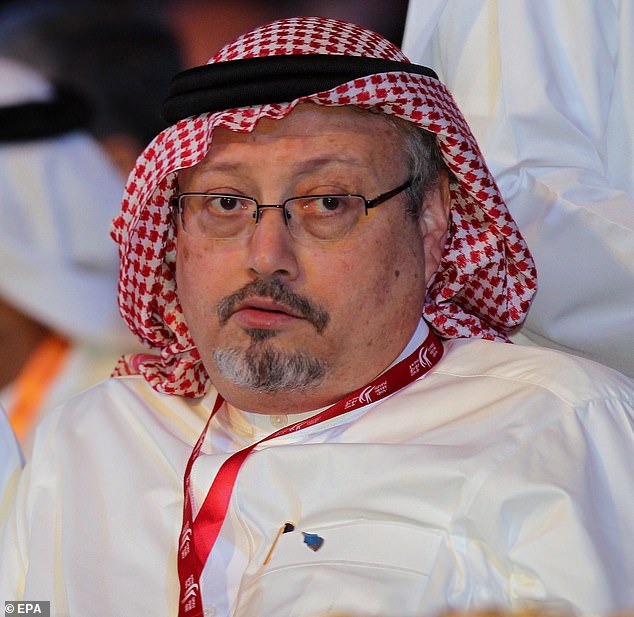 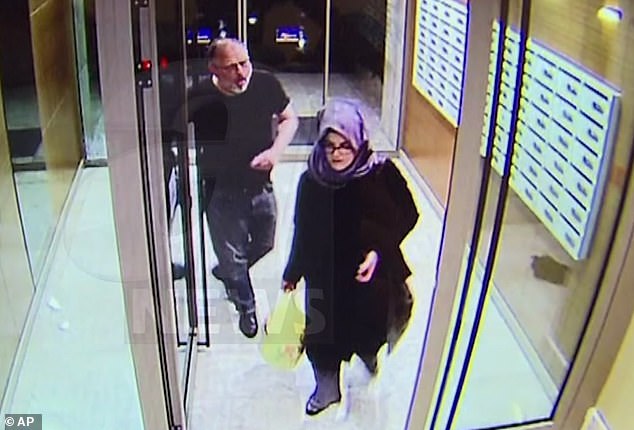 A CCTV image purportedly showing Saudi writer Jamal Khashoggi and his fiancee, Hatice Cengiz at an apartment building in Istanbul, Turkey, just hours before his death in the Saudi Arabian consulate

In October 2018, Khashoggi visited the Saudi consulate in Istanbul to sort documents before he was to be married to his Turkish fiancee, Hatice Cengiz. He never emerged.

The Turkish government said it has evidence that Khashoggi was killed and his body was dismembered.

In recent interviews with American media outlets, bin Salman said he bears responsibility for the Khashoggi killing ‘because it happened under my watch.’

But he denies ordering the murder.

After initial denials, the official Saudi narrative blamed the murder on rogue operatives. 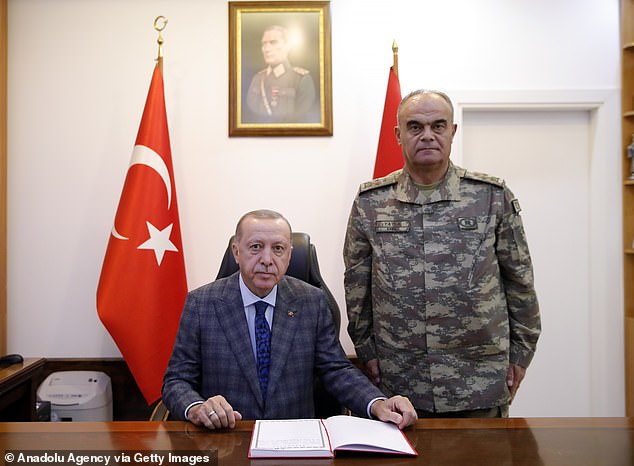 The public prosecutor said the then-deputy intelligence chief ordered the repatriation of Khashoggi, a royal insider who became an outspoken critic, but the lead negotiator ordered him killed after discussions for his return failed.

Eleven Saudi suspects have been put on trial in secretive proceedings but only a few hearings have been held.

A United Nations report has called for Prince Mohammed and other senior Saudi officials to be investigated.

The fallout from the killing has damaged the international reputation of the 33-year-old and there have been rumours of a growing rift between him and his father, King Salman bin Abdulaziz Al Saud.

Kushner, who is a top White House aide whose portfolio includes diplomatic relations with Saudi Arabia, has defended MBS.

His ties with the Saudi prince have come under scrutiny after it was learned that the two communicated through text messages on WhatsApp.

Democrats in Congress have sent letters demanding that the White House provide documents about senior aides’ use of private email and text services. 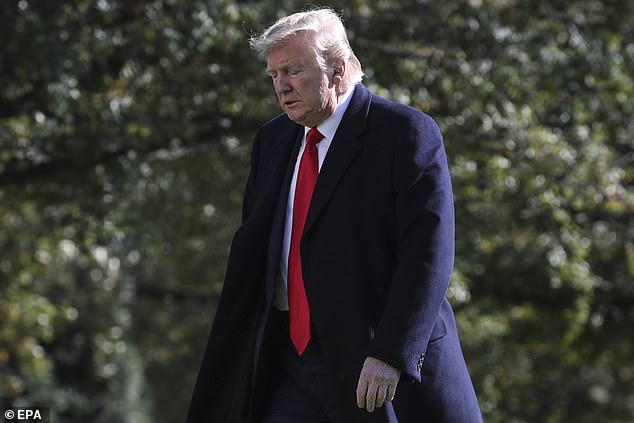 Trump’s decision to remove US troops from northern Syria, allowing Turkey to launch a military offensive against the Kurds, was heavily criticized

The Trump administration has refused to condemn the Saudi prince despite its spy agencies saying he is responsible for Khashoggi’s death.

Both Republicans and Democrats slammed Trump last month after he agreed to Erdogan’s request to remove American forces from the northern Syria region which shares a border with Turkey.

The Republican president is under increasing pressure as the House of Representatives forges ahead with its investigation of whether Trump solicited help from Ukraine as he seeks re-election next year.

Leaders of the Democratic-controlled House expect to begin public hearings in the next few weeks.

The inquiry was launched on Sept. 24 after a whistleblower complaint from the unidentified U.S. intelligence official who was concerned the president’s actions on Ukraine were illegal and jeopardized national security.

The murder of Jamal Khashoggi: Key moments surrounding the writer’s disappearance and death

Saudi journalist Jamal Khashoggi, who wrote critically of the kingdom’s policies and Saudi Crown Prince Mohammed bin Salman, was killed in the Saudi Consulate in Istanbul. Turkish officials say a 15-men team tortured, killed and dismembered the writer, while Saudi Arabia says he died in a ‘fistfight.’

Here are some key moments in the slaying of the Washington Post columnist:

September 2017: The Post publishes the first column by Khashoggi in its newspaper, in which the former royal court insider and longtime journalist writes about going into a self-imposed exile in the U.S. over the rise of Prince Mohammed. His following columns criticize the prince and the kingdom’s direction.

September 28, 2018: Over a year after the Post published his first column, Khashoggi visits the Saudi Consulate in Istanbul, seeking documents in order to get married. He’s later told to return October 2, his fiancee Hatice Cengiz says. Turkish President Recep Tayyip Erdogan says a plan or a ‘road map’ to kill Khashoggi was devised in Saudi Arabia during this time.

September 29: Khashoggi travels to London and speaks at a conference.

October 1: Khashoggi returns to Istanbul. At around 4.30pm, a three-person Saudi team arrives in Istanbul on a scheduled flight, checks in to their hotels then visits the consulate, according to Erdogan. The Turkish president says another group of officials from the consulate travel to a forest in Istanbul’s outskirts and to the nearby city of Yalova on a ‘reconnaissance’ trip. 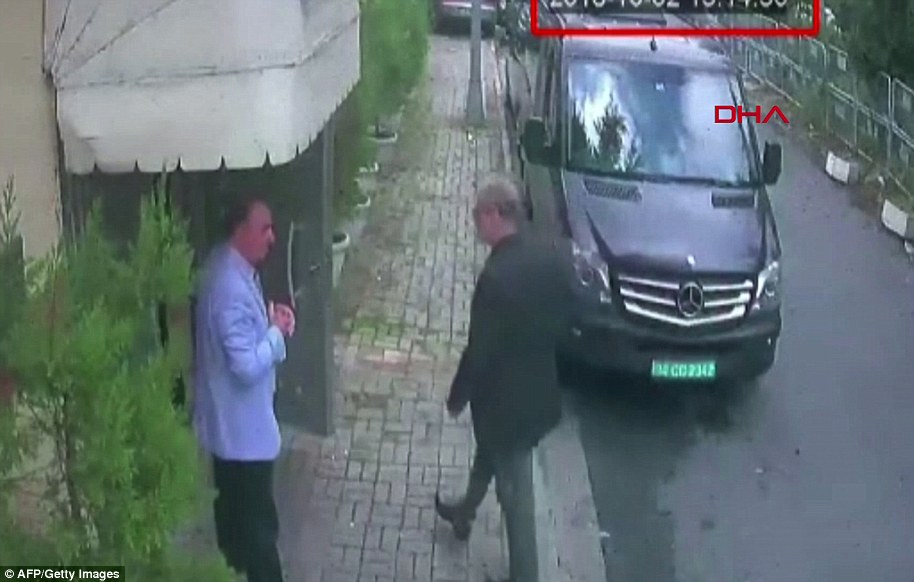 THE DAY OF HIS DISAPPEARANCE

3.28am, October 2: A private jet arrives at Istanbul’s Ataturk Airport carrying some members of what Turkish media will refer to as a 15-member Saudi ‘assassination squad.’ Other members of the team arrive by two commercial flights in the afternoon. Erdogan says the team includes Saudi security and intelligence officials and a forensics expert. They meet at the Saudi Consulate. One of the first things they do is to dismantle a hard disk connected to the consulate’s camera system, the president says.

11.50am: Khashoggi is called to confirm his appointment at the consulate later that day, Erdogan says.

1.14pm: Surveillance footage later leaked to Turkish media shows Khashoggi walking into the main entrance of the Saudi Consulate. No footage made public ever shows him leaving. His fiancee waits outside, pacing for hours.

5.50pm: Khashoggi’s fiancee alerts authorities, saying he may have been forcibly detained inside the consulate or that something bad may have happened to him, according to Erdogan.

7pm: A private plane from Saudi Arabia carries six members of the alleged Saudi squad from Istanbul to Cairo, the next day returning to Riyadh.

11pm: Seven members of the alleged Saudi squad leave on another private jet to Dubai, United Arab Emirates, which the next day returns to Riyadh. Two others leave by commercial flights.

Erdogan confirms reports that a ‘body double’ – a man wearing Khashoggi’s clothes, glasses and a beard – leaves the consulate building for Riyadh with another person on a scheduled flight later that day. 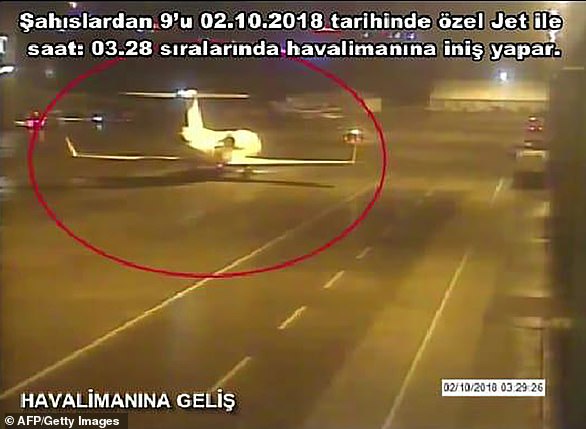 October 3: Khashoggi’s fiancee and the Post go public with his disappearance. Saudi Arabia says Khashoggi visited the consulate and exited shortly thereafter. Turkish officials suggest Khashoggi might still be in the consulate. Prince Mohammed tells Bloomberg: ‘We have nothing to hide.’

October 4: Saudi Arabia says on its state-run news agency that the consulate is carrying out ‘follow-up procedures and coordination with the Turkish local authorities to uncover the circumstances of the disappearance of Jamal Khashoggi after he left the consulate building.’

October 5: The Post prints a blank column in its newspaper in solidarity with Khashoggi, headlined: ‘A missing voice.’

October 6: The Post, citing anonymous Turkish officials, reports Khashoggi may have been killed in the consulate in a ‘preplanned murder’ by a Saudi team.

October 7: A friend of Khashoggi tells the AP that officials told him the writer was killed at the consulate. The consulate rejects what it calls ‘baseless allegations.’

October 9: Turkey says it will search the Saudi Consulate as a picture of Khashoggi walking into the diplomatic post surfaces.

October 11: Turkish media describes Saudi squad as including royal guards, intelligence officers, soldiers and an autopsy expert. Trump calls Khashoggi’s disappearance a ‘bad situation’ and promises to get to the bottom of it.

October 12: Trump again pledges to find out what happened to Khashoggi.

October 13: A pro-government newspaper reports that Turkish officials have an audio recording of Khashoggi’s alleged killing from his Apple Watch, but details in the report come into question.

October 14: Trump says that ‘we’re going to get to the bottom of it, and there will be severe punishment’ if Saudi Arabia is involved. The kingdom responds with a blistering attack against those who threaten it, as the manager of a Saudi-owned satellite news channel suggests the country could retaliate through its oil exports. The Saudi stock exchange plunges as much as 7 percent at one point. 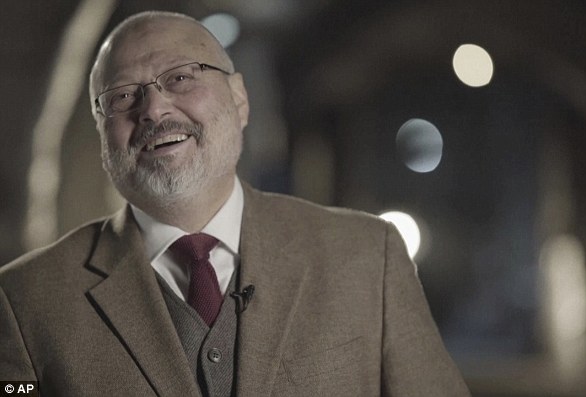 October 15: A Turkish forensics team enters and searches the Saudi Consulate, an extraordinary development as such diplomatic posts are considered sovereign soil. Trump suggests after a call with Saudi King Salman that ‘rogue killers’ could be responsible for Khashoggi’s alleged slaying. Trump says Secretary of State Mike Pompeo will travel to the Mideast over the case. Meanwhile, business leaders say they won’t attend an economic summit in the kingdom that’s the brainchild of Prince Mohammed.

October 16: A high-level Turkish official tells the AP that ‘certain evidence’ was found in the Saudi Consulate proving Khashoggi was killed there. Pompeo arrives for meetings in Saudi Arabia with King Salman and Prince Mohammed. Meanwhile, Trump compares the case to the appointment of now-Supreme Court Justice Brett Kavanaugh during his confirmation hearing, saying: ‘Here we go again with you’re guilty until proven innocent.’

October 17: Pompeo meets with Turkey’s president and foreign minister in the Turkish capital, Ankara. Turkish police search the official residence of Saudi Arabia’s consul general in Istanbul and conduct a second sweep of the consulate.

October 18: A leaked surveillance photograph shows a member of Prince Mohammed’s entourage walked into the consulate just before Khashoggi vanished there.

October 20: Saudi Arabia for the first time acknowledges Khashoggi was killed in the consulate, claiming he was slain in a ‘fistfight.’ The claim draws immediate skepticism from the kingdom’s Western allies, particularly in the U.S. Congress.

October 22: A report says a member of Prince Mohammed’s entourage made four calls to the royal’s office around the time Khashoggi was killed. Police search a vehicle belonging to the Saudi consulate parked at an underground garage in Istanbul.

CCTV emerges showing a Saudi intelligence officer dressed in a fake beard and Jamal Khashoggi’s clothes and glasses on the day he went missing.

October 23: Erdogan says Saudi officials murdered Khashoggi after plotting his death for days, demanding that Saudi Arabia reveal the identities of all involved.

November 4: Khashoggi’s sons Salah and Abdullah Khashoggi issue appeal for his remains to be returned so that he may be buried in Saudi Arabia.

November 10: President Erdogan says Turkey gave the audio recordings linked to the murder to ‘Saudi Arabia, to Washington, to the Germans, to the French, to the British’.

November 13: Turkish media reports that the luggage carried by the Saudi ‘hit squad’  included scissors, defibrillators and syringes that may have been used against Khashoggi.

November 15: Saudi Arabia’s public prosecutor announces that he is seeking the death penalty for five out of 11 suspects charged in the murder. Shalaan al-Shalaan said the person who had ordered the killing was the head of the negotiating team sent to repatriate him, and exonerated Crown Prince Mohammad bin Salman. On the same day, the U.S. Treasury announces sanctions against 17 Saudi officials, including the Consul General in Turkey, Mohammed Alotaibi.

November 18: Germany bans 18 Saudi nationals believed to be connected to the murder from entering Europe’s border-free Schengen zone. Berlin also announces it has as halted previously approved arms exports to Saudi Arabia amid the fallout.