President Donald Trump declared Monday that America had fallen in love with the Washington Nationals, while getting smitten with the team’s catcher – who whipped out a ‘Make America Great Again’ hat during the team’s White House visit.

‘America fell in love with the Nats baseball,’ the president commented from the Truman Balcony as a crowd of fans stretched out onto the South Lawn to celebrate the Nats 4-3 World Series win. ‘It’s all they wanted to talk about – that and impeachment.’

‘I like Nats baseball much more,’ the president said.

More than half of the team’s roster came to the celebration, with teammate Kurt Suzuki briefly putting on a MAGA hat. ‘I didn’t know that was going to happen,’ Trump said in awe.

Trump paid plenty of compliments for the other Nationals players too – telling Juan Soto ‘he’s got no hair problem,’ explaining to Ryan Zimmerman, who’s played on the team the longest, that he’s really loved around the city. Trump also called the Nats silly theme song ‘Baby Shark’ a ‘powerful little tune.’ It was being played by the military band as the team walked in. 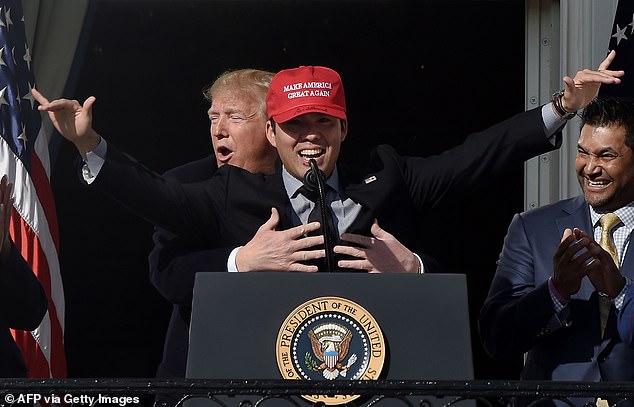 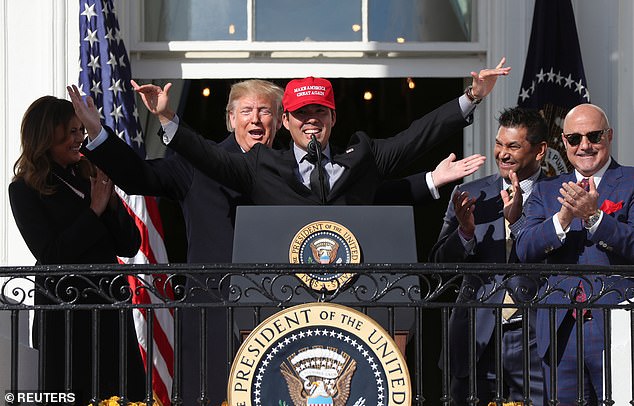 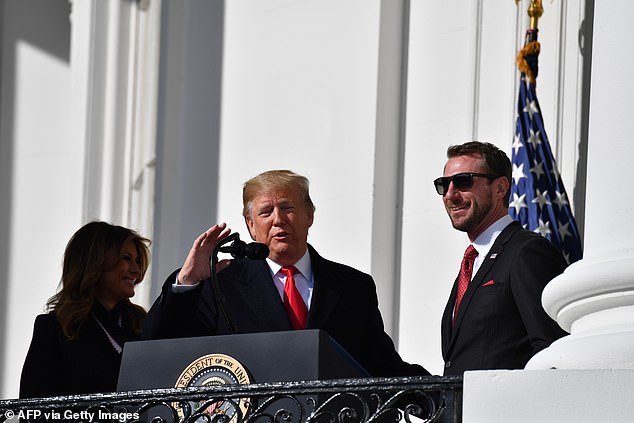 President Trump welcomed the winners of the 2019 World Series, the Washington Nationals, to the White House Monday 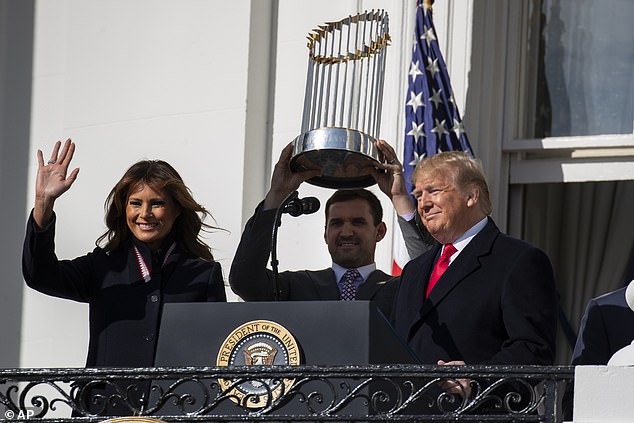 Ryan Zimmerman (center), who’s played on the team the longest, hoisted up the trophy as he stood between first lady Melania Trump (left) and President Trump (right) 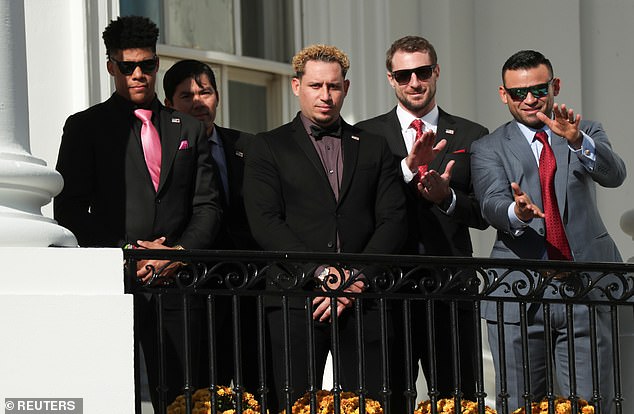 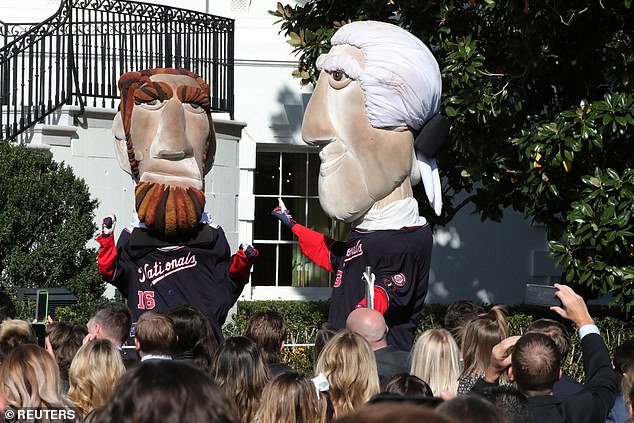 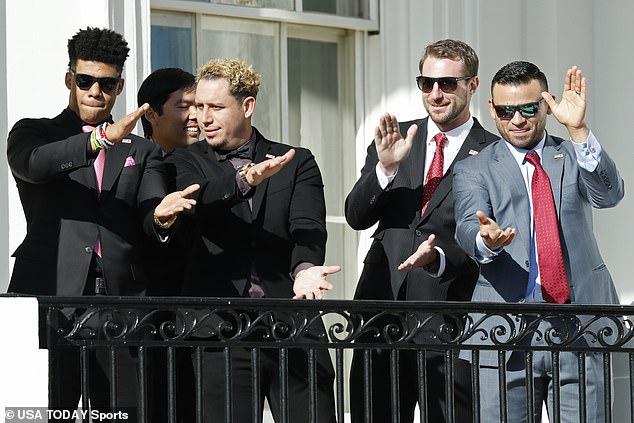 Washington Nationals players do the moves for their 2019 theme song ‘Baby Shark,’ which was being played by the military band 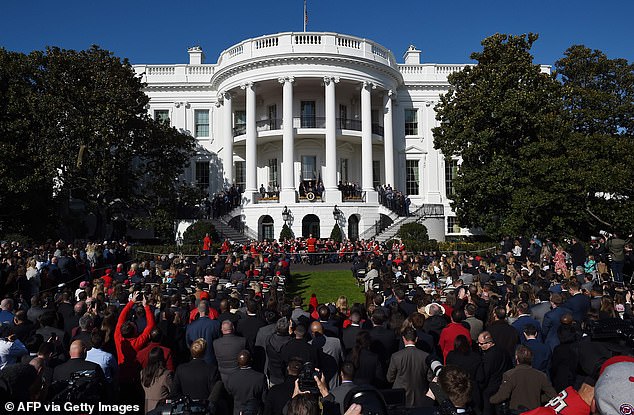 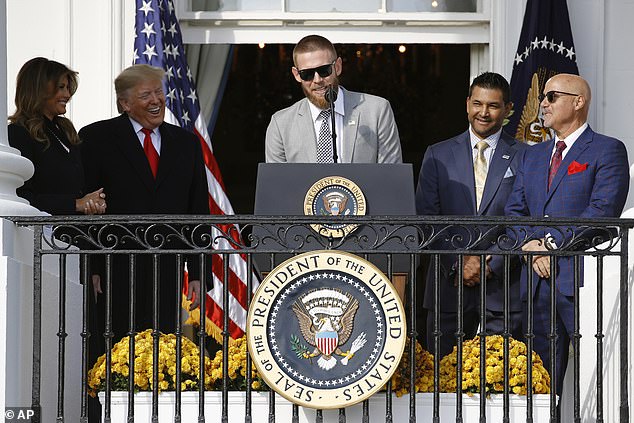 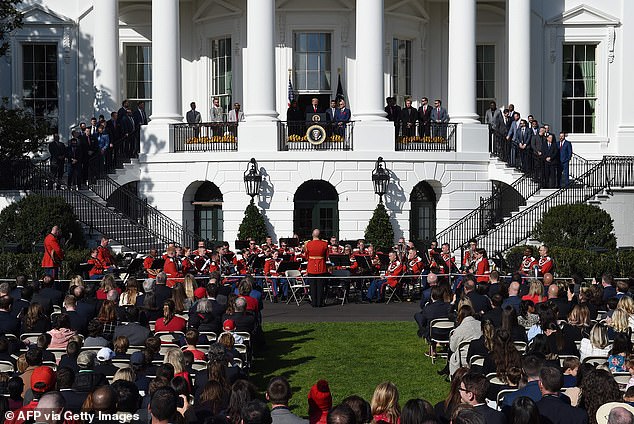 Strasburg, who pitched through an important Game 6, opted for free agency, though fans want to see him stick around.

On Wednesday, the Nats beat the Houston Astros in Game 7 in Texas – winning all four away games, even as they dropped three at home – including one with the commander in chief in attendance.

Their trip to the White House is the latest accolade for a team that marshaled a remarkable comeback after a poor start to their season. Trump recalled that too as he told the team’s story.

‘I’m sure the media was with you all the way,’ the president said sarcastically. ‘I remember some rough stories.’

The president talked about how the Nats won their first two away games, but came back to D.C. to lose.

‘It was looking like it was going to be easy, right?’ Trump said. ‘And then something bad happened. To the best of my knowledge you lost three games … we won’t talk about that.’

The Sunday game marked President Trump’s first foray into Nationals stadium, where he was loudly booed by fans – and subjected to chants of ‘Lock him up!’ from the crowd. The chant was inspired by what the president’s supporters would often shout about 2016 Democratic presidential nominee Hillary Clinton. 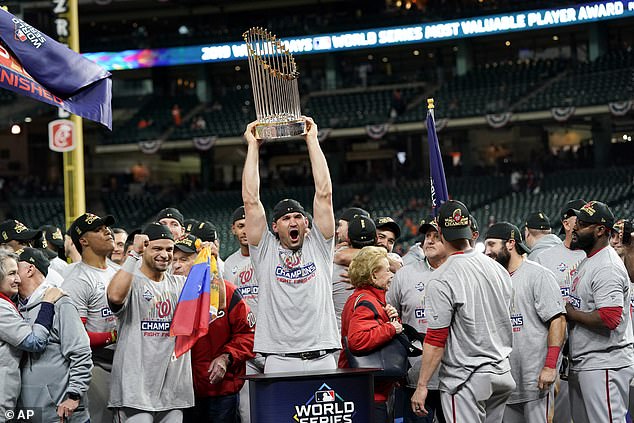 Washington Nationals first baseman Ryan Zimmerman celebrates after the Nationals won Game 7 of the World Series. President Trump will host them at the White House Monday 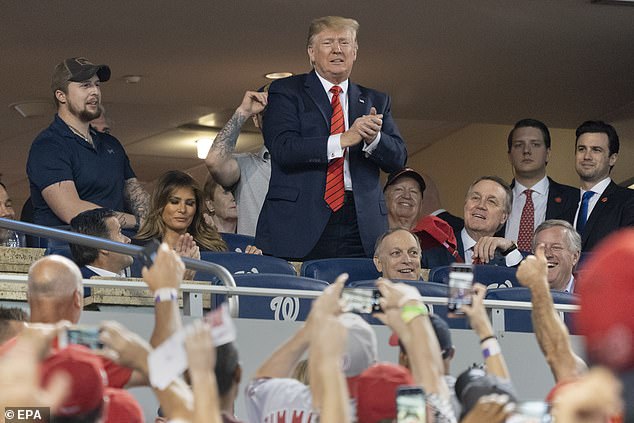 President Trump arrived at Nats stadium last Sunday to cheer on the team during their World Series run, only to be booed by the liberal D.C. crowd .

Back in Houston for Game 6, the Nationals lost ground thanks to a controversial call. Nationals manager Dave Martinez threw such a temper tantrum he got thrown out.

‘We know how you feel,’ Trump said with a grin Monday when he brought up Game 6. ‘I thought that was a terrible call personally.’

Trump was booed a second time at Nationals stadium when an ad for his re-election bid aired during Game 7. During the away games, Nationals fans could still watch the games on giant televisions at the park.

The ad cost the Trump campaign $250,000 to air nationally, according to the Associated Press.

Monday’s team event at the White House was friendlier, with only one player – Sean Doolittle – publicly saying he planned not to come out of protest, prior to the gathering.

‘There’s a lot of things, policies that I disagree with, but at the end of the day, it has more to do with the divisive rhetoric and the enabling of conspiracy theories and widening the divide in this country,’ Doolittle explained in an interview with The Washington Post. ‘My wife and I stand for inclusion and acceptance, and we’ve done work with refugees, people that come from, you know, the “shithole countries,”‘ Doolittle added, pointing to comments Trump made behind closed doors in January 2018 about Haiti, El Salvador and African nations. 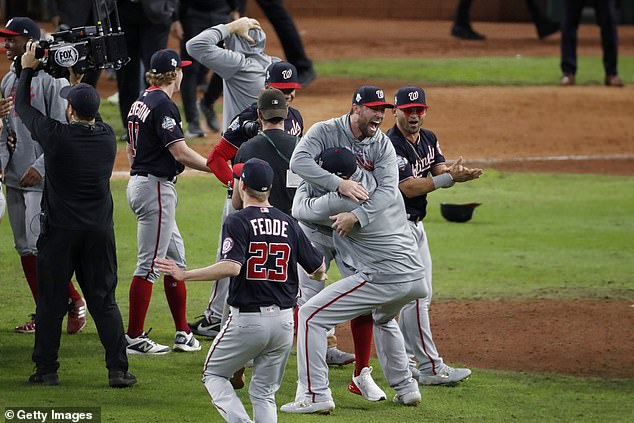 The Washington Nationals celebrate after winning a final game in Houston last Wednesday, clinching the World Series title by beating the Astros in four games on their Texas turf 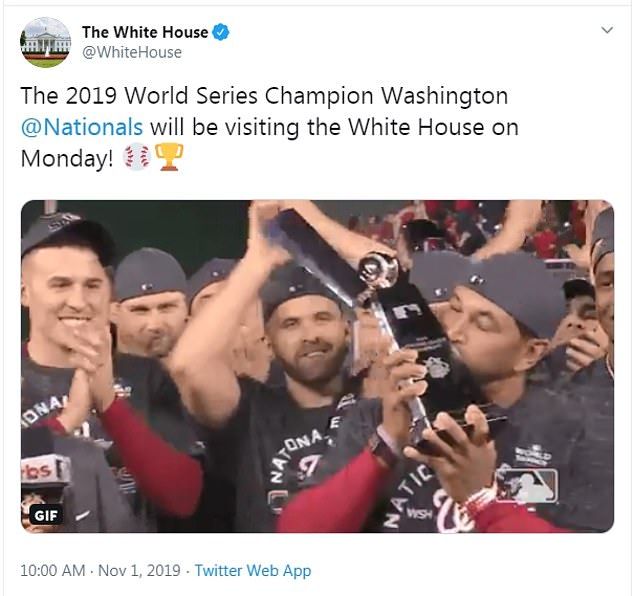 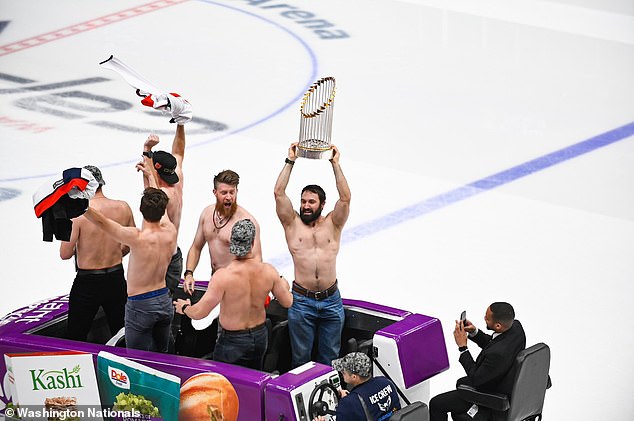 At the White House Monday, Nats manager Dave Martinez alluded to the shenanigans that happened Sunday night when the Washington Nationals went to a Washington Capitals hockey game 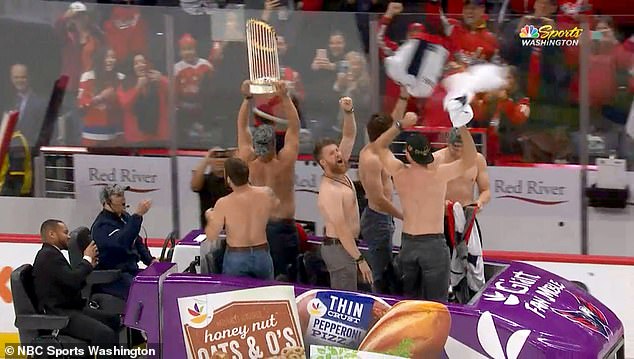 ‘I don’t want to take up too much time because apparently my boys don’t like wearing shirts anymore,’ said Washington Nationals manager Dave Martinez, referring to the baseball players’ shirtless Zamboni ride

A handful of other Nationals’ players didn’t attend day-of.

Martinez referenced that some shenanigans had happened the night before.

‘My throat’s a little hoarse,’ the Nats manager said. ‘We met with the Caps last night and things got a little interesting.’

‘I don’t want to take up too much time because apparently my boys don’t like wearing shirts anymore,’ Martinez said.

Several Nats players stripped off their shirts while they rode around in a Zamboni at the Sunday night Washington Capitals hockey game.

The Nationals were also honored with a parade in downtown Washington Saturday.

At the White House event, the Nationals gifted Trump his own jersey.

Doolittle isn’t the first athlete to stick up his nose at a Trump White House visit.

Soccer star Megan Rapinoe said she was ‘not going to the f***ing White House’ prior to winning the World Cup this year. The president responded that she should ‘win before she talks.’ Rapinoe did accept a Capitol Hill invite from Rep. Alexandria Ocasio-Cortez, one of the most liberal members of Congress.

The 2017 NBA champions, the Golden State Warriors, declined their invitation after winning the 2017 championship. 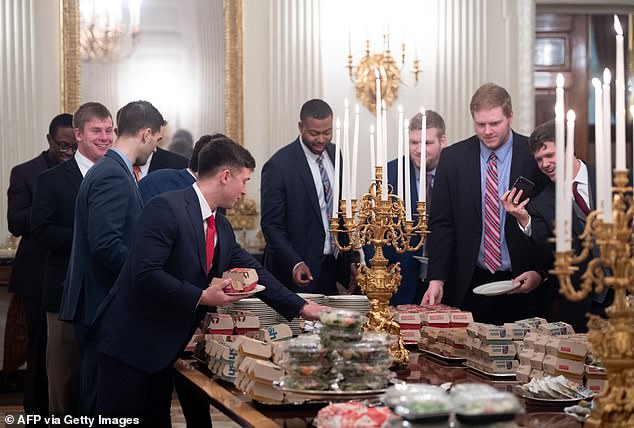 President Trump hosted the 2018 College Football Playoff National Champions, the Clemson Tigers, to the White House in January amid the government shutdown, and used that as an excuse to provide them with a Trump favorite, fast food

The 2018 Super Bowl champions, the Philadelphia Eagles, got themselves disinvited from the White House after several team members mouthed off. Trump still held a patriotic event in the South Lawn that day, where he railed against NFL player who take a knee during the Star-Spangled Banner out of protest.

He’s made political points when athletes have shown up too.

In January, amid the longest government shutdown in U.S. history, the president paid out of pocket to feed his guests, the Clemson Tigers football team, serving them his fast food favorites: McDonald’s, Wendy’s, Burger King and Domino’s.

Trump blamed the shutdown, and the decrease in White House kitchen staff, for the cheap feast, but he’s served a similar selection to visiting guests since.

Zuckerberg should pay price for damage to democracy – Hillary Clinton