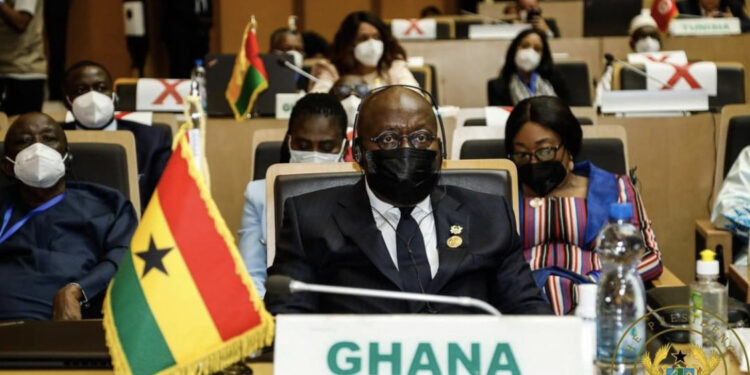 The new state-of-the-art assembly plant is said to have the capacity to assemble 5,000 new vehicles annually.

Speaking at the commissioning, President Akufo-Addo noted that the importation of motor and transport vehicles constitutes the leading import into Ghana, estimated at $1.5 billion annually.

He noted that the emergence of Covid-19 has emphasised the need for Ghana to be self-reliant and produce domestically.

He said the presence of the facility comes to support the industrial transformation agenda to diversify the economy.

“Today marks yet another important milestone in our quest to make Ghana a new manufacturing hub for Africa, in particular, realise our vision of becoming a leading player in the automobile industry in Africa. I’m delighted that in the automobile sector, we have attracted investment from a number of global iconic brands,” he added.

The President noted government recognises that the establishment of assembly plant alone does not create the significant deployment opportunities expected from the automotive industry. 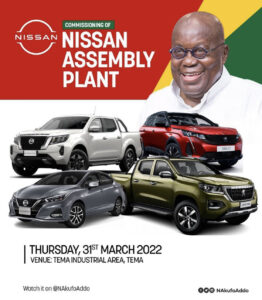 In addition to this, the President said the component manufacturing policy that will provide targeted incentive to attract various investors to manufacture domestically components and parts is being developed.

“The rolling out of this policy will lead to harnessing the capacity of local value chained actors particularly technicians, operating in the Suame Magazine, Abosokai and others across the country to play critical role in component manufacturing and supply development programme,” he further explained.

Present at the commission was Minister for Trade and Industry, Alan Kyerematen. He said the facility will create the needed jobs for Ghanaians.

He added that the growth of the automobile industry will also attract foreign direct investment.

“We believe that this is just not going to bring investment in the auto industry into our country but will bring other investments,” he said.

The Nissan plant, the most modern in Africa costs $9million. It will also produce Peugeot vehicles.

Managing Director of Nissan, Salem Kalmoni, said the rule of law and the general democratic climate influenced the decision to establish a plant in Ghana.

Mr Salem Kalmoni indicated that “Ghana today, stands as a benchmark for the African automobile industry.”

President Akufo-Addo on Tuesday, June 29, 2021, commissioned the Toyota Tsusho Vehicle Assembly Plant, which is assembling some models of Toyota and Suzuki vehicles in the country.

At the event, he said that government will continue to create the enabling environment to boost the profitability of the emerging automotive sector in Ghana.