in Entertainment, World News
Reading Time: 9 mins read
0 0
A A
0 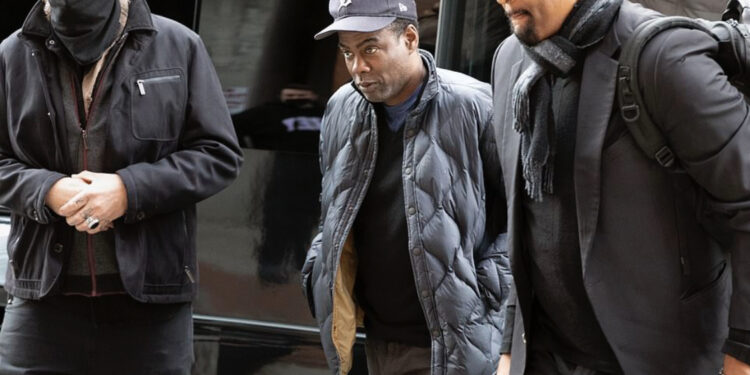 Chris Rock on Wednesday night told an audience at his sold-out comedy show in Boston that he was ‘still processing’ being slapped on stage by Will Smith at the Oscars, in his first public response to Sunday’s shocking incident.

Dressed all in white, Rock, 57, took to the stage at the Wilbur Theatre and asked the excited crowd: ‘Sooooo, how was your weekend?!’

With the crowd all handing over their cell phones before the show began, the former Saturday Night Live star was greeted with a long standing ovation in the first of two sets he performed Wednesday as part for his Ego Death Tour.

However, the usually-uninhibited funnyman quickly shut down any hopes he would crack jokes about the slap heard round the world to the 3,000 fans in the audience, some of whom reportedly paid nearly $1,000 for a ticket.

‘I had written a whole show before this weekend.

‘I’m still processing what happened, so at some point I’ll talk about that s***. It’ll be serious. It’ll be funny, but right now I’m going to tell some jokes.’

Rock skirted the subject again in his second set but seemingly confirmed that he has not spoken with Smith since being smacked in the jaw on live television.

‘I haven’t talked to anyone, despite what you heard,’ Rock said.

Twice during the first show, a couple of members of the audience shouted: ‘Will Smith,’ drawing a far louder chorus of boos.

Following the heckling, DailyMail.com saw one man being dragged out by security guards.

Police confirmed that the man was maced and kicked out of the theater by multiple security guards.

The kerfuffle disrupted Rock, who responded the second time by saying: ‘Is this how this tour is going to go?’

Later Rock commented on his life in general, saying that ‘except for some weird things, life is pretty good right now.’

The crowd laughed, knowing exactly what the ‘weird things’ referred to.

Rock seemed unfazed as he delivered his typically high-energy routine, keeping the crowd roaring and gasping as he joked about everything from overweight people at Disney parks, to his decision to get a vasectomy after seeing a 78-year-old Robert De Niro walking around with a child.

He joked about how he spends all his money on women, and wryly recommended his ex-wife’s divorce lawyer to the audience, for winning her half his fortune without her ever telling a joke.

Rock took the stage shortly after it emerged that Smith had refused to leave the Oscars after he was approached by the heads of the Academy of Motion Pictures.

The Academy said on Wednesday he ignored the request from the president, David Rubin, and CEO, Dawn Hudson, to leave, and that he had violated their code of conduct.

The 53-year-old actor marched onto the stage on Sunday and hit Rock, after Rock told a joke about Smith’s wife.

Shortly after, Smith was announced as the winner of the best actor award and went up to collect his statuette to a standing ovation from many of his peers. 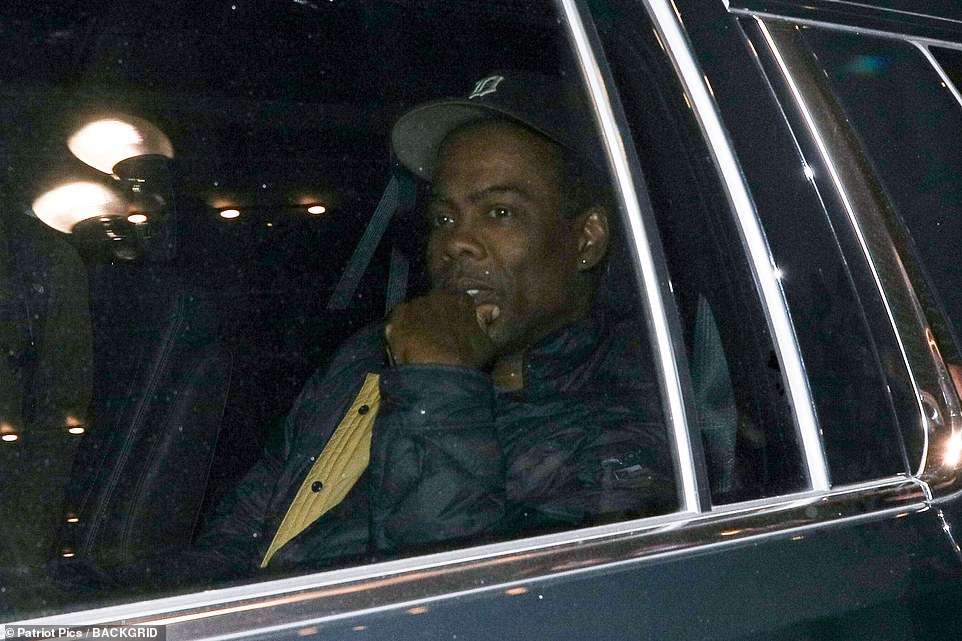 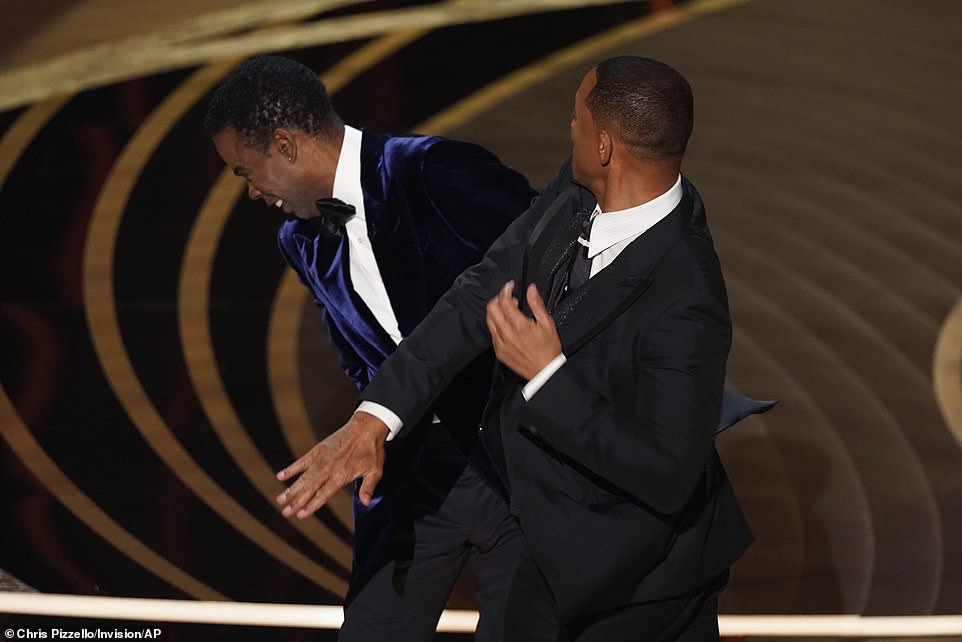 Will Smith slapped Chris Rock onstage at the Oscars Sunday after the comedian made a joke about his wife Jada Pinkett Smith. The Academy revealed on Wednesday that Smith was asked to leave, but refused 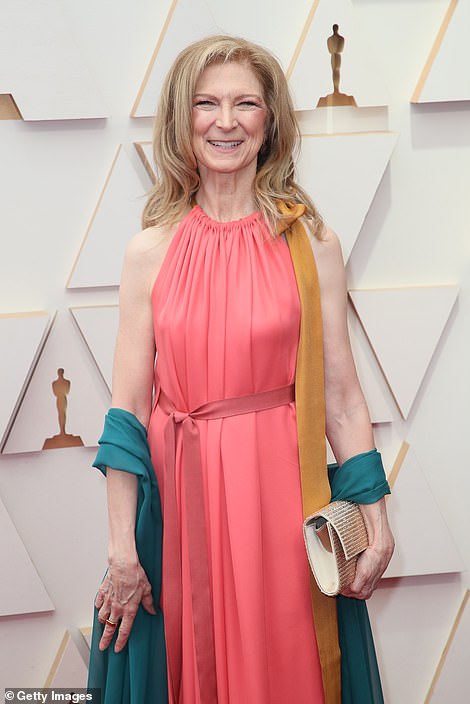 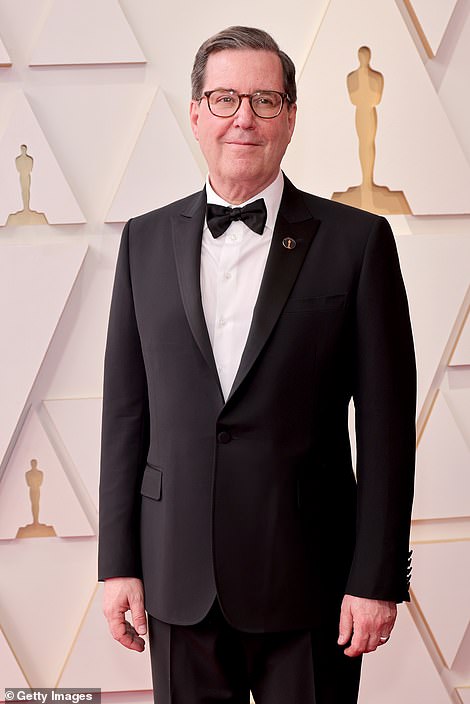 Dawn Hudson, the CEO of the Academy, asked Smith to leave, along with David Rubin, the president. Smith ignored them 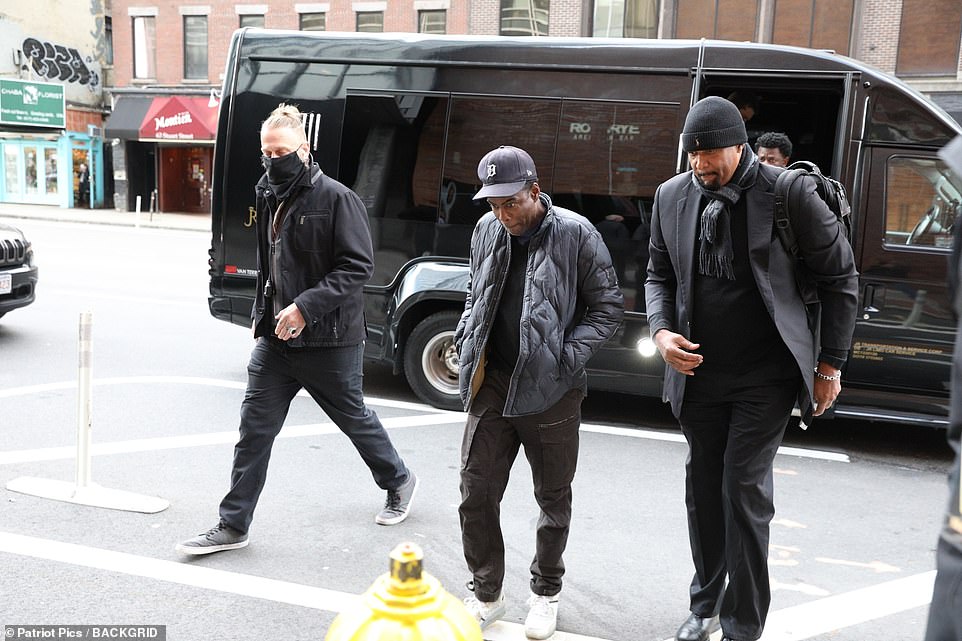 Rock looked downbeat amid the drama, which overshadowed the Oscars and deeply divided Hollywood. Smith apologized to him on Monday night, but Rock is yet to respond 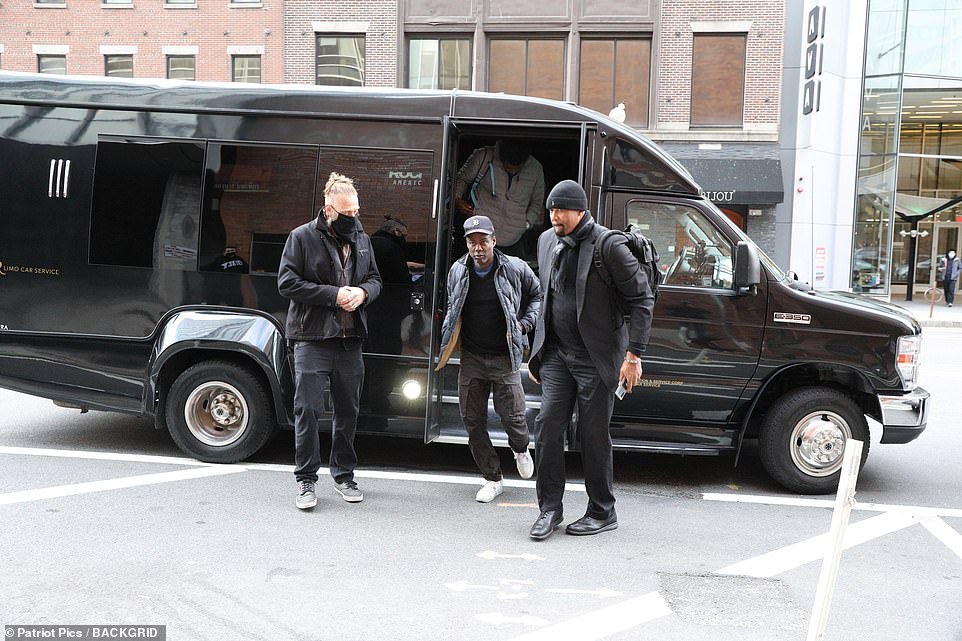 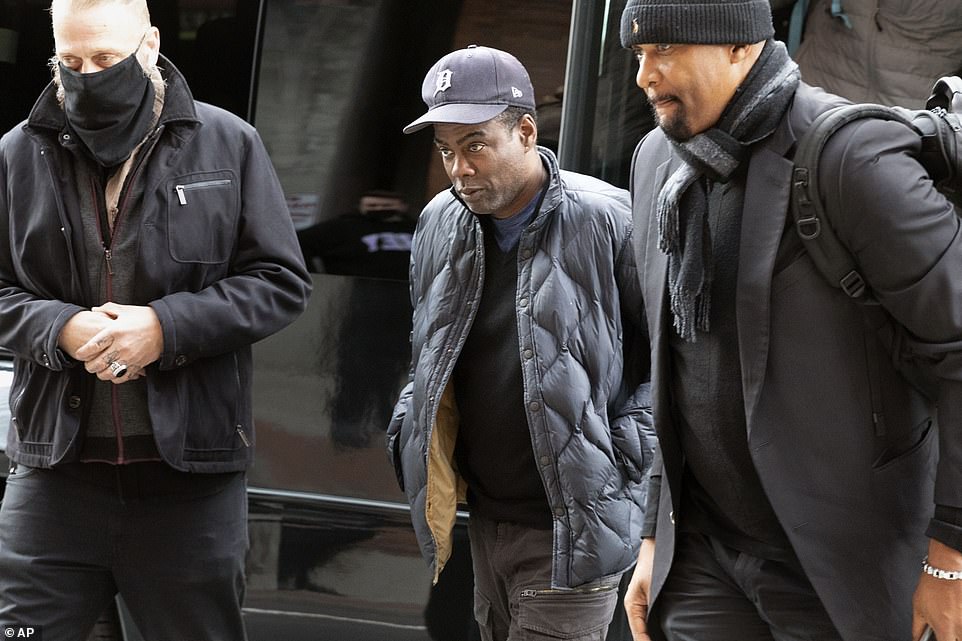 Many expressed support for the South Carolina-born comedian, saying that Smith was out of order when he marched onto stage and hit Rock for joking about his wife’s alopecia 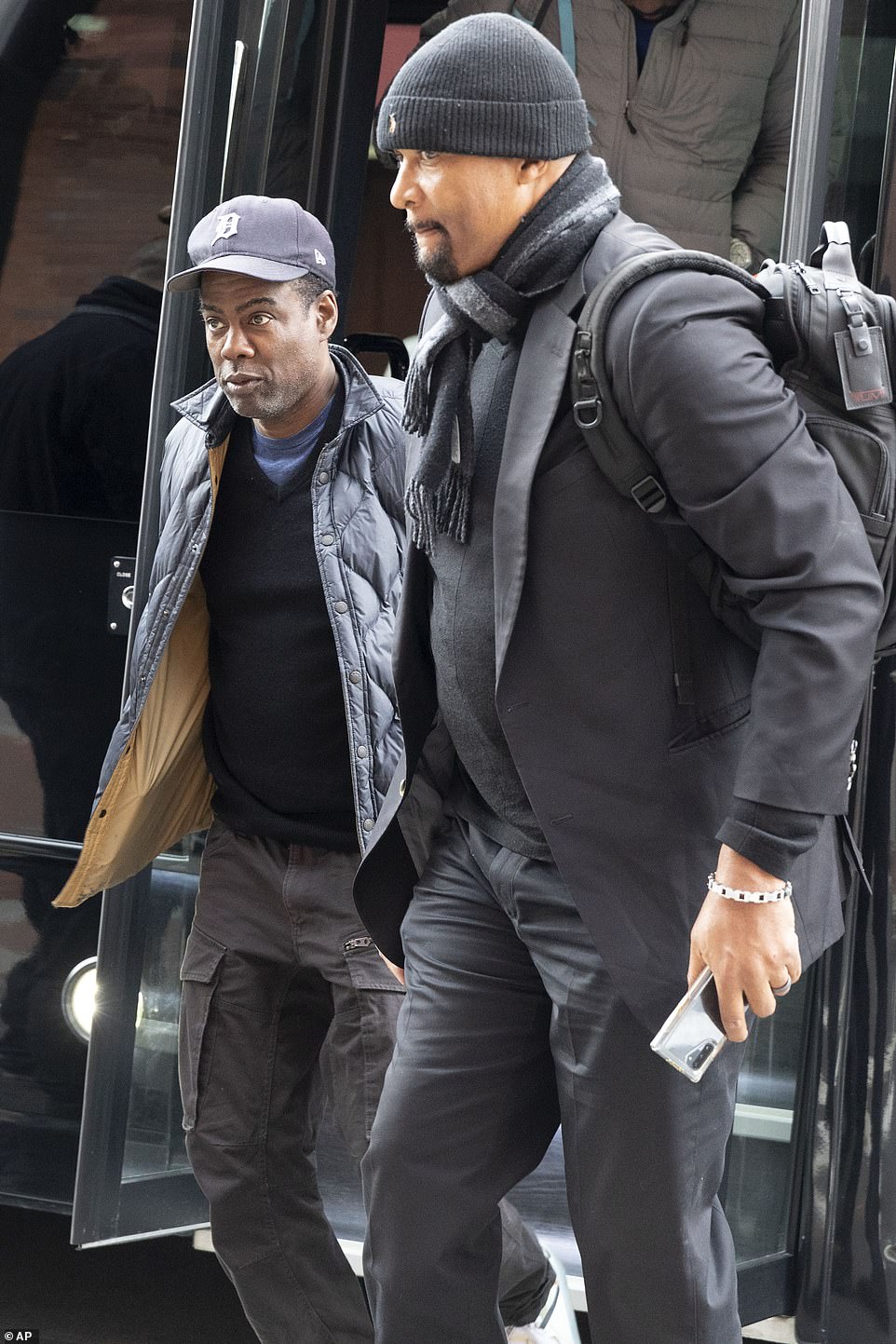 Others have condemned Rock for joking about Jada Pinkett Smith’s condition, which is when the autoimmune system attacks the scalp and causes hair loss

The Academy’s statement in full

The Board of Governors today initiated disciplinary proceedings against Mr. Smith for violations of the Academy’s Standards of Conduct, including inappropriate physical contact, abusive or threatening behavior, and compromising the integrity of the Academy.

Consistent with the Academy’s Standards of Conduct, as well as California law, Mr. Smith is being provided at least 15 days’ notice of a vote regarding his violations and sanctions and the opportunity to be heard beforehand by means of a written response. At the next board meeting on April 18, the Academy may take any disciplinary action, which may include suspension, expulsion, or other sanctions permitted by the Bylaws and Standards of Conduct.

Mr. Smith’s actions at the 94th Oscars were a deeply shocking, traumatic event to witness in-person and on television. Mr. Rock, we apologize to you for what you experienced on our stage and thank you for your resilience in that moment. We also apologize to our nominees, guests and viewers for what transpired during what should have been a celebratory event.

Things unfolded in a way we could not have anticipated. While we would like to clarify that Mr. Smith was asked to leave the ceremony and refused, we also recognize we could have handled the situation differently.

On Wednesday the Academy said it had launched ‘disciplinary procedures’ against Smith, and confirmed he ignored their request for him to leave his seat. They also apologized to Rock.

Smith was asked to leave by David Rubin, the president of the Academy, and CEO Dawn Hudson, TMZ reported.

Two sources told the site Rubin and Hudson were ‘furious’ at Smith, and there was plenty of ‘yelling’ and ‘heated conversations’ backstage with his reps after the incident.

One source said the Academy officials were ‘apoplectic.’

Rock, who is yet to respond to Smith’s attack or his apology, will be on stage in Boston on Wednesday night for his first show since the incident.

‘The Board of Governors today initiated disciplinary proceedings against Mr. Smith for violations of the Academy’s Standards of Conduct, including inappropriate physical contact, abusive or threatening behavior, and compromising the integrity of the Academy,’ their statement said.

‘Mr. Smith was asked to leave the ceremony and refused, [but] we also recognize we could have handled the situation differently.’

Smith will receive 15 days notice of a vote as well as an opportunity to be heard by written response.

At the next board meeting – scheduled for April 18 – the Academy may take action that could include ‘suspension, expulsion, or other sanctions permitted by the Bylaws and Standards of Conduct.’

In his acceptance speech, Smith apologized to the Academy of Motion Picture Arts and Sciences – whose members vote for the awards, and who stages the ceremony – but stopped short of apologizing to Rock.

Smith initially laughed off the attack, writing on Instagram on Sunday evening: ‘You can’t invite people from Philly or Baltimore nowhere!!’

Yet as the gravity of the situation became clear, Smith then posted a public apology to Instagram 24 hours after the ceremony, saying he wanted to say sorry formally to Rock.

He said his behavior was ‘unacceptable and inexcusable’ and left him ’embarrassed’.

‘I would like to publicly apologize to you, Chris,’ he wrote.

‘I was out of line and I was wrong. I am embarrassed and my actions were not indicative of the man I want to be.

‘There is no place for violence in a world of love and kindness.’ 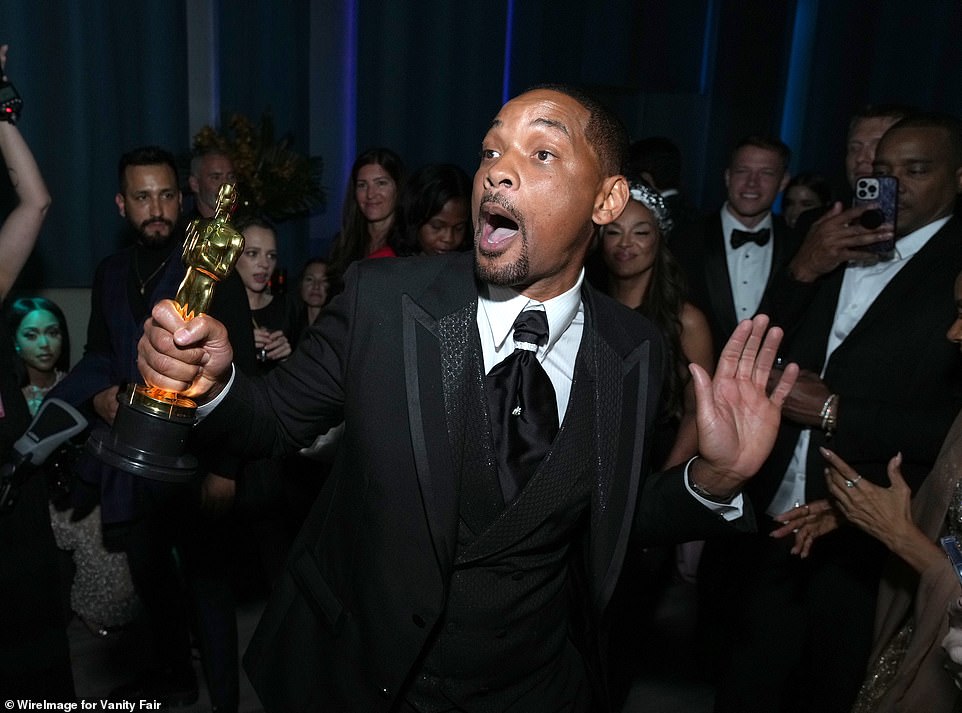 Smith brushed off a tumultuous night by partying to celebrate the greatest achievement of his career: Best Actor at the Oscars