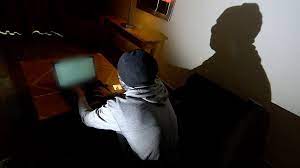 Fraudsters might have stolen as much as £37billion of Covid money from the public purse, experts say.

The staggering sum, based on an analysis by academics from the University of Oxford, is vastly higher than previous estimates, and more than double the £16billion presented as a possibility to the Public Accounts Committee earlier this year.

In a damning review of the latest evidence from several public bodies, the report says criminal organisations – who were ‘fraud ready’ before the pandemic – took advantage of the ‘reckless’ lack of anti-fraud measures to siphon huge amounts from Government initiatives such as the Bounce Back Loan Scheme and Eat Out To Help Out.

Around 374 such schemes were introduced by various Government departments during 2020 and 2021 to support individuals and businesses hit hard by Covid measures, as well as to further research and support vaccine development.

The National Audit Office’s Covid cost tracker estimates that they have cost £370billion to implement. 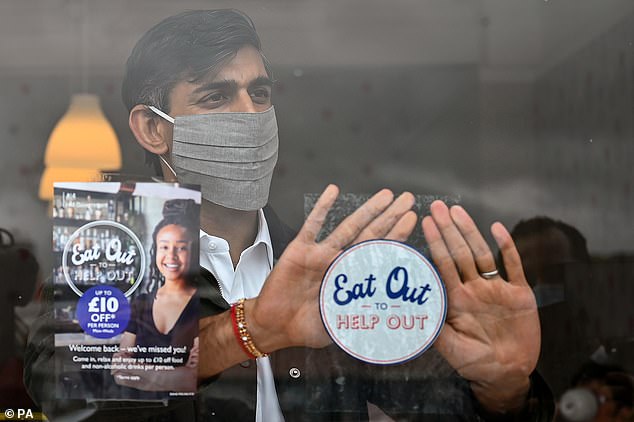 Analysis by University of Oxford academics found that huge amounts of money put into Covid support schemes were siphoned from Government initiatives such as the Bounce Back Loan Scheme and Eat Out To Help Out. Pictured: Rishi Sunak places an ‘Eat Out to Help Out’ sticker in the window of a business

But the Oxford team’s review, which was given to The Mail on Sunday ahead of being published Saturday, concludes ‘at least ten per cent’ of the cash – equivalent to £37billion, or one third of the total NHS annual budget – is likely to have been lost to fraud.

‘When the decision to put into place severe and unprecedented restrictions was taken, governmental support for those worst affected was a sensible and humane act, regardless of the sums involved,’ the review read.

‘If we add the lack of pandemic preparation, the government’s appetite for hasty risk-taking fed by flawed predictions of modellers and general media frenzy, together with the fragmentation of anti-fraud activities, all these factors created a greenhouse effect for criminals to fleece the public purse.’

John O’Connell, chief executive of the TaxPayers’ Alliance, last night condemned the scale of the fraud highlighted by the review.

‘Abuse of the Covid schemes will appal hard-working taxpayers, who will ultimately have to foot the bill,’ he said.

‘Support had to be deployed quickly without reams of red tape tying things up, but the scale of the abuse will shock those who played by the rules while worrying about their jobs and families.

‘Ministers should protect taxpayers with more stringent measures to fine and prosecute the fraudsters that fiddled the system.’

The detailed analysis, which focused on the largest of the government schemes, was carried out by Dr Tom Jefferson and Professor Carl Heneghan, from the CEBM.

They have helped produce a series of reports which exposed Government failings during the pandemic. They had previously investigated discrepancies in the way PCR tests were carried out and how Covid deaths were recorded.

Last month, respected epidemiologist Prof Heneghan, director of the CEBM, found himself at the centre of a censorship storm when he was briefly banned from Twitter after the Covid deaths report, highlighted in The Mail on Sunday, was wrongly flagged as ‘fake news’.

Their most recent report investigates publicly available information from Parliamentary committees, FOI responses and documents from the National Audit Office to estimate the full extent of fraud during the pandemic.

It finds the losses are ‘between 8.5 per cent and 38.8 per cent’ of the total, depending on the specific programme. 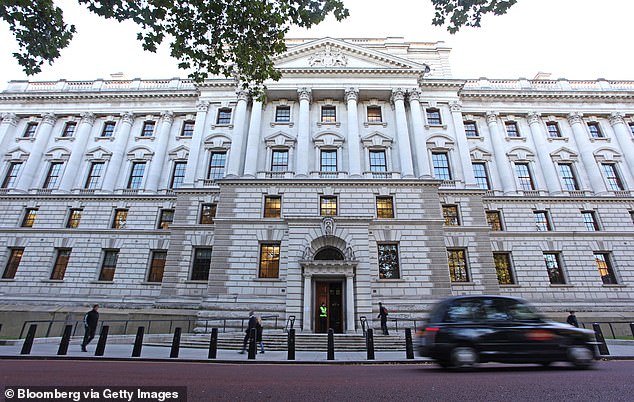 The Eat Out To Help Out Scheme, for example, introduced in August 2020 in a bid to encourage people back into restaurants following the first lockdown, cost £849million. Diners eating on certain days were given a 50 per cent discount – up to £10 – which was refunded to restaurants by HMRC.

But around 8.5 per cent of the claims by restaurants – which amounts to £72million – are estimated to be fraudulent.

This means one in 12 meals provided were ‘ghost meals’ which were never served, the review says.

One café owner in mid-Wales described how there was ‘no official form to fill in’ and establishments were just told to ‘keep a tally’.

‘I’ve kept all my pieces of paper where I jotted things down along with my till receipts just in case, but no-one’s asked for them,’ she said. ‘I was just paid back the money two days after submitting an iPhone picture of some words on a blank sheet of paper.

Hannah Bernard said her bank had asked government officials for up-to-date figures on the turnover of borrowers before handing out bounceback loans in 2020, but had been told it was not available.

It meant that, instead, the bank had to ask the business what its turnover was, and hope it told the truth.

During the rollout of the scheme, the amount a business could borrow was based on turnover.

Ms Bernard, who is the head of business banking at Barclays, told the Business, Energy and Industrial Strategy Committee today: ‘The scheme necessitated a lot of self-attestation, particularly the businesses’ turnover.

‘Ideally we would have wanted an HMRC data feed so we could have checked the turnover they were stating.

‘We made the suggestion, it wasn’t available, so we had to go with the self-attestation.’

She later added that of the 7.5% of loans that the Government estimates might have been taken out fraudulently, a vast majority would have been due to self-attestation of turnover.

Barclays’ data currently shows around 1.5% of fraud in the scheme, but Ms Bernard said this could rise.

Ms Bernard said it is possible that many of the businesses which inflated their turnover will still pay back their loans and the taxpayer will not lose out.

It was unclear from Ms Bernard’s answer whether HMRC had the data at the time.

According to a National Audit Office report, the British Business Bank, which ran the scheme on behalf of the Government, identified turnover misstatement as the top fraud risk in October 2020.

Ms Bernard’s comments came at a meeting where HSBC revealed it had taken it months longer than other banks to make sure that it was not giving bounceback loans to companies which had borrowed from one of its rivals.

The bank said it had not put in place a full duplicate check on all applicants until December 8.

The British Business Bank had put what the National Audit Office called a ‘straightforward’ way of checking for duplicates in June, already too late to prevent many duplicate applications.

Other banks said it had taken them a matter of weeks to implement the duplicate checks.

‘Most people are good. But the door was open to fraud.’

The Bounce Back Loan Scheme, which cost £47billion and has distributed Government-backed loans of up to £50,000 to small and medium-sized businesses affected by the pandemic, is also facing significant losses due to fraud.

The true scale of any criminal activity is yet to be established, but officials from the Department for Business, Energy and Industrial Strategy told MPs losses – which includes companies not being able to pay back loans – could reach 37 per cent of the total.

Around 7.5 per cent, or £3.5billion, could be fraud, according to Permanent Secretary Sarah Munby.

But not all of this was due to the need for applications to be processed quickly, the review notes.

He told the Treasury Committee last month that fraud checks in relation to the Bounce Back Loan Scheme were ‘just a “Dad’s Army” operation as they were lending money to companies that did not even exist before Covid-19 broke out, because of a total naivety in the system and not putting in proper checks’.

He added: ‘The only thing I can say to you is that the average age of a Treasury official is 29 and the turnover of staff in there is somewhere between 20 per cent and 25 per cent a year.

They are very bright in a standard way – they went to a good university and got a good degree – but they have no life experience.’

The Oxford team analysed Companies’ House data to see whether there was an increase in the number of new companies incorporated during the pandemic.

This is also well above what might be expected given the modest increases of around four per cent during previous years, the review found, which it described as ‘unexplained’.

Dr Jefferson said: ‘Obviously we have no idea whether these companies were set up simply to benefit from these schemes.

‘But it costs £12 to file a new company with Companies House. All you need is a frontman at an address in the UK and anyone, anywhere in the world, might have benefited from these payouts.’

The broad conclusion of the review is that criminality may have stripped up to 10 per cent of the financial aid funds, based on an estimate made to MPs by one of the country’s most senior civil servants, Permanent Secretary to the Treasury Sir Tom Scholar.

HMRC’s Taxpayer Protection Task Force is forecast to recover around £1billion by the end of March 2023.

But the total lost could well exceed £37billion. The NAO Covid cost tracker has not been updated since September 2021, so the expenditure – and fraud – is likely to rise, according to Dr Jefferson.

‘I’m not sure we’ll ever know how much has been lost,’ he said. ‘The faults in the system were there before the first lockdown, and as far as we know have still not been addressed. An amount of fraud is simply built-in, a fact of life.’

A HM Treasury spokesperson said: ‘Fraud is totally unacceptable, and we’re taking action on multiple fronts to crack down on anyone who has sought to exploit our schemes and bring them to justice.

‘Last year we stopped or recovered nearly £2.2 billion in potential fraud from the Bounce Back Loan Scheme and £743m of over-claimed furlough grants.

‘We’ve also invested over £100m in a Taxpayer Protection Taskforce made up of nearly 1,300 staff – which is expected to recover an additional £1 billion of taxpayers money.’

UKRAINE WAR:Ukraine says it has recaptured city of Brovary but warns of Russian mines