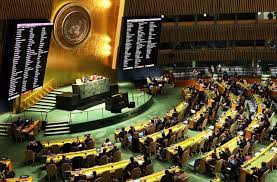 Ukraine’s Foreign Minister Dmytro Kuleba has responded to the news that Russia has been suspended from the UN’s Human Rights Council.

Kuleba said: “War criminals have no place in UN bodies aimed at protecting human rights. Grateful to all member states which supported the relevant UNGA resolution and chose the right side of history.”

More now on that vote moments ago to suspend Russia from the UN’s Human Rights Council during a session in New York.

Ninety-three countries voted in favour of the move, 24 against, and there were 58 abstentions.

Among the countries who supported the suspension were the US, EU nations, the UK, and of course Ukraine itself.

China, Syria, and Belarus were among those who voted against the motion.

And India, Egypt, and South Africa were among the nations which abstained.