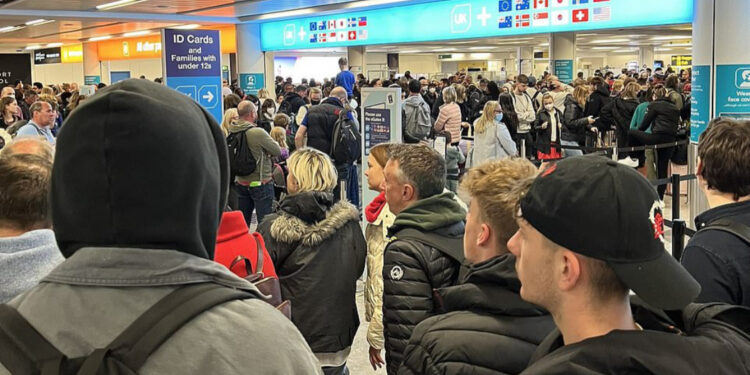 Passengers at airports have again this morning been hit by lengthy queues as the head of the Civil Aviation Authority made a rare intervention to warn them as the Easter getaway nightmare deepened.

Manchester and Gatwick saw long lines form in the early hours as staff seemed unable to clear them quick enough.

Several airlines and airports are struggling to cope with staff sickness and shortages, with a total of more than 100 daily flights being cancelled by easyJet and British Airways.

Today BA grounded 68 planes to locations including Athens and Prague, with Easyjet stopping 42, according to travel journalist Simon Calder.

And in Kent the M20 had to be shut due to 3,500 lorries stuck due to the suspension of P&O’s ferries.

Again Manchester Airport –  whose managing director Karen Smart stepped down this week – bore the brunt of of the worst of the queues this morning.

Alan Wilson questioned if it had all of security closed when he arrived just before 3am.

He posted on Twitter: ‘When you arrive at Manchester Airport is ALL of security closed?

‘Thus letting the queue build up, you’d assume they would try to avoid this with negative press they’d had.

‘It’s not even 3am and they’re allowing queues to form.’ 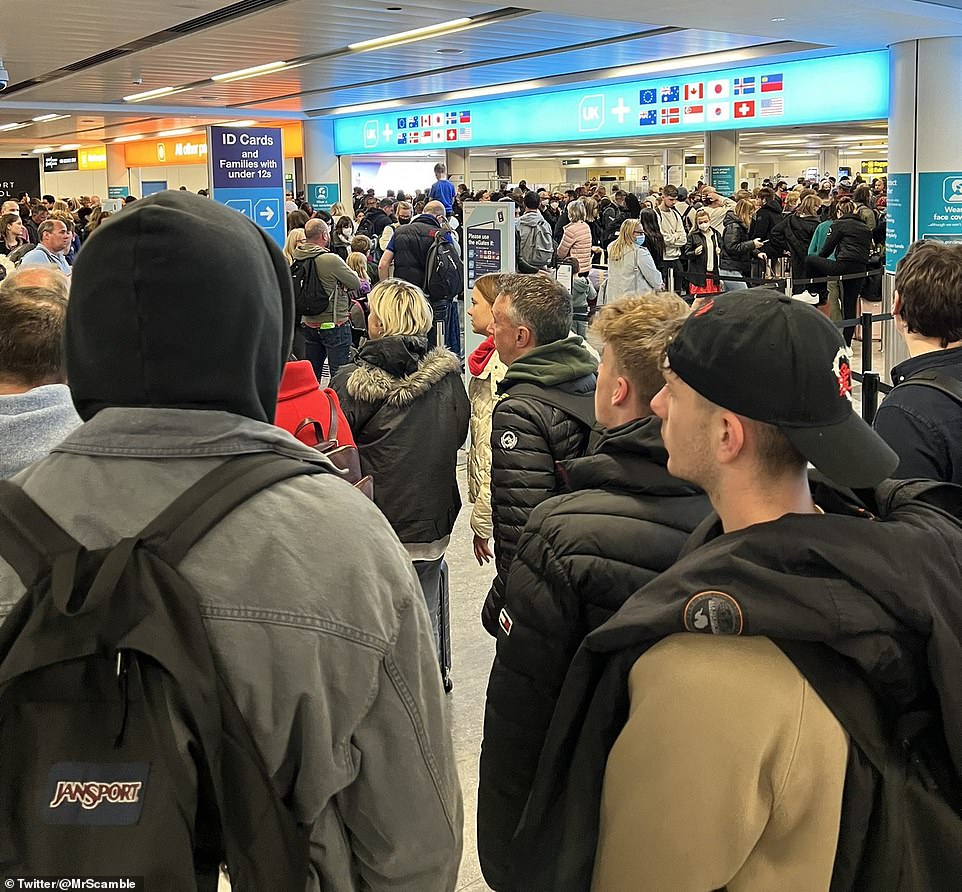 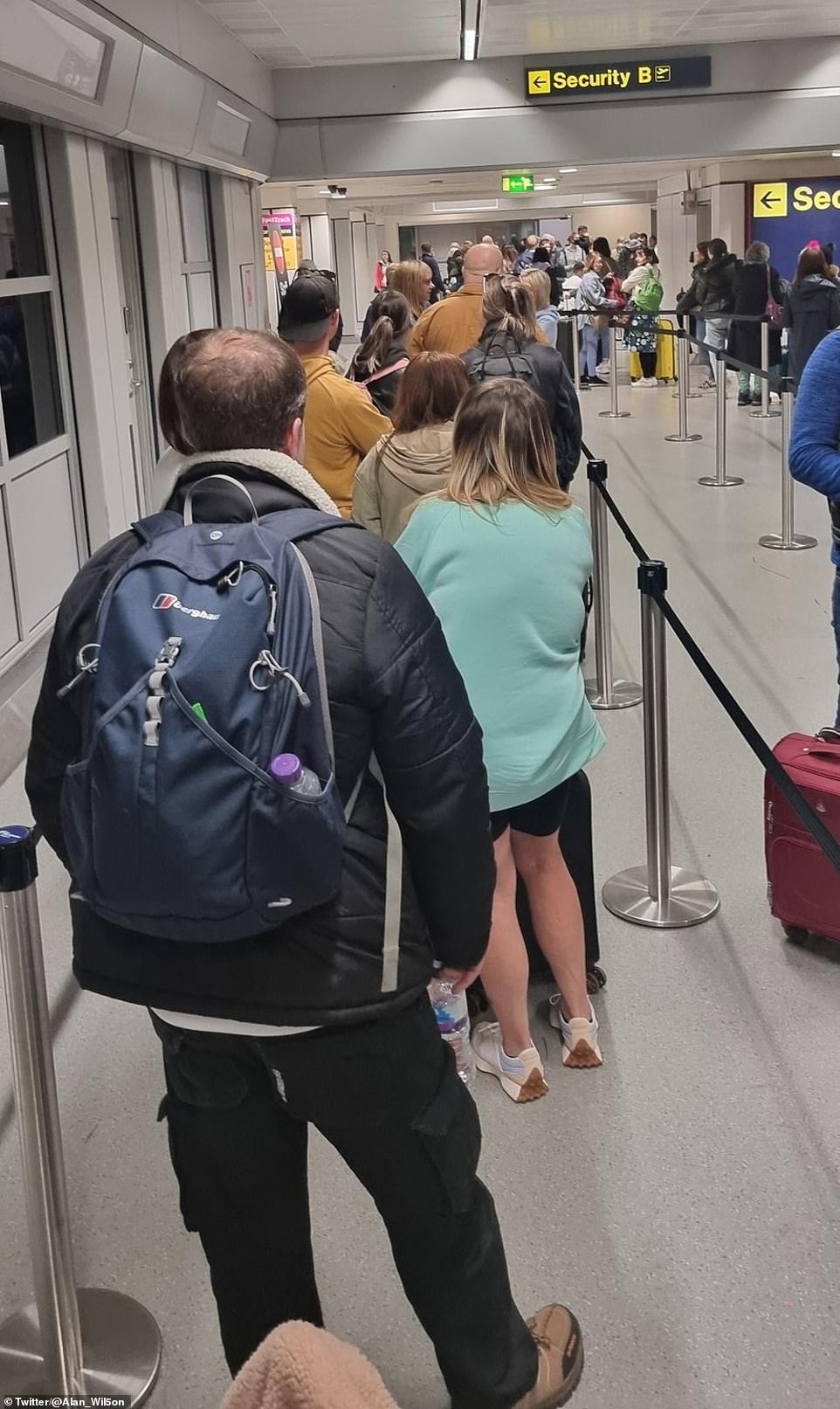 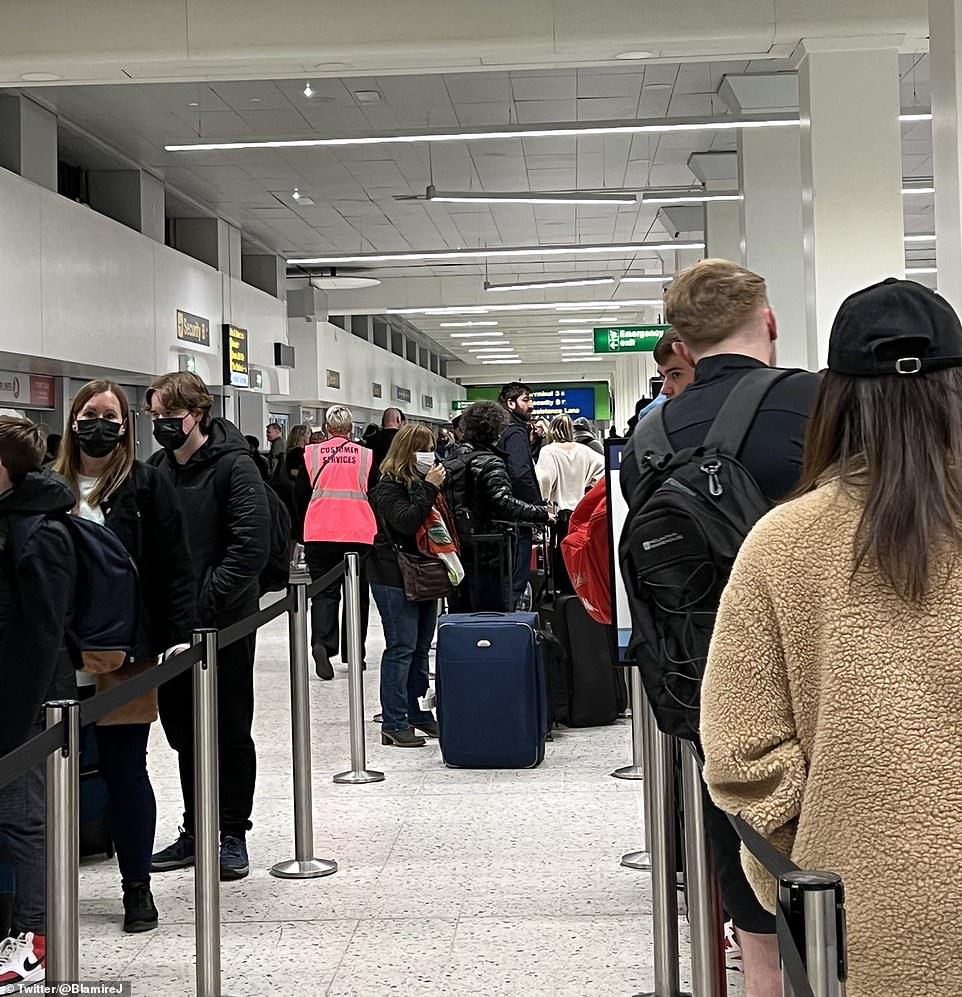 Chris Campbell said there were problems with the automatic gates at passport control at Gatwick.

He wrote online:  ‘1am. After a 4.5 hr delay with EasyJet we are welcomed home with passport control chaos at Gatwick Airport.

‘They’ve decided to to tinker with the e-gates and haven’t got enough manual staff.’

He said: ‘Sort it out Gatwick Airport. Been queuing to get through passport control.

‘Stuck in terminal haven’t even made it to the gates! It’s 2am!’ 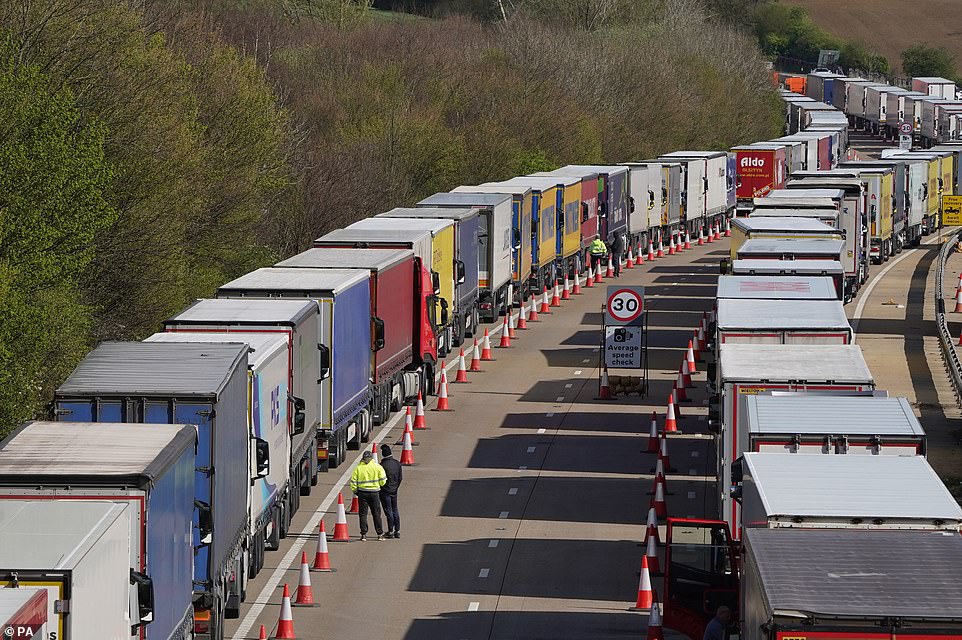 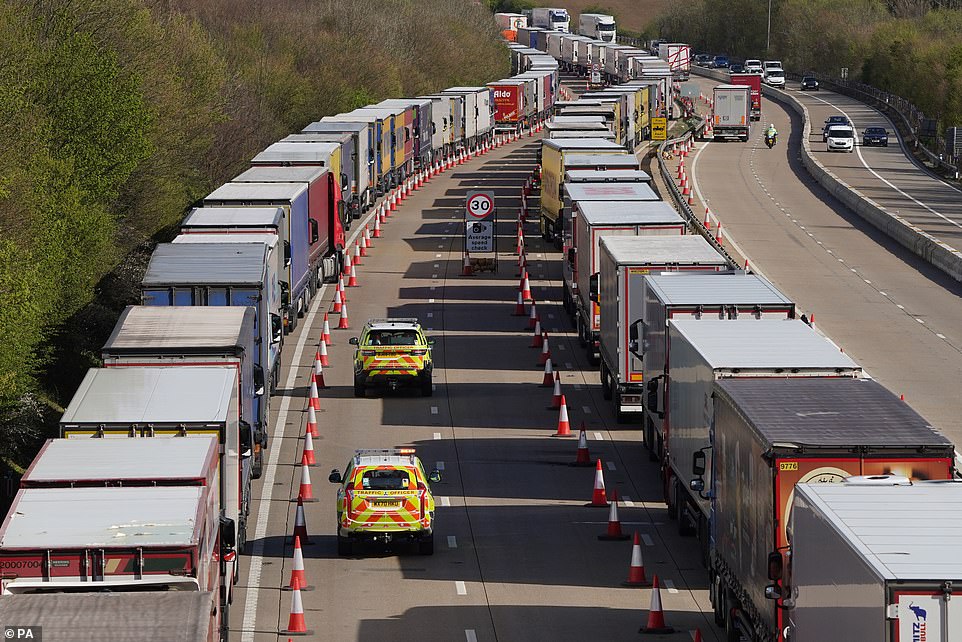 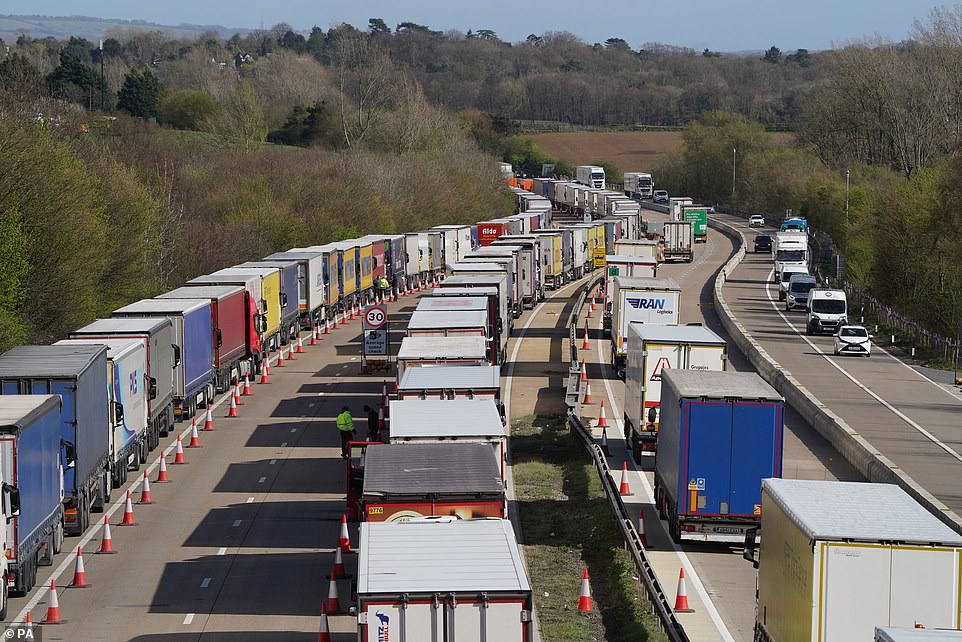 There are thought to be around 3,500 lorries stuck in road hell parked waiting to leave Kent

Meanwhile the boss of the Civil Aviation Authority fired a warning shot in two rare letters to airline and airport chiefs after several days of cancellations and bedlam inside departure halls.

Richard Moriarty said he was concerned by the service travellers have received in recent days and warned airlines to offer a more realistic number of flights based on staffing levels.

Some airlines are struggling to recruit fast enough to keep pace with surging passenger numbers amid the Easter holidays and after all Covid travel restrictions were dropped last month.

Mr Moriarty said it was the CAA’s ‘expectation’ airlines and airports work better together so that ‘disruption is kept to a minimum’. He added airlines should give travellers plenty of notice of cancellations and avoid doing it at the eleventh hour when they are already at the airport.

Mr Moriarty’s letter went on: ‘I would also like to take the opportunity to remind you of your legal obligations… to offer passengers a choice of refund or alternative travel arrangements at the earliest opportunity.’

Elsewhere drivers are also being warned to expect long delays next weekend as millions of people embark on an Easter getaway. 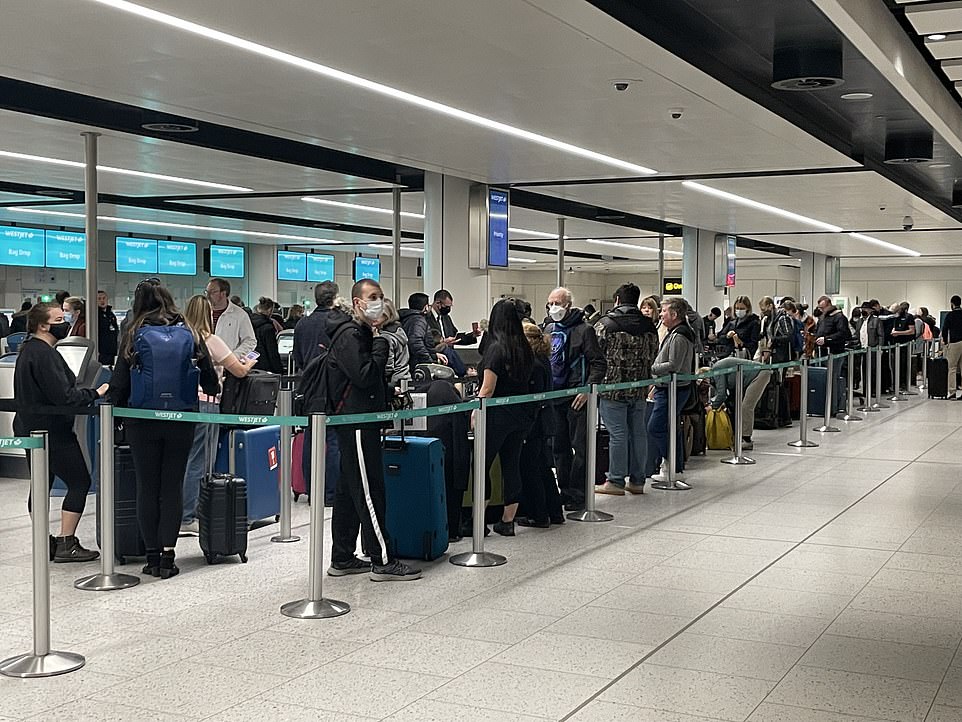 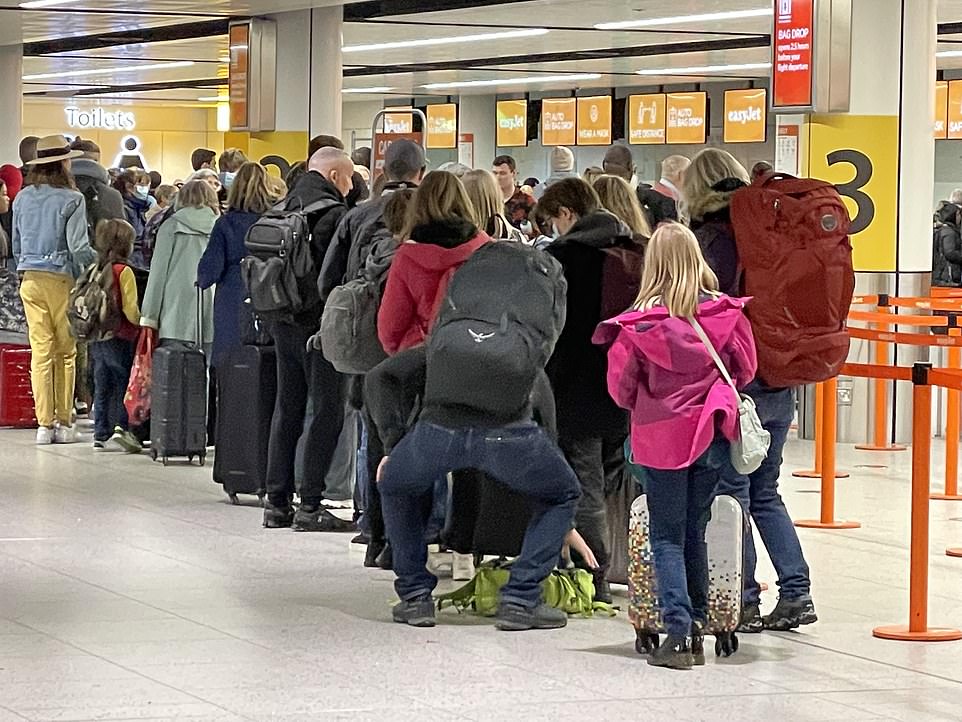 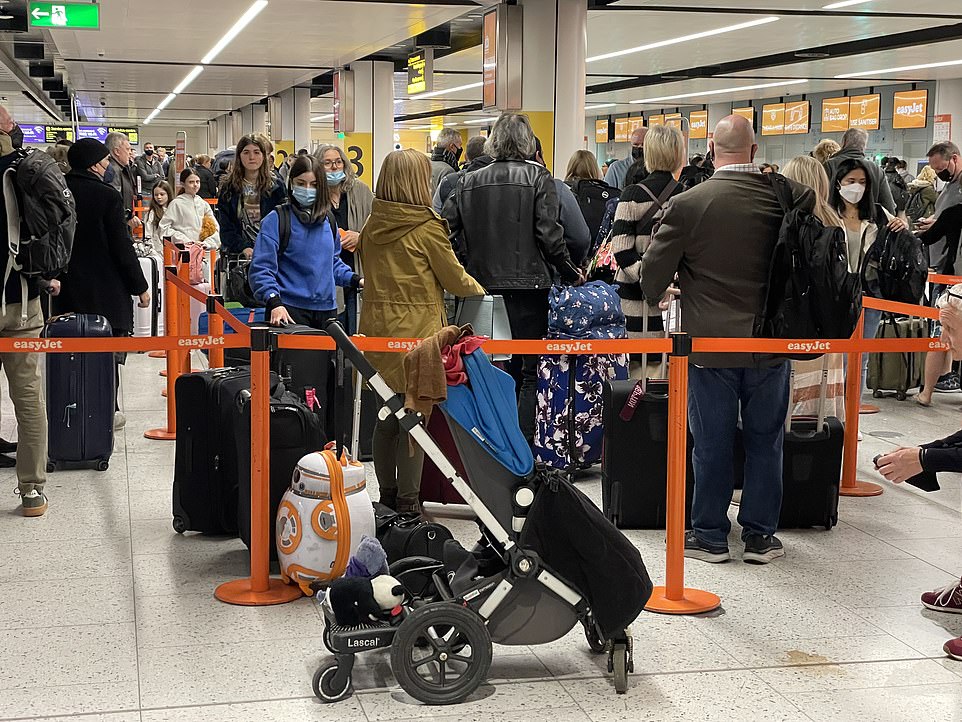 Not ferry good: how P&O crisis has left 3,500 trucks parked up on the roads of Kent

He said: ‘We’ve seen a lot of queues and the traffic management measures introduced which actually helps keep the town of Dover free-flowing, so local businesses and residents can carry out their normal duties. But these measures obviously mean that particularly lorry drivers are queued back onto the M20, outside the port through Kent, which is obviously not a great situation for them to be in but it is introduced to avoid any particular congestion in the town of Dover itself.

‘Well it’s not particularly enjoyable, obviously. There’s a lack of public facilities for toilets and shower facilities etc for these drivers, areas for them to eat etc. So it’s not ideal and I would heavily sympathise with them and all the enforcement agencies who are helping them out as well.’

‘If there is a major incident, the local resilience forum would get more resourcing and police, National Highways, the port etc would all be able to channel more resourcing through to ease the situation.’

‘What we’ve seen is that capacity taken out of the short straits. The current operators and Eurotunnel etc are speaking to their customers, trying to encourage certain people to travel later if they don’t have to at the moment. And it’s going to take some days to ease. But what we saw last weekend following a collision in the port of Dunkerque with one of the ferry operators, we saw that really spike over the weekend and that eased somewhat into this week. But now as we approach another busy East weekend, we’re seeing those queues extend again.’

‘It is a lot to do with the fact that P&O is currently out of service. That’s a big carrier, so you’re taking a lot of capacity out of the short straits, and that’s a fundamental issue really, with a few other factors – we’ve seen some Brexit issues, with IT systems disrupted this week. We’ve seen Easter holidays begin which always attracts a lot of people who are looking to go on holiday and post a lot of the Covid restrictions. This is one of the first holiday periods when effectively there’s no restrictions on travel, so we’re seeing a lot of people wanting – understandably – to get away, but they’ve been impacted as well as those freight drivers.’

The AA estimates that more than 27.6 million car journeys are planned between Good Friday and Easter Monday.

Some 13.6 million are expected on Good Friday alone, leading to fears of tailbacks on popular tourist routes.

‘With more than 27.6 million trips planned over the bank holiday weekend, we can expect significant congestion across the UK as people flock to coastal resorts and holiday homes.’

An AA survey of 14,000 drivers indicated that 53% will use their car to go on holiday in the UK this year.

About 20% will not go on holiday in 2022 due to financial pressures.

Latest Government figures show the average price of petrol at UK forecourts on Monday was 161.9p per litre, while diesel cost 176.0p per litre.

Rail passengers are being warned of disruption as Network Rail carries out 530 engineering projects costing a total of £83 million.

This includes a closure of the West Coast Main Line between London Euston and Milton Keynes between Good Friday and Easter Monday due to upgrades of the existing line and HS2 work.

Cross-Channel ferries will also be busy with many people heading off on foreign trips or families returning at the end of the two-week Easter school holidays.

Roads in Kent have been hit by long queues in recent days due to a shortage of ferries caused by the suspension of sailings by P&O Ferries after it sacked nearly 800 seafarers without notice.

The operator said it plans to resume operations on the Dover-Calais route next week pending regulatory approval.

Meanwhile, new figures show the UK’s tourism industry is beginning to recover after being hit hard by travel restrictions introduced during the coronavirus pandemic.

Trade association UKinbound, which represents more than 300 businesses dealing with tourists visiting the UK, said 39% of its members are reporting that international bookings and visitor numbers for between April and June are expected to be the same or higher than pre-pandemic.

The US market is recovering the strongest, with one in three businesses seeing growth in that area.

But some 61% of firms expect demand to be lower, indicating how much of the sector is continuing to struggle.

UKinbound chief executive Joss Croft said: ‘It’s fantastic to see international travellers returning to the UK and we’re delighted to see the strongest growth from our number one market, the USA.

‘The ending of all UK travel restrictions has given international consumers the confidence to begin travelling here again.

‘Compared with 2020 and 2021, business is booming, but we’re significantly lagging behind 2019 prosperity and our competitors.’