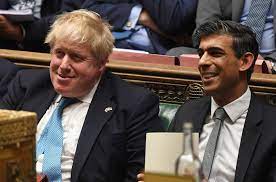 Boris Johnson has agreed to allow an inquiry into Rishi Sunak’s tax declarations after the chancellor became embroiled in controversy over his and his wife’s financial affairs.

The prime minister accepted a request from Mr Sunak for the independent adviser on ministerial interests, Lord Geidt, to investigate whether his various declarations of interest had been properly stated, Number 10 said.

Mr Johnson’s deputy spokesperson said the prime minister has full confidence in his chancellor, who insists he’s done nothing wrong and claims an inquiry will vindicate him.

Asked if Lord Geidt had begun his investigation into the chancellor, the spokeswoman said: “I’m not aware of whether Lord Geidt himself has begun his work.

“But I can confirm that the prime minister has agreed to the request from the chancellor for Lord Geidt to undertake this work.”

Senior Cabinet minister George Eustice said the chancellor was “right” to refer himself for a review after controversy over his tax affairs engulfed Downing Street.

Mr Sunak admitted on Friday that he’d held a US green card for more than a year and a half into his time as chancellor, meaning for that time he’d declared himself a permanent US resident and would have been paying taxes on his international earnings to the country.

Hours later it was reported by the Independent that Mr Sunak was listed as a beneficiary of tax haven trusts in the British Virgin Islands and Cayman Islands, which had been set up to manage business and tax affairs of his wife Akshata Murty.

What is non-domiciled status? Why the row over Sunak’s wife’s tax affairs?

Ms Murty also found herself embroiled in controversy over her own tax affairs last week after it was revealed she was registered as living outside the UK – despite residing in 11 Downing Street with her husband – meaning she was exempt from paying UK tax on her international earnings.

The multi-millionaire agreed to give up her non-domicile status in the UK, which tax experts said could have saved her tens of millions, after the revelation landed her husband in hot water.

There is no suggestion either have broken the law, but critics say it seems inappropriate for the man who sets taxes in the UK – or his family members – to be involved in schemes that could see them pay less UK tax.

Following days of attacks over his wife’s tax affairs, which were followed by questions over his own, the chancellor released a statement saying he wanted his ministerial declarations to be investigated by the Independent Advisor on Ministers’ Interests.

Environment Secretary George Eustice told ITV News he believed that was the right thing for Mr Sunak to have done, but said his colleague had followed all the rules.

“I think he has [done the right thing] because there’s obviously been some controversy around this.

“The chancellor has been clear throughout that he’s declared everything in the usual way, in the right way, but given the coverage there’s been around this over the weekend, it’s right that he should now ask Lord Geidt to take a look at this.”

He added: “I don’t think there’s a problem but it’s also right that this should be looked at by Lord Geidt, given the controversy that’s surrounded it.”

In his statement Mr Sunak insisted he has “always followed the rules” and said he hopes a review will “provide further clarity”.

“I am confident that such a review of my declarations will find all relevant information was appropriately declared,” Mr Sunak wrote.

His wife, Ms Murty, said she would be giving up her non-dom status and paying more UK tax “because I want to, not because the rules require me to”.

“I understand and appreciate the British sense of fairness and I do not wish my tax status to be a distraction for my husband or to affect my family,” Ms Murty said in a statement on Friday.

“For this reason, I will no longer be claiming the remittance basis for tax. This means I will now pay UK tax on an arising basis on all my worldwide income, including dividends and capital gains, wherever in the world that income arises.”