We have hours left – help us’, says Mariupol marine 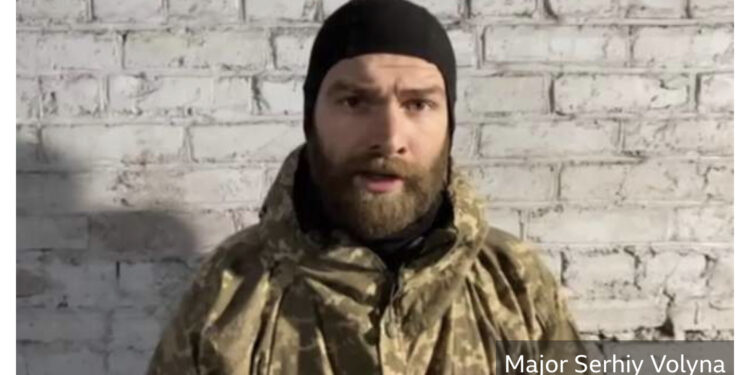 A marine commander in the last Ukrainian stronghold in the besieged city of Mariupol issued a video message in the early hours of Wednesday morning saying his men might have only hours left.

In a video sent to the BBC and other media, Major Serhiy Volyna said his troops would not surrender, but he pleaded for international assistance for the 500 wounded soldiers and hundreds of women and children he said were hiding with them at a steel plant in the city.

“This is our last address to the world. It may be our last one ever. It is possible that we have just days or hours left,” Major Volyna said.

“We call on world leaders to help us,” he added. “We urge them to organise an extraction to take us to a third country.”

The Azovstal Iron and Steel Works – a massive, four square-mile plant – has become the last redoubt of the Ukrainian resistance in Mariupol.

“The units of the enemy exceed ours dozens of times, they prevail in the air, in artillery, in ground troops, and in machines and tanks,” said Major Volyna, who is a commander in the Azov regiment, part of Ukraine’s national guard.

He declined to say how many Ukrainian troops were left in the plant but he said they had “good fighting spirit”. The situation for the wounded was “very bad” however. “They are in a basement, they are just rotting there,” he said.

Mariupol has been a strategic goal for Russia since its forces invaded Ukraine in February. The Ukrainian president, Voloymyr Zelensky, told the BBC last week he believed up to 20,000 people may have been killed in Mariupol by the Russian bombardment of the city, and unknown numbers taken into Russian territory.