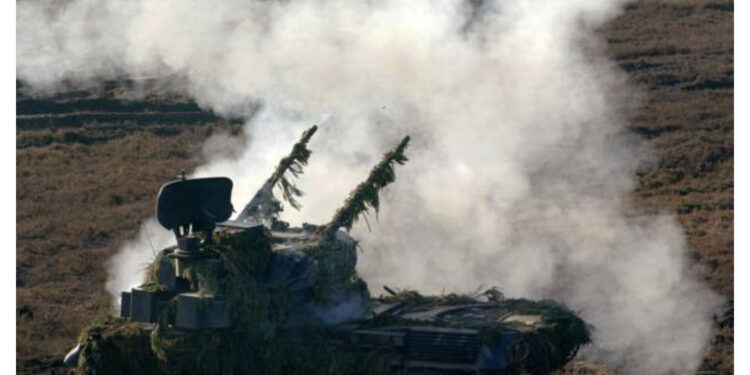 A series of blasts sounded across in the Russian city of Belgorod near the Ukrainian border early Wednesday morning as authorities extinguished a fire at an ammunition depot.

Regional governor Vyacheslav Gladkov said he woke “to a loud sound like an explosion” at about 3:35am in an update posted to Telegram.

“So far, not a single duty service of the city and the region has found the cause of this sound,” he added.

The explosions were said to have come from near the village of Staraya Nelidovka which lies about 40km outside the Ukrainian border.

“According to preliminary information, an ammunition depot is on fire. There is no destruction of residential buildings, houses. There were no casualties among the civilian population,” Gladkov said.

The Belgorod province borders Ukraine’s Luhansk, Sumy and Kharkiv regions, all of which have seen heavy fighting since Russia invaded Ukraine two months ago.

An estimated 1,000 Ukrainian forces – as well as hundreds of civilians – are thought to be located at the Azovstal steelworks, a sprawling complex covering about four square miles with a network of passages in its basement. Metinvest, which owns the steel mill, says that the bunkers below ground were used as shelters in 2014 during a previous attempt on the city by Russian-backed separatists and were stocked with enough food and water to last 4,000 people three weeks.

In those circumstances, says Peter Beaumont, an experienced foreign correspondent for the Guardian and Observer, there may have been some misunderstanding of the reasons for Russia’s reluctance to go in on the ground even as it continues to shell the site. “Perhaps some people have slightly got the narrative wrong when the Kremlin said we’re going to seal it off, as if this was a Russian defeat.”

Peter points out that the presence at the site of the Azov battalion, a unit linked to the far right with a significant neo-Nazi contingent, means that “in propaganda terms, pictures of these guys stumbling out with their hands up would be a much bigger win than potentially losing hundreds of soldiers by trying to raise a Russian flag over the steelworks.”