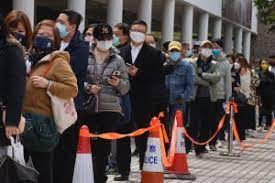 Restaurants across Beijing will temporarily ban dining-in and residents will need clear Covid tests to visit public spaces, officials said on Saturday, in a major ramp-up of virus controls at the start of the Labour Day holiday.

The five-day break is typically one of China’s busiest travel periods, but the country’s worst Covid resurgence since early in the pandemic is expected to keep people at home.

Faced with the highly transmissible Omicron variant, Chinese officials have doubled down on their zero-Covid policy, quashing virus clusters through mass testing and lockdowns.

Despite mounting economic costs and public frustration, the capital city announced it would further restrict access to public spaces during and after the holiday period.

From 1 to 4 May, the city’s eateries will halt dining-in, and only allow deliveries, local commerce official Ding Jianhua told a press briefing on Saturday.

Authorities also said they had so far prepared 4,000 makeshift hospital beds – typically used for patients with light or no Covid symptoms – and are speeding up the set-up of larger quarantine sites.

A negative Covid test taken within the past week will also be needed starting on 5 May to enter “all kinds of public areas and to take public transport”, according to a notice on the city’s official WeChat page.

For activities such as sporting events and group travel, participants will also need to show a negative Covid test taken within 48 hours, along with proof of full vaccination, according to the new rules.

China reported more than 10,700 domestic Covid cases on Saturday, with most in the country’s economic engine, Shanghai.

The eastern metropolis has been sealed off for about a month after becoming the centre of the latest outbreak.

Cases are trending downwards, yet frustration and anger is boiling in the city of 25 million where many have been ordered to stay at home for several weeks.

Shanghai officials said on Saturday that its new cases had all been found among quarantined or restricted groups – signalling that community infections could be slowing.

They added that hundreds of companies on a “whitelist” hade resumed work, with about 1,000 firms also allowed to restart operations, state media said.

In Beijing, cases nudged up to 54, according to the National Health Commission.

As the long holiday started, consumers in the capital were asked to show proof of negative Covid tests – from within 48 hours – to enter public areas such as malls, shops and scenic spots.