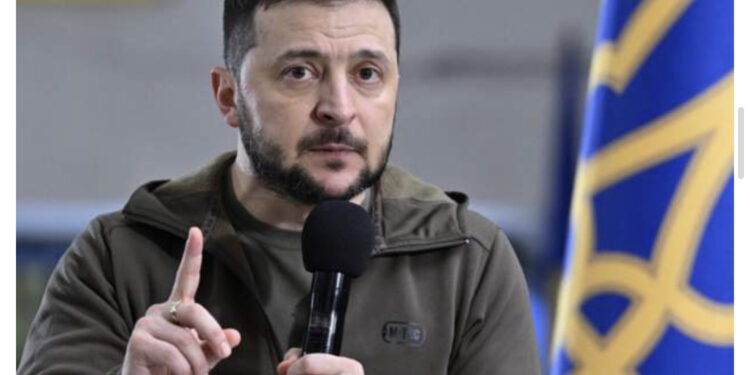 The Russian army bombed a grain warehouse in Ukraine and tightened its blockade on Black Sea ports, sparking fears of a new global food crisis.

Mr Frick said: ‘None of the grain can be used right now. It is just sitting there.’

It followed news that Putin’s forces looted £4million worth of Ukrainian tractors and took them 700 miles to Chechnya before realising they were locked. 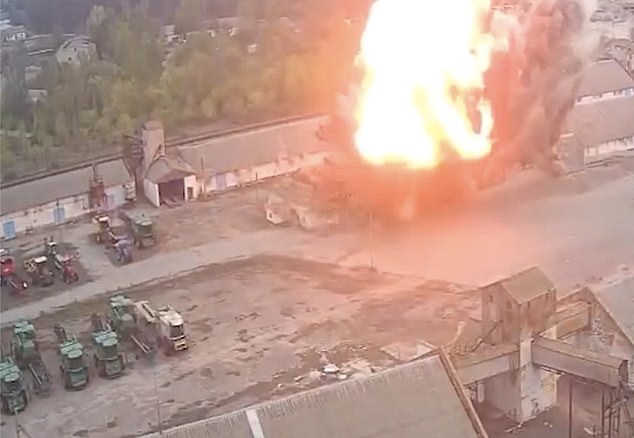 The Dnipropetrovsk grain warehouse was destroyed by the Russian missile, staff said

Zelensky said: ‘They targeted the warehouses of agricultural enterprises. The grain warehouse was destroyed.

‘The warehouse with fertilizers was also shelled.’

The president urged world leaders to prepare for a new food crisis prompted by Russia’s food blockade on Ukraine.

He told 60 Minutes: ‘Russia does not let ships come in or go out, it is controlling the Black Sea. 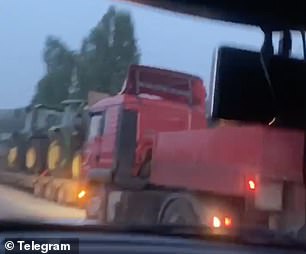 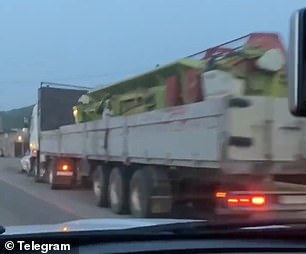 Tractors (left) and combine harvesters (right) worth £4million in total were stolen – but locked. The tractors were taken by Russian vehicles with the military ‘Z’ painted in white

‘Ukraine could lose tens of millions of tonnes of grain due to Russia’s blockade of its Black Sea ports.’

Egypt and Tunisia import 80 per cent of their grain from Ukraine and Russia, while Lebanon purchases 60 per cent of its supplies from the two countries.

Russian soldiers appear to be planning to extract more supplies from their own land with stolen Ukrainian equipment. But it has not all gone to plan. 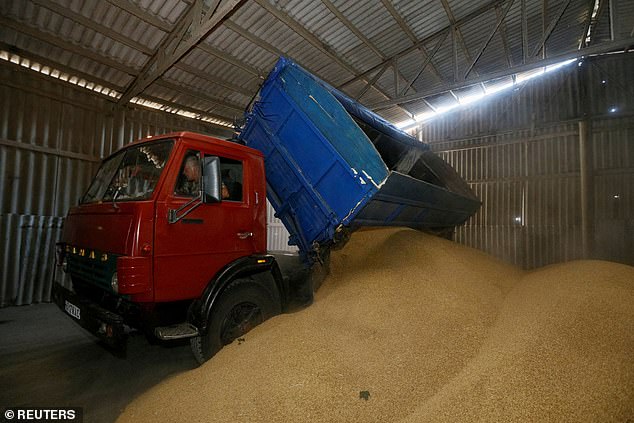 Nicknamed ‘the breadbasket of Europe’, Ukraine’s grain supplies are a crucial food source to central and western Europe, the Middle East and Africa. Pictured: a Ukraine grain shed in 2016

A fleet of 27 Ukrainian farm vehicles including combine harvesters and seeders were stolen from a tractor dealer in occupied Melitopol over a several week period.

Their combined value totalled £4million, with the harvesters going for £240,00 each.

But after loading the vehicles onto trucks and carrying them 700 miles to Chechnya, the Russian army realised they couldn’t even use them.

A source close to the dealer told CNN: ‘When the invaders drove the stolen harvesters to Chechnya, they realized that they could not even turn them on, because the harvesters were locked remotely.’

During his speech to the Irish parliament , Zelensky said Putin has targeted Ukraine’s food supply in an effort to starve its people.

‘For them, hunger is a weapon against us ordinary people as an instrument of domination’, Zelensky added, in comments which may have been intended to reference Ireland’s struggle with starvation in the 1840s.

‘They are blocking humanitarian access to the half-million people in Mariupol who can no longer melt snow for water’, he continued.

He also told Italy’s Chamber of Deputies in March that exports of grain and food products will be disrupted as Russia’s invasion continues.

‘The worst will be hunger, which is nearing for many countries . . . we do not know what harvest we will have and whether we will be able to export it. Prices are already surging.’

Putin is suffering from Parkinson’s and dementia- Boris Karpichkov