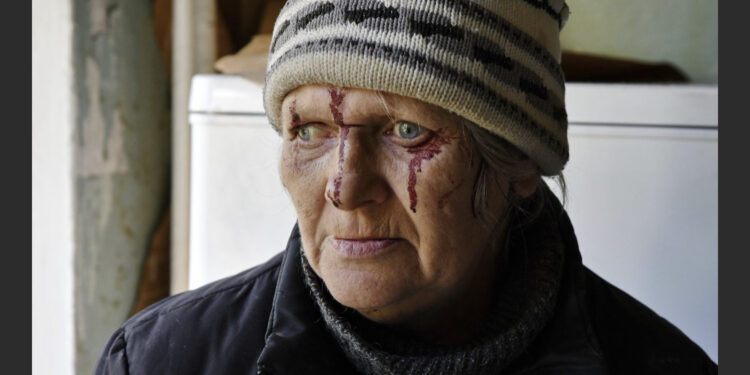 Russia planned the forcible deportation of up to two million Ukrainians before launching its invasion, according to top-level Kremlin documents obtained by the Daily Mail.

The papers disclose how 1,310 transit centres were set up to handle captured Ukrainians in a sinister move that has been compared to mass deportations of the Soviet Union’s darkest days.

As part of this chilling policy, about 1.2million Ukrainians have already been taken to Russia – some ferried more than 5,000 miles to remote villages in Siberia, close to the North Korean border or even to a Russian island in the Pacific near Japan.

The transit facilities and forced evacuations into far-flung parts of Russia are linked to a ruthless system of so-called ‘filtration camps’ set up on occupied Ukrainian terrain to seize those deemed enemies of their state and funnel others into the country. 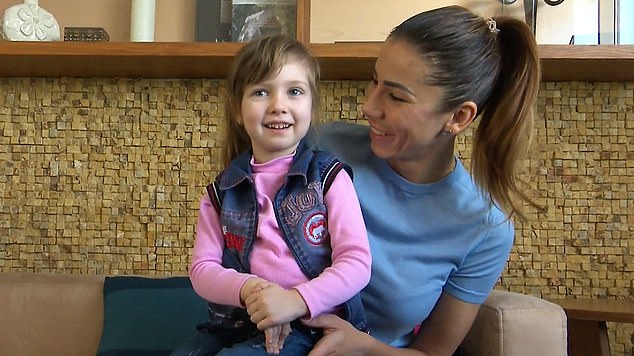 Safety: Four-year-old Alisa in Zaporizhzhia after she became separated from her mum in a filtration camp. The papers disclose how 1,310 transit centres were set up to handle captured Ukrainians in a sinister move that has been compared to mass deportations of the Soviet Union’s darkest days

Ukrainian officials have revealed that thousands of men rounded up by Vladimir Putin’s troops are also being used as forced labour. They are ordered to search destroyed Ukrainian buildings for unexploded munitions and to get rid of evidence of mass slaughter.

‘They send them like human shields to walk around buildings that are not fully destroyed and might contain explosives,’ said Liudmyla Denisova, Ukraine’s Human Rights Ombudsman.

Forced labourers are also ordered to collect, burn or bury the bodies of fellow Ukrainians – such as those among the 600 killed in bombing while hiding in the basement of Mariupol Theatre two months ago.

‘This is just horrible,’ said Denisova. ‘Just imagine: they must remove the bodies, pile them up or put them in bags, then take them somewhere to be dumped in mass graves. It is exactly like Hitler’s atrocities.’ 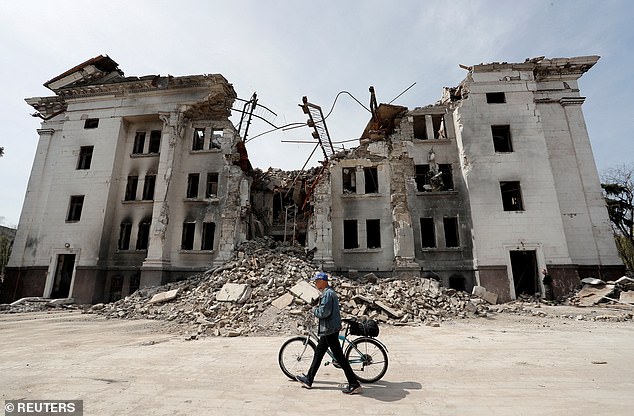 In March, the Daily Mail detailed the first eye-witness account of Putin’s sinister system of forced evacuations and the use of filtration camps – a tactic pioneered by Stalin. Now our investigations can reveal that:

The horrors of Putin’s filtration policies were highlighted last week when a four-year-old girl called Alisa arrived in Zaporizhzhia, a city in south Ukraine, after her evacuation from Mariupol.

This little girl – who was filmed pleading for help as she sheltered in a bunker beneath the city’s besieged Azovstal steel plant – had endured a 29-hour bus journey with just a backpack containing some clothes and a note from her mother Viktoria Obdina asking relatives to care for her child.

Viktoria disappeared after the pair were separated in a key filtration camp at Bezymianny, 20 miles from Mariupol. Her ‘crime’ was to be a doctor tending to Ukrainian fighters wounded in the battle for Azovstal.

Russian forces had interrogated them and looked for any links they had with the Ukrainian government – such as pictures on phones, patriotic tattoos or any signs lingering on their body of weapon use.

One of Alisa’s fellow bus passengers said: ‘They checked us, they undressed us, they looked at us.’

Women escaping the hell of Mariupol have told also of being forced to strip naked and being questioned alone for several hours by heavily-armed men demanding access to all data on their phones.

For some, the process takes just a few hours but others are held for weeks. One man said he saw a woman led away for possessing a pro-Ukraine poster, then was warned the only way out was to join Moscow’s army and send his family to Russia. ‘People have told us they have been beaten during this filtration procedure,‘ said Oleksandra Matviychuk, head of Kyiv’s Centre for Civil Liberties. ‘They told us they heard people are being killed but it needs further investigation.’

Filtration camps were used after the Second World War when Stalin’s goons screened Soviet prisoners of war and citizens who had been held by the Nazis, sending almost 300,000 into gulags for supposed ideological impurities.

The policy was revived between 1994 and 2003 during Moscow’s two wars against Muslim separatists in Chechnya, leading to global condemnation of ‘unspeakable’ abuses such as mass internment, rape and torture. Many detainees were never seen again.

Tetiana Lomakina, the Ukrainian president’s adviser on humanitarian corridors, said it was becoming impossible to move around occupied areas without passing through the filtration process which is being ‘jointly conducted by Russian military and intelligence’.

She said: ‘The main goal is to find and exterminate all Ukrainians who have connections with the armed forces of Ukraine, officials or local authorities.

‘But also, during the questioning, they try to scare people, to make sure they do not go to territories controlled by Ukraine.’

Documents passed to the Mail by Ukrainian officials not only reveal details of the Kremlin’s strategy for refugees, with officials across the country identifying locations to hold them, but also how it was planned before the invasion. Both Kyiv and Moscow say 1.2million people have been taken over the border to Russia.

It lists 152 ‘ready to receive’ from 6am on February 21 – three days before full invasion – and identifies dates when others will become operational. A second document dated from April 29 lists 1,310 ‘facilities’ as available to hold Ukrainians – showing that 33,474 people, including 11,637 children, were held in 496 different centres. Human Rights chief Denisova said the documents prove the policy was planned at the highest level.

She fears Putin plans to take two million Ukrainians – almost five per cent of the population. Forced deportation was practised by both Tsarist and Communist rulers, who transported vast numbers of people from the Baltic States, Caucasus and Crimea to underpopulated areas such as Siberia and the steppes of Kazakhstan.

‘This is routine for Russian history,’ said Mikhail Matveev, a human rights activist who helps Ukrainians to escape. ‘They deport populations to silence them and then replace them by moving in loyal people.’

Many of those fleeing Putin’s assault are desperate for sanctuary and suffering shock. Typical is Natalia, 44, who fled Mariupol with her husband and elderly mother after their apartment was hit by a missile last month.

She says: ‘We knew we had to flee, otherwise we would die. But I was not thinking where and how would we go. We just needed to get out. I was like a zombie.’

She was taken to Opukhliki, a Russian village 800 miles north of Mariupol. ‘We had no money, no belongings, nothing.

‘We were offered legal status and to stay in Russia. But we declined. It’s very beautiful but all I wanted was to be at home.’

Natalia was fortunate: she escaped Russia with the help of a sister living in Israel and human rights activists who raised funds.

It should be added that many Ukrainian refugees are greeted warmly by local volunteers offering help with clothing, food and shelter. Indeed, Putin’s propaganda machine exploits such acts of humanity and kindness to show his nation welcomes those escaping the conflict which was caused, in his twisted narrative, by Nato aggression and neo-Nazi politicians in Kyiv.

Some Ukrainians find themselves in incrediblly remote parts of Russia – such as 308 refugees from Mariupol who were taken on a ten-day train journey to Vrangel, a coastal settlement close to North Korea more than 5,500 miles away.

Oleg, 38, a construction worker, was transported there with his wife Anna, 32, after volunteers from United Russia – Putin’s political party – distributed food aid in Mariupol and offered them sanctuary. Having passed through filtration and been warned they could not leave Russia, the couple were told they were going to the city of Vladivostok – and were then dismayed to end up in a small seaside town 118 miles further east.

‘I did not want to stay in Russia because they killed our city,’ said Oleg. ‘Who would want to stay? Imagine you are at war with a country – and it comes into your city, destroys your home and then says: stay with us, you can even work for us.’

Oleg was helped to escape – flying to Moscow and then travelling to Latvia – by an informal Russian network of activists and fundraisers. One priest in St Petersburg estimated that ten per cent of refugees wanted to leave their homes, that a similar number planned to stay but that ‘most simply do not know what to do’. He said: ‘Many had never left Mariupol before. They say, ‘We don’t know anything, never been anywhere”.’ 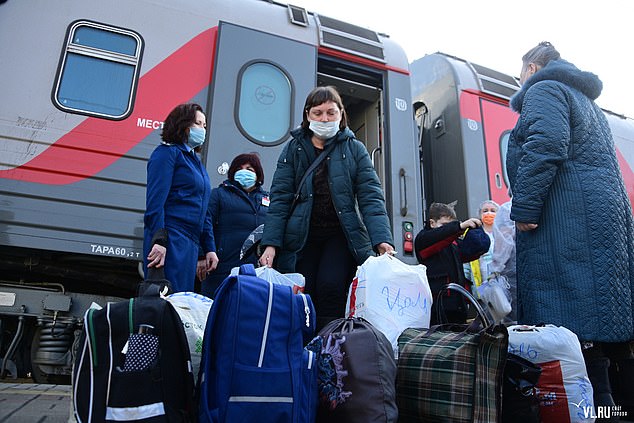 The transit facilities and forced evacuations into far-flung parts of Russia are linked to a ruthless system of so-called ‘filtration camps’ set up on occupied Ukrainian terrain to seize those deemed enemies of their state and funnel others into the country. People are pictured arriving into Russia on trains

An activist who visited a transit camp holding 56 Ukrainians near Ryazan, in central Russia, said he saw senior officials trying to persuade them to accept a legal status that would prevent them from leaving the province with promises of citizenship.

He also heard officials falsely claim that anyone leaving Ukraine without permission for longer than 15 days faced a lengthy prison sentence if they returned home.

Victoria Ivleva, a Russian journalist, has described what she calls ‘fragile’ refugees being snared by Putin, saying: ‘This may be saving their lives but it is a trap.’

Meanwhile, Ukrainian officials are alarmed about the welfare of anyone who fails the filtration process, as stories emerge of distressed citizens forced to leave behind family members as they flee the conflict zone.

One woman described how a man in his early 20s was taken away for questioning as he fled Mariupol but never returned. ‘His mother is desperate, having not heard from him for five weeks,’ she said.

Petro Andriushchenko, adviser to Mariupol’s mayor, said data indicates about one in ten people fail filtration. He says Russians are sending anyone believed to be a threat to them – such as activists, journalists, family members of Ukrainians serving in the military and former law enforcement officials – to the occupied Donetsk region.

He believes many are detained in two prisons that are renowned for using torture, including electric shocks and mock executions. There is also video footage shot covertly by men held for several weeks in a school.

Kyiv lacks firm information about those who have disappeared into areas such as Donetsk, which are controlled by Putin’s stooges.

But one source pointed to the case of an official released after 30 days imprisoned in Penal Colony Number 52 in Olenivka, near Donetsk. Soldiers had captured the man in early March from a village near Mariupol and – after finding an ‘incriminating’ message on his phone – bound his eyes with tape, put a hood over his head and tortured him for five hours with beatings and electric shocks.

Later he was put in a six-bed cell holding 25 men in the Olenvika prison, which was designed for 750 inmates but where it is believed about 3,000 are crammed.

Other prisoners claim they faced threats that their hands would be chopped off with chainsaws. It is believed many more Ukrainians are being held at Isolation, a former art gallery in Donetsk converted into a torture camp.

There are also concerns that the huge quantities of data obtained by Putin’s forces from fingerprints and phones will be fed into repressive surveillance systems to increase Kremlin control.

‘There is no way of knowing the long-term consequence of the Russian state having all this information,’ said Belkis Wille, a senior conflict researcher at Human Rights Watch. ‘Russia is not yet at the level of China, but it has a robust database of biometric data and has been using facial recognition technology to catch criminals.’ Just one more twist in the horror story engulfing Ukraine.