in Entertainment, World News
Reading Time: 4 mins read
0 0
A A
0 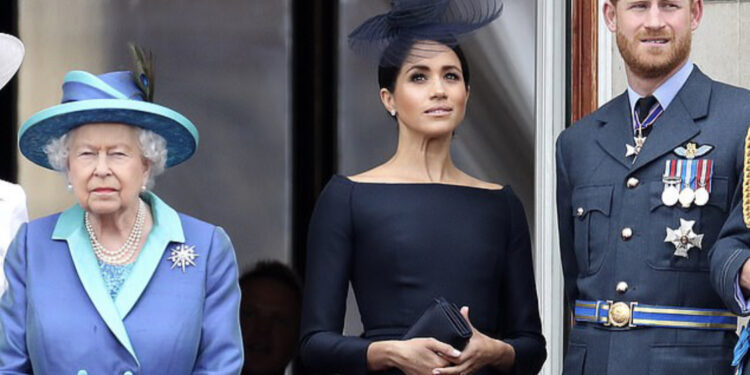 Prince Harry and Meghan Markle never wanted to appear on the balcony of Buckingham Palace with the Queen for her Platinum Jubilee celebrations, a friend of the pair has claimed.

Omid Scobie, who penned a biography on the Duke and Duchess of Sussex, says the Harry had discussed the possibility of not being present for Trooping the Colour at the Mall in London on June 2 with Her Majesty.

He said despite this the couple are ‘very keen’ to be part of the arrangements in the coming months, including the Thanksgiving celebrations at St Paul’s Cathedral.

This comes after a sensational statement from the Queen last week stating the pair – along with Prince Andrew – would not be invited onto the balcony for Trooping the Colour, the spectacular start of her long weekend of commemorations.

Following that the Sussexes released a statement that they would still fly from California with their two children – Archie, three, and Lilibet, 11 months – in June.

Writing in Yahoo! News, Scobie said the news that the pair would not be appearing on the balcony with Her Majesty should not come as a surprise. 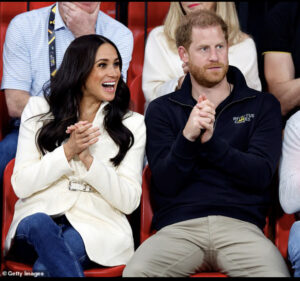 ‘As is often the case, the reality is much less severe when you hear that Prince Harry had already spoken with his grandmother about the possibility of not attending Trooping the Colour long before last week’s announcements,’ he wrote.

He said the pair were ‘very keen’ to be part of the Jubilee celebrations, but that ‘both sides’ thought it would be more appropriate not to have the Sussexes on the balcony.’ 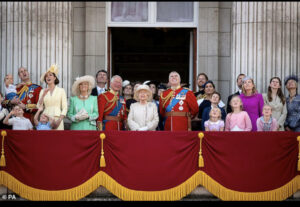 He added that despite not wanting to appear on the balcony, Harry and Meghan did want to attend the National Service of Thanksgiving at St Paul’s Cathedral.

And last week there were suggestions that despite not appearing for Trooping the Colour, the pair could make an appearance as part of a second balcony appearance. 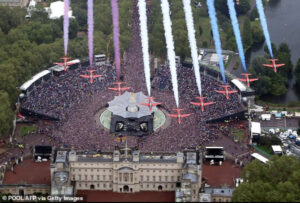 The Queen’s decision is unlikely to fall comfortably with all Royal Family members – particularly Prince William – who have been left deeply hurt and angered by Harry’s behaviour. But sources said there was little doubt that all would put their feelings to one side for the sake of the monarch.

‘At the end of the day it is about celebrating the historic achievement of a truly remarkable woman. No one would want to disrespect the Queen by continuing hostilities in public,’ said one.

Another said: ‘Despite what has happened in recent years and what may be yet to come given that Harry’s memoirs have yet to come out, family members will accept the Queen’s olive branch in the spirit it was extended. The body language will be fascinating, mind you.’

There are those who will view their keenness to be seen alongside the rest of the Royal Family – who just last year they accused of racism and abandoning them, both emotionally and financially – as part of an attempt to emphasise their links with the monarchy and strengthen their bankability.

This comes after it was revealed the first major project in their multi-million-dollar deal with Netflix has been scrapped by the streaming giant.

However a palace source said: ‘They are much-loved members of the family and [the Queen said] they would be invited to family events. We’ve always made that clear.’

Following Trooping the Colour, 18 family members will be on the balcony: The Queen; Charles and Camilla; William and Kate with George, Charlotte and Louis; Edward and Sophie and their children Louise and James; Princess Anne and Vice Admiral Sir Tim Laurence; the Duke and Duchess of Gloucester; the Duke of Kent and Princess Alexandra.

But Prince Andrew’s daughters, Beatrice and Eugenie, will not. Andrew has stepped down from public duties and only weeks ago paid millions out of court to settle a civil sexual assault case.

But it is understood the Queen is making a special effort to include his daughters – of whom she is extremely fond – in every other aspect of the jubilee celebrations.

It will be the first time the Windsors have appeared on the balcony since the Queen’s official birthday parade in 2019.

It comes as a number of royal experts warned that Harry and Meghan’s mere presence back in the UK threatens to overshadow the festivities.

Tom Bower told MailOnline: ‘They have been forced to accept a downgraded role – grouped with all the other VIPs – but are clearly desperate not to be excluded. If the Palace is not remarkably careful, the Sussexes will milk the celebrations for their own benefit.

‘Hopefully, the Sussexes will be kept firmly in check to avoid their selfish interests dominating the celebration of the Queen’s awe-inspiring service to Britain.’

Royal author Angela Levin said the Queen had made a ‘great decision’ to restrict the balcony to working royals, adding: ‘It will have such a different positive atmosphere if there are working royals who support Her Majesty.’

On the Sussexes’ decision to attend other events she said: ‘The focus will be on them and how they behave, which the Jubilee shouldn’t be about’.

Richard Fitzwilliams, another commentator, added: ‘There was [a danger] in the run up to it if this hadn’t been settled. I expect there will be an element of this in the US coverage.

However though there will still be a lot of speculation about what they will attend and what they will do, this is about one person. It is the Queen’s wish that they attend.

‘Although when they planned to do the Oprah interview they didn’t know Prince Philip would be ill, they nonetheless went ahead. That won’t be forgotten.

‘But the Queen wants the family to put on a united front. A huge amount has gone on behind the scenes to achieve this.’

However though there will still be a lot of speculation about what they will attend and what they will do, this is about one person. It is the Queen’s wish that they attend.

‘Although when they planned to do the Oprah interview they didn’t know Prince Philip would be ill, they nonetheless went ahead. That won’t be forgotten.

‘But the Queen wants the family to put on a united front. A huge amount has gone on behind the scenes to achieve this.’

Moon goes blood red this weekend: “Eclipse for the Americas”