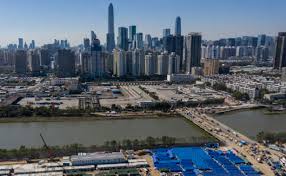 Stocks have opened lower in London, as China’s April slowdown added to concerns about the economic outlook.

European markets are also lower, with Germany’s DAX index down 0.5% and France’s CAC down 0.8%

Reuters has the details:

Property sales by value in April slumped 46.6% from a year earlier, the biggest drop since August 2006, and sharply widening from the 26.17% fall in March, according to Reuters calculations based on data from the National Bureau of Statistics (NBS) released on Monday.

Property sales in January-April by value fell 29.5% year-on-year, compared with a 22.7% decline in the first three months.

China’s property sector has been strugging with a liquidity crisis, after Beijing brought in rules to rein in property developers’ debt. That has been exacerbated by strict lockdown measures to combat Covid-19 outbreaks.

Last week, Chinese property developer Sunac became the latest company in the sector to default on a bond payment, in a real estate crisis that began at indebted property group Evergrande.

Economic weakness was widespread in April as retail sales contracted by an annual rate of -11.1%, industrial production by -2.9% and property investment by -2.7% on a year to date basis.

The latest data clearly highlights the economic damage inflected by the government’s continued commitment to their zero-COVID strategy. It will encourage further downgrades to forecasts for economic growth in Q2 and for this year as a whole. The current Bloomberg consensus forecast is for annual GDP growth to slow from 4.8% in Q1 to 4.0% which now appears too optimistic.

The longer the COVID restrictions remain in place the greater the downside risks to growth for the year as whole and the current Bloomberg consensus forecast for growth of 4.8% in 2022.

“The prolonged Shanghai lockdown and its ripple effect through China, as well as logistics delays resulting from highway controls… have severely affected domestic supply chains,”

Clearly, it is China’s zero-tolerance policy that is causing the industrial output and consumer spending to break down, and currently, they are sitting at their worst level since the pandemic began.

The data has made traders anxious about the global economic outlook. The general trend is likely to prevail in the market, which is that the dollar index continues to act as a safe haven, Treasuries will soar, and oil prices may move further lower; this shows that this week could be another week of weakness for the global equity markets.

You’re a father to many, no wonder everyone calls you ‘papa’ – Bawumia extols Duncan-Williams

Inflation, not E-levy, tops concerns of most investors – Analysts