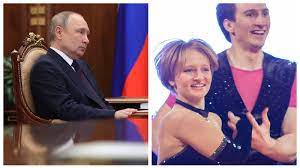 Since the start of his military campaign against Ukraine, Vladimir Putin has railed aggressively against pro-western Russians, whose appetite for European cuisine and climates meant “their mentality is there, not here, with our people”.

Yet his own daughter’s enthusiasm for sojourns to western Europe at least matches that of the oligarch “scum and traitors” he has decried, a joint investigation by independent Russian media outlet iStories and German magazine Der Spiegel suggests.

According to flight records obtained by the two publications, Putin’s youngest daughter, Katerina Tikhonova, flew to Munich in southern Germany “more than 50 times” between 2017 and 2019, travelling on chartered flights with full state support and in the company of employees of Putin’s own presidential security service.

Among the leaked cache of documents relating to a series of flights between Moscow and Munich in spring 2020 are the passports of a then two-year-old girl – apparently a previously unknown granddaughter of the Russian president – and Igor Zelensky, the former director of the Munich state ballet. The report said it is likely that Zelensky is Tikhonova’s partner and the father of her child.

Unrelated to the Ukrainian president of the same surname, 52-year-old Igor Zelensky was an internationally feted dancer before he became artistic director of the Bayerisches Staatsballet in 2016. He stepped down from his role on 4 April citing “private family reasons”, having failed to react to calls to condemn Putin’s war of aggression in Ukraine.

Zelensky still has a job on the supervisory board of Russia’s National Cultural Heritage Foundation, which is building a cultural centre in Crimea and is understood to be close to Putin.

An anonymous source at the Bavarian state ballet told Der Spiegel that Zelensky was “most likely a partner of Putin’s daughter”, before journalists had specifically asked about his family ties.

Tikhonova, 35, herself a former acrobatic rock’n’roll dancer, was previously married to Kirill Shamalov, once Russia’s youngest billionaire, though the couple were reported as having separated in 2018.

While iStories and Der Spiegel did not disclose the name of the 2017-born child, the outlets wrote that the girl’s patronymic was Igorevna, which would correspond to former ballet director Igor Zelensky.

Tikhonova did not respond to a request by Der Spiegel. Her and Zelensky’s current whereabouts are unknown.
theguardian