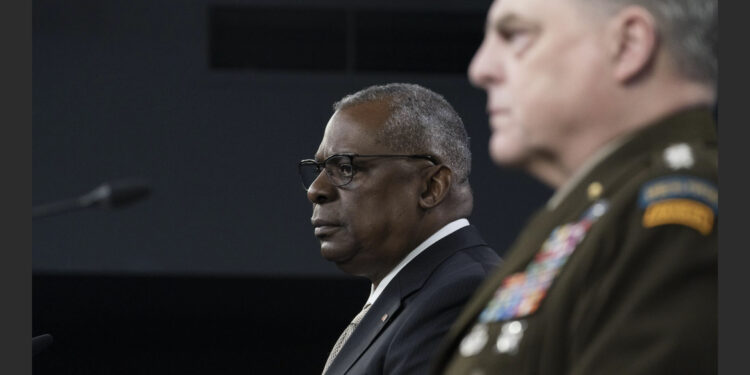 Nearly 50 defense leaders from around the world met Monday and agreed to send more advanced weapons to Ukraine, including a harpoon launcher and missiles to protect its coast, Defense Secretary Lloyd Austin told reporters.

And Gen. Mark Milley, chairman of the Joint Chiefs of Staff, said that “low–level” discussion is underway on how the U.S. may need to adjust its training of Ukrainian forces and on whether some U.S. troops should be based in Ukraine.

The U.S. withdrew its few troops in Ukraine before the war and has no plans to send in combat forces. Milley’s comments left open the possibility troops could return for embassy security or another non–combat role.

The U.S. embassy in Kyiv has partially reopened and is staffing up again, and there have been questions about whether the U.S. will send a Marine security force back in to help protect the embassy or if other options should be considered.

Asked if U.S. special operations forces may go into Ukraine, which officials have insisted they are not doing yet, Milley said that “any reintroduction of U.S. forces into Ukraine would require a presidential decision. So we’re a ways away from anything like that.”

Speaking to Pentagon reporters, Austin declined to say if the U.S. will send Ukraine high–tech mobile rocket launchers, which it has requested. But Austin said that some 20 nations announced Monday that they will send new packages of security assistance to Ukraine, as its war with Russia reaches the three–month mark.

In particular, he said that Denmark has agreed to send a harpoon launcher and missiles to Ukraine to help Ukraine defend its coast. Russia has ships in the Black Sea and has used them to launch cruise missiles into Ukraine. The Russian ships have also stopped all commercial ship traffic from entering Ukraine ports.

“We’ve gained a sharper, shared sense of Ukraine’s priority requirements and the situation on the battlefield,” Austin told reporters at the close of the virtual meeting with the defense leaders. “Many countries are donating critically needed artillery ammunition, coastal defense systems and tanks and other armored vehicles. Others came forward with new commitments for training.” 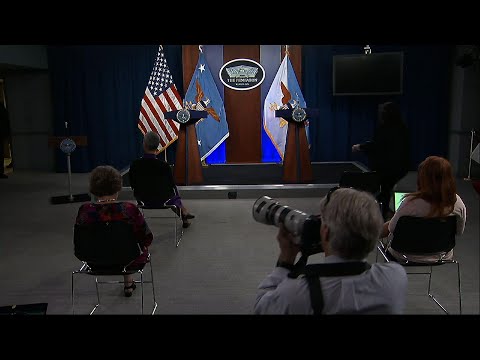 U.S. Secretary of Defense and Chairman of the Joint Chiefs say they will do all they can to support Ukraine during its war with Russia, but what the end of the conflict “looks like will be defined… by the Ukrainians and not by us.” (May 23)

The U.S. and other countries have been training Ukrainian forces in nearby European countries.

“The nature of the fight, as you’ve heard us describe a number of times is … really shaped by artillery in this phase,” said Austin. “And we’ve seen serious exchanges of artillery fires over the last several weeks.”

Austin said that during the virtual meeting, Ukraine officials made clear their security needs. And he said those are consistent with what has been identified in recent weeks — long–range artillery and rocket systems, armored personnel carriers and drones.

Milley provided the greatest detail to date on the increased U.S. presence in Europe since Russia invaded in late February. Last fall. there were roughly 78,000 U.S. troops in the region, and that has gone up to 102,000 — including 24 surface ships, four submarines, 12 fighter jet squadrons, two combat aviation units, and six Army brigade combat teams, along with their division and corps leadership.
AP

After 3 months of war, Life in Russia has profoundly changed