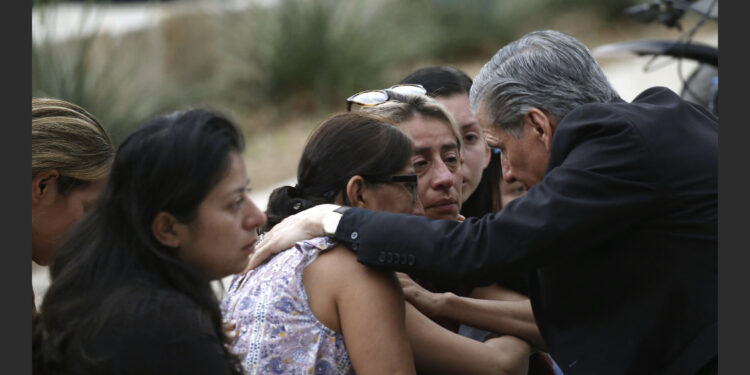 This is a profoundly shocking tragedy, yet in America it is also depressingly familiar. The grief and sympathy being expressed around the country is genuine. But no one is genuinely surprised that this could happen.

There have already been 27 school shootings this year alone. Young school children routinely rehearse what to do if a gunman enters their classroom.

It’s only 10 days since ten people were killed in a mass shooting in New York.

Politicians recognise this a problem almost unique to America, where guns have overtaken car crashes as the leading cause of death for children and teenagers. But it’s a problem that politics seem incapable of solving. Deeply entrenched views on gun control are not changed in response to events like the tragedy in Uvalde.

“Why do we keep letting this happen?” asked President Biden. “Why are we willing to live with this carnage?”

But there is no sign that Democrats will get any closer to passing tighter gun control legislation. Some Republicans are already accusing them of using this latest school shooting to cynically further their own political objectives

Robb Elementary School will join the roll call of school shootings along with Sandy Hook and the Parkland shooting. The killing of innocent schoolchildren has reignited the debate over guns in America, but has not brought it any closer to a resolution

As evening fell police remained outside the community centre in Uvalde braving an intense rainstorm.

Earlier, cries and sobs could be heard from outside as family members who gathered there received the devastating news that their children had been killed.

Others were asked to give DNA samples to help identify some of the young victims.

Just a few blocks from the Robb Elementary school, a small vigil was held for the victims and survivors of the attack.

Karla Bohman’s voice cracked as she told the group about a family friend whose young daughter, a student at the school, was among those still unaccounted for.

“They don’t know if she’s in surgery or one of the fatalities, but they know she’s a victim of some sort because she’s missing,” Bohman cried. “I can’t believe this.”
Cheryl Juhasz, a lifelong resident of Uvalde, quietly wept during the prayer.

“You can’t comprehend evil like this. No matter where it happens, but it’s harder when it happens at home.” 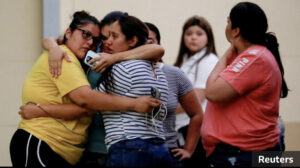 School district superintendent Hal Harrell said the school year had been ended early in the wake of the shooting.

In a speech from the White House, US President Joe Biden said he was “sick and tired” of responding to mass shootings, as he called for gun control.
“How many scores of little children who witnessed what happened – see their friends die, as if they’re in a battlefield, for God’s sake,” he said. “They’ll live with it the rest of their lives.”

He ordered that flags at the White House and other US federal buildings be flown at half-mast in honour of the victims in Uvalde.

School shootings have become recurring emergencies in the US, with 26 recorded last year, according to EdWeek, an education trade publication.

Active shooter lockdown drills are a common part of the school curriculum, from primary to high school.

The 2012 shooting at Sandy Hook Elementary School in Connecticut was the deadliest such attack. Twenty of the 26 victims were between the ages of five and six.

Speaking on the floor of the US Senate in Washington DC on Tuesday, Connecticut Democratic Senator Chris Murphy begged his colleagues to pass gun control legislation.

“These kids weren’t unlucky,” he said. “This only happens in this country. Nowhere else, nowhere else do little kids go to school thinking that they might be shot that day.”

But Texas Senator Ted Cruz, a Republican, rejected the calls for gun control. He said restricting the rights of “law-abiding citizens… doesn’t work. It’s not effective. It doesn’t prevent crime.”

Guns overtook car crashes to become the leading cause of death for US children and teenagers in 2020, according to data released by the Centers for Disease Control and Prevention (CDC) last month.

On Monday, an FBI report found that “active shooter” rampage attacks have doubled since the coronavirus began in 2020.