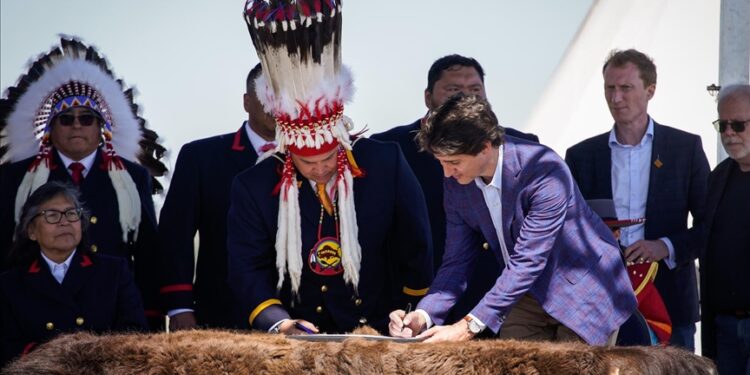 Canada signed a CAN$1.3 billion ($1.03 billion) land settlement deal with the Siksika First Nation on Thursday, one of the largest in the country’s history.

“This settlement aims to right past wrongs dating back over a century when the Government of Canada broke its Blackfoot Treaty (Treaty 7) promise and wrongfully took almost half of the Siksika Nation’s reserve land, including some of the most productive agricultural and mineral-rich lands, to sell to settlers,” said a statement from Prime Minister Justin Trudeau’s office.

Trudeau and Chief Ouray Crowfoot of the Siksika Nation signed the deal during a ceremony at Blackfoot Crossing Historical Park in Alberta province.

Crowfoot said it was important to understand that this settlement is not a gift from the Canadian government.

“Settling this case, which dates back to 1910, is long overdue for the People of Siksika Nation,” he said in the statement. “I want to make that clear: Canada is not giving CAN$1.3 billion to Siksika.”

“Canada is righting a wrong committed over a century ago when Canada illegally took 115,000 acres of lands provided to Siksika along with other illegal acts.”

Across the country, the government of Canada is attempting to correct colonial acts in which land was taken from Indigenous tribes.

“In order to move forward as a country, we will work together to address the harms of the past,” Minister of Crown-Indigenous Relations Marc Miller said in the statement.

Trudeau said the funds will allow the Siksika First Nation to improve conditions for its people.

“This settlement will enable you to invest in your priorities like infrastructure, education and supports for elders and youth,” he told those gathered at the ceremony, as reported by the Canadian Press.

“It will create new economic, social and cultural opportunities,” he added.

Ronaldo will stay at Man United but wants “things” changed