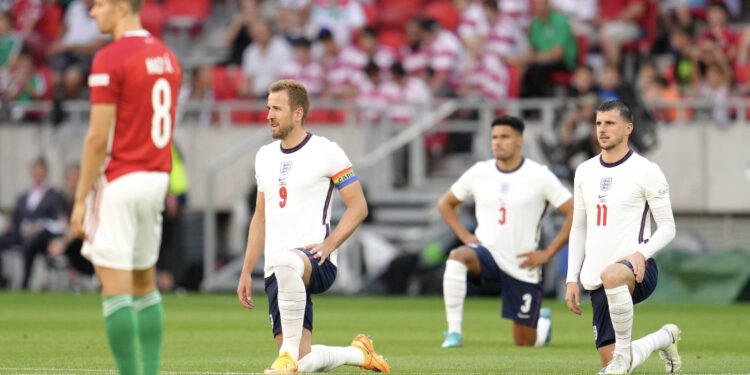 This was not how Gareth Southgate had envisaged the start of the countdown to the Qatar World Cup. On a night when more than 30,000 Hungarian schoolchildren massed into this boisterous arena, blowing their vuvuzelas, making a screeching din from start to finish, England produced one of their worst performances for some time.

They had entered this Nations League opener – nominally to be played behind closed doors because of the bad behaviour of Hungary fans during Euro 2020 but with kids allowed under a Uefa loophole and lots of them – boasting an intimidating record. Eighteen wins in 22 matches and only one defeat – on penalties to Italy in last summer’s Euro final.

But Southgate’s team were strangely passive, lacking bite in the areas that mattered, especially the final third, and they came to threaten too late, playing with the bit between their teeth only after they fell behind to Dominik Szoboszlai’s 66th minute penalty. The award was soft – rather like England up to that point – but it was correct and punishment for a moment of clumsiness from Reece James, who had only just entered as a substitute.

ames touched a cross back towards his goalkeeper, Jordan Pickford, and worried that he had not put enough on it. And so he stepped across Zsolt Nagy to make sure that the Hungary wing-back could not give chase. Nagy went down theatrically and England had a sinking feeling.

Szoboszlai once told Neymar before he took a penalty that he never missed and his conversion here, dragged low into the bottom corner, bristled with conviction. To tremendous acclaim, Hungary were on their way to a first win over England since 1962.

England had flirted with problems during a first half in which they were second best and, although they pressed hard on to the front foot after the goal, they could not find a way back. The margin of defeat might have been heavier had Andras Schafer not blazed high with the goal gaping on 81 minutes. The chance came after the substitute Laszlo Kleinheisler had sashayed past Harry Maguire with ease before seeing a shot parried by Pickford.

England have only five more matches before their opening tie against Iran in Qatar on 21 November, with the next of them coming against Germany in Munich on Tuesday night. They will need to play with a good deal more cohesion against their old rivals.

England had met Hungary twice before this season in World Cup qualification, at this venue when a 4-0 win was overshadowed by racist chants from the home crowd and in a 1-1 draw at Wembley, when Hungary showed how difficult they can be to break down.

They came to play here, eager at the outset to exploit the spaces behind England’s wing-backs, Trent Alexander-Arnold and James Justin, who toiled defensively on his debut and was taken off at half-time. Alexander-Arnold looked OK when facing forward; less so in the other direction.

Hungary almost made the dream start. Addressing a high diagonal from left to right, Loic Nego volleyed over a sumptuous first-time ball, low along the corridor of uncertainty behind England’s back line, and it was made to measure for Szoboszlai. Out flew Pickford and he certainly spooked Szoboszlai, who could only prod past him with little power. The ball trickled goalwards but Conor Coady was able to get back and swipe clear.

The tone had been unusual, to say the least, before kick-off, with England emerging to boos for their warm-up, albeit the pitch of them rather squeakier than normal. What would happen when England took the knee? In the controversial fixture here last September, the anti-racism gesture had been met with ear-splitting whistles. Here, incredibly, there was another round of boos.

Nego was a menace before the interval. The right wing-back almost picked out Roland Sallai in the opening quarter, the forward having drifted clear of Alexander-Arnold, but he could not make a decisive contact and it would not be the last time that Nego worried England with the weight and flight of his deliveries.

England were too open in the defensive transitions in the first half, offering Hungary hope. Szoboszlai sent Zsolt Nagy galloping clear of Alexander-Arnold on the half hour and the wing-back made Pickford save. There was also a heart-stopping moment for the goalkeeper shortly afterwards. Hungary won the ball high up and, when it broke to Adam Szalai just inside the England half, he saw Pickford off his line and went for the spectacular. It looked as though he had pulled it off only for the long-range lob to veer off target at the last.

England lacked punch. Jarrod Bowen was a willing runner off the right on his debut and, after seeing an early effort blocked by Attila Szalai, his eyes lit up when Alexander-Arnold picked him out with a cross from the right. Bowen fluffed the side-on volley. Coady headed high from an Alexander-Arnold corner while Mason Mount could not finish from a Harry Kane cross.

Bukayo Saka, on for Justin, had a nice moment when he glided away from two red shirts to work Peter Gulasci from a tight angle and England pushed after the penalty. Bowen sent a second side-on volley at the goalkeeper, the disappointing Jude Bellingham had an effort blocked and Coady headed narrowly wide from a set piece. At the end, Kane shot weakly when he might have squared for the substitute Jack Grealish. England had come up short.