At least 50 people are feared dead after gunmen opened fire on worshippers and detonated explosives at a Catholic church in southwestern Nigeria on Sunday, officials said.

The violence at St. Francis Catholic Church in Owo town, in Ondo State, happened during the morning service on Pentecost Sunday in a rare attack in the southwest of the African country.

While much of Nigeria has struggled with security issues including Islamic extremism, Ondo is widely known as one of Nigeria’s most peaceful states.

No group claimed responsibility for the attack and the motives and the death toll were not immediately clear, but President Muhammadu Buhari condemned the ‘heinous killing of worshippers’.

Videos appearing to be from the scene of the attack showed church worshippers lying in pools of blood while people around them wailed.

This photograph was allegedly taken in St. Francis Catholic Church in Owo town, in Ondo State, in the aftermath of the attack

Ondo state governor Oluwarotimi Akeredolu said in a statement it was a ‘vile and satanic attack’ and appealed to the security forces to track down the assailants.

In a tweet, he added: ‘Our hearts are heavy. Our peace and tranquility have been attacked by the enemies of the people.’

Local politician Ogunmolasuyi Oluwole, who visited the scene and also the hospital where many of the wounded were being treated, said among the dead were many children.

‘It’s still premature to say exactly how many people were killed. But many worshippers lost their lives while others were injured in the attack,’ she said.

Adelegbe Timileyin, who represents the Owo area in Nigeria’s lower legislative chamber, said the presiding priest was abducted as well. 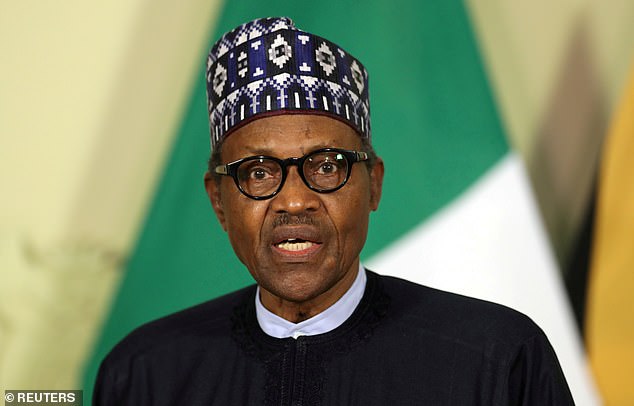 No group claimed responsibility for the attack and the motives and the death toll were not immediately clear, but President Muhammadu Buhari (above) condemned the ‘heinous killing of worshippers’ 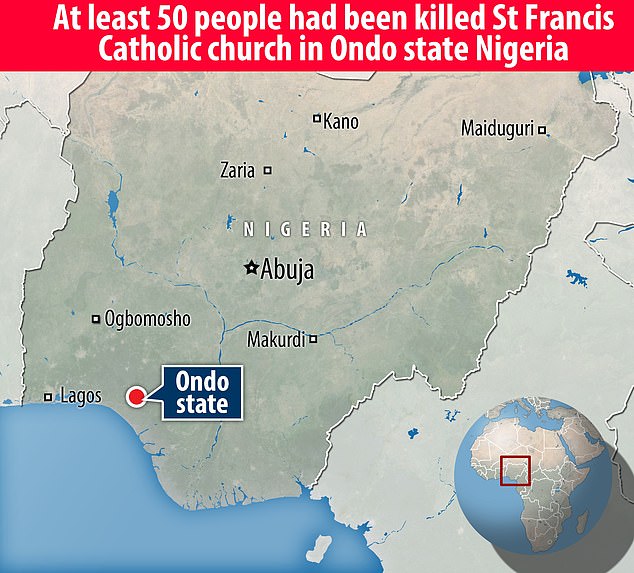 A witness, who gave his name as Abayomi, said at least 20 worshippers had died in the attack.

‘I was passing through the area when I heard a loud explosion and gunshots inside the church,’ he continued.

He said he saw at least five gunmen on the church premises before he ran away for safety.

Gun and bomb attacks are rare in Ondo state, but Nigeria’s military is battling a 12-year-old jihadist insurgency in the northeast, kidnapping gangs in the northwest and separatist agitation in the southeast.

Nigeria’s security forces did not immediately respond to enquiries as to how the attack occurred or if there are any leads about suspects. Owo is about 215 miles east of Lagos.

‘In the history of Owo, we have never experienced such an ugly incident,’ said lawmaker Oluwole. ‘This is too much.’
Story by Jonathan Ross