in Business
Reading Time: 7 mins read
A A
0 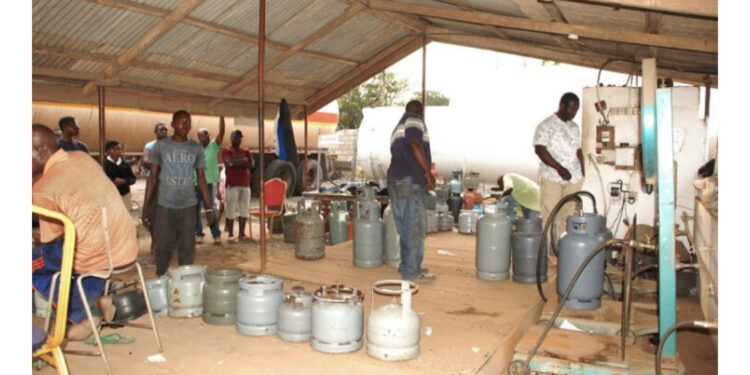 Many Ghanaians are struggling to afford the cost of re-filling their gas cylinders due to the increased prices of Liquefied Petroleum Gas (LPG).

Their efforts to minimise the cost of feeding by preparing their own food is being hampered by the excessively high cost of fuel such as the LPG.

At a time when the cost of food from the restaurant is hitting the roofs, many say their woes have been aggravated as they suffer to fill their cylinders for domestic cooking.

Two weeks ago, a resident of Alajo called Deborah, visited the gas station to buy GH¢90 worth of gas.

Filling a 14.5kg gas cylinder would cost her GH¢180 but she could only afford less than half of that.

The LPG had run out so she visited the filling station to fill it again but this time around, Deborah could only afford GH¢50 out of GH¢180 needed to fill her cylinder fully.

“If I want my cylinder to be full, I have to pay GH¢180; even the smallest size is going for about GH¢80. It never used to be so; it isn’t easy at all. I would have wished to fill my cylinder fully, but I don’t have enough money.

“The one we used at work cost us GH¢250 and that even lasts a week. If I don’t have money, I’d opt for charcoal,” she said in an interview on JoyNews’ monitored by NSEMGH,Living Standard Series on Wednesday.

For her and others who have come to re-fill their cylinders, the price of Liquefied Petroleum Gas (LPG) has become unbearably expensive and erratic.

In the last month, the price of LPG has increased at least three times.

However, the price per kilogramme in March this year saw more than 23% rise.

Consumers coughed out about GH¢142 to afford the same cylinder size – further price fluctuations last month has worsened the situation.

A pump attendant, Maxwell, explained why operations changed from the scale system to the pump system.

“When we were operating the scale system, the prices were fixed; it could not be adjusted. But we had to adopt the pump system, so those who cannot afford the increment can also buy.

Sharing the cost of buying the commodity is a smart survival mode for the likes of Prince, a student at the Ghana Technology University.

He splits the cost with his roommate.

“I am here to fill my gas cylinder. We ran out some three days ago. I am currently with a roommate; he filled it with barely GH¢40 three months ago. So, I am here to fill but I couldn’t even fill it with GH¢50 because it actually takes GH¢74 to fill.”

It is increasingly becoming difficult for breadwinners to buy for dependents.

Derek is supposed to squeeze almost GH¢200 out of his income every month, to fill two 7kg cylinders for his mother.

He loves to support his mother, but he is worried about the price increases is making it difficult for him to cover the cost.

“It has really affected everybody as all of us know how the economy is going – you buy something today, but return tomorrow and everything would have changed.

Supervisor Sylvarius Akentuna says the price instability is threatening the business and employment of workers.

“If the customers are not coming, where is the good for us? There is no goodness in it,” he said.

Until there is an intervention from the government on the price of gas, Deborah, Prince, Derek, and Sylvarius may turn to charcoal which could go against the government’s goal of protecting the environment.

10% Of Public Sector Workers Must Be Sacked – Kusi Boafo