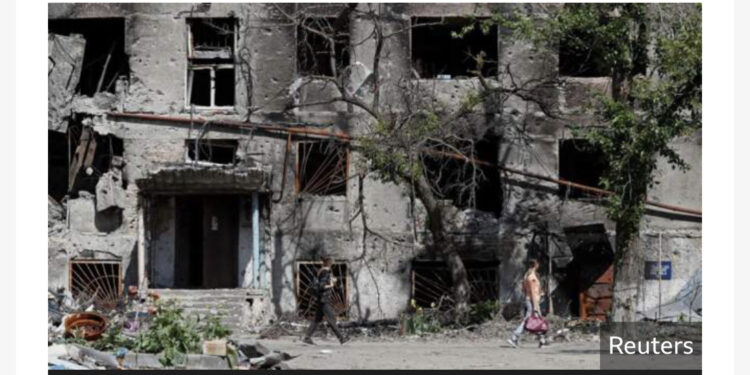 Mariupol’s mayor, Vadym Boychenko, warned cholera and other deadly diseases could kill thousands of people in the Russian-occupied city in southern Ukraine as corpses lie uncollected amid rising temperatures.

Boichenko, who is no longer in the devastated city, said wells had been contaminated by the corpses of people killed during weeks of Russian bombardment and siege, and that the collection of bodies by the city’s Russian occupiers was proceeding slowly, Reuters reports.

There is an outbreak of dysentery and cholera. This is unfortunately the assessment of our doctors: that the war which took over 20,000 residents … unfortunately, with these infection outbreaks, will claim thousands more Mariupolites.

Mariupol has been placed into quarantine, he said earlier. “Nobody is let in or out.” He told the BBC that “there are a lot of dead” in the city, adding:

They have not cleared the bodies of those they killed in the bombings. Many bodies are still under the ruins. The problem is compounded by the absence of garbage collection – the system hasn’t been functioning since February.

The situation was being made worse by it now being summer and hot, with heavy rain ruining makeshift burial places as well as a lack of functioning water and sewage systems, he said.

The resulting mix flows towards rivers and wells, where people draw and use it. This water is already poisoned. It has already propagated throughout the city. The occupation authorities bring water to the city, but not enough. People still go to the wells and take that poisoned water.

Earlier today, Britain’s defence ministry said there was a risk of a major cholera outbreak in Mariupol because medical services were likely near collapse. Russia is struggling to provide basic public services to the population in Russian-occupied territories, it said.

About 100,000 people are in the city that once had a population of about 430,000 before Russian troops invaded the country, according to Ukrainian officials.