‘Enough is enough’: thousands rally across US in gun control protests 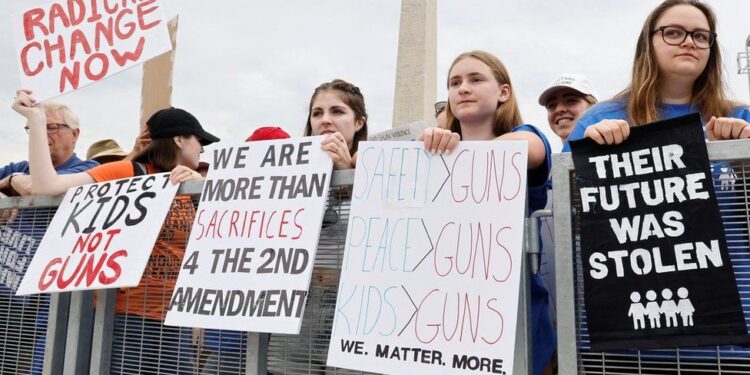 Rallies for gun reform were held in Washington, New York, other US cities and around the world on Saturday, seeking to increase pressure on Congress to act following a spate of mass shootings.

In Washington, the son of an 86-year-old victim in the Buffalo supermarket shooting said: “Enough is enough. We will not go quietly into the night.”

The March for Our Lives rallies came less than a month after 10 people were killed in the racist attack in Buffalo, New York and 19 children and two teachers were killed at an elementary school in Uvalde, Texas.

Other mass shootings, widely defined as shootings in which four people or more excluding the shooter are hurt or killed, have also helped put the issue center-stage.

March for Our Lives was formed in 2018 after a shooting at Marjory Stoneman Douglas high school in Parkland, Florida, in which 14 students and three adults were killed. Organisers estimated a million people, mostly young, joined protests then.

The group helped force Republicans in Florida to enact reforms including raising the age to buy long guns, including AR-15-style rifles, from 18 to 21; enacting a three-day gap between purchase and access; allowing trained school staff to carry guns; and putting $400m into mental health services and school security.

Florida lawmakers also approved a “red flag law” that can deny firearms to individuals believed to pose a danger to themselves or others.

Organisers on Saturday were focusing on smaller marches at more locations. The DC protest was expected to draw 50,000. The 2018 march filled downtown Washington with more than 200,000 people.

By noon on Saturday, thousands had gathered around the Washington Monument. Protestors held signs demanding justice for the victims of Uvalde and Buffalo. Speakers included activists, family members of those killed and shooting survivors.

Garnell Whitfield, son of Ruth Whitfield, an 86-year-old killed in Buffalo, told the crowd he and his family were “still in a state of shock”. When she was killed, Ruth Whitfield was buying groceries after visiting her husband at a nursing home.

“We are being naive to think that it couldn’t happen to us,” Garnell Whitfield said. “Enough is enough. We will not go quietly into the night as victims. We hear a lot about prayer, and prayer is wonderful and we thank you for your prayers. But prayer is not a noun, it’s a verb. It’s an action. You pray, then you get up and you work.”

The parents of Joaquin Oliver, a 17-year-old killed in the Parkland shooting, wore shirts bearing a picture of their son.

“I was hoping to avoid attending a march like this ever again,” Manuel Oliver said, standing next to his wife, Patricia. “Our elected officials betrayed us and have avoided the responsibility to end gun violence.”

The crowd heard from two founders of March for Our Lives, David Hogg and X Gonzalez, both Parkland survivors.

“All Americans have a right to not be shot, a right to safety,” Hogg said. “Nowhere in the constitution is unrestricted access to weapons of war a guaranteed right.

“We’ve seen the damage AR-15s do. When we look at the innocent children of Uvalde, tiny coffins horrify us. Tiny coffins filled with small, mutilated and decapitated bodies. That should fill us with rage and demands for change.”

Hogg emphasized state and local gun legislation passed since 2018. He noted a red flag law that saw a court-ordered disarming of an individual who sent his mother a death threat. He encouraged the crowd to bring the issue of gun control to the polls.

“If our government can’t do anything to stop 19 kids from being killed and slaughtered in their own school and decapitated, it’s time to change who is in government,” Hogg said.

“I’ve spent these past four years doing my best to keep my rage in check. To keep my profanity at a minimum so everyone can understand and appreciate the arguments I’m trying to make, but I have reached my fucking limit. We are being murdered. Cursing will not rob us of our innocence.

“You say that children are the future, and you never listen to what we say once we’re old enough to disagree with you, you decaying degenerates. You really want to protect children, pass some fucking gun laws.”

Gonzalez said Congress had started treating mass shootings as a “fact of life”, like natural disasters. She criticized politicians for their relationships with gun lobbyists, saying: “We saw you cash those fucking checks. We as children did the heavy lifting for you. Act your age, not your shoe-size, Congress. You ought to be ashamed.”

Yolanda King, who spoke at the 2018 March for Our Lives rally when she was nine, spoke of hope for action after Uvalde and Buffalo. Now 14, she evoked her grandfather, Martin Luther King Jr.

“My grandfather was taken from the world by gun violence. Six years after his death, his mother, my great-grandmother, was killed in church during Sunday service. We have all been touched by tragedy, we have all been lifted up by hope.

Dozens of other rallies saw protesters call for stronger legislation. In Buffalo, hundreds protested outside the supermarket where the shooting happened. The group held a moment of silence and chanted “Not one more”.

March for Our Lives has called for an assault weapons ban, universal background checks for gun purchases and a national licensing system.

The US House has passed bills that would raise the age limit to buy semi-automatic weapons and establish a federal “red flag” law. But previous such initiatives have stalled or been watered down in the Senate. The new marches were to take place a day after senators left Washington without reaching agreement in guns talks.

“I join them by repeating my call to Congress: do something,” the president said, adding that Congress must ban assault weapons, strengthen background checks, pass red flag laws and repeal gun manufacturers’ immunity to liability.

“We can’t fail the American people again,” the president wrote.

This week, mass shooting survivors brought their message to Capitol Hill. Among them was Miah Cerrillo, an 11-year-old girl who survived the attack in Uvalde, Texas. She told members of Congress how she covered herself with a dead classmate’s blood.

The actor Matthew McConaughey appeared in the White House briefing room to press for reform and make highly personal remarks about his hometown, Uvalde.