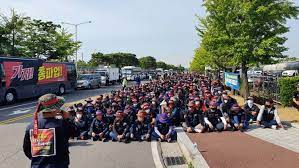 A week-long strike by truck drivers in South Korea threatens to be the latest bottleneck in the global supply chain after industry bosses warned that the production of computer chips across Asia faced disruption.

With the worldwide flow of goods struggling with hurdles such as lockdowns in China and the war in Ukraine, Tuesday saw the first concrete sign that the strike was affecting South Korea’s world-leading semiconductor sector.

The Korea International Trade Association (Kita) said a Korean company that produces isopropyl alcohol (IPA), a raw material for cleaning chip wafers, is facing complications in shipping to a Chinese company that in turn supplies wafers to chip manufacturers.

Kita said in a statement that about 90 tonnes, or a week’s worth of shipments have been delayed.

The truckers’ union said in a statement on Tuesday it would continue its general strike and condemned the transport ministry for being “neither willing to talk nor capable of resolving the current situation”.

The union is protesting against soaring fuel prices and demanding minimum pay guarantees. Four rounds of negotiations with the government have failed to find a compromise.

On Friday, police detained several dozen drivers for blocking traffic and disrupting the movement of goods near factories. Fifteen were detained for allegedly obstructing business outside an alcoholic drinks factory near Seoul.

The Cargo Truckers Solidarity union claimed that production at Hyundai’s biggest factory complex was halved last week due to component shortages brought about by the strike.
guardian

Lithuania to buy howitzers from France