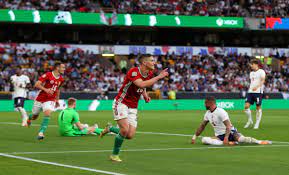 Some fans have already made up their minds. ‘You’re getting sacked in the morning,’ cried fuming supporters as they watched their side embarrassed on home soil.

It won’t come to that, Gareth Southgate has credit in the bank; the England manager will have time to come up with an answer ahead of a World Cup his team have a realistic opportunity of winning.

But this was a humbling experience here in Wolverhampton tonight. A humiliating one – England’s worst defeat since 1928. Make no mistake, the mental scars from this will stick. But most pertinently of all, it will raise doubts. 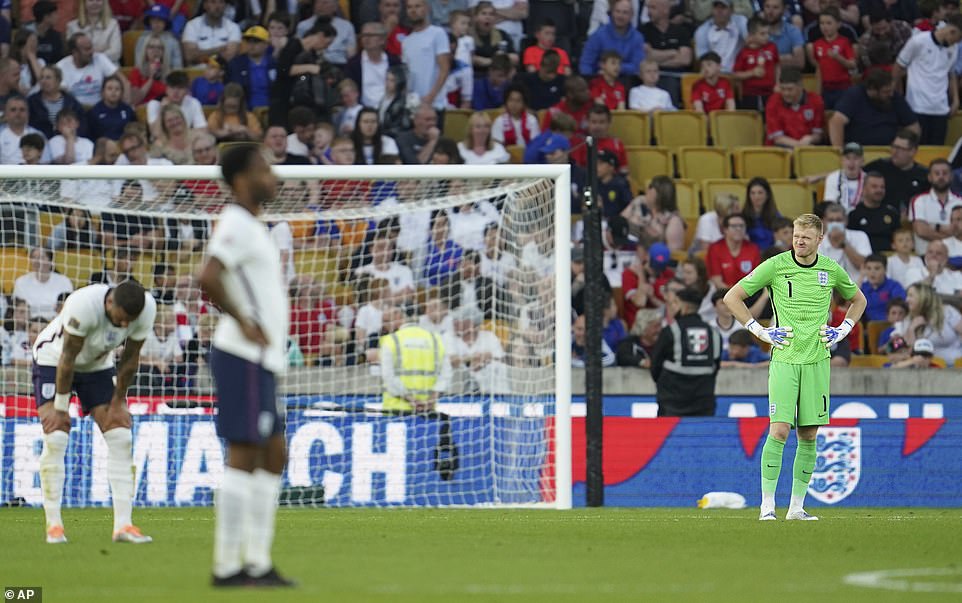 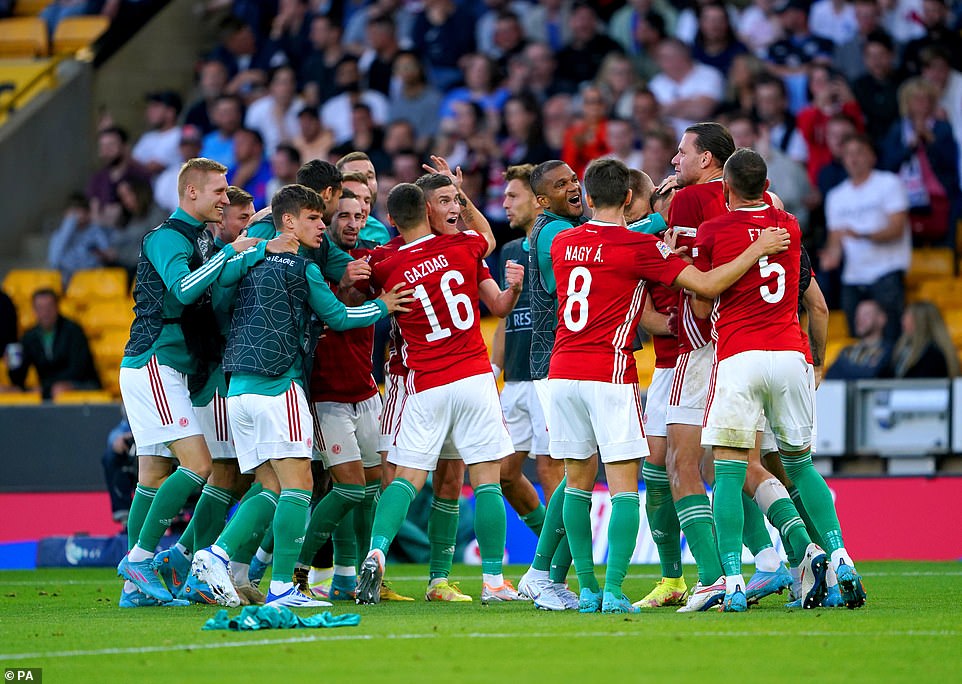 It was the night of dreams for the visitors, who were clinical in front of goal and are now top of a strong Nations League group 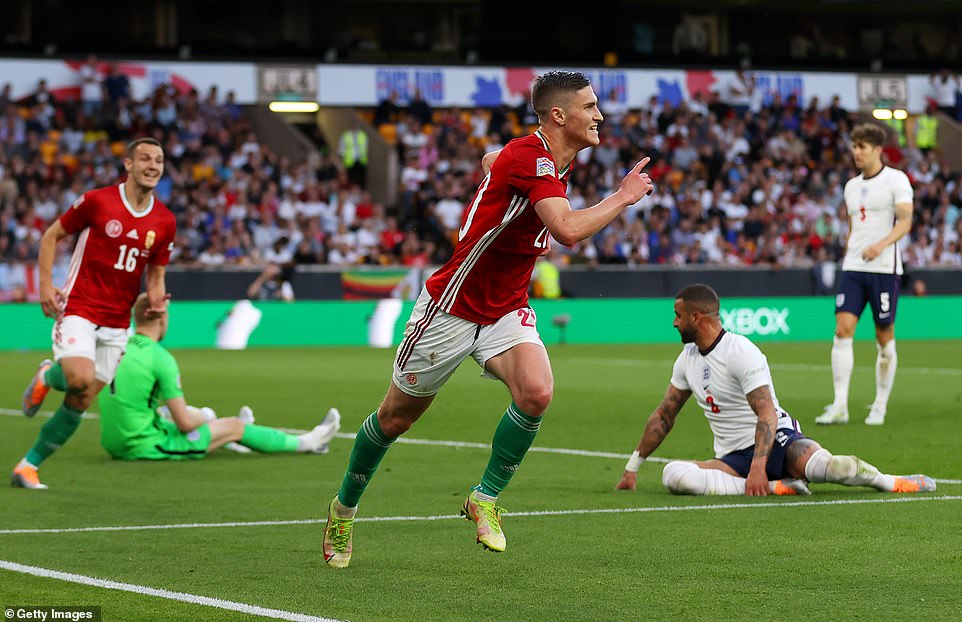 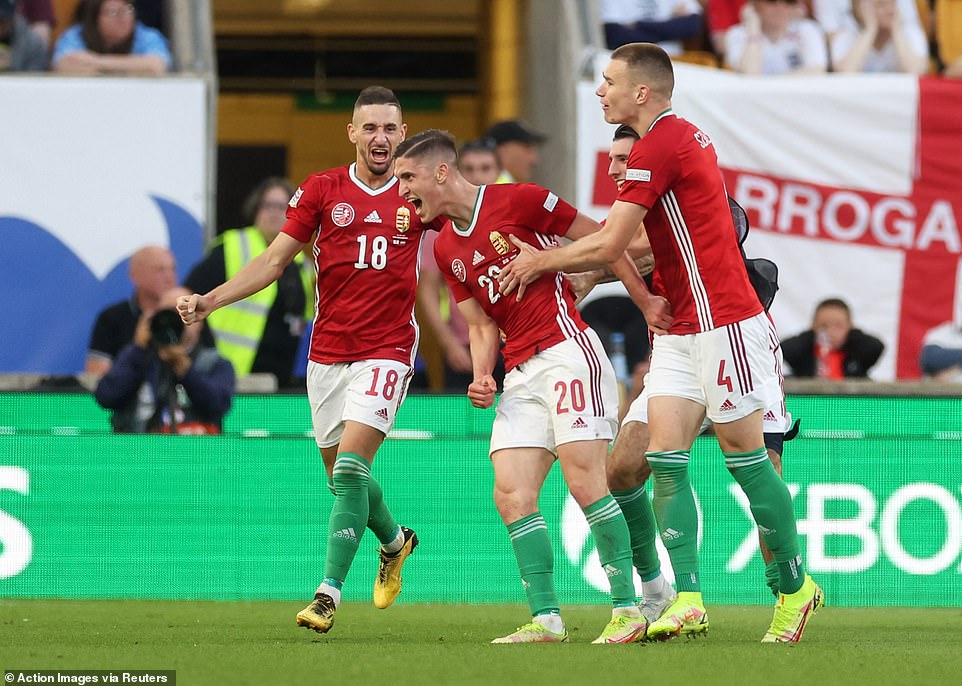 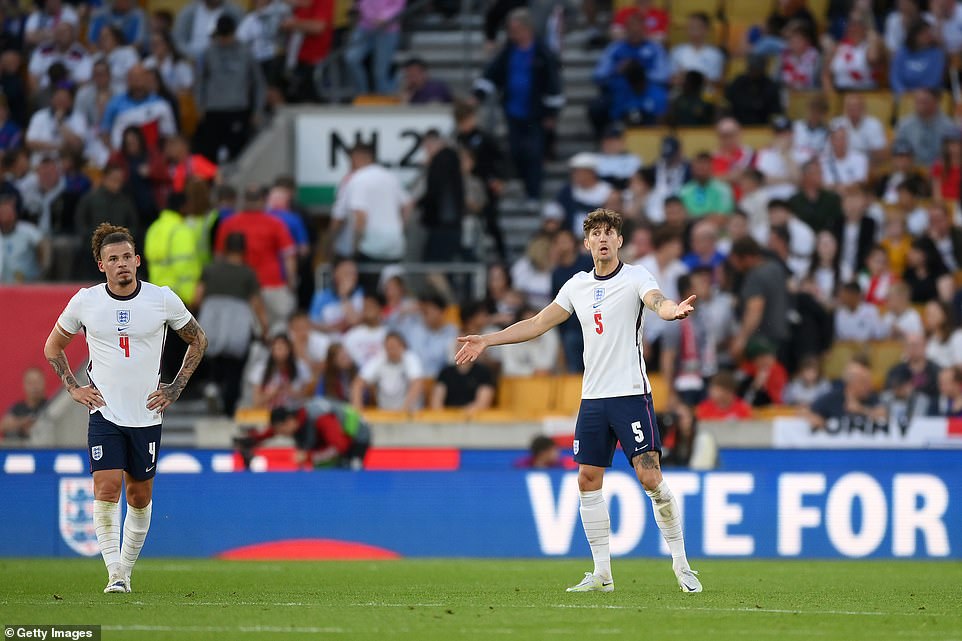 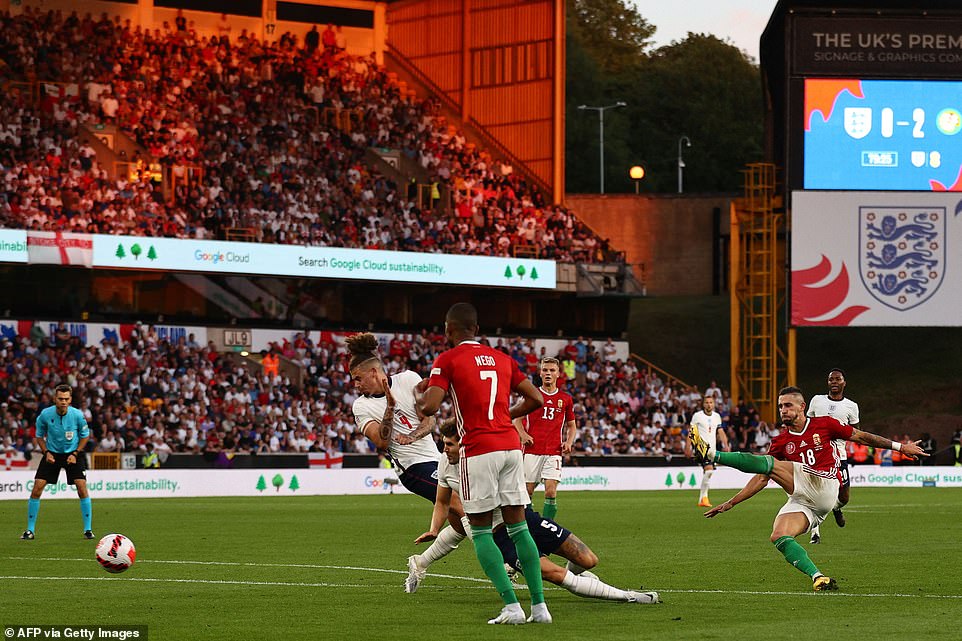 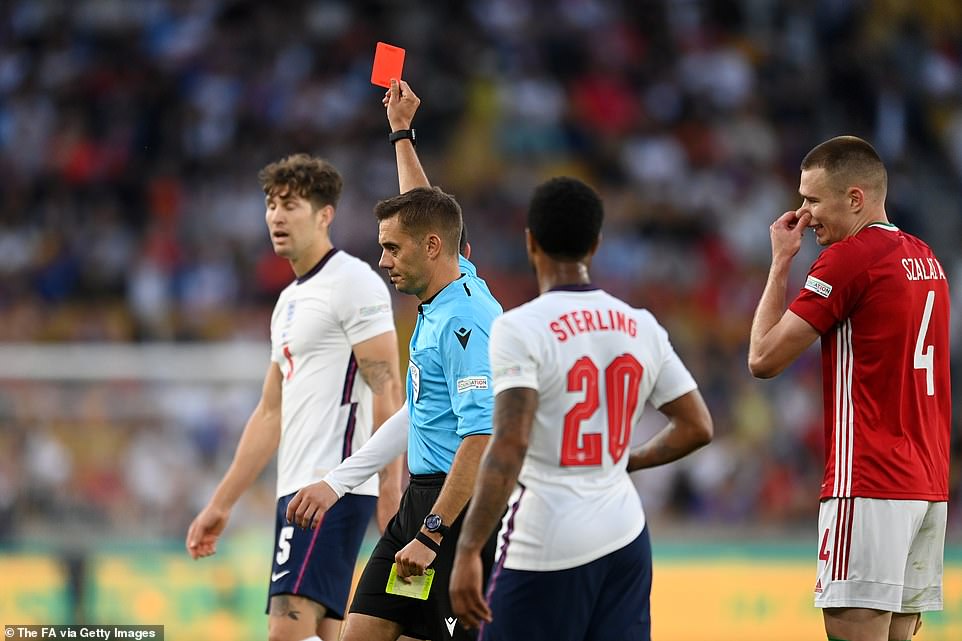 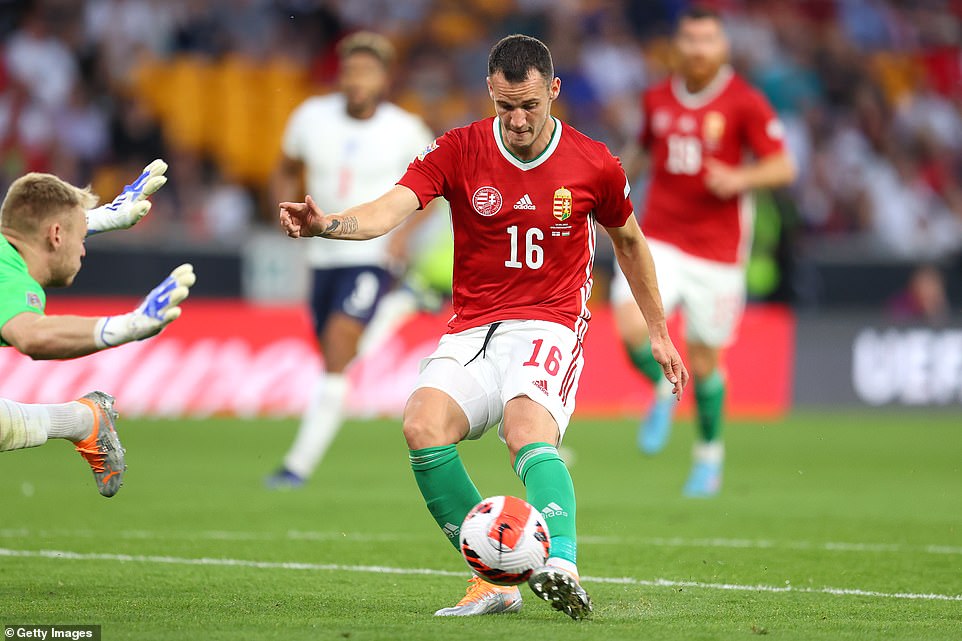 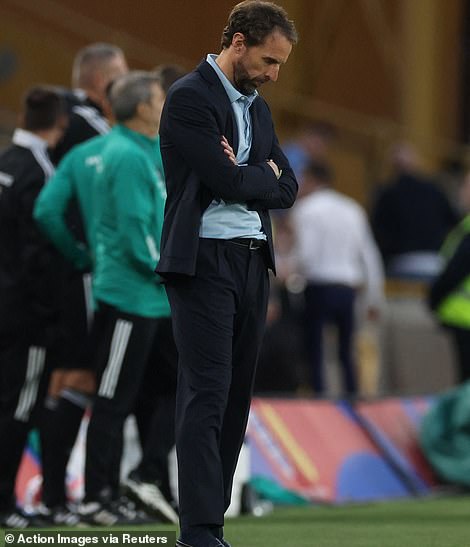 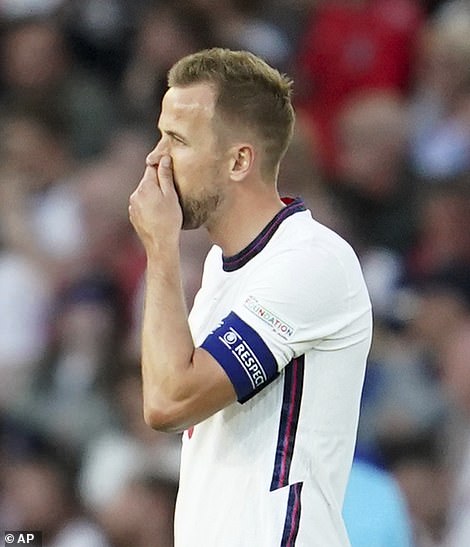 Not externally, because supporter and media pressure, or the ‘noise’ as England players and staff refer it to, is constant.

Within the squad, though, this is a night that will cut to bone. Are we as good as we think we are? Can we really win the World Cup?

They aren’t the kind of thoughts you want running through your head in the lead up to a major tournament.

But that’s exactly where England are after a summer of misery. Four games, no victories, no goals from open play and six conceded paints the bleakest of pictures.

Perhaps the only shred of comfort England can take from from a pathetic 10 day period that has seen them lose twice to Hungary is that at least the World Cup is still five months away.

Because if it was this summer, then England would be in trouble. Serious trouble.

For 15 minutes or so, England appeared to be in the ascendancy; one move that saw Harry Kane and James rip through Hungary’s right flank was particularly easy on the eye; Jarrod Bowen’s tame header at the end of the move was less convincing, however.

But events were about to turn drastically for hapless England – and they only have themselves to blame.

John Stones’ attempt at heading Dominik Szoboszlai’s free-kick clear was horribly misdirected, Harry Kane swung at thin air as he tried to rectify his colleague’s mistake – all that was left was for Roland Sallai to put England out of their misery.

The Hungarian forward’s finish was clinical, his effort whizzing past Aaron Ramsdale at the near post.

That sinking feeling has become all too familiar for Southgate this summer. England fell behind in three of the four matches they have played in June, it’s a problem that needs rectifying before the real business starts in November.

Yes, Hungary’s opener arrived against the run of play – but what does that matter?

Yes, this wasn’t a full strength England team – but, again, what does that matter? 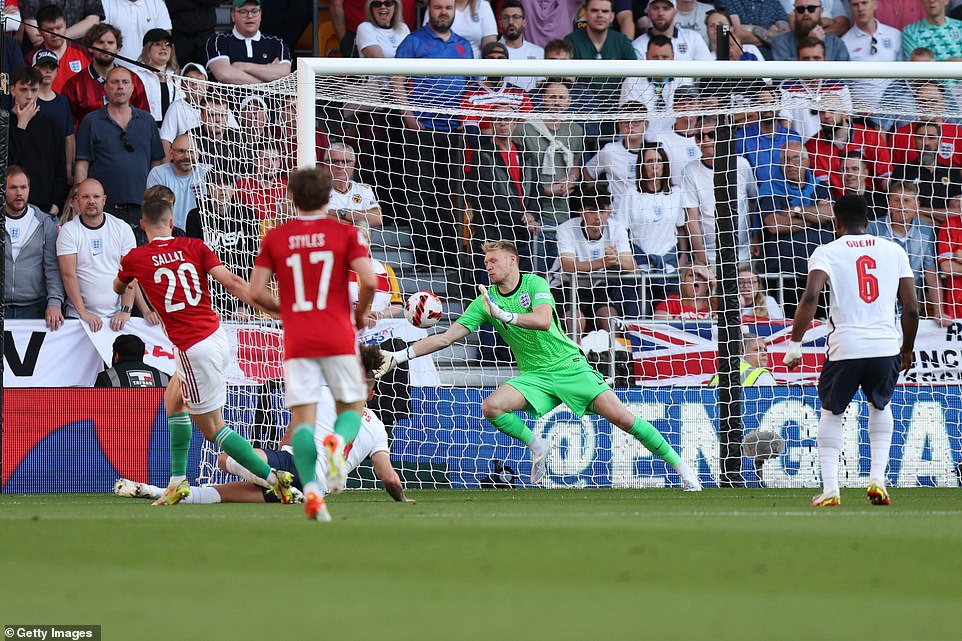 Sallai’s first goal of the evening was clinically put away, his effort whizzing past a helpless Ramsdale at the near post 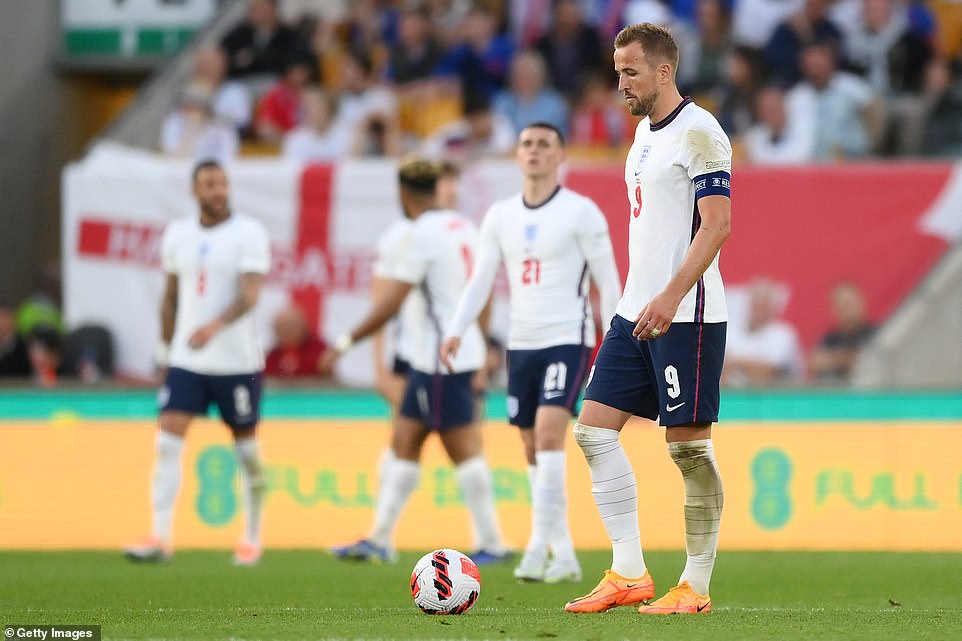 England were – for a second time in 10 days – heading for defeat against a team ranked 35 place below them in FIFA’s rankings. Now that does matter.

They tried to rally, but their best opportunity of the first half came courtesy of Hungary defender Willi Orban, whose header from Bukayo Saka’s cross was heading towards his own net before keeper Denes Dibusz spared his team-mate’s blushes.

Indeed, England could easily have found themselves 2-0 down before half-time after another Szoboszlai free kick sparked chaotic scenes in England’s defence as Reece James cleared Kalvin Phillips’ miscued header off the line.

Boos echoed round Molineux at half-time. No wonder.

Taking England on the road seemed a good idea earlier this year; the jam-packed crowd here at the home of Wolverhampton Wanderers seemed less enthused.

Southgate reacted; moving to a back-three having started the game with the four-man defence he, in an ideal world, would start with at the World Cup.

He also sent on Raheem Sterling at half-time, in place of Bowen who – despite the collective disappointment of England’s summer – can be quietly satisfied with his introduction into the international scene. 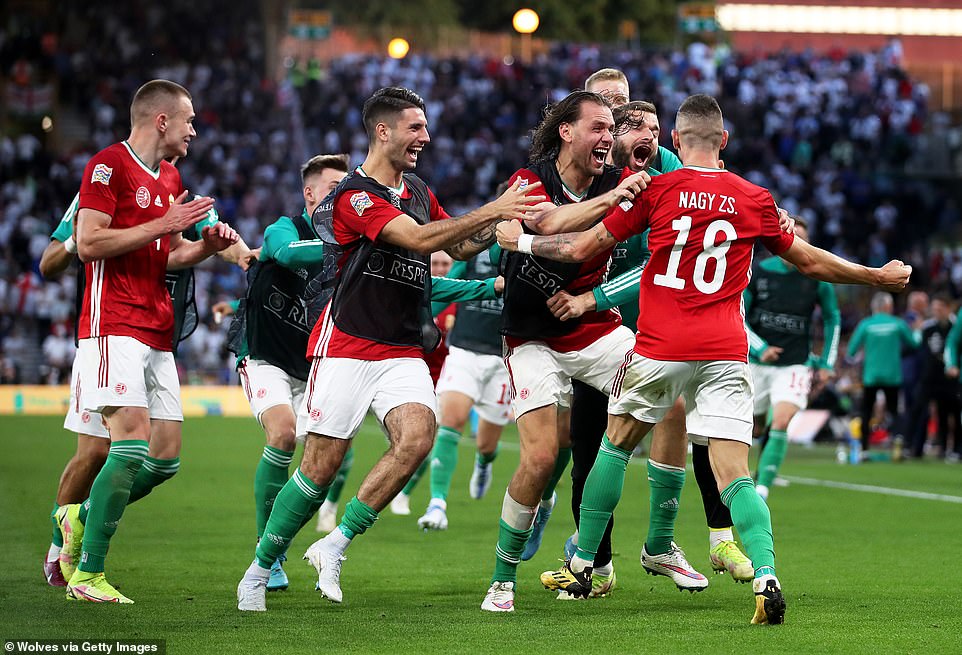 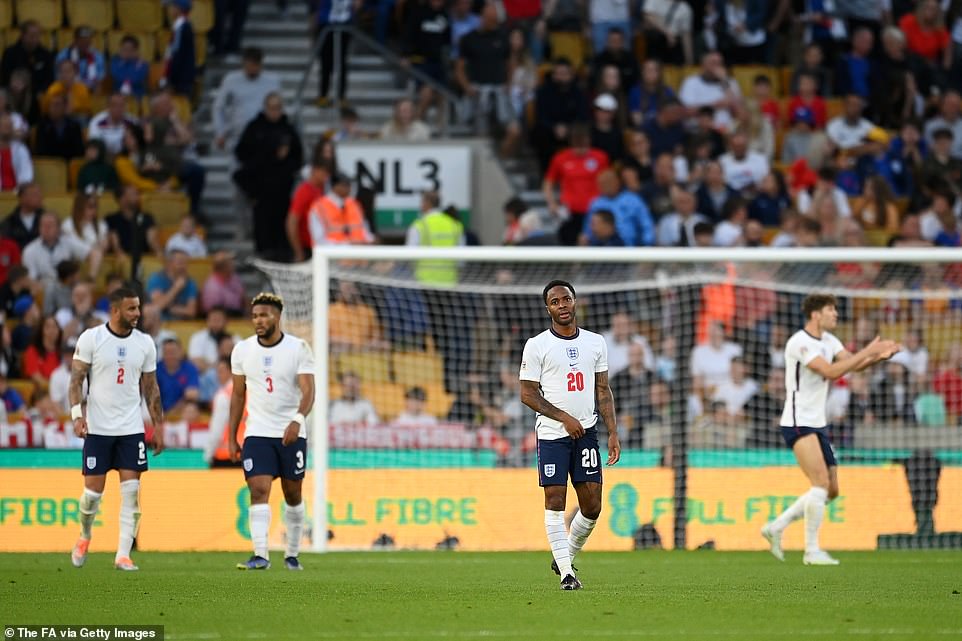 But this was a needs must moment for Southgate. Avoiding defeat was must; Sterling was clearly needed to achieve that.

As you might expect, England were slightly more incisive with Sterling on the pitch. Kane just failed to get a toe onto a dangerous low cross from James, who was giving a good account of himself despite being out of position at left-back.

But still England toiled in attack as Southgate looked to his bench again, bringing on Mason Mount in place of Conor Gallagher.

Southgate needed the calvary; it was developing into one of those nights. Phil Foden, recovered from a bout of Covid, was next on the field.

But it didn’t make a blind bit of difference as Hungary ripped England to shreds.

Phillips was lax in possession and paid the piper; Martin Adam robbing the Leeds midfielder before setting up Sallai for his second.

The Hungary bench were in hysterics, most of them storming the pitch to celebrate – shades of their famous 6-3 win over England

The home support were just as animated, as jeers echoed round Molineux for the second time. 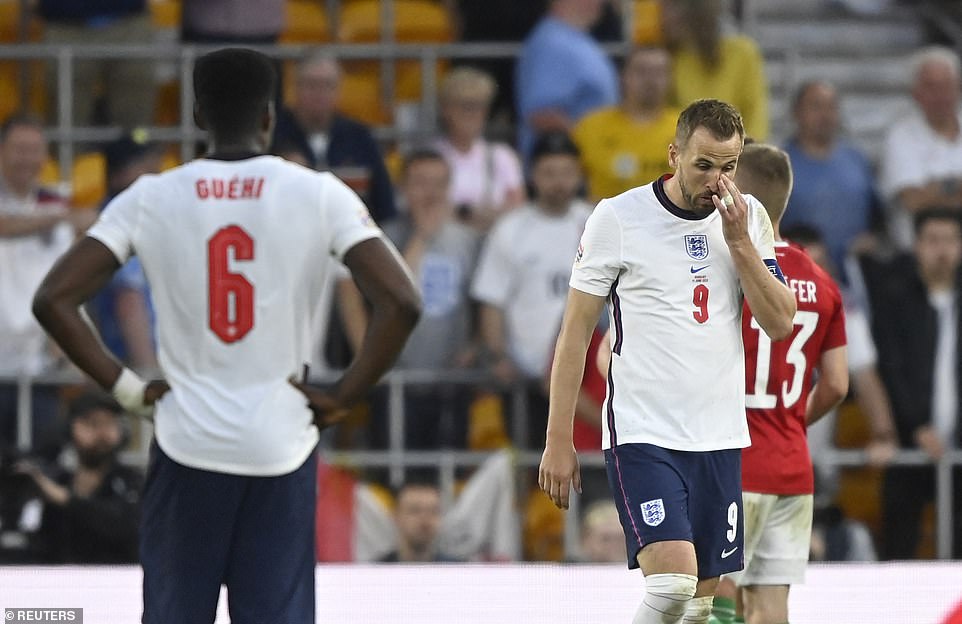 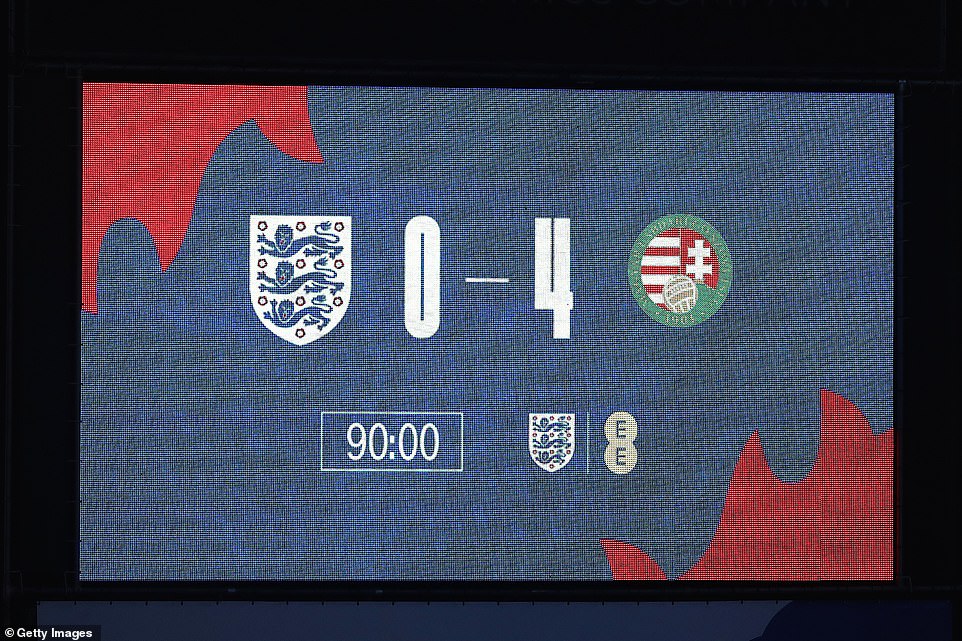 The audible discontent continued well after the goal, too. This wasn’t what the city of Wolverhampton had expected when they heard the country’s elite were coming to town.

Because this was turgid, dreadful, feeble.

It almost went unnoticed that Stones was sent off in between the two late Hungarian goals – but the damage was done by that point.

Time to prove them wrong, Gareth.