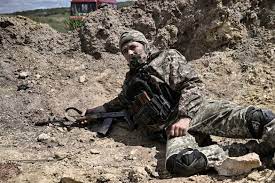 The intense battle for Sievierodonetsk will be remembered as one of the “most brutal” Europe has ever seen and is taking a “terrifying” toll on Ukraine, Volodymyr Zelenskiy said on Monday evening, as Russian forces move closer to capturing the strategic eastern city.

Ukraine’s president made the comment during his nightly address to the nation, noting the fighting was having a severe effect on civilians and his country’s military:

The human cost of this battle is very high for us. It is simply terrifying.

The battle for the Donbas will without doubt be remembered in military history as one of the most violent battles in Europe.

Zelenskiy, who has expressed fears of losing support from the west as the conflict drags on, repeated earlier pleas for more and heavier military weapons from allies including the US and UK:

We are dealing with absolute evil. And we have no choice but to move forward and free our territory.

We draw the attention of our partners on a daily basis to the fact that only a sufficient number of modern artillery for Ukraine will ensure our advantage and finally the end of Russian torture of the Ukrainian Donbas.

Zelenskiy reiterated Ukraine’s desire to free its entire territory and “drive the occupiers out of all our regions”.

Although now the width of our front is already more than 2,500km, it is felt that the strategic initiative is still ours.”

Lithuania to buy howitzers from France