SpaceX is set to launch a Falcon 9 booster today 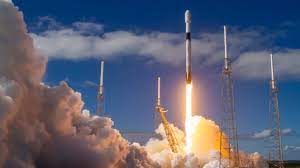 Elon Musk’s SpaceX is eyeing a new record as it readies a Falcon 9 for its 13th flight – the most times a Falcon 9 has been re-used.

The rocket is scheduled to take off at 12:08pm ET from NASA’s Kennedy Space Center in Florida on a mission to deliver 53 new Starlink internet satellites to low Earth orbit.

Scroll down for videos 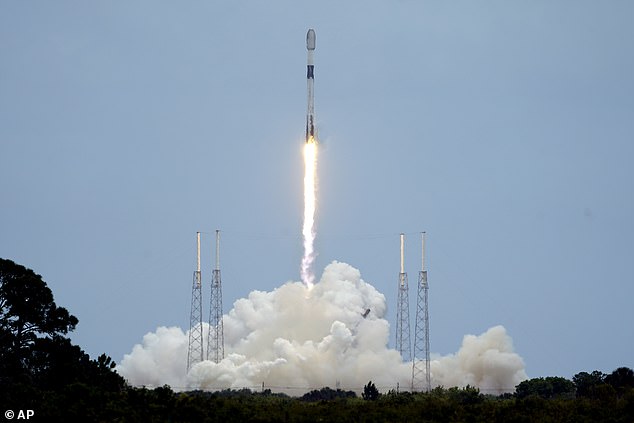 Elon Musk’s SpaceX is eyeing a new record as it readies a Falcon 9 for its 13th flight – the most times a Falcon 9 has been re-used. Pictured is the rocket’s 12th flight in April

The Falcon 9 rocket is set to take off from Pad 39A and travel to an orbit between 144 miles and 209 miles above Earth’s surface where the 53 Starlinks will be released – deployment of the satellites is expected to happen about 15 minutes after liftoff, according to SpaceFlightNow.

B1060’s last mission was in April, when it also took a batch of 53 Starlinks to orbit that brought the total number of satellites launched to more than 2,300.

The completed Starlink constellation is expected to be in the tens of thousands, which will ultimately provide internet to the entire globe.

The ability to re-use the first-stage of its rockets helps SpaceX keep the cost per launch down, and makes them competitive against the older companies. 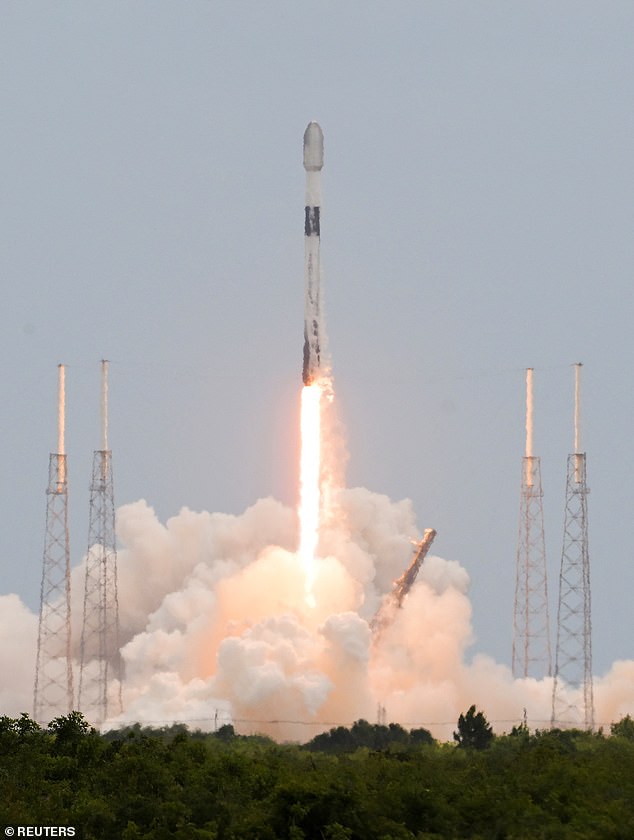 The rocket is scheduled to take off at 12:08pm ET from NASA’s Kennedy Space Center in Florida on a mission to deliver 53 new Starlink internet satellites to low Earth orbit. Pictured is the rocket’s 12th flight in April

This is also part of Musk’s plan of colonizing Mars – once SpaceX can master re-using a rocket, it can start sending multiple rockets to Mars and back to Earth.

Musk, however, plans to use the company’s massive Starship rockets to ferry humans to and from the Red Planet.

The CEO shared an animation earlier this week showing a Starship rocket spitting out Starlink satellites in space, just like the sweets in a Pez dispenser.

‘It’s the only thing that can carry the Starlink Two satellites,’ he said on a recent episode of Everyday Astronaut.

‘We’ve already produced the first, and we have on-site, the first Starlink Two and it’s seven meters long (23 feet).

‘[The] Falcon [9] has neither the volume nor the mass-to-orbit capability required for Starlink Two.

‘So even if we shrunk the Starlink Two down, the total upmass of Falcon is not nearly enough to do Starlink Two.’

While SpaceX awaits the first orbital launch of its Starship, the company is moving full speed ahead with the Falcon 9 rocket.

Not only will today set a new record, but it starts off a weekend for a trifecta of launches.

The company is preparing three missions in Florida and California, which will be the 24th, 25th and 26th launches conducted this year.

While SpaceX will be celebrating later, some of its employees were fired today due to a letter posted to the company’s internal communications system Wednesday that criticized Musk for his ‘embarrassing’ and ‘distracting’ tweets.

According to Reuters, at least five employees were let go.

The workers, who remain anonymous, demanded the firm’s directors ‘swiftly and explicitly separate’ from ‘Elon’s personal brand’ – and do so in just one month’s time.

The New York Times on Friday revealed that some of those employees were fired afterwards.

The newspaper said an email from Gwynne Shotwell, SpaceX President and COO, said employees involved with circulating the letter had been fired for making other staff feel “uncomfortable, intimidated and bullied, and/or angry because the letter pressured them to sign onto something that did not reflect their views”.

In an internal statement Shotwell said: ‘The letter, solicitations and general process made employees feel uncomfortable, intimidated and bullied, and/or angry because the letter pressured them to sign onto something that did not reflect their view.

‘We have too much critical work to accomplish and no need for this kind of overreaching activism.’

Staffers wrote that Musk tweets, especially in recent months, have ‘become a source of distraction and embarrassment’ for the company and wants the company to take action against its own CEO, claiming his tweets will eventually harm SpaceX’s reputation.

‘Elon’s behavior in the public sphere is a frequent source of distraction and embarrassment for us, particularly in recent weeks,’ the letter, viewed and first reported by The Verge, reads.

‘As our CEO and most prominent spokesperson, Elon is seen as the face of SpaceX — every Tweet that Elon sends is a de facto public statement by the company.’

Elon Musk’s SpaceX has launched more than 2,000 of its ‘Starlink’ space internet satellites into orbit and hopes to have 12,000 in the sky by 2026.

While satellite internet has been around for a while, it has suffered from high latency and unreliable connections.

Starlink is different. SpaceX said its goal is to provide high-speed, cable-like internet all over the world.

Musk has previously said the venture could give three billion people who currently do not have access to the internet a cheap way of getting online.

It could also help fund a future city on Mars.

Helping humanity reach the red planet is one of Musk’s long-stated aims and was what inspired him to start SpaceX.

Musk’s rival Jeff Bezos, the founder of Amazon, also plans to launch a constellation of low Earth-orbit satellites to provide broadband access to remote areas, as part of its Project Kuiper.

However, astronomers have raised concerns about the light pollution and other interference cased by these satellite constellations.