British mother, 32, who’s engaged to a US prisoner serving 40 years for murder 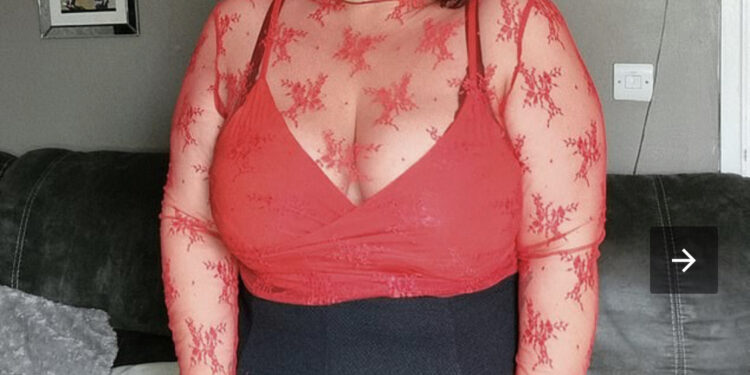 A British mother who has never met the fiancé she agreed to marry two months after first reading his ‘beautiful’ letters and poetry is planning their wedding next year 3,560 miles away in a US prison where he is serving between 20 and 40 years for his part in a brutal murder.

Laura O’Sullivan, 32, has known Terrell Ravon Reese, 31, since last October, when she used the JPay app for prisoners to find a pen pal – leading to a whirlwind romance.

Terrell was convicted for his part in the murder of Justin Solomon, 19, in Detroit, Michigan, on August 1, 2009.

The couple fell in love within weeks ‘meeting’ and are looking forward to their wedding, which is due to take place next year. 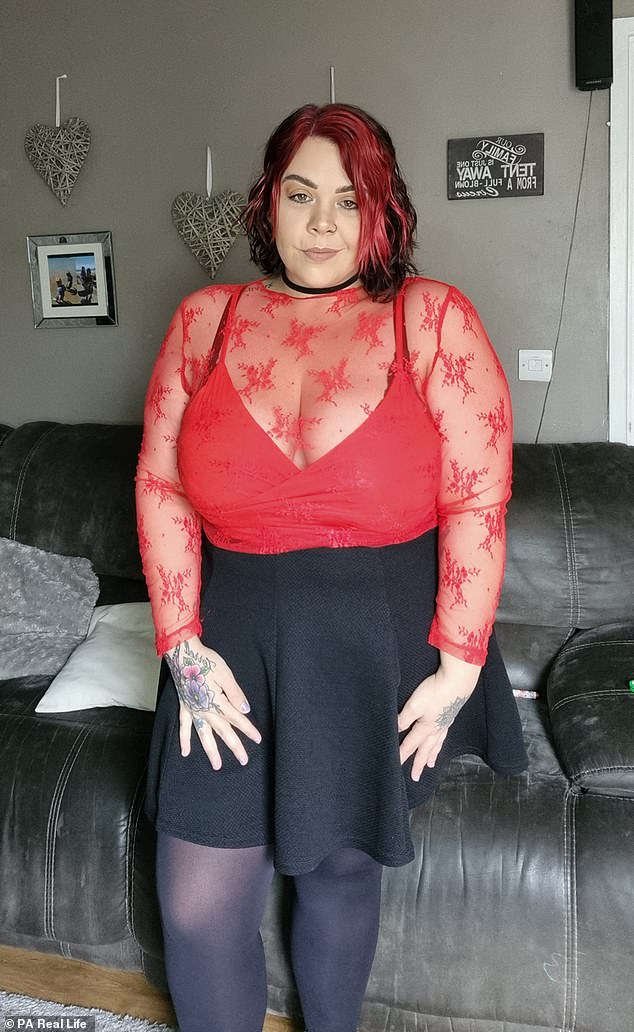 Laura O’Sullivan, 32, has known Terrell Ravon Reese, 31, since last October, when she used the JPay app for prisoners to find a pen pal – leading to a whirlwind romance 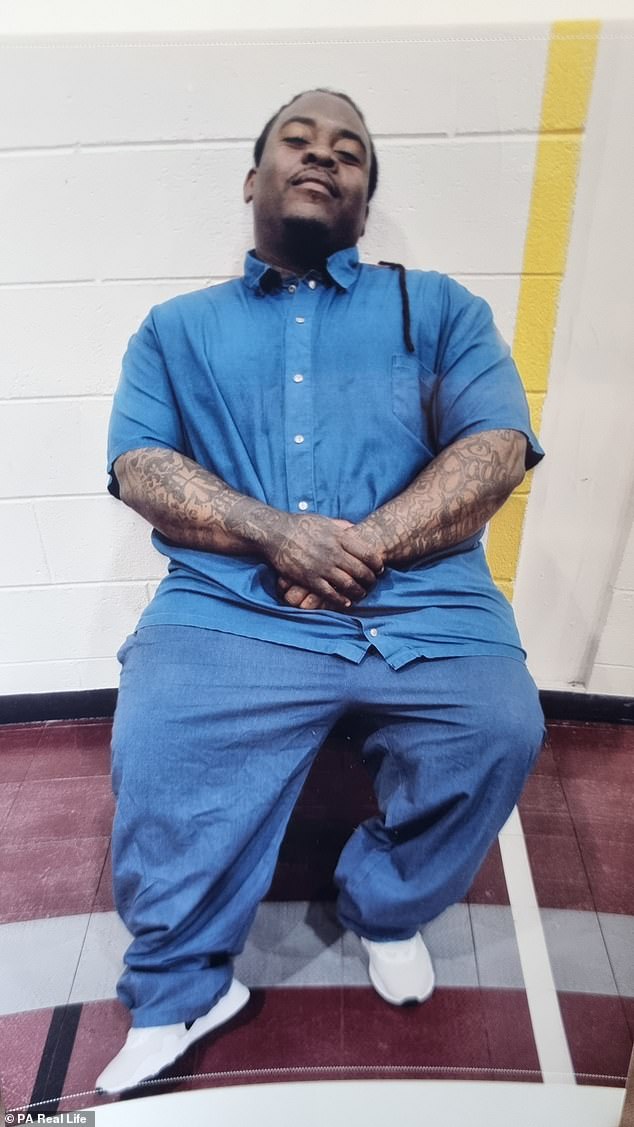 Terrell, who has served 12 out of his 20 to 40-year sentence, proposed to Laura with her mother and her sister’s blessing 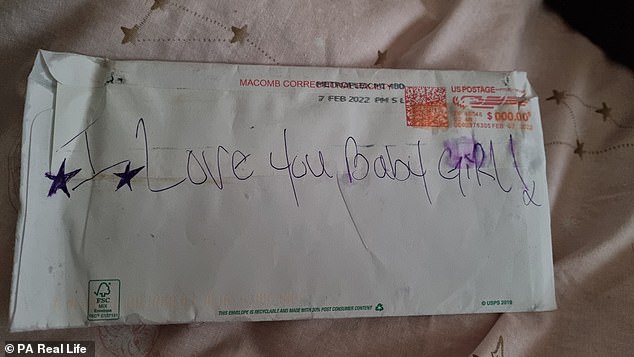 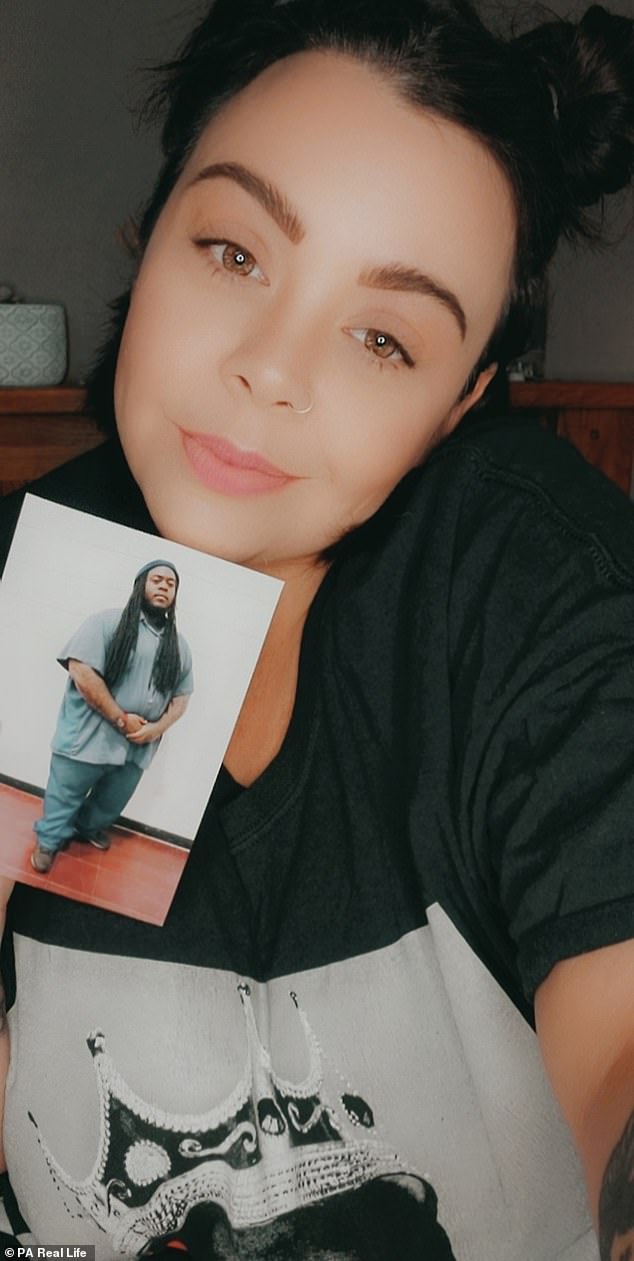 Laura at home with a picture of Terrell taken in prison. The mother-of-four said the prisoner is all she’s ‘ever wanted’

Thrilled when he proposed last December by phone from a Michigan jail, Laura, a single mum-of-four, of Bristol, said: ‘I thought it was friggin’ nuts, friggin’ crazy, but I couldn’t control my feelings and stop my heart.

‘He’s all I have ever wanted.’

Convicted for his part in the murder of Justin Solomon, 19, in Detroit, Michigan, on August 1, 2009, Terrell told the deceased he would sell him a car, but instead planned to rob him with another unidentified male.

Moments after Justin arrived with a friend, the other man appeared holding an AK-47, saying ‘Don’t nobody move,’ and repeatedly shot and killed him. 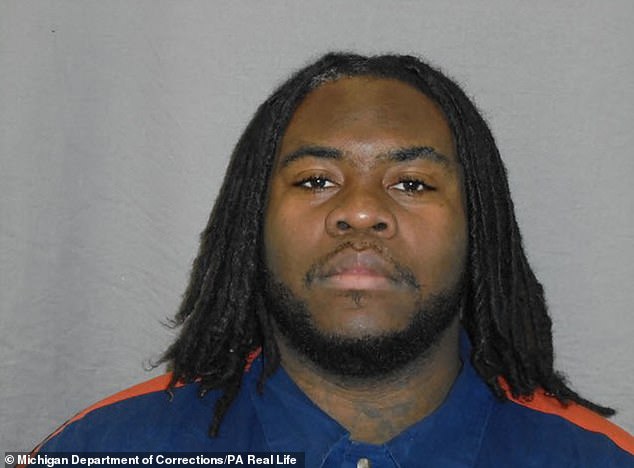 Terrell was convicted for his part in the murder of Justin Solomon, 19, in Detroit, Michigan, on August 1, 2009 and is serving 20 to 40 years behind barres 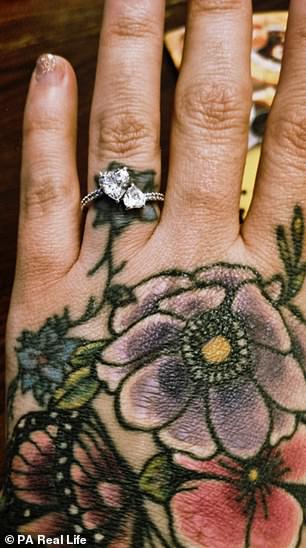 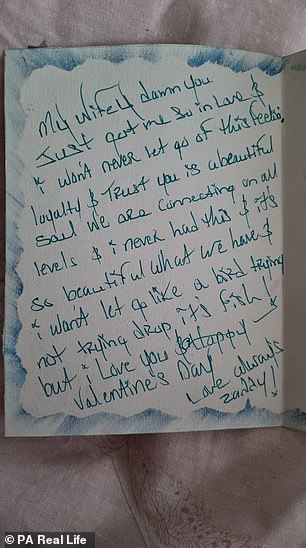 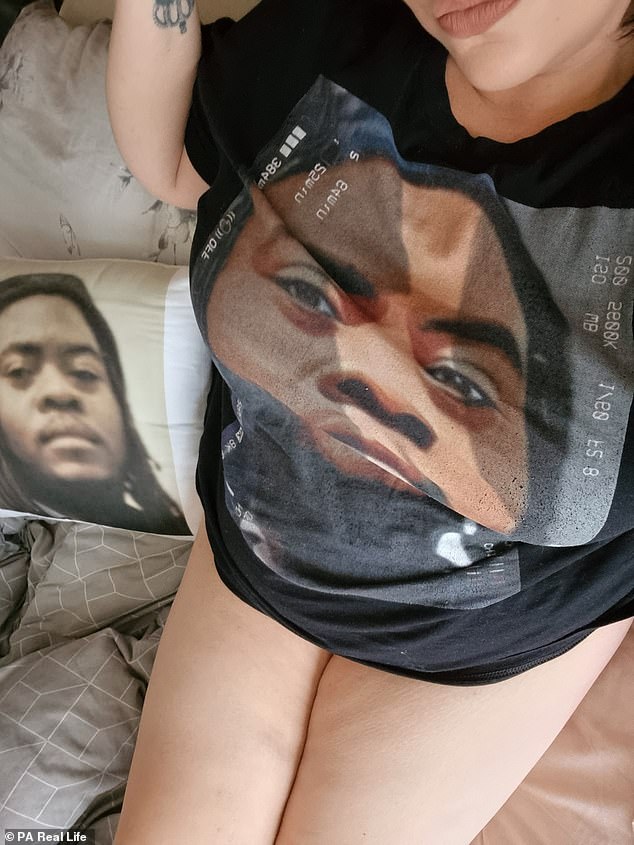 At home in Bristol, lovestruck Laura had printed Terrell’s face on her pillow and on a t-shirt she sleeps in 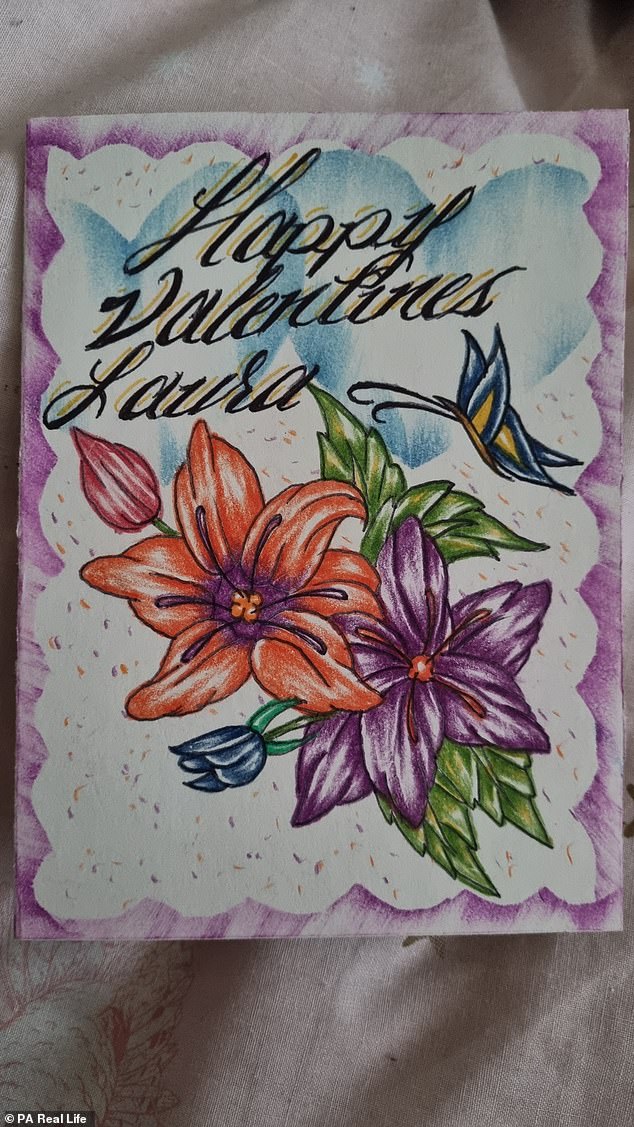 Terrell crafts beautiful cards he sends to Laura. The pair fell in love with each other within 17 days of meeting

Terrell, then 18, was caught after fleeing the scene and jailed, aged 19, for homicide, murder – second degree. The man who pulled the trigger was never convicted.

Laura, who is starting a baking business, was impressed by Terrell’s ‘honesty’ when he volunteered information about his crime.

She said: ‘My initial thought was like, “Sh**,” because it sounds so bad.

‘But he didn’t pull the trigger. He was young and stupid, in the wrong place at the wrong time and it got him imprisoned for most of his life.’

More than a decade on from the incident, Laura says Terrell is a very different man to the teenager he was on that day. 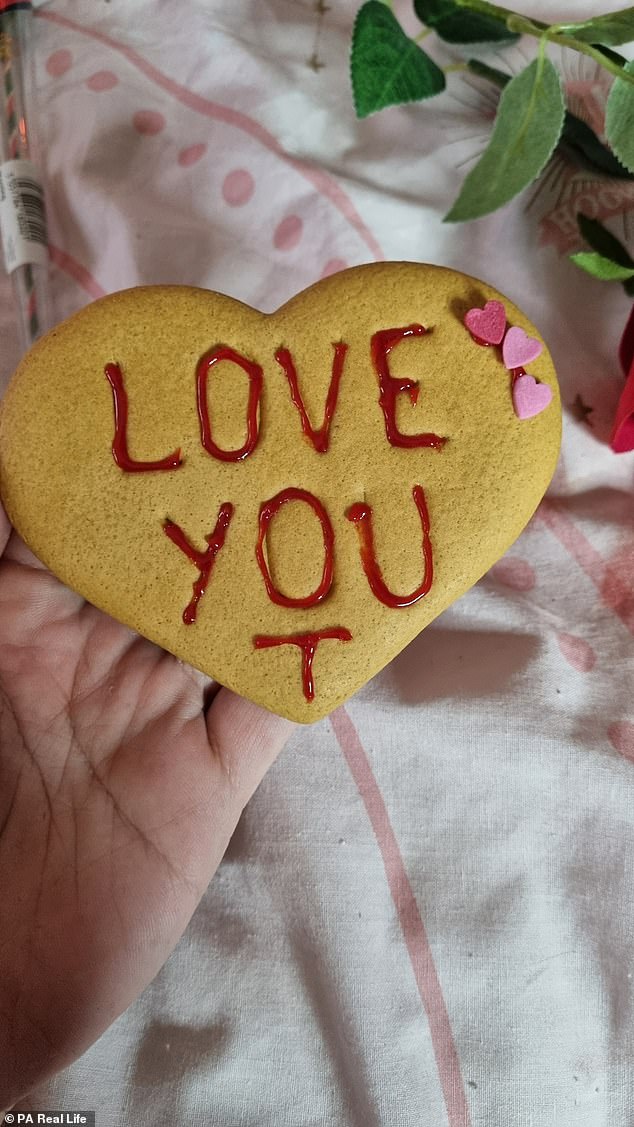 In spite of being thousands miles apart, Laura has baked cookies reading ‘Love you T’ for her fiancé 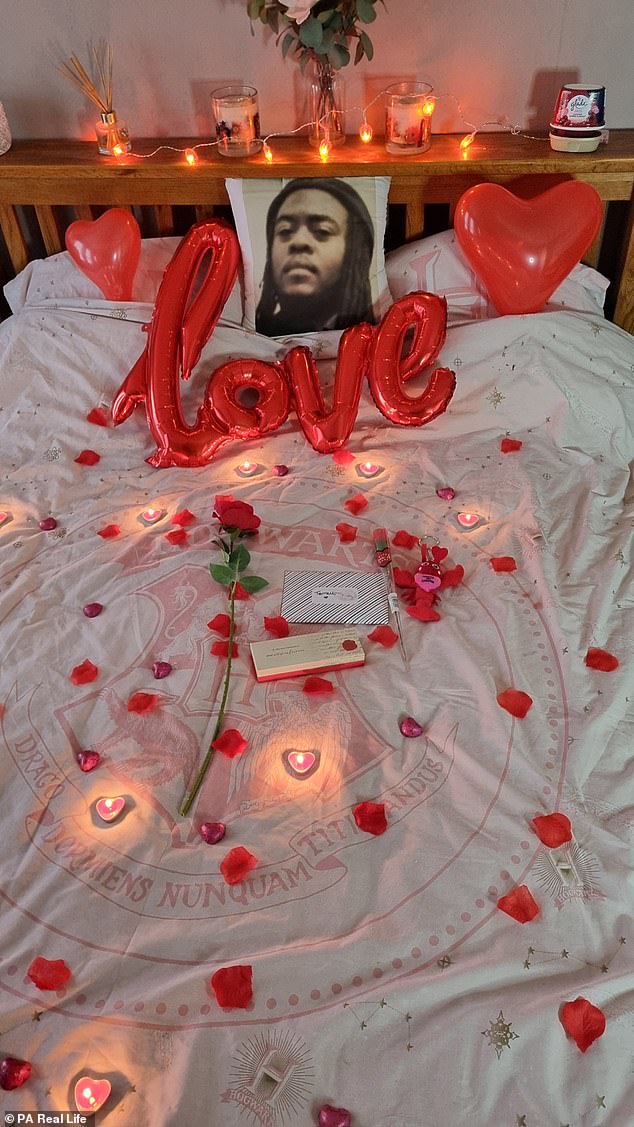 To make their Valentine’s Day special, Laura decorated her room with rose petals and a Terrell pillow, as well as a balloon reading ‘love’

She said: ‘Terrell was caught up in a lot of stuff,

‘He does regret that he didn’t have more of a voice and went along with stuff. He wishes he’d made better choices.

‘But he’s taken a lot of classes in prison. He goes to church, he has learnt sign language – he has taught himself a lot for someone thrown in prison as a teenager.’

Despite the gravity of his crime, Laura says Terrell is incredibly honest.

She said: ‘He told me what he had done straight away and I was so attracted to his honesty and openness.

‘Physically, looking at photos, the first thing I noticed was his beautiful eyes and dark, beautiful eyelashes, and his tattoos.’

A part-time carer for her eldest autistic son, Laura is awaiting background checks to be completed so she can go to the US for the first time to meet Terrell. 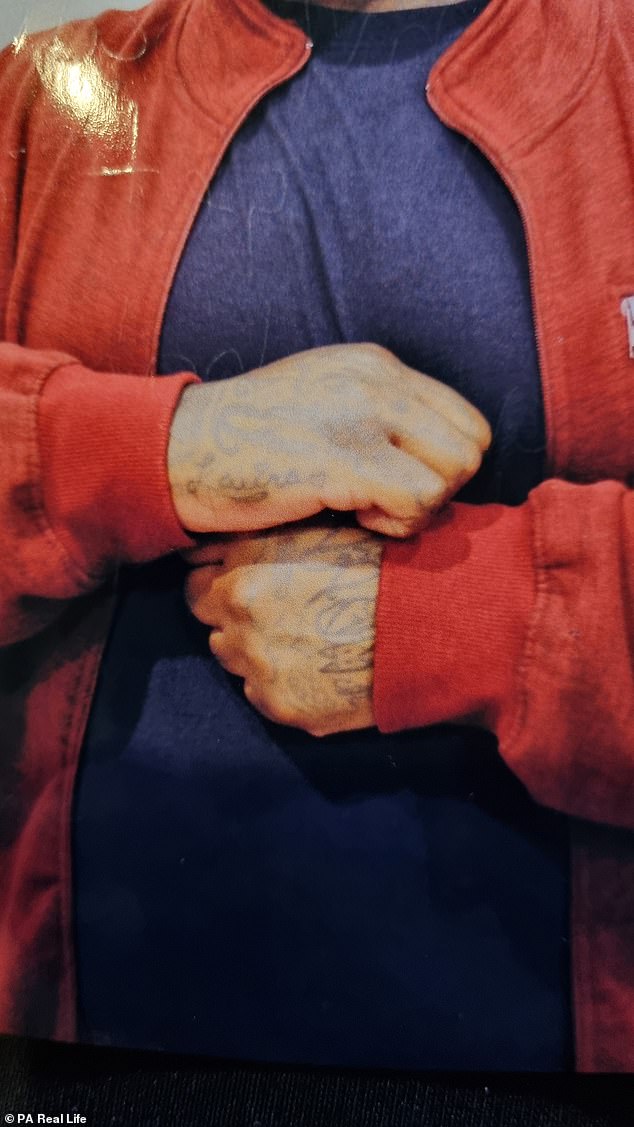 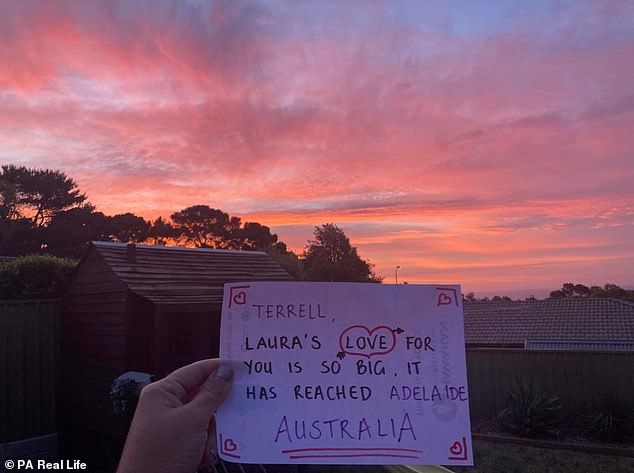 Laura enlisted the help of her friends around the globe to send Terrell tokens of her affection, pictured

Meanwhile, they have JPay conversations and daily 15 minute $2.50 (£2.07) phone calls – financed by his earnings as a prison shower porter.

She said: ‘We would call once or twice a day at first and then it would be 12 times a day.

‘He reads poetry he has written to me over the phone and I can hear the inmates laughing in the background, but he doesn’t care – he shouts back, “I’m reading to my wife”!’

After 17 days of speaking every day, Laura and Terrell said they loved each other and became officially boyfriend and girlfriend.

The couple have not met yet, but are waiting for Laura to complete her background check so she can come to the US 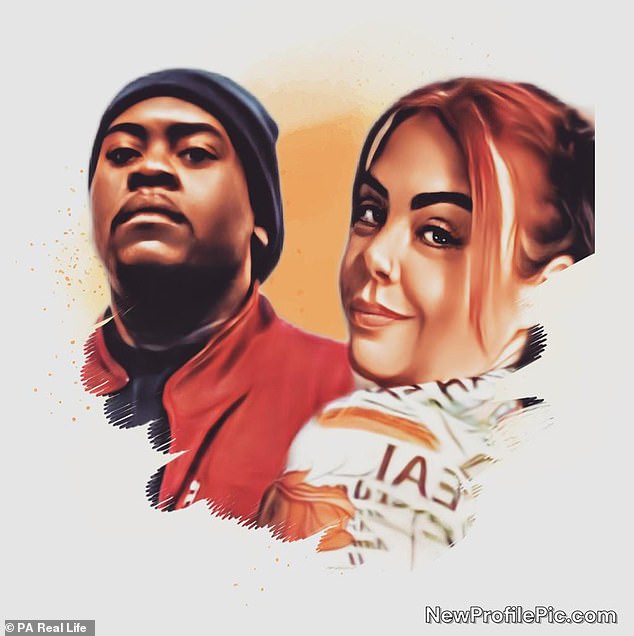 She said: ‘It’s been a crazy whirlwind.

‘I said I love you first but he said he wanted to say he loved me the week before.

‘I used to be one of those people who would read these stories and think, “There is no way you can love someone when you haven’t even met them.”

After losing her dad to Covid in January 2021 and getting over a bad break up, Laura said finding Terrell meant everything to her.

She said: ‘I was in such a bad place before. My emotions were all over the place.

‘But the way he comforted me, I just knew that this man was going to be with me for the rest of my life.’

Yet, she says meeting Terrell, who is not set for release until 2030 at the earliest, was pure chance, although he quickly won her heart with his “beautiful” words.

She said: ‘I was just scrolling on TikTok in October and spotted a video with the details of these men in prison to contact.

‘I had a gut instinct I wanted to talk to Terrell.’

As she has not had much luck in love before, Laura did not expect to make such an instant connection with anyone – especially not with someone in prison.

But, she was touched by his hand-written love letters and treasures the Valentine’s card he sent, saying: ‘My wife, damn you just got me so in love….I won’t let go like a bird trying not to drop its fish.’

While the couple can’t have real date nights, Laura has found other ways for them to enjoy each other’s company.

She said: ‘I set up my bedroom for Valentine’s and made his favourite drink, 1800s Tequila.

‘It tasted awful but I drank it for him and we listened to songs and sang together.

‘He likes a lot of R&B and love songs – our favourite is Stokley’s song SHE.

She also enjoys ‘phone sex’ with Terrell, which leaves her ‘more satisfied than being physical before with a whole man.’

She said: ‘We have phone sex which I was worried about at first, wondering who was listening, but now I don’t even think about it anymore.’ 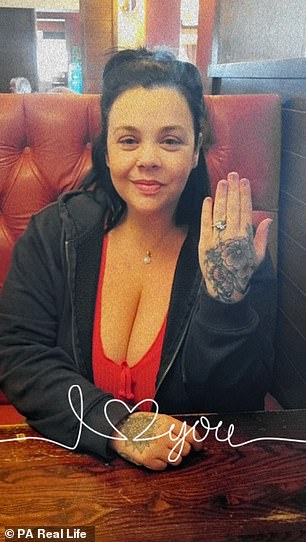 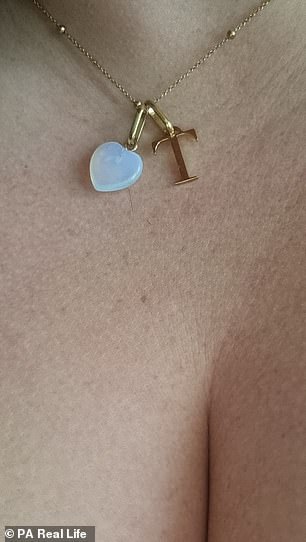 Laura showing off her ring, left. The mother also wears a necklace with a ‘T’ pendant for ‘Terrell’

Confined to his cell for 20 hours a day, he sent Laura a necklace for Christmas, with T for Terrell on it and an October Opal birth stone for the month they ‘met.’

Unable to send anything herself – other than a secure pack filled with $100 (£81) worth of food twice a year – Laura has recruited help from friends across the globe to show her love.

She said: ‘They write my message on a piece of paper for me and hold it up wherever they are to show how far my love has gone for him.’

And the couple have had each other’s names tattooed onto the side of their hands.

In April, Terrell made his marriage proposal ‘official’ by phoning when she was dining out with her mum and sister – who both support her relationship.

She said: ‘Terrell asked me to do him the honour of marrying him.

‘He asked me to turn around and I saw my sister with a box and a Pandora ring inside it.

And two weeks after their official engagement, Terrell sent across some of his earnings for Laura and her friends to enjoy celebratory drinks in the pub.

While Laura feels sadness for his victim’s family, she believes Terrell is paying for his crime.

But she admits not everyone supports their love, adding: ‘I get people on TikTok telling me I’m stupid, but they’re uneducated.

‘I was scared to tell my mum and sister about Terrell at first.

‘My mum was a bit worried, but now she is just happy that whoever this person is, they are making me happy, so she’s been quite supportive, as has my sister.’

Laura has also taken a lot of comfort from some members of the TikTok community, where she has found a number of #prisonwives sharing their experiences.

Once the court grants her a licence, Laura plans to marry Terrell in Michigan’s Ernest Brooks Correctional Facility common room next year, where their wedding breakfast will be limited to vending machine food.

She said: ‘I’ve read up a little about the wedding and I think you can wear a dress but it can’t be too revealing.

‘He isn’t allowed to dress up, so I will probably just go nice but casual with a nice top.

‘They do the ceremony in the day room in front of the other prisoners.

We’re only allowed to have me, Terrell, the vicar and one other guest he can choose.

‘We get a two hour visit but that’s it.

‘There is a vending machine in the room so we can get some hot food, like a burger or something, but that sounds awful so I don’t think we will do that.’ 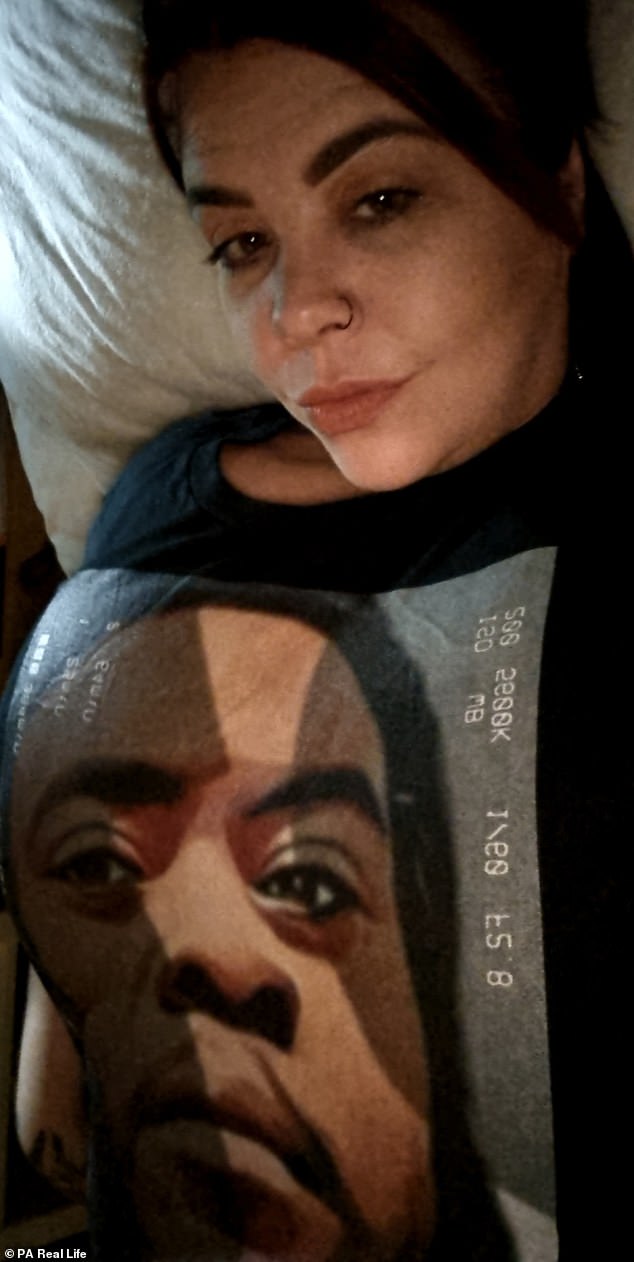 Mother-of-four Laura lounging in her Terrell t-shirt. She’s admitted the couple have had phone sex and that Terrell has read poetry to her over the phone 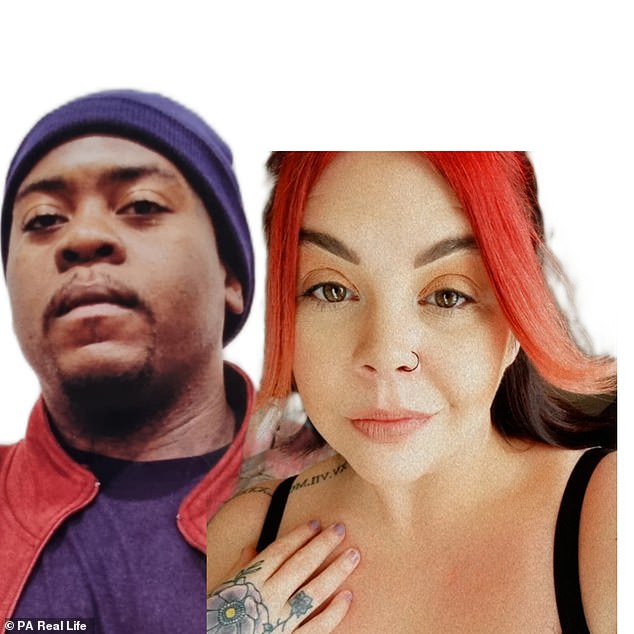 They will have a more intimate ceremony on his release – although that may be decades away.

In the meantime, Terrell spends 20 hours a day in his cell – with two hours given for exercise and two hours spent doing his prison job.

Laura said: ‘I have given up my whole life for a man I have never met.

‘I thought I’d be walking down an aisle, not marrying in a prison.

‘But my feelings are so strong, there is no option.

‘He is my best friend, my greatest supporter and I couldn’t ask for more.’

Speaking from prison, Terrell described Laura as ‘a beautiful woman.’

He said: ‘I will always respect her as the mother she is to four beautiful boys and she gives everything a man can ever ask for in life.