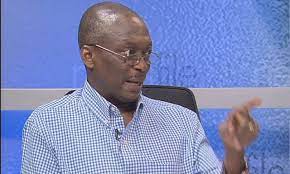 Editor-in-Chief of the New Crusading Guide, Abdul Malik Kweku Baako Jnr has revealed that popular architect Sir David Adjaye had duly been certified to practice in Ghana since 2018.

The architect and his outfit, Adjaye and Associates have recently been in the headlines for allegedly receiving huge sums from government regarding works they have been contracted to do on the National Cathedral Project.

MP for North Tongu Okudzeto Ablakwa has accused the architect and his firm of not having the requisite license to practice in Ghana, and most of the contracts awarded Adjaye and Associates, were via soul-sourcing and without Parliamentary approval.

Speaking on the matter on Metro Tv’s Goodmorning Ghana, Baako Jnr said he has evidence that Adjaye and his firm have been granted temporal licenses to operate in Ghana since 2018, and the authorization has been renewed through to 2021.

Sir Adjaye, in April 2022, was ‘formally’ registered to operate as an architect in Ghana following his induction as a registered licensed member of the Architect Registration Council (ARC).

As a result of the Monday April 25 event by the ARC, Adjaye and Associates, which is in charge of a number of national major national projects could practice as a licensed architect in Ghana.

“Prior to the induction event, Adjaye and his firm had been granted the relevant certificates by the GIA and ARC of Ghana. In other words, nothing he or his firm did prior to the full certification was illegal or irregular or both”, Baako Jnr added

“The annual licenses allowed him to practice legally to execute a specific project. I have been listening to Ablakwa and co on this angle of the controversy and apparently, they are either uninformed or ill-informed or both”

The National Cathedral Project has received a lot of public flak as a result of revelations that state funds are being used for the project, considering it is a personal promise of the president to God, amidst the grim economic issues bedeviling the country.

According to Okudzeto Ablakwa, almost GHC million of the tax payers money has so far been sunk into the project.

Meanwhile, works on the project have been stalled due to lack of funds.