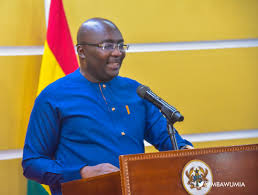 Former president John Agyakum Kufour has dispelled media rumours of his endorsement of the candidature of vice president Dr Mahamudu Bawumia to lead the New Patriotic Party (NPP) into the 2024 general elections.
The media specialisations are as result of President Kufour’s praise of Dr Bawumia’s dedication and loyalty to the party over the period;×at a Father’s Day event last Sunday.
Through a June 22, 2022communique, the Office of the former president revealed that the former president’s praise of Bawumia were nothing but apolitical thus it was unnecessary for the media to twist his comments.
The attention of the Office of Former President John Agyekum Kufuor has been drawn to erroneous reportage in some sections of the media, especially on social media, to the effect that President Kufuor has endorsed an aspiring candidate for the NPP flagbearership over several others who have expressed interest to contest in the race.

“The office wants to emphatically deny that any such endorsement took place on the said occasion and bemoan the fact that what transpired has been seriously misconstrued,” the statement signed by Dr. Kwabena Osei-Adubofour, a senior aide and spokesman read in part.
The statement while clarifying the reasons for eulogising the vice president, also admonished the party to ensure all candidates vying to lead the party into the 2024 elections have a level playing field.
The President believes that any of those mentioned, when selected by the party to be the flagbearer, would be able to discharge the work of the flagbearer very firmly and effectively.

It concluded that the contest when it is held should be “devoid of coercion and machinations so that the eventual selected nominee, coming out of the uncompromised freewill of voting delegates, can easily command the support and respect of all party faithful, and indeed, other Ghanaians sympathetic to our cause towards ‘breaking the eight.’
The NPP will be going to the polls soon to elect a flagbearer for the 2024 general elections. 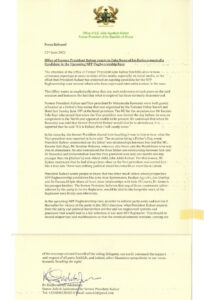