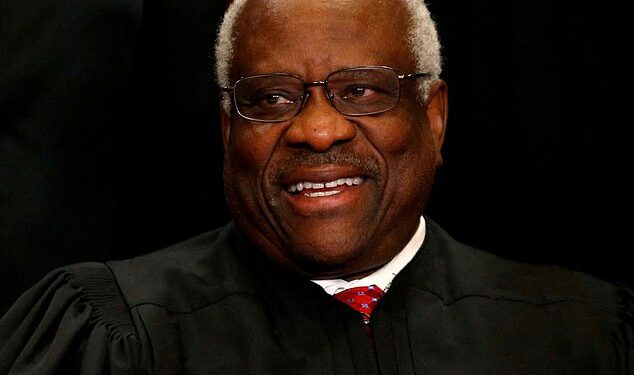 The prospective law changes, released in a concurring opinion of the decision penned by Thomas, would see limits put on gay marriage, same-sex sexual activity, and citizens’ access to birth control.

It comes as the Supreme Court controversially elected to strike down Roe v. Wade, a nearly 50 year-old decision that granted women the constitutional right to abortion. 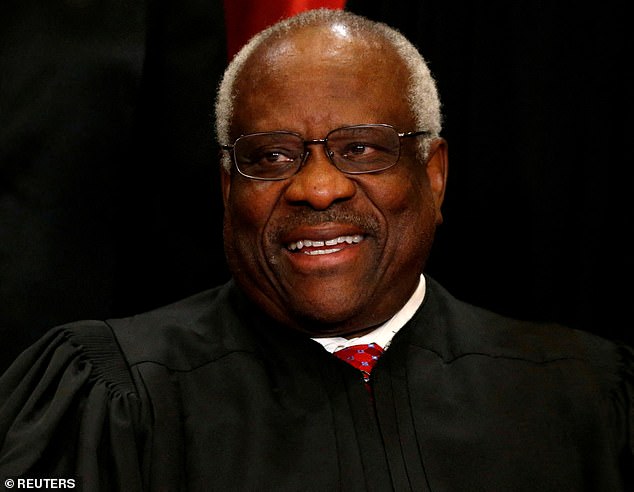 In his separate opinion also released Friday, Thomas – the court’s longest-serving justice – welcomed the guidance, but noted how it falls short of addressing citizens rights’ apart from abortion.

The 74-year-old justice, an appointee of President George H.W. Bush, went on to declare the court should reconsider other cases that fall under previous due process precedents.

Thomas’ argument was entrenched in the belief that since the Constitution’s Due Process Clause was found not to secure a right to an abortion in Friday’s ruling, the court should apply that same logic to other landmark cases.

He cited three in particular – including 1965’s Griswold v. Connecticut, which allowed for married couples to buy and use contraception, and 2015’s Obergefell v. Hodges, which allowed same-sex couples to legally marry. 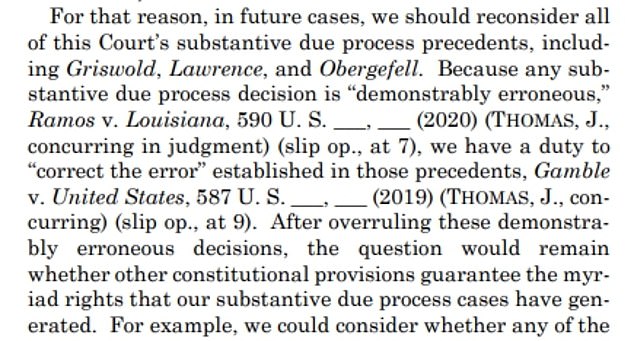 Thomas’ argument was entrenched in the belief that since the Constitution’s Due Process Clause was found not to secure a right to an abortion in Friday’s ruling, the court should apply that same logic to other landmark cases

Perhaps most shockingly, though, the jurist suggested the court also reexamine Lawrence v. Texas, a 2003 judgement that ruled that nixed some states’ century-old criminal sanctions on citizens who committed sodomy.

All have to do with Americans’ fundamental privacy, due process, and equal protection rights – tenets also central to Fridays decision, Dobbs v. Jackson Women’s Health Organization.

‘For that reason,’ Thomas, 74, wrote,  ‘in future cases, we should reconsider all of this Court’s substantive due process precedents, including Griswold, Lawrence, and Obergefell.’

The justice, a known conservative, went on to declare that ‘we have a duty to ‘correct the error’ established in those precedents.’

The assertion from Thomas comes as members of the left had warned that such a ruling could lead to the reversal of other landmark cases, following Politco’s leak of an initial draft of the court’s decision in May.

On Friday, Biden also pointed out that three justices appointed by previous Trump -Neil Gorsuch, Brett Kavanaugh and Amy Coney Barrett – were central to the overturning of Roe.