Eye: New implant to treat Glaucoma and cataract at the same time with no risk

in Health
Reading Time: 6 mins read
A A
0 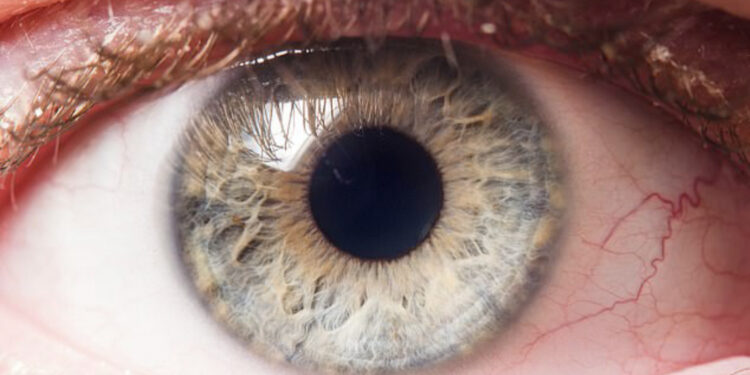 Glaucoma, which is caused by a fluid build-up in the eye, can lead to irreversible sight loss.

Roger Pledge, 76, from Colchester, Essex, was the first in the UK to have a new type of implant fitted in both eyes to combat it, as he tells Adrian Monti.

New study shows that glaucoma at risk for developing Alzheimer

Five years ago, I was shocked to discover I had glaucoma. There were no symptoms, but it was picked up during the annual eye screening I have for type 2 diabetes, a condition that was diagnosed 20 years ago.

Glaucoma can make you blind because the fluid build-up puts pressure on the optic nerve. My optician said using daily drops (travoprost) could reduce the pressure, but that if it became too high then I might need surgery.

Over time, the pressure in both eyes gradually rose. Then, late last year, tests showed my eyesight was deteriorating, so my optician referred me to a consultant at Colchester Hospital eye clinic.

By then, I was struggling to identify colours or read the paper, so I wasn’t surprised when he told me I’d need an operation to reduce the pressure.

This involves creating a new drainage channel in the eye, enabling fluid to drain away. But the consultant thought I was suitable for a new type of surgery to insert a tiny silicone implant in the corner of my eye, which allows excess fluid to drain via a different route. 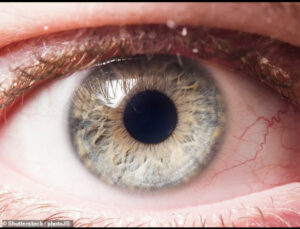 It was very new, but sounded worth trying, and he said he’d also operate on my cataracts [where the lens becomes cloudy].

I had the operation on my right eye — the eye with the most advanced glaucoma — under local anaesthetic in March, and went home later that day with a protective eye shield to wear for the first 24 hours. I had to use antibiotic eye drops for ten days and anti-inflammatory eye drops for eight weeks.

Gradually, the sight in my right eye improved. At a follow-up appointment two weeks later, I could read a few lines lower down the chart with my right eye alone compared with what I’d previously read while wearing my glasses. I could also see colours more clearly again.

In May, I had the same operation on my left eye and now, just seven weeks later, my sight is already better. At my recent check-up, the pressure in both eyes was in an acceptable range. I still need reading glasses for tiny writing but not my varifocals, nor my travoprost eye drops.

I’m looking forward to returning to driving and taking my wife Barbara out shopping and seeing more of our family, including our three great-grandchildren.

Glaucoma occurs when the optic nerve, which transfers visual information from the back of the eye to the brain, becomes damaged as the fluid (aqueous humour) that keeps the eye healthy becomes trapped.

Around 680,000 people in the UK have primary open angle glaucoma, the most common type, which becomes more prevalent with age and a family history of the condition.

Normally, this watery fluid drains away through a network of tiny channels, called the trabecular meshwork. But with open angle glaucoma, this network can become clogged with deposits of dead cells and proteins — we don’t completely understand why.

As a result, fluid doesn’t drain away as it should, causing pressure to build inside the eye and squeezing the optic nerve.

The condition is normally picked up during routine optician appointments. Early signs are detected by measuring internal eye pressure and checking peripheral vision. 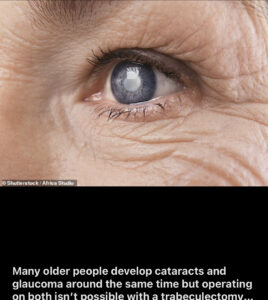 This type of glaucoma develops very slowly. Initial changes are subtle, and once someone notices problems, it can be far advanced and irreversible. One clue can be changes to colour perception, due to damage to the photosensitive cells at the back of the eye.

Pressure is eased with eye drops that either reduce the production of fluid inside the eye or enhance the outflow of fluid from the eye. But these can stop being effective as the disease progresses.

Another treatment is selective laser trabeculoplasty. This involves firing a low-energy laser beam at specific cells in the trabecular meshwork, causing the meshwork to rebuild so fluid can easily drain again.

In advanced cases, we perform a trabeculectomy — creating a new artificial drainage channel in the white of the eye, with a small trapdoor above it, called a ‘bleb’, to let fluid drain.

But this is a complicated procedure, and if one step goes wrong, it won’t work.

Now there is a new type of surgery, micro-invasive glaucoma surgery, where we insert an implant, called MINIject, to lower eye pressure.

The implant, 5mm-long and 0.6mm-thick, is made from a flexible medical-grade silicone with thousands of tiny holes that allow the aqueous humour to flow freely.

The implant allows the excess fluid to drain away — there’s no need to create new channels, as with the trabeculectomy; instead the implant redirects the fluid to another existing drainage network in the eye called the supraciliary and suprachoroidal space.

The implant can be put in place under a local anaesthetic.

Roger was the first UK patient to have MINIject in both eyes.
It can be done as a standalone procedure or alongside cataract surgery. Many older people develop cataracts and glaucoma around the same time but operating on both isn’t possible with a trabeculectomy due to the risk of inflammation when removing the cloudy lens.

The surgery takes under 30 minutes. Using a specialised microsurgery knife, I cut through the limbus, where the cornea [the clear outer layer of the eye] meets the sclera [the white of the eye] and insert a thin sheath containing the implant. Once in place, the implant is released and the sheath withdrawn.

We hope the procedure will be effective for around ten years, but only time will tell.

This implant works best for patients, like Roger, with early to moderate open angle glaucoma.

This procedure is available at a few other UK hospitals including in London, Edinburgh, Guildford and Manchester.

Can you run up stairs?

I can, but I don’t like running down, I prefer to walk briskly — it’s safer. In my youth I was a gymnast, but in later years Pilates took over. It strengthens you and makes you feel great.

Get your five a day?

I love salads and vegetables and rarely eat red meat. I have coffee for breakfast, a light lunch of salad or eggs and allow a 12-hour gap between dinner at night and my next meal.

All my life. As a teenager, I drove my mother mad when I decided I’d eat only what I’d scavenged in the wild, such as dandelion leaves. I am just under 5ft 6in — I was two inches taller but have shrunk. I used to be the tallest in school, but now I look up at people. I aim to be 9 st 9lb but hover between 9 st 10lb and 10 st. 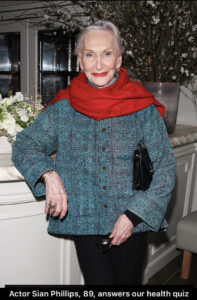 How has the pandemic affected you?

Apart from one horrible fortnight, when my youngest daughter Pat was in hospital with Covid, I had a great time. I read a lot, did Pilates, studied Welsh online and went for walks.

I don’t drink, I don’t smoke — I quit 40 years ago after a trip to a hypnotist. My weakness is sugar. Because of food rationing after the war, I didn’t eat sweets at all. Now I could consume huge quantities if I allowed myself to.

My father died in his 60s from various problems, probably linked to childhood tuberculosis. My mother’s family was long-lived. She even took up smoking again aged almost 80 — having stopped for years — and died from lung cancer at 85.

Shingles. I had it 12 years ago when I was in Calendar Girls in the West End and it was torture. As a child, I had scarlet fever twice. And, once, I collapsed in the road with a burst appendix and was rushed to hospital.

Ever have plastic surgery?

No, but when I was in my early 20s I had reconstructive surgery on my face after I was in a car accident and went through the windscreen. Now I have Botox every six months to smooth a scar between my eyebrows.

I can put up with a fair amount. After the car accident, for example, I was in pain but I didn’t stop working.

I don’t get depressed in the clinical sense. I sometimes feel low, but I take a walk and soon cheer up.

Never drunk enough to find out.

What keeps you awake at night?

Not much. Before I can think of a worry, sleep overtakes me.