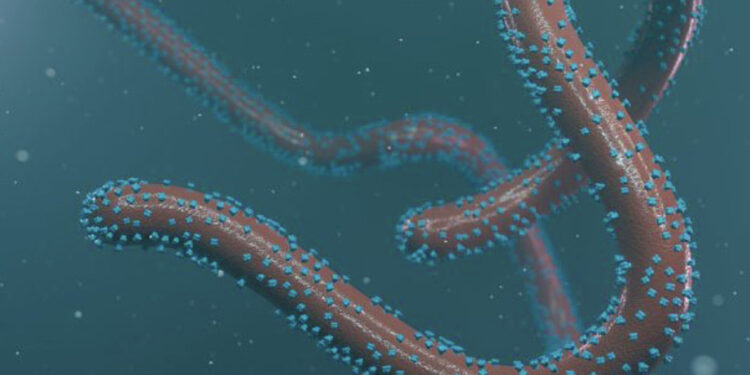 The Ghana Health Service (GHS) has announced the confirmation of Marburg Virus Disease (MVD) in some parts of the country.
The confirmation follows further testing at the Institute Pasteur in Dakar (IP), Senegal, which corroborated the results from the Noguchi Memorial Institute for Medical Research in Ghana.
On July 7, 2022, the GHS sent samples to IPD with the support of the World Health Organisation (WHO) for validation in line with standard practice, this being the first time Ghana has confirmed Marburg Virus Disease.
“The disease was suspected following the identification of two persons who met the case definition for an Acute Haemorrhagic Fever and reported in Adansi North District of Ashanti Region,” a statement from the Ghana Health Service signed by the Director General, Dr. Patrick Kuma-Aboagye said.
It indicated that since the recording of the two cases, some 98 contacts have been identified including individuals from Sawla-Tuna-Kalba district from Savannah Region.
The contacts, the GHS said, are currently under quarantine and being monitored by the Ashanti and Savannah Regional Health Directorates of the GHS.
It also indicated that no new cases of MVD have been identified.
MVD
Marburg Virus Disease is a rare but severe haemorrhagic fever that affects both humans and non-human primates.
Fruit bats are natural hosts of Marburg virus.
The Marburg virus is transmitted to people from animals and spreads among humans through human-to-human transmission from direct contact with body fluids, blood and other discharges from the affected person/animal.
The incubation period for the disease is two to twenty- one days.
Treatment is symptomatic.
Persons with MVD may present with symptoms such a fever, bloody diarrhoea, bleeding from gums, bleeding into the skin, bleeding into eyes and bloody urine.
According to the GHS, there is currently no vaccine available.
It advised the public to thoroughly cook animal products (blood and meat) before consumption.
“The public is therefore advised to avoid contact with such animals …direct contact with persons showing the symptoms indicated above and to encourage such persons to report to the nearest health facility for appropriate assessment,” the statement said.
Mitigation Measures
The GHS indicated that together with partners including the Wildlife Department, at the onset of suspicion, initiated measures to reduce any risk of spread.
These measures included the isolation of all identified contacts including doctors and other healthcare workers.
“Following the confirmation of the cases, contact tracing has been expanded with the identification of more contacts being followed up for the maximum incubation period of 21 days. A reasonable number of contacts have been followed up for 19 days with none developing any symptoms.
“In addition, 13 of the contacts were randomly selected and tested at the Noguchi Memorial Institute for Medical Research. All 13 contacts tested negative for Marburg Virus,” it said.
The GHS further assured that it is continuing with response measures to prevent any further cases while working with all relevant bodies to ensure that no case is missed by the health sector.
“Community activities are being strengthened with the engagement of community-based surveillance volunteers who serve as eyes on the ground for the health system and who will report any unusual occurrences to the Ghana Health Service for further action.
“The necessary additional logistics including Personal Protective Equipment have been sent to the affected districts should the need arise,” it added. 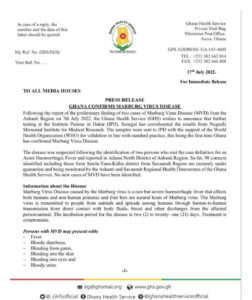