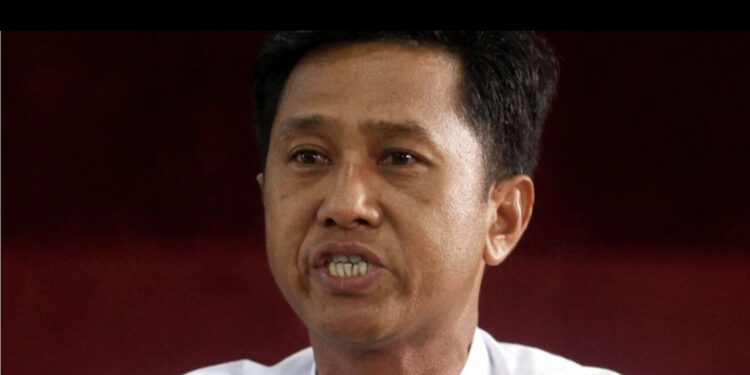 Myanmar’s junta has executed four prisoners, including a former lawmaker from Aung San Suu Kyi’s party, according to state media, in the country’s first use of capital punishment in decades.

The four men, including former legislator Phyo Zeya Thaw and prominent democracy activist Kyaw Min Yu, known as Jimmy, had been sentenced to death in January in closed trials.

On Monday, the junta-controlled Global New Light of Myanmar said that the sentences had been carried out. The men had been accused of conspiring to commit terror acts, it said. Local media reported that the families of the men had travelled to Insein Prison, in Yangon, demanding to see their loved one’s bodies

Aung Myo Min, human rights minister of the National Unity Government (NUG), which was formed by elected lawmakers, ethnic minority representatives and activists, said he was extremely saddened to hear of the executions. “What else do we need to prove how cruel the murderous Myanmar’s military is?”, he said.

Many in Myanmar turned their social media profile pictures black and red, in a show of mourning.

Myanmar’s military junta seized power in a coup in February 2021, ousting the elected government of Aung San Suu Kyi, and has since unleashed a campaign of brutal violence to suppress opposition.

A total of 14,847 people have been arrested since the coup, while 11,759 remain in detention, according to the advocacy group Assistance Association for Political Prisoners (AAPP) Burma, which monitors arrests and killings.

The four men had tried to appeal, but their sentence was upheld in June. They were reportedly denied access to legal counselduring their appeal, in violation of international human rights law.

A source close to the family of Kyaw Min Yu told the Guardian that they had received confirmation from the deputy prison chief of Insein prison that the death penalty had been carried out. No information was provided about when the execution took place. The family is still demanding to see the body, they said.

Thazin Nyunt Aung, the wife of Phyo Zeyar Thaw, told Reuters she had not been informed of her husband’s execution.

Phyo Zeya Thaw, 41, was arrested in November when about 100 police and soldiers raided a housing complex in Yangon. Before entering politics, he was both an activist and rapper. In 2000, he released the country’s first rap album, having founded the hip-hop band, Acid. His lyrics, and their thinly veiled criticisms of the previous military regime, captured the anger and frustrations of a generation of young listeners.

Phyo Zeya Thaw was also an activist with the movement Generation Wave, which used art and coded protests to campaign against the previous regime. Like many of the group’s members, he was arrested and imprisoned. He went on to become a lower house MP in April 2012, the same year Aung San Suu Kyi

Kyaw Min Yu, 53, a veteran activist, was arrested in an overnight raid in October. He was a prominent leader of the 88 Generation Students Group, which led pro-democracy uprisings against the military, and was imprisoned in 1988 for his role in the protests. He was released in 2005, but jailed again from 2007 until 2012.

Kyaw Min Yu was also a writer, and while in prison translated works including Dan Brown’s The Da Vinci Code and Angels and Demons, and wrote the novel, The Moon in Inle Lake. His 2005 self-help book Making Friends was a bestseller, according to PEN International.

The two other executed men – Hla Myo Aung and Aung Thura Zaw – were accused of killing a woman they suspected was military informer in Yangon, according to AFP.

UN Special Rapporteur Thomas Andrews said he was “outraged and devastated” by the news. “My heart goes out to their families, friends and loved ones and indeed all the people in Myanmar who are victims of the junta’s escalating atrocities,” said Andrews.

“The widespread and systematic murders of protesters, indiscriminate attacks against entire villages, and now the exectuion of opposition leaders, demands an immediate and firm response by member states of the United Nations,” he said.

The junta-controlled Global New Light of Myanmar said on Monday the men had given “directives, made arrangements, and committed conspiracies for brutal and inhuman terror acts”.

“According to the relevant department, the punishment has been conducted under the prison’s procedures,” it said.

The junta gave no details on how the men were executed.