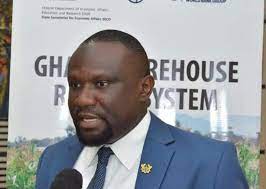 The Pusiga District Directorate of the Ghana Education Service (GES) has been petitioned to discard mock examination papers which have been embossed with the photograph of the Chief Executive Officer(CEO) of Buffer Stock Company Limited, Alhaji Abdul-Hannan Aludiba.

The Basic Education Certificate Examination (BECE) mock papers for students in the Pusiga District in the Upper East region were seen circulating on social media with a bold imprint of the personal photograph of the Buffer Stock CEO in a fashion likened to a biography.

The mock examination is reportedly sponsored by a foundation established by the New Patriotic Party stalwart as boldly inscribed on the interface of the examination paper ‘Fully Sponsored by Hon. Alhaji Hannan Foundation, Pusiga. UE/R’.

This move by Alhaji Hannan Aludiba has been widely condemned by social media users who have described the embossment of the photograph of the NPP financier as embarrassing and a desperate attempt to score political capital for his parliamentary ambitions.

A petition presented to the GES by a citizen of the area identified as Abugri Rashid said the decision to display the image of Alhaji Hannan Aludiba on mock examination papers for BECE candidates is in sharp contradiction with the basic rules of the Ghana Education Service.

“The children’s amendment act – act 2016 (act 937) prohibits the usage of children by a person or group to derive favors – be it financial, sexual or political,” the petition said.

Akugri Rashid further accused the Buffer Stock CEO of being “Interested in his personal advertisement rather than behaving as a sponsor. He could have done this without necessarily embossing his pictures on it”.

The petitioner further stated that “The district Assembly through the District Chief Executive could have sponsored this mock exam without persons taking us for granted and using the schools for their personal fantasy and popularity.

Alhaji Abdul Hannan is the current Chief Executive officer of the National Buffer Food Stock Company who could have to use the company name which is a state enterprise to sponsor these activities if indeed he really has the people and our future leaders at heart.

I’m yet to be told the reason behind this personal advertisement using the Education Service in the District.

I, therefore humbly request your outfit to stop the usage of the photo-embossed examination papers in their current state”.

Meanwhile, reporters has gathered from sources within the New Patriotic Party in the Upper East Region that the aggressive promotion and marketing of the CEO forms part of efforts aimed at presenting him as the ultimate parliamentary candidate for the party for the Pusiga Constituency in the 2024 parliamentary elections.