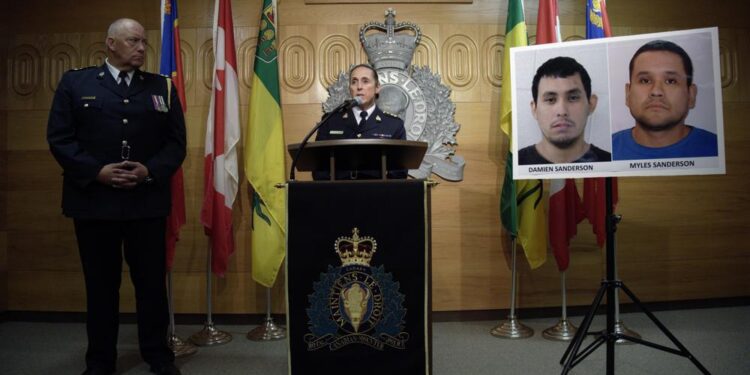 A manhunt was underway in western Canada on Sunday night as police searched frantically for two men suspected in a series of stabbings that have killed 10 people and wounded at least 15 others.

The bulk of the attacks targeted residents of James Smith Cree Nation, an Indigenous community of 3,400, with other injuries reported in the neighbouring village of Weldon, north-east of Saskatoon.

The attacks in the province of Saskatchewan have shocked the country. Canadian prime minister Justin Trudeau described them as “horrific and heartbreaking. I’m thinking of those who have lost a loved one and of those who were injured.”

Trudeau said his government had been in direct communication with the James Smith Cree Nation community leadership and was ready to assist, adding: “Those responsible for today’s abhorrent attacks must be fully brought to justice.”

Rhonda Blackmore, the assistant commissioner of the Royal Canadian Mounted police (RCMP) in Saskatchewan, told reporters on Sunday evening that police believed some of the victims were targeted and others were attacked randomly.

“It’s horrific what has occurred in our province today,” she said.

Blackmore said the relationship between the suspects was unclear. She said there was no motive yet – but the men were presumed to be armed and dangerous.

Bobby Cameron, the chief of the Federation of Sovereign Indigenous Nations (FSIN), which represents First Nations groups in Saskatchewan, suggested the attacks may have been drug-related, saying: “Our hearts break for all those impacted. This is the destruction we face when harmful illegal drugs invade our communities.”

As the communities mourned, the identities of some of the victims emerged.

Residents identified one of the victims in the attacks as Wes Petterson. Ruby Works said the 77-year-old widower was like an uncle to her. Speaking to the Associated Press, she said: “He didn’t do anything. He didn’t deserve this. He was a good, kind hearted man.

She said the event has shaken a community where the sounds of sirens are rarely heard. “No one in this town is ever going to sleep again. They’re going to be terrified to open their door,” she said.

Two more victims have been identified as mother-of-two Lana Head and her partner. Head’s former partner Michael Brett Burns told local media APTN News that the couple died of their wounds on the James Smith Cree Nation. Burns described the community as being in mourning, adding that he spent Sunday evening at Melfort hospital comforting many family members.

Calvin Sanderson, one of the elected leaders of the three communities that make up the James Smith Cree Nation, has spoken of the impact the attacks have had on the close-knit community. He told Associated Press: “Everyone’s been affected … They were our relatives, friends. Mostly we’re all related here, so it’s pretty hard … It’s pretty horrific.”

Police began receiving reports early on Sunday morning from James Smith Cree Nation of a stabbing in the community. Within two hours, a dangerous persons alert was sent to residents in the area, asking them to shelter in place.

More alerts were sent as the scope of the attack, spread over at least 13 sites, became clearer.

The nation leadership declared a state of emergency “in response to the numerous murders and assaults on members of the James Smith Cree Nation”, and established two emergency operations centers, it said in a statement.

On social media, residents of James Smith Cree Nation chronicled the terror that gripped the community on Sunday morning. One posted an image of a broken door handle, adding that she was glad her younger sister wasn’t home when it was broken into.

“This is forever gonna traumatize me,” she wrote.

Others posted tributes to family members killed in the attack, including a young woman who had seen her grandfather the night before, only to learn he was a victim in the attacks.

Doreen Lees, an 89-year grandmother from Weldon, told the Associated Press she and her daughter spotted one of the suspects when a car came speeding down her street early in the morning, as her daughter was having coffee out on her deck. A man approached them and said he was hurt and needed help, said Lees.

But the man ran when her daughter said she would call for help.

“He wouldn’t show his face. He had a big jacket over his face. We asked his name and he kind of mumbled his name twice and we still couldn’t get it,” she said. “He said his face was injured so bad he couldn’t show it.”

She said the man was by himself and “kind of a little wobbly”.

“I followed him a little ways to see if he was going to be OK. My daughter said ‘Don’t follow him, get back here.’”

Saskatchewan premier Scott Moe called the attacks “horrific” and said he offered his government’s support to all those affected. “There are no words to adequately describe the pain and loss caused by this senseless violence. All of Saskatchewan grieves with the victims and their families.”

Throughout the day, the scope of the search expanded more than 300km (186 miles) south, towards Regina, the provincial capital, where thousands of fans were gathered for a sold-out Canadian Football League game between the Saskatchewan Roughriders and the Winnipeg Blue Bombers.

The men had initially been spotted driving a stolen black Nissan Rogue but police warned they did not know if the pair had changed their vehicle. . The RCMP had no indication they had left the province, but alerts were also issued in neighbouring Alberta and Manitoba. 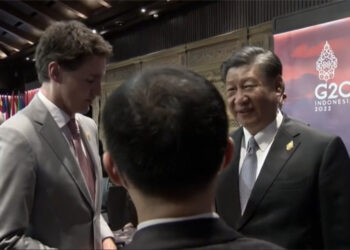 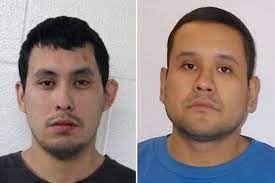