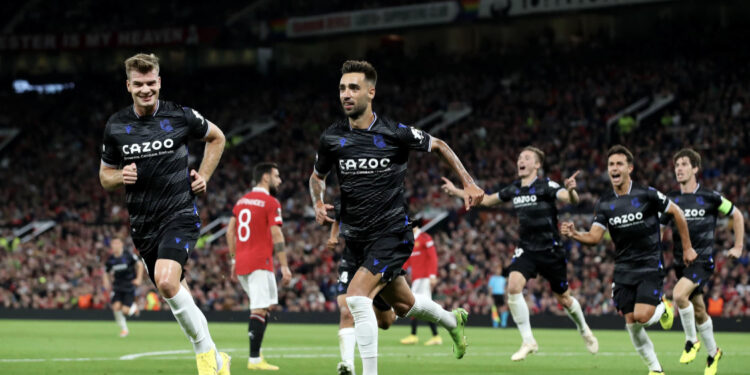 Football was an obvious irrelevance after the evening’s news but, once Uefa ruled the game should go ahead, Manchester United duly fulfilled their Europa League fixture against Real Sociedad.

The death of Queen Elizabeth II threw a veil of sorrow over Old Trafford and a heartfelt tribute before kick-off brought those present together in a minute’s silence in respect to the monarch. The players and officials wore black armbands, the flags over the stadium flew at half-mast, pitch-side advertising hoardings were turned off, and United issued a statement that offered condolences and gratitude for the monarch’s “immense contribution to public life”.

Once the game got under way, Erik ten Hag’s side ended with a first ever defeat to the Spanish club and first in five matches because of a controversial second-half Sociedad penalty, so United are already playing catch-up in the group stage.

A full-pelt charge by Antony that ranged from Sociedad territory to near his right corner flag and which closed down Takefusa Kubo was United’s highlight of a concerning opening half when defending. Their visitors were hardly more robust in the department as Alejandro Remiro’s drop of a high Casemiro ball – he bumped into Aritz Elustondo – signalled a similar shakiness from them.

Against opponents United eliminated at the last-32 stage two years ago Ten Hag had recalled Harry Maguire and Cristiano Ronaldo, while Victor Lindelöf made his first start of the season and Casemiro his first for the club. Sociedad had David Silva, arguably the finest footballer of Sheikh Mansour’s Manchester City ownership during a decade there, operating as a floating No 10 but it was United’s chief conductor, Christian Eriksen, who dominated before the break.

One pass from the classy Dane had Anthony Elanga haring along the left. Another was chipped at Ronaldo, who marginally failed to connect. When Eriksen fed Elanga again a burst took him past Andoni Gorosabel and a corner was claimed. When it was swung in, Diogo Dalot and Maguire each somehow missed testing Remiro from close range. Eriksen then engineered a bewitching dummy-then-tap to Ronaldo who cursed himself after failing to finish.

Imanol Alguacil’s side, though, posed their own questions of United’s flaky rearguard. Clearances from Lindelöf and Maguire did not convince and the nutmeg of Casemiro by the visiting left-back, Aihen Muñoz, in an advanced position was not part of the defensive shield’s job description.

For the second half Lisandro Martínez replaced Dalot and Bruno Fernandes was introduced for Eriksen. The Portuguese instantly hung up a ball for Ronaldo, usually lethal with his head, but he spurned a gilded chance to put United ahead. Moments later the 37-year-old, yet to score this season, blazed over from 20 yards.

United had not been this fragmented since their opening two defeats, appearing a unit still to be drilled in the Ten Hag way, not one that had claimed victory in their last four outings.

Alexander Sørloth, on as a substitute, should have punished the latest slipshod United defending but a wild header was no surprise given the quality thus far.

Now, though, came the questionable penalty decision from Marco Di Bello. Silva pulled the trigger and the ball struck Martínez on a leg then deflected on to an arm. VAR did not advise the referee to look again and Brais Méndez beat David de Gea to the latter’s left. In response Casemiro headed down but off target from a Fernandes cross as United continued to frustrate.

For the closing phase Ten Hag brought on Alejandro Garnacho and Jadon Sancho but still United lacked fluidity and were unable to track Sociedad’s runners. After Charlie McNeill was give a debut – in place of Tyrell Malacia – Sancho’s lack of composure from near-in when he should have equalised summed United up.

Yet if at the final whistle they had lost a football match, this was a sombre night on which the result really did not matter.