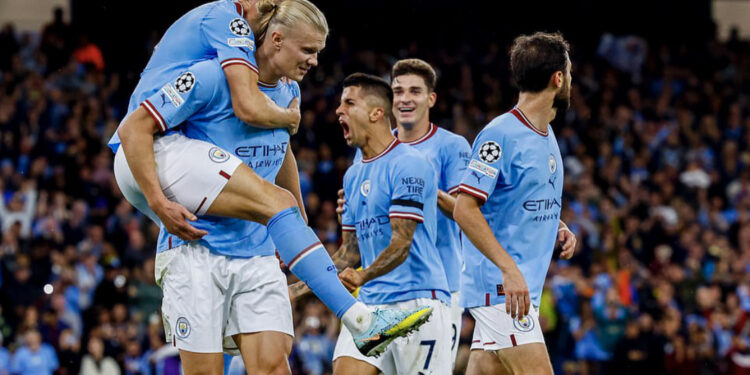 There will arrive a time, a night, when Erling Haaland is not the story. It will come, probably fleetingly. Just not yet. And not for a while either.

So, Haaland again. Six minutes from time, a volley to turn this game for Manchester City. Describing this as a mere volley probably doesn’t do the finish justice. Unfathomably acrobatic, one leg level with his head to meet Joao Cancelo’s impish cross, bringing the roof off the Etihad Stadium.

The man cannot be stopped. Not at home, not abroad – although Borussia Dortmund went so close against an individual who used to do all this for them up until a few months ago. They know better than anyone what invariably occurs when a ball is delivered into Haaland’s corridor. Bang, the game has gone. 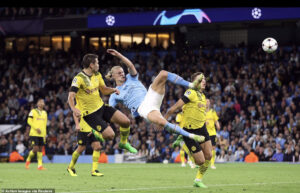 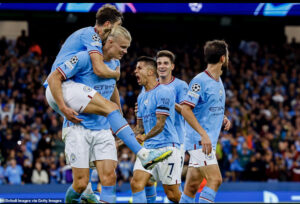 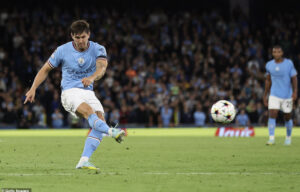 Yeah I knew it [would be him] to be honest,’ rued Jude Bellingham. Dejected and rightly so: he knows City got away with one Wednesday night. For a team so measured, so controlled, Pep Guardiola’s team possess this weird knack of rousing moments, improbable comebacks. They had not registered a shot on target until John Stones decided he would just whack one into the top corner from nowhere with 10 minutes remaining.

Dortmund’s goalkeeper, Alexander Meyer, may feel he ought to have stopped it but that Stones strike created the potential for a Haaland crescendo. What happened next left Dortmund, and their manager Edin Terzic, cold and wondering quite how that all transpired.

‘People know the influence Johan Cruyff had in my life – as a player, coach and mentor – and many years ago he scored an incredible goal in the Camp Nou for Barcelona against Atletico Madrid and Erling’s was quite similar. The moment he scored I thought, “ah Cruyff”. Exceptional. It’s nice he emulated him. Like my dear friend [Zlatan] Ibrahimovic too. He is elastic.

‘But we had a lot of problems in the game. We were so passive. We played in the wrong gear.’

Inspired by Bellingham, who scored 11 minutes into the second half, Dortmund forced those issues and had held City magnificently, leaving them bereft of ideas for a fair chunk of the evening.

Haaland went to every Dortmund player and coach at the end of this dramatic reunion with genuine warmth, just as Guardiola went to remonstrate with referee Daniele Orsato and earning a booking for his troubles. He later apologised.

Terzic had made a real point of not wanting to direct all of Dortmund’s focus on Haaland. Difficult not to, of course – particularly given what they know about him and that the wily Mats Hummels earned a recall after sitting out the last two certainly presented a point of interest.

The veteran’s central defensive partner and fellow Germany international, Niklas Sule, has some nous in his locker. There was one moment, about a third of the way in, when he stood immovable, intercepting Haaland as he powered into the away penalty area. Planted his right leg, pinched the ball and might as well have said ‘thank you very much’ as he made off with possession.

Sule had earlier nicked in to take Riyad Mahrez’s inviting cross right off Haaland’s head inside the six-yard box as well in a rare moment of City outmanoeuvring their drilled visitors. Salih Ozcan’s dipping effort from 20 yards was the closest Dortmund came before the break – Ederson pouching comfortably – and the move was all down to Bellingham.

The youngster oozes class, intelligent beyond his years and again a shining light – as he was when Dortmund went out at the quarter-final stage against City in 2021. Bellingham made the chance for Ozcan with poise in the middle of the park, shimmying through a crowd and calmly popping off for Raphael Guerreiro to gallivant forward from left back.

There with other instances where, when Dortmund came under fair pressure, that he expertly intercepted and got them moving in the opposite direction. Somebody is going to land a real player when he eventually returns to England.

Bellingham was later wheeling away in front of the travelling thousands, arms outstretched. Haaland had cleared Giovanni Reyna’s corner to Marco Reus on the edge of the box and the forward’s shot back where it came from found a Brummie nestled between two former team-mates. Haaland and Manuel Akanji could do nothing as Bellingham diverted the Reus shot beyond Ederson – his fourth goal in this competition, more than any other British teenager.

Haaland struck a post as City toiled but then it came, Stones from 25 yards. City were not done but Dortmund certainly were. Cancelo menaced from wide, a deep cross with the outside of his right foot in an area for Haaland to attack. You know the rest. 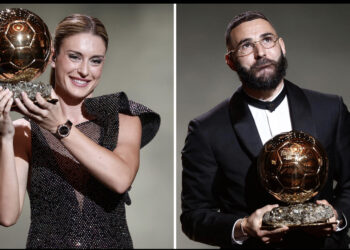 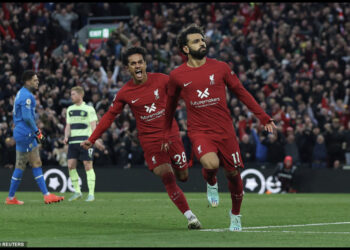