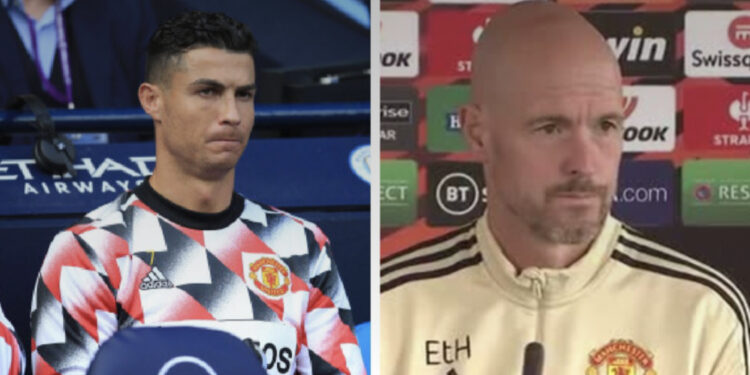 Manchester United were humbled by their “noisy neighbors” last weekend during the Manchester derby.The Reds were hammered 6-3, and were troubled all game by an impressive Erling Haaland, who scored his third consecutive hattrick at home in the Premier League.Turns out, he’s the first player to do it in Premier League history. Not bad.

As Haaland impressed on the pitch, the cameras frequently cut to the opposing team’s striker, Cristiano Ronaldo, who was clearly frustrated and unhappy as he watched on from the bench. What must he have been thinking as his team struggled to create chances- don’t let the three United goals deceive you- the Red Devils were extremely poor throughout the game in the final third of the pitch.

In a bizarre post-match press conference, ten Hag revealed that he decided not to bring Ronaldo on out of “respect” for his great career. In other words, the coach didn’t want to embarrass or humiliate one of the world’s greatest ever players. A quite frankly bizarre excuse.

Ten Hag has since shed some light on the player’s situation. In the pre-match Europa League press conference, Ten Hag revealed that Ronaldo is “not happy that he didn’t play on Sunday. Of course, he wants to play. And he’s pissed off when he’s doesn’t play. Yeah. Clear.”

Ronaldo wanted to leave the club in the summer transfer window but despite his wishes, ten Hag didn’t want him to stay. It’s proving to be a bizarre decision given Ronaldo has hardly played this season- most of his appearances have been from the bench. The Portuguese legend is right down the pecking order, behind Marcus Rashford and even Anthony Martial.

The Ronaldo soap opera continues and his situation is becoming more and more unsustainable. If the situation doesn’t change, Ronaldo will surely seek to leave the club this January, which would probably be best for both parties