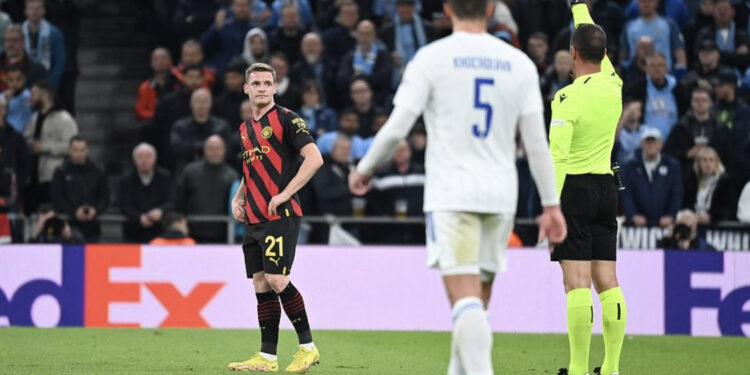 Manchester City were as disjointed as they have been this season, yet still emerged with a draw against Copenhagen that all but secures qualification from Champions League Group G. On a night when Erling Haaland was rested, after starting all of their previous 12 games, Pep Guardiola’s side did a rare thing: failed to score, though this and their lack of fluidity could be traced to Sergio Gómez’s first half sending-off following a VAR review in a 45 minutes dominated – and, perhaps, blighted – by the out-of-stadium official.

City also missed a penalty – Riyad Mahrez the culprit – but can be pleased with eking out a point that barring Sevilla, bottom of the standings, winning their last three matches, including by a high margin at the Etihad, means they travel to Liverpool on Sunday in relaxed mode.

This was a good workout for that challenge. Copenhagen were defiant throughout, as signalled by an early Hakon Arnar Haraldsson corner which was headed away by Kevin De Bruyne. Mohamed Daramy, another of the Danish attacking trident, was allowed to slalom along his left corridor before, this time, Ilkay Gündogan used his head to clear the No 15’s chip.

In between, Julián Álvarez’s angled shot from the left was tipped behind by Kamil Grabara, once of Liverpool, but no corner was awarded. This delighted the faithful in Parken Stadium as much as what occurred after Rodri rifled a superb volley beyond Grabara.

For a first time Artur Dias, the referee, was ordered to the pitchside monitor by the VAR and he crossed out the strike owing to a Mahrez handball before Álvarez’s lay-off. The latter was in the XI thanks to Guardiola giving the man-of-the-season (so far) a rest, maybe with the trip to Anfield in mind.

Despite being dismantled by the same opponent 5-0 last week Lukas Lerager further signalled Jacob Neestrup’s men were in a feisty mood, the midfielder’s 20-yard effort needing a timely Ederson hand to deflect it out. When Haraldsson flighted in the subsequent corner every City defender was caught ball-watching and the Brazilian – again – had to save his team.

His opposite number, Grabara, did the same when Nicolai Boilesen was adjudged to have handled – again by Dias, again via the touchline TV – from a Mahrez corner and the referee pointed to the spot. The Algerian’s effort was to the goalkeeper’s right but he flung himself in the way to save impressively.

VAR and the pitchside monitor’s busy evening now had its third moment when Dias was told to review Gómez’s challenge on Haraldsson. The Spaniard was the last man and when the referee finally did watch replays of the incident – he had allowed play to continue for some seconds – a free-kick was given and the red card raised over the left-back who ambled off with little complaint.

Cue Guardiola sacrificing Mahrez in a defensive rejig that had Rúben Dias coming on to operate in a three-man rearguard, as Manuel Akanji went to right wing-back and João Cancelo to this same role on the left. This was all ragged by the perfectionist standards of City, whose manager will have been displeased but, then, heartened regarding how his men rallied to end the period on top, despite being down to 10.

Guardiola resisted introducing Haaland for the second half’s start – and would until the final whistle. The noise inside the venue remained vibrant and raucous, the home fans raising the volume when two corners in quick succession were claimed as City were pinned back. Guardiola’s side ooze quality, of course, so there was no surprise to see Cancelo, Álvarez and De Bruyne skate upfield and engineer an opening for the peerless Belgian to test Grabara with a cut and curled attempt from range.

“Spirited” was an apt characterisation of each team. Duramy, along Copenhagen’s left, looked to get at Dias when he could, embodying his side’s approach as, too, did Jack Grealish whose bursts of pace moved City the other way – the winger, in one moment, creating a chance for De Bruyne who blazed disappointingly into the side-netting.

City’s instinct to rove forward had them still threatening Grabara’s goal as the seconds ticked on, Álvarez rising near the goalkeeper’s right post to steer a free header off target, while Marko Stamenic’s late 20-yard shot, though wide, was illustrative of how Copenhagen fought all night.

Before kick-off their fans had sang a ditty to the tune of the Boomtown Rats’ “I don’t like Mondays”. By the end the visitors were quite partial to this Tuesday as this was job virtually done in a streetwise offering that showed how shrewd City now are in the elite continental competition.

There will be far tougher challenges to come but, at the end of the match, they walked off content and so move on to facing Jürgen Klopp’s men which Guardiola at the weekend described as always being City’s litmus test. 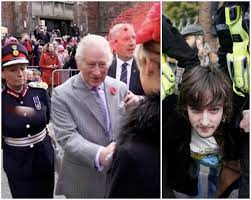 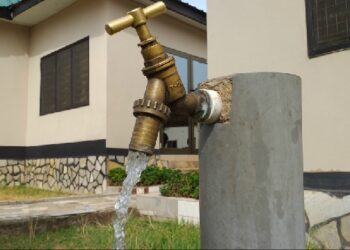 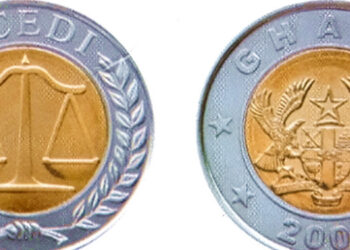