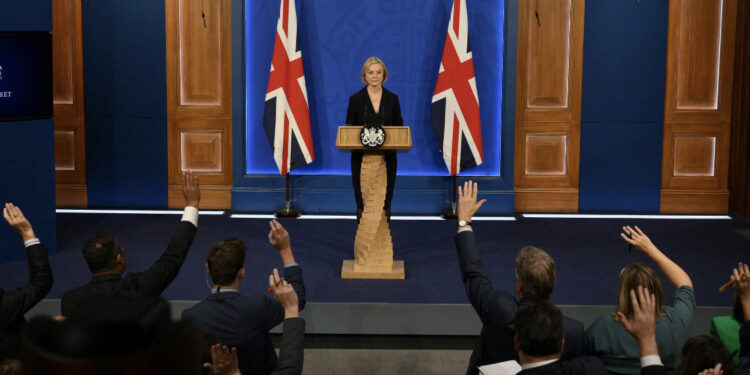 Liz Truss has been prime minister for 39 days but her political future remains far from certain following a 24 hours in which she sacked Kwasi Kwarteng as chancellor, appointed Jeremy Hunt as his replacement and abandoned a flagship policy.

The announcement that corporation tax will rise next year (as planned by the previous government) rather than remain at 19% was intended to calm the markets following weeks of turmoil brought on by the mini-budget. Yet experts warn the new chancellor may still need to find £40bn in spending cuts to makeggg the prime minister’s current policies viable.

As my colleagues report, Truss said said staying in her position as prime minister would help to “reassure the markets of our financial discipline”, but the cost of government borrowing rose and the pound fell following her press conference announcing the changes.

Senior Conservative MPs are plotting how to remove her from office, with some mulling whether to publicly call for her to resign in the coming days. One former cabinet minister said they thought it was “50/50 whether she will make it till Christmas”, adding: “If I could wave a magic wand and get rid of her now then I would, but the problem is the mechanism.”

Labour, meanwhile, is calling for a general election whether Truss stays or goes. Speaking to the Guardian, the party’s leader, Sir Keir Starmer, said:

Change in personnel at the top of the Tory party is not the change we need. We need a change of government.

We are in the absurd situation where we are on the third, fourth prime minister in six years and within weeks we have a got a prime minister who has the worst reputational ratings of any prime minister pretty well in history.

Their party is completely exhausted and clapped out. It has got no ideas, it can’t face the future and it has left the UK in a defensive crouch where we are not facing the challenges of the future because we haven’t got a government that could lead us to the future.

For the good of the country we need a general election.

Stick with us for all the latest political developments throughout the day.

‘This daughter of immigrants needs no lectures from the north London, metropolitan, liberal elite’: Home Secretary Priti Patel vows to end freedom of movement ‘once and for all’ after Brexit

‘It’s wishful thinking… probably by yourself’: Bad-tempered Jeremy Corbyn clashes with BBC’s Andrew Marr as he DENIES he is about to quit amid meltdown among aides and backlash over muddled Brexit stance