No Rivalry Between Ewes, Asantes‘ 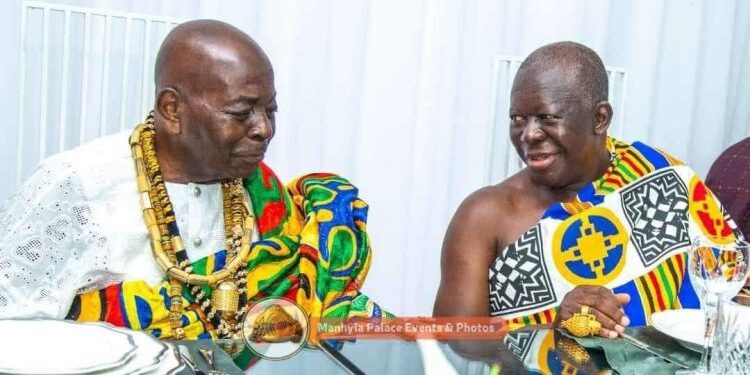 The Asantehene and Awomefia have debunked what they described as misconceptions created by politicians and other persons with parochial interests that; the two kingdoms are enemies.

According to the two monarchs, the Anlos and the Asantes have always been friends and have a bond that spans centuries.

However, it is the political and other interests of persons hoping to benefit from destabilising them that have orchestrated the idea of rivalry among them and Ghanaians at large.

The two, set the record straight when the Asantehene, Otumfour Osei Tutu II joined the Awoamefia of the Anlo State, Torgbui Sri III to celebrate this year’s Hogbetsotso Festival.

Hogbetsotso means Exodus as it commemorates the journey of the Anlos and many Ewes from Nortsie in the Republic of Togo many centuries ago.

The festival was instituted 60 years ago and is always climaxed in Anloga, the ancestral capital of the Anlo people. The Anlo people span 36 towns in 6 districts in the Volta Region.

This year’s celebration is on the theme “60 Years of Anlo Hogbetsotso Za: Uniting for development, sustaining our unique cultural commonwealth for future generations.”

The Asantehene in his speech declared that the Asante-Anlo alliance which was struck in 1869 still stands. He, therefore, declared that “Asante stands together in friendship and solidarity with Anlo in the spirit and letter of the alliance signed by our ancestors.”

He added that since Asanteman does not go back on its words and does not renege on its commitment, as the bond of the two kingdoms was, so shall it be today and forever.

It is for this reason that Asanteman has an Anloga Divison in his kingdom as part of measures to ensure all ethnic groups in Asante are well represented in decision-making and treated equally.

Despite these collaborations and initiatives, it is unfortunate that the excesses of modern politics have spilled over to distort the traditional and true relationship between ethnic groups in the country.

The Awomefia of Anlo, Torgbui Sri III in responding also stressed that the time has come for the sons and daughters of Anlo to come to terms with the fact that Ewes and Asantes and for that matter, Akans are one people.

He stressed that traditional leaders must do well to lead by example to ensure Ghanaians rise above political differences and treat each other with respect and love.

The Ga Mantse, King Tackie Teiko Tsuru II commended the Awomefia and Anlo State for remaining good allies with the Gas. He also recounted the long-standing relationship and added that traditional leaders are key in ensuring unity, peace, and development in Ghana.

The Vice President, Dr. Mahamudu Bawumia also commended the monarchs for leading the way and strengthening the bonds and unity among Ghanaians.

He acknowledged the current economic challenges facing the country but assured that the government is doing everything in its power to improve the situation.

Be that as it may, he enumerates the several initiatives of the government. Some of these include Free SHS, 1 district 1 factory, plants for food, and jobs among others.

For some reason, some of the crowd were unenthusiastic by the narration as they claim it is becoming a cliche.

This year’s Hogbetsotso has been described by many as the biggest with thousands of people thronging the Keta and Anlo districts, the melting pot of the celebrations.

To further strengthen the band between Asanteman and Anlo, the Asantehene presented a stool with a silver emblem of the Asante Kingdom on it. He also presented another gift packaged in a box engraved with the Asante emblem.