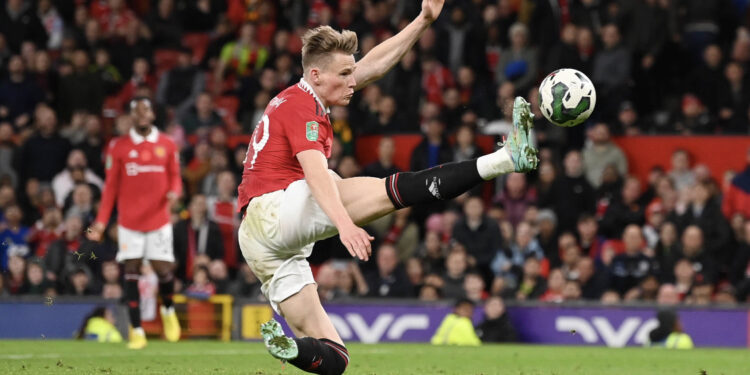 Manchester United and Aston Villa produced a borefest before the break and a classic cup thriller after the half-time oranges which featured six goals and ended with the effervescent substitute Alejandro Garnacho creating the Bruno Fernandes and Scott McTominay strikes that took Erik ten Hag’s team into the last 16, where they will face Burnley.

Robin Olsen was Villa’s culprit for the Fernandes goal that made it 3-2: the goalkeeper’s slipshod pass went straight to Garnacho and after Fernandes collected from the winger his effort deflected in off Tyrone Mings. Then, in added time, McTominay slid home from Garnacho’s sweetly flighted ball.

Of the 18-year-old Garnacho, Ten Hag said: “He has an impact with two assists, some dribbles, some runs behind but also some things he has to improve but it is quite obvious we are happy with his development and performance tonight, and he can contribute to the team. All teams need players like [him] – he can outplay them and [in] the final decisions he can do the right things. Also he can do the defending stuff and keep discipline.”

Ten Hag was pleased, too, with Marcus Rashford’s World Cup selection after he scored his eighth goal of the season. “It is really important – and I am really happy for all the players who go to the World Cup – it is great, the more players for us the better,” said the Dutchman.

United’s mission to avenge Sunday’s insipid 3-1 Premier League defeat at Villa featured Anthony Martial as the attacking spearhead in only his second start of an injury-blighted campaign and his early touch was sharp: twice the ball was bounced in to him and twice he feathered it to a colleague.

There was smoothness, too, in a United corner routine that featured Fernandes laying the ball short to Rashford whose cross landed on Harry Maguire’s head.

Unai Emery’s team grasped for ideas in possession and suddenly they were being turned. Fernandes’s ball to Rashford was given to Tyrell Malacia on the overlap and his cross was headed, via a deflection, by Diogo Dalot on to the roof of Olsen’s net.

The contest was a test of United’s ability to break their opponents down and Villa’s prowess at counterattacking to expose Maguire and the rest of the backline. It was surprising, then, when Ludwig Augustinsson created Villa’s best moment while camped inside United’s half. He won a corner on the left which Douglas Luiz appeared to be sending straight in until McTominay headed clear from under the bar.

A second corner followed and this time, when the delivery pinballed out of the area, Ashley Young unloaded a volley that was always missing. Villa were soon back inside their territory, gratefully watching Malacia hit the ball out, a Fernandes backheel amount to nothing and Rashford waste a 20-yard free-kick as an aimless first half ended.

The second period, surely, might be less humdrum: this was the hope and this was precisely what occurred as in a breathless 60 seconds Villa surged ahead before United pegged them back. First, the home side thought Boubacar Kamara handballed after he claimed the ball and fed Jacob Ramsey, who unlocked United’s rearguard with a pass that sent Ollie Watkins rushing forward to dink the opener over Martin Dubravka. After United complaints faded and they restarted, Dalot instantly released Fernandes down the right and his weighted ball was steered home by Martial.

Suddenly – and thankfully – the tie was alive, the crowd’s vibrancy upping the Old Trafford volume as both sides hurtled at each other at pace. Emery made changes, one of whom, Leon Bailey, was instrumental in Villa retaking the lead. Young padded forward and floated the ball towards the back post and the forward, 90 seconds after entering, headed at goal. Dalot attempted to clear but could only beat Dubravka.

Rashford spurned a gilded chance to register United’s second equaliser by blasting wide before making amends. The unfortunate Mings slipped and Rashford shrugged off Calum Chambers to rifle in. Mings, who failed to make Gareth Southgate’s World Cup squad, suffered further pain as his leg unintentionally helped Fernandes’s strike beat the hapless Olsen. In the 91st minute McTominay then made no mistake to leave the home support jubilant.

Of his World Cup call-up A a delighted Rashford said: “It was this morning [when he found out] – if you are performing at United then England will be round the corner. It will be a massive month for us, I am looking forward to that.”