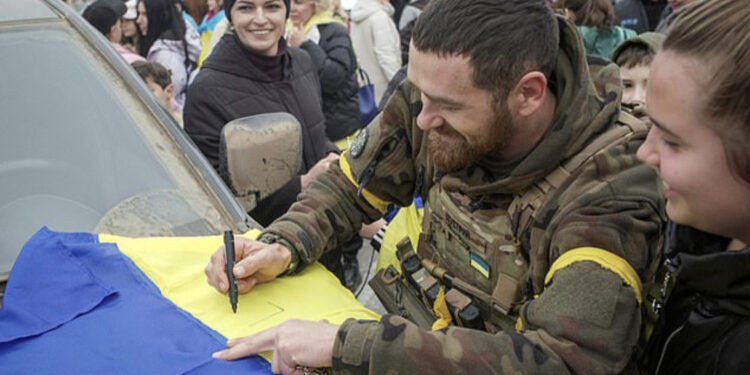 Russian president Vladimir Putin is ‘to strip passports of citizens who criticise Russia’s war with Ukraine’ just days after the humiliating withdrawal of his troops from Kherson.

In March, Russian parliament brought in laws that criminalised protesting the conflict in Ukraine and ‘discrediting’ Russia’s army. Those who disobeyed were told they could face up to 15 years in prison.

And now, Putin is reportedly proposing changes to a bill which will target non-birth citizens who acquired Russian passports during the occupation of the key southern city by Moscow forces.

Many Ukrainians were either forced or had no choice to switch their nationality due to Russian threats, the Kyiv Independent reports.

The actions that will be considered a crime are ‘discrediting the Russian army’, ‘spreading fake news’ and ‘participation in the activities of an undesirable organisation’, Russian independent media outlet Meduza reported, citing a Kremlin-run news agency.

The amendments were proposed to a bill that has only been passed through the first reading so far.

The southern city was the sole regional capital that Kremlin forces had managed to seize since the beginning of Putin’s invasion in February.

In what appeared to be a final act of retaliation, Moscow troops blew up the Nova Kakhovka dam as they retreated across the Dnipro River, as well as allegedly destroying the Antonovsky Bridge, which is the other main crossing point over the river in the Kherson region.

It is not known whether the destruction was carried out in revenge for having to retreat or a tactical move to prevent Ukrainian troops surging after the Russian forces – Putin is yet to comment publicly on the action.

One Ukrainian official described the situation in Kherson as ‘a humanitarian catastrophe’.

‘I don’t understand what kind of people this is. I don’t know why they did it,’ resident Yevhen Teliezhenko, draped in a Ukrainian flag, said.

Still, he added, ‘it became easier to breathe’ once the Russians had gone.

‘There is no better holiday than what’s happening now,’ he declared.

Ukrainian troops were greeted by jubilant civilians cheering and waving flags as they arrived in Kherson last week.

It signalled an end to the brutal Russian occupation that had been in place since February, with phone and internet connections restored, allowing people to phone worried relatives living outside the city for the first time in months.

Russian flags were torn down outside administrative buildings and replaced with the yellow and blue of Ukraine, with videos showing tearful citizens thanking soldiers.

Flag-waving locals wept, chanted the name of the Ukrainian armed forces, hugged and kissed troops as they arrived in the city’s main square.

Speaking the last night, a defiant Volodymyr Zelensky said his troops were already in the process of making the area safe and dealing with dangers left behind by the Russians.

‘Our explosive experts have a lot of work everywhere in the freed territory. Almost 2,000 explosive items have already been removed, mines, tripwires, unexploded ammunition.

‘Before fleeing from Kherson the occupiers destroyed critical infrastructure, communications, supply of water, heat, electricity. Russian forces everywhere have the same goal – maximum mockery of people. But we will restore everything, believe me.’

He added that fierce fighting in the Donetsk region was continuing to take place, but vowed his forces would not stop until all Ukrainian territory is retaken.

‘Although it takes time, but everyone already understands the result will be ours, the Ukrainian,’ he said.

‘And especially these are words of gratitude to those who endure Russian attacks in the Donetsk region – it is just hell there. There are extremely fierce battles there every day. But our units defend bravely, withstand the terrible pressure of the occupiers, maintain our defence lines. This is very important.

‘Due to strong defence there, in Donetsk region, we can conduct offensive operations in other directions. I thank all our soldiers who are defending Ukraine in these particularly tough battles.

‘Today we all feel elation together. I don’t know if there is anyone here who hasn’t watched the video of our Kherson residents greeting Ukrainian. Months of Russian occupation, months of mockery of our people, months of stories that Russia is allegedly there forever. And still there is a sea of Ukrainian flags on the streets.

‘People did not even think of giving up on Ukraine. And the world sees it now. It sees what it means when Ukrainians meet their own. It sees what the unity of Ukrainians means. And they see why we must free our entire land from the occupiers.

‘It will be the same in Henichesk and Melitopol. We will come to all our cities and villages of Donbas. We will definitely see how Ukrainian forces will be met in Crimea with Ukrainian flags which are kept there, which will be on the streets in hundreds on the day of liberation.’ 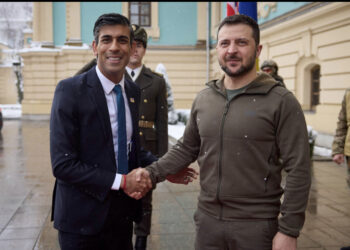 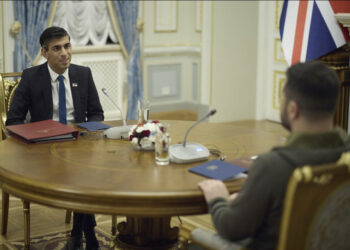 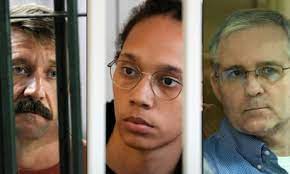